This is a quick update on using Twitter and gaining followers. I recently completed a little experiment in trying to obtain relevant followers. I did cover this in my last Twitter article but this is a new approach.

I targeted a well known 40K player on Twitter and went through all their followers. By doing this I was targeting people who are interested in his work, so they could be interested in my content too. Its a theory and its better than nothing. So I went through this user’s followers trying to identify other hobbyists, I followed around 40 in all. Thats around a 5% gain on top of the people I already follow.

Of those 40 around 6 followed me back, a success rate of 15% which is pretty great really.

Using hash tag searches such as #wh40k, you’re able to find decent 40K users, tweets and photos. For more info on hash tags see part 2. Once you have found a decent piece of content check out the other users who have engaged with it via favourites and retweets. Its highly likely they are also interested in your content. By giving them a follow and getting on their radar they may just follow you back.

Using this method I selected a single tweet with 7 favourites, I then followed all those people. All 7 followed me back, thats a success rate of 100%! That is better than BS10!

Both methods are great, the latter appears to perform better as its more targeted. Although you’re limiting yourself to the number of potential follow backs the likelihood of them following you back is much higher. The images below show how you go about showing retweets and favourites on Twitter.com. Thanks to @EGiNcontroL for posting his lovely photo of Orks beings killed by ‘Nids used for the demo images. 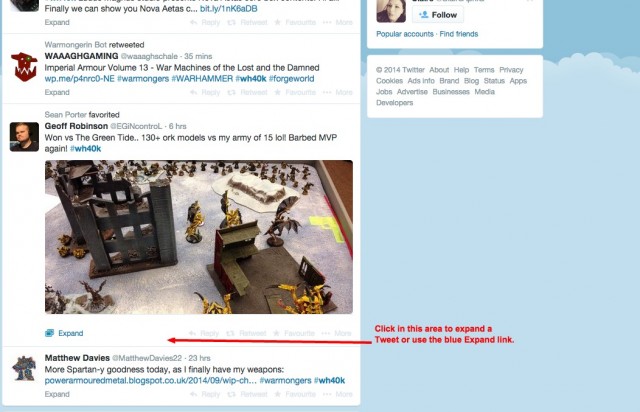 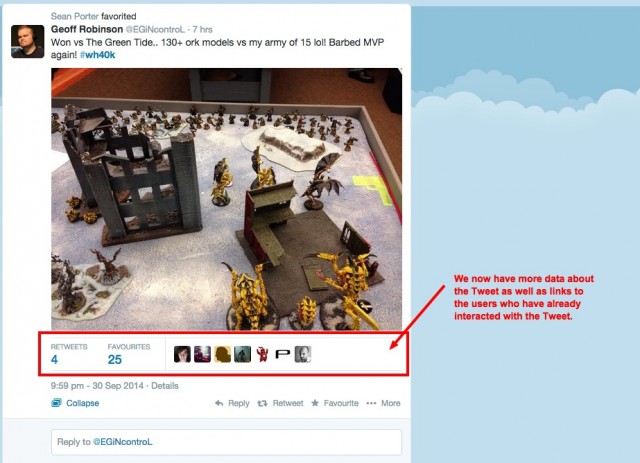