My series of social media articles seems to have been a success and I’ve been told so a few times, which is fantastic. Thank you, really thank you to all those who’ve used it and had some success with it.

But I’d feel like I wasn’t doing the series justice if I didn’t test my own advice out. I should practice what I preach and I largely do with @CadianShock. Although sometimes I get side tracked and break my own rules!

Recently a new user was looking over my series and said they’d not bothered with Twitter because their Kick Starter campaign had only two weeks left and that it wasn’t worth setting up Twitter for those two weeks. That sounded like a challenge to me!

In response I said that using my guide he’d be able to get 100 followers in two weeks. Thinking about this further though I wasn’t really sure if that was possible at all or if it’s a vast underestimate. So today, May 30th at 9AM ish (GMT + 1) I set up a new account. This blog article has been scheduled to be published in two weeks exactly from May 30th – on a Saturday morning.

I’d originally included the name of this account and a link, then I removed it and now I am adding it back in! But I thought that removing it might be interesting to keep people guessing as to the success of this exercise, but waiting two weeks for that outcome isn’t fun. Plus people may turn off from this exercise in those two weeks and not be interested by the end! The account is @40kassassin.

If you’ve not subscribed to this blog yet then the suspense of this series should be reason enough!? 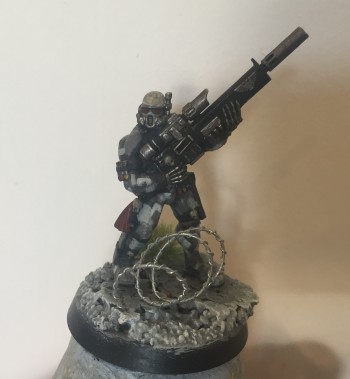 I apologise sincerely if this seems deceptive for those who’ve followed this Twitter account and/or interacted with it, I didn’t feel great about that aspect of it, but hopefully the ends justify the means. I’m hoping this exercise will show me how my own advice works (or doesn’t) for those new (and old) to Twitter. This will in turn enable me to tweak that advice and help all current and future #warmongers to further our reach on Twitter. Because, let’s be honest, the #warmongers community on Twitter contains the best of all the hobby people on the internets!

Now the exercise is over I will stop using that account and continue to use my own Cadian Shock account. Its been very odd doing this and being a fake person, I really do not know how Trolls do it. So please accept my apologies for this exercise I hope its not offended anyone.

And So We Begin

During these first two days I’ve not managed to do much at all as I was away for the weekend. And it’s good to post some interesting tweets and photos before going on the rampage for new followers. I’m aiming to get relevant followers too, people interested in 40K primarily rather than anyone who follows for a follow back.

But before I start really trying with this account I need to get my cover photo and profile image sorted. This is often the first glimpse someone gets into your account. If it’s blank then it doesn’t look great, if it’s of a 40K model then it will help a lot, as other 40K-ers will recognise it and are more likely to give you a follow.

My next article will be in a day or two and will cover my first few days on the account.

Finally, thanks for @tabletopbanter for being my first follower!

Now to manage two accounts without slipping up and giving the game away!