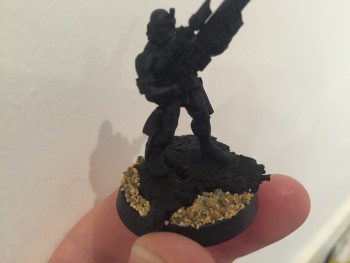 So it’s now the Monday evening, three days after setting up my new account and total followers still stands at one. Why? Because I’ve done nothing.

I wanted to have a picture of a mini up by now but it’s tipping it down with rain at the moment and I’m only able to spray outside at the moment. Aerosols inside isn’t good for one’s relationship, or a small child! I wanted to spray the model because I’ve actually posted a picture of it already on Cadian Shock’s Facebook page and Twitter account but with no spray. Priming it should put some distance between Cadian Shock and my new account so that keen eyes on Twitter or Facebook won’t notice they’re the same mini!

All this has a point though I’ll say this, you need to do stuff in order to get noticed and be followed. Text only tweets about hobby progress or just question asking won’t be enough to gain a significant amount of followers. Posting imagery is a great way of increasing engagement and it’s something everyone has access too. Our hobby is very visual so getting photos taken and online is easy, providing it’s not raining and you can actually make progress.

I have a game tomorrow night so painting isn’t going to be an option then either. I’m going to have to get my skates on with this little challenge of mine!

So it stopped raining and I managed to get outside to prime the mini, post it on Twitter and make it my profile picture. I used the #warmongers hash tag and the @tabletopbot ReTweeted it for me.

I also followed ten accounts, Favourited and ReTweeted a selection of image based tweets too.

I am going to keep the account open, I won’t post to it but it will be a record of this exercise so @40kassassin is here to stay.