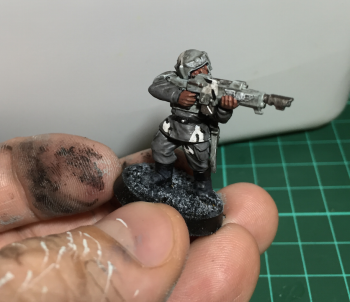 I am not great at the Meta game; knowing all the best unit combos, all the best buffs, etc. I build my lists for fun mainly and not usually to win. hey also get built on what I own of course! I play to play – not to solely win. But today I wanted to take a look at the lasgun against the shotgun. Every time I do my lists and I add a veteran squad I see the option to swap out the lasgun for the shotgun. I have not taken this step yet and I wanted to think through the two options before I made the change. The other reason is that I don’t have shotgun models, yet.

The weapon profiles for each are very similar;

My thoughts on these two weapons has been fairly simple, never take shotguns in a regular game of 40K. Their shorter range means that they are going to be fairly ineffective on a larger battle field. It also means that if you’re taking them then you’re probably going to be using them in close combat, because they are assault 2.  But Guard being Guard they are not the best in melee so the chances are they’re going to die against whatever they come up against. Your opponent will sight the Shotguns, note their assault 2 and send in their decent melee troops to kill them off before they have chance to do the task you had planned for them. The lasgun is a much more useful option in regular 40K games, its longer ranger and rapid fire at 12″ mean that its much more versatile on a large battle field.

The only really serious place that I would take shotguns is in Kill Team. The shotguns lend themselves much better to a densely packed table of terrain as you can more effectively pick when your models are exposed to your opponents models and ensure that you are in range. This also means you can more effectively pick which models get close enough for assault as each model is an individual who can move independently from his squad mates. Your shotgun models can move forward and be covered by your lasgun models. That isn’t such a viable option in a regular games as the squad moves together and so you would need an entirely different squad dedicated to cover your shotgun models as they move forward.