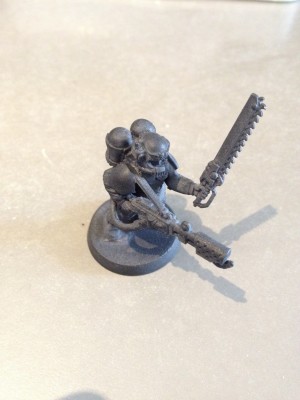 This guy needs his own rule similar to “Gets Hot”, it’d be called “Opps, I Tripped”

What your thoughts on second hand models?

I don’t mean commissioned paint jobs or models you buy for the pro paint job. I mean models that are used, badly painted, base coated or part built rejects.

Coming into the hobby after a long break has been interesting. Back when I gave it up eBay was just starting out and that’s how I sold my Games Workshop models. I don’t think I ever bought anything second hand back then.

Now eBay seems to be alive with models.

Where I stand on the matter is still unclear. I have bought some models second hand (all un-painted), I can’t help but think I’m cheating. As part of the hobby and enjoyment is the building, tweaking and the feeling of I did that.

I recently bought a Hellhound body, built for £6. That left me to source the turret only and I had myself a bargain.

I also bought a built Basilisk. This was £16, but on arrival it was broken into the track sections, gun section and the body. Along with other busted bits like the barrel door and smoke launchers. After some haggling I got a £10 refund. I still had to rebuild it but another bargain at £6.

Some models that come in job lots (loads of infantry) have some order combinations of weaponry. Like the flamer chainsword guy pictured!

Do you buy second models, or do you steer well clear? Have you found some bargains or had awful experience from purchasing second hand?