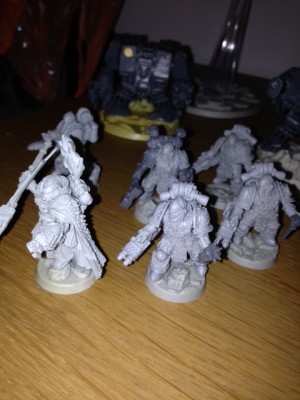 I have a game sometime this year with an old friend from university. A date hasn’t been set but we are going to play once we get around to it, we live 120 miles away from each other you see.

He plays Salamanders with drop pods containing meltas and flamers – this he has told me. For those that don’t know Salamanders can re-roll their saving throws from flamer weapons they also re-roll failed wounds they make with flamer weapons and they re-roll failed armour penetration rolls. Smells like OP to me, but that’s a whole other post. This is to some extent list tailoring which isn’t great, but I haven’t played a decently sized game against Space Marines before and the main thing I’ll be focussing on is dealing with their armour. So it’s more about an anti Space Marine list than a list tailored for my friends strategy.

So what to do, what to do. The Emperor’s aides have said to just throw more men at them. Two full platoons should just about cover it I am sure, but I’m not even convinced that will work, if things get to melee I may well loose there too. So I’d like some help with a list to counter Marines.

The main issues I see myself taking on against these Salamanders is that my guys will die very easily to flamer templates and re-rolling meltas will take apart my vehicles with ease. I can’t counter that with models with high armour saves, remember this is the Imperial Guard we are taking about! A Leman Russ has AV14 on the front which is beastly, but with the Marines Deep Striking that AV14 could be quickly undone and useless. We need a cunning plan!

This is my take on the situation and how I plan on undoing the Salamanders and their armour save, plus how to counter their ability to re-roll already effective weapons against my weak, but willing, Guard army.

It’s this, set a trap, of sorts. It’s more elaborate than it needs to be really and more high risk – but it’ll be fun! Use his advantage to my advantage, I’ll roll with his punch.

The Deep Striking forces will need to be placed into specific positions in order to maximise their special weapons. Meltas for vehicles and flamers for infantry. Drop Podding these troops into the wrong place would mean disaster as those are units he’s presumably relying on, they’d be wasted in the wrong place on the battle field. Well, I can’t make him Deep Strike them into his table half so I’ll have to create some juicy drop zones for him, but then make him fight on my terms.

It’s going to take some effective shooting with AP3 weapons to ensure the Marines go down and stay down. Smells like a job for Veterans, in Chimeras coming in from reserve! Vets to save the day!

I do not know how many pods he has, let’s assume three – is that realistic? One with flamers, one with meltas and then one is unknown which could be either configuration of re-rolling doom.

I want to force his pods into certain positions where they would be effective, but with limited success, for a single turn only. If I was able to predict where his pods will land in order to maximise their weaponry I could ensure the only thing he could kill was normal Guardsmen or a lowly, cheap Sentinel. I could then use a Regimental Adviser and a lucky Warlord Trait to increase my reserve rolls and hopefully bring on my Veterans in Chimeras in turn two. I’d bring them on right next to the Salamanders and ensure they were equipped to deal with the threat.

This is of course ignoring the tactics of creating drop pod sized holes for him to slip into and be unable to disembark from. If I did that then any Veterans coming in from reaver may have a hard time getting to their targets and may end up shooting through other units this granting him a cover save.

Both types of Salamander squad, flamer and melta will have an armour save of 3+, the unit’s weapons don’t really matter here, their really good armour does though.

So the tools for the job will be plasma guns, melta guns, plasma pistols and the heavy weapon choice, lascannons. I have plenty of other AP1 weapons too but they are not as flexible as when equipped to Veterans. For example a Leman Russ Executioner would be nice but that potentially means placing it in harms way as well as opening up the possibility of plasma engulfing my own men due to scatter. And the Basilisk is even more hairy/useless in close quarters.

Veterans are capable of taking up to three special weapons, so each squad can have three plasma guns for example, they can also take along with that a heavy weapon, a lascannon for instance. This leaves fours guys with lasguns and the sergeant with a plasma pistol. That’s an amazing amount of firepower for a Guard squad of ten, they have five shots with a low enough AP to ignore a Marine’s armour and wound on 2+, plus at close range with rapid fire that increases to eight shots (from the plasma guns). Of course they won’t all hit but the ones that do will have a very good chance of killing.

I have ruled out taking a Special Weapons Squad for this task, while cheap and they can pack a punch their BS3 doesn’t really feel like it will pay off when things get messy. Perhaps I am wrong and the more AP3 and below weapons the better regardless of their ability to hit?

We also have a nice alternative with Storm Troopers and their hot shot weaponry which is AP3, these will ignore the armour but wounding is going to be tough going with S3. They can lay down a decent number of shots but I don’t think they are going t be worth it when compared to Veterans.

Now this, this I really like. Bringing Veterans or Storm Troopers is nice but it doesn’t really say “f*** you” like three Bane Wolf will. The Salamanders, their weapons and their chapter tactics are a really effective way of screwing you up, there isn’t really a feeling of “this might work”. Those guys will kill me and ruin my day they are death machines.

The counter to this is Bane Wolves, poison 2+, template, fast, AP3 and coming in from reserve. This feels like a proper counter attack not a half hearted attempt by infantry but a true and meaningful force of death. I only have one though, not three.

We can safely assume that there will be some buffs I can take to help my infantry with their important task. Firstly there are the orders. First Rank Fire, Second Rank Fire seems an obvious choice to help those lasguns along in their task, although its probably wish thinking that these will have any real effect. The Take Aim order seems like it may come in handy as it gives my guys Precision Shot and thus the ability to pick off those pesky melta and flamer wielding Salamanders on a roll of a 6. The rest of the orders seem useless against my foe.

I have some thoughts and ideas, but these need to be critiqued, tweaked and corrected. I would really like some input on this subject, so if you have 2 cents to share – share it!