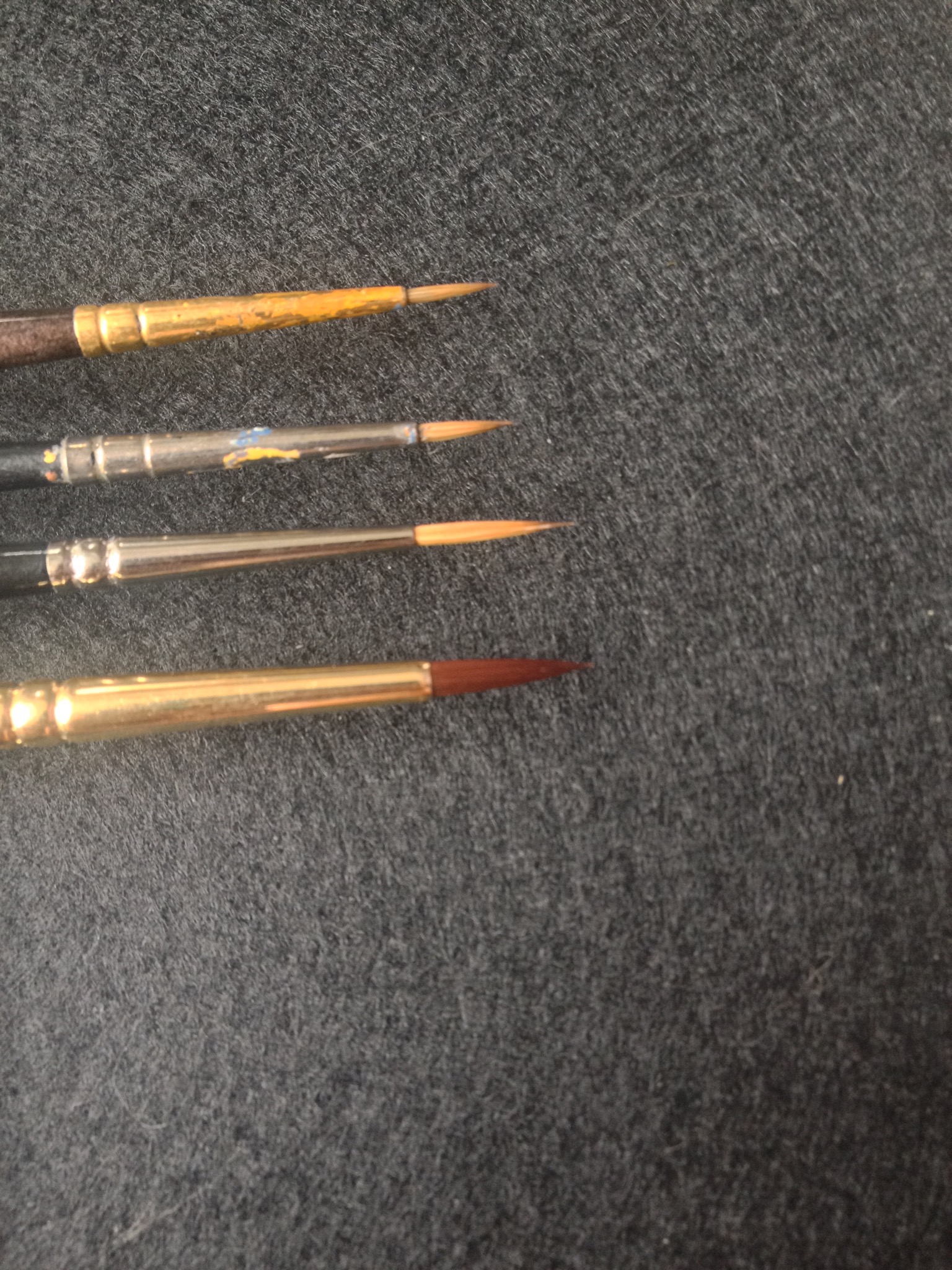 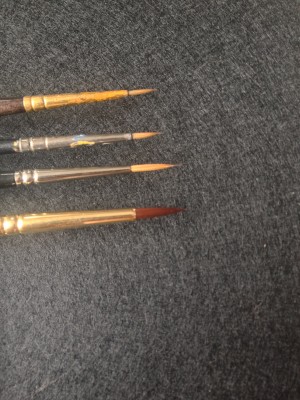 Thank you Wolfsherz for providing this Rosemary & Co brush review. I know that a few people from the #warmongers community on Twitter wanted a review on these brushes and Wolfsherz was the man for the job! So without further waffle from myself I will hand you over.

After my old, well-served Da Vinci Harbin Kolinsky died a slow death it was time to look around for some new brushes. By chance I stumbled across these brushes on Twitter by Rosemary & Co. Since the reactions were very positive on Twitter I decided to order my next brush from them.

I ordered the following brushes in sizes # 0 and # 1 of the following kinds Shiraz Pointed Rounds and Series 33. Pure Kolinsky Pointed.

Registering with Rosemary & Co was easy and worked without any problems. I was impressed by the quick order processing. From the confirmation email to processing of the order it took less than 15 minutes. Early next morning the whole package was already in the mail. As selected “Royal Mail Signed For” as my delivery method. It took about six days to ship the brushes from the UK to Germany which is quite fast in my opinion.

The brushes were wrapped in a cardboard box and secured with a rubber band. A catalog was added to the package. The catalogue was surprisingly interesting because it covers the production of brushes and also give some tips on the care of the brushes. So the reading is really worthwhile.

As a comparison, I want to consult a list of well known brushes. Prices below are based on the size #1. In no particular order.

Except for the Windsor & Newton, which cost well above average, the rest is priced about the same. I know that I compare in some cases apples with oranges when it comes to quality. I have added the Shiraz to the comparison for the sake of completeness, even if it is made of synthetic hair and the use of it is not comparable with the other brushes.

Both brushes are a little bit broader after the metal crimp and are good in the hand. I also like the overall length of the brush. Its neither too short or too long. The weight of the timber body is average .

There is actually not much to say and we just let the pictures speak for itself. The differences should be obvious.

Before I bought the brushes from Rosemary & Co, I painted with “Da Vinci Harbin Kolinsky 1526Y” brushes and I was quite satisfied with them. After more than a year of use the brushes are still in relatively good condition.

Striking in comparison to Harbin Kolinsky, it certainly has a relatively long body brush. This may, if one is rather used to short brushes, be a bit daunting at first, but one gets used to it. The advantage of the larger brush body is, assuming thin paint, that the brush can hold much more color and can deliver it evenly. The brush flexes easily while painting and feels rather soft. If you like hard brushes you will not be happy with the Series 33. So far, the brush is excellent at retaining shape and the point remains sharp. Since I only used the brush for a few days I cannot say how they will perform in the future.

The Shiraz is, as I have described above, not comparable neither in the form of its belly nor in the type of its hair with the Series 33. Nevertheless, I’ll take the Series 33 as an example to explain the differences. The first difference lies in the material. Unlike the Series 33 for the Shiraz synthetic hair was used. The next difference is that the brush with the same length is much wider at the base and looks larger. Like the Series 33 their brush has a rather fine point at the tip. Through its shape it can hold significantly more liquid and therefore is more suitable for rather large areas. The fine point but can however certainly paint edges and coarse details. Another significant difference is that the brush feels significantly harder while painting. Pushing it through it swings back quite strongly.

All in all I do not regret buying both brushes. Solely the Shiraz I would order in 00 for the next time. I will write another review in a few months to tell you how the brushes have done over time. 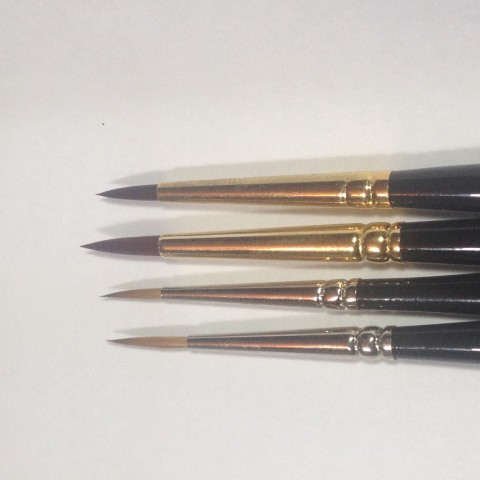 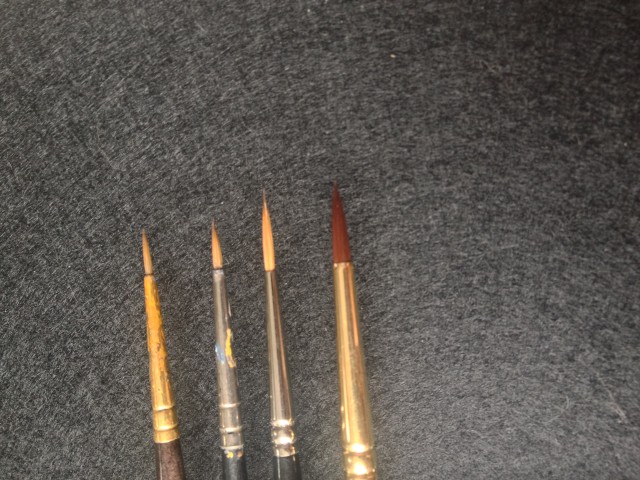 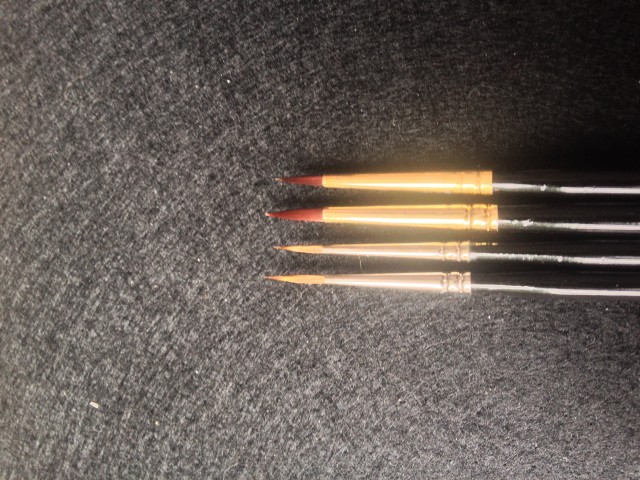