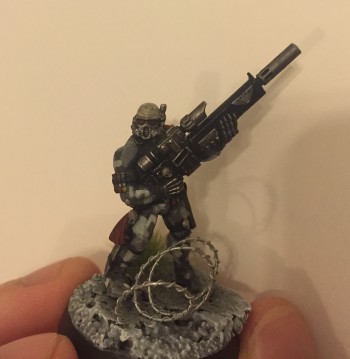 So my two week exercise is complete, testing my Twitter advice, I can now fully reveal my Vindicare Assassin.

I’ve gone for a digital camo effect which is something I’ve always wanted to try because it just looks cool. No other reason than I like it. Setting out on this journey I wasn’t exactly sure if I was going to be able to do it and if I was what sort of effect it would create. Into the unknown I went.

I decided to freehand the patchwork of colours because every other idea I had to mask it off wouldn’t work. It’s far too curved and small to get any meaningful and reliable  masking going on, so freehand it was. If you have a method please do let me know!

I started with a single lower leg to see how it would go and I was pleased with the results after that initial test so I then set about doing it over the entire model. 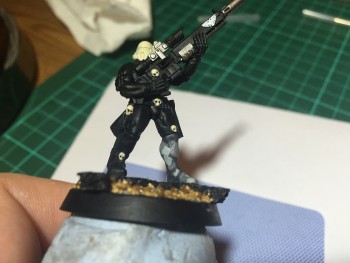 The steps were as follows; 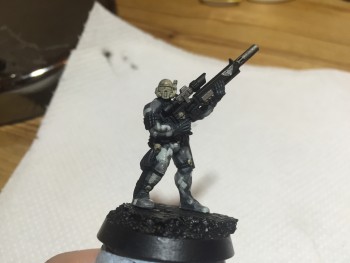 The head is in Screaming Skull and the other fixtures and fittings in the usual whites, metallic silvers, reds and leathery browns. Oh and black!

I really enjoyed doing this model and I am looking forward to doing my other assassins in the same style – all of them on the table top will look really impressive!