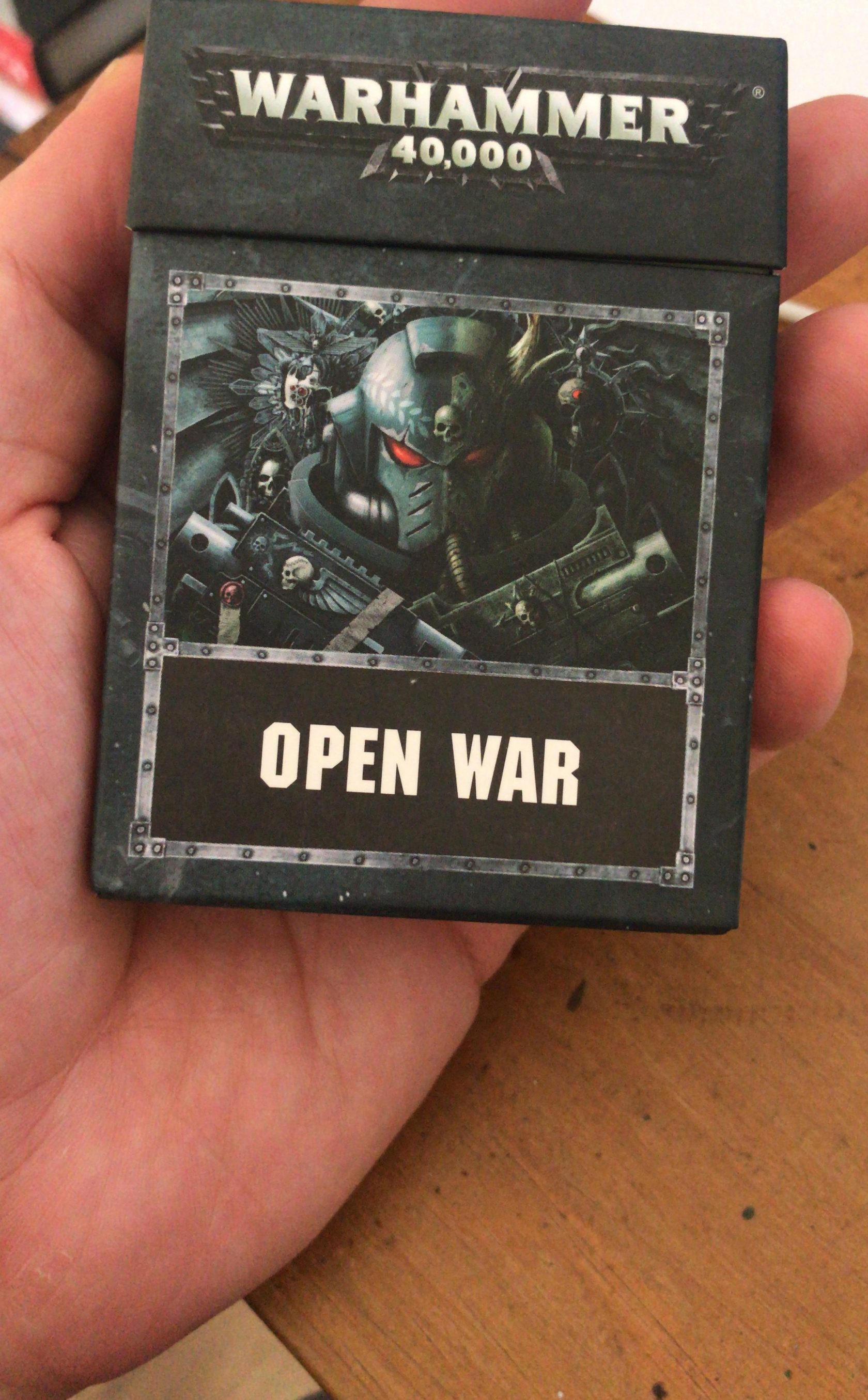 This is my first Open War Cards game! And at 3,000 points per side (1,500 points per player) it will be absolute Chaos. No heresy intended. This isn’t a full battle report because we only managed 2 turns; a late start and booze were to blame! Despite this being a big but short game it was nice to play something different with models I have not used for some time now.

I was teamed up with Necrons and I decided to take my Catachans, Raven Guard and Custodians! We were facing a combined force of Chaos and Eldar.

I went for a Battalion of Catachans, a Patrol of Catachans and a Vanguard of Raven Guard. 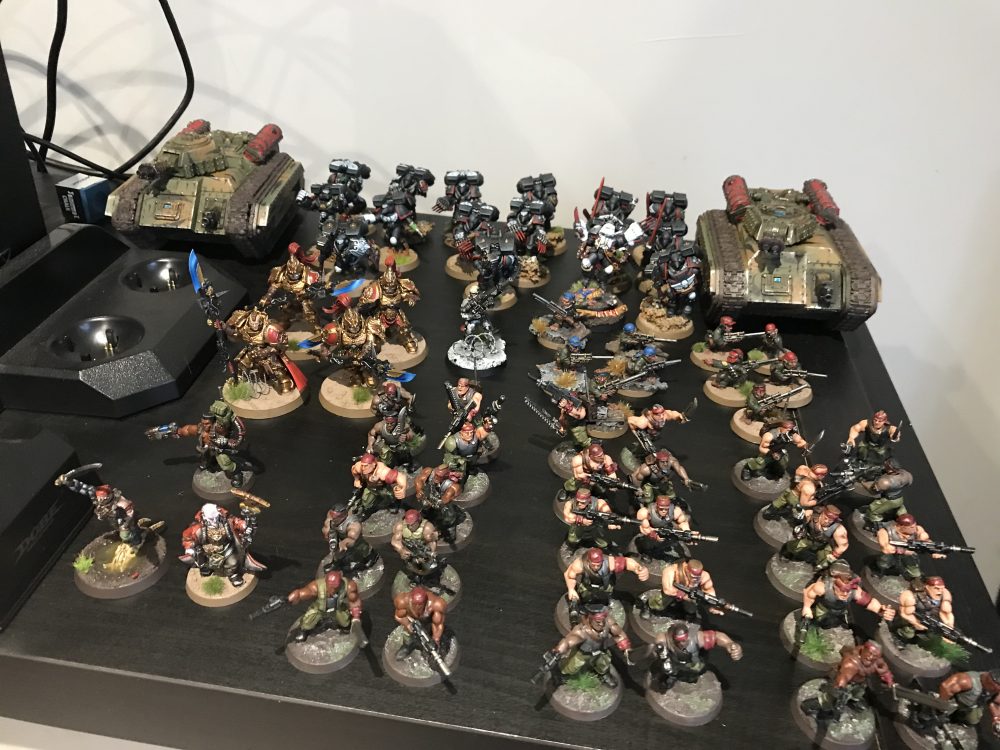 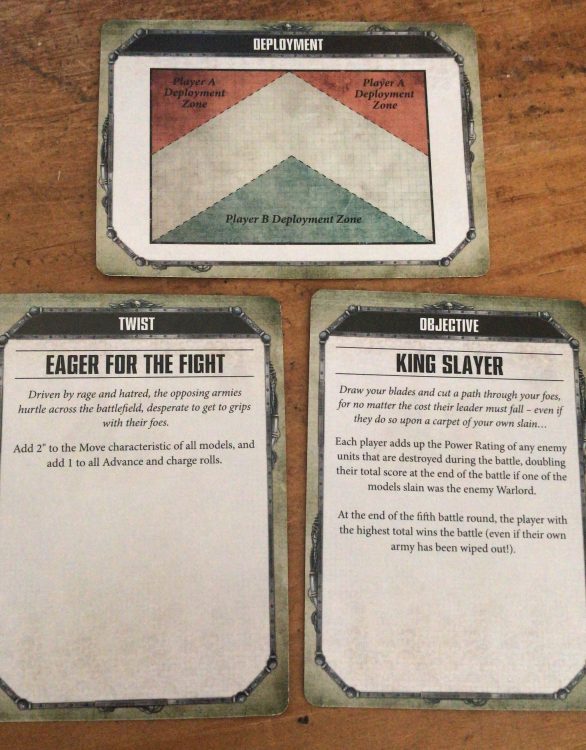 So the name of the game is

Doing so doubles your score. So it feels like whoever can do that, will win. Your score is equal to the total Power Level if units destroyed.

Hence why I’ve taken 10 Ratlings and a Vindicare. Plus Deep Striking Raven Guard and Custodians that can both Deep Strike for 3CP.

Because this is a 2v2 there will be 2 Warlords per side. So account for this we will do the following;

If you kill one enemy Warlord your score is multiplied by 1.5.

If you kill both it’s multiplied by 2.

So if we kill 16 Power Level of units and one Warlord our score is 24.

I deployed all my units on the left-hand side of Player A’s deployment zone and the Necrons went on the right side. The Custodians I had and the Raven Guard were in Deep Strike so not much to deploy at all. I tried to hide my Company Commander Warlord as much as I could, but I was limited by terrain.

On turn one, I lost my Warlord. I had a Vindicare and Ratlings to get rid of the enemy Warlords which was pathetic compared to the attempts of the Eldar. A single Harlequin Solitaire was able to jump across the whole battlefield, charge and kill my Warlord. This gave the enemy a 1.5 multiplier on their final score. This was poor placement on my part but had I realised that Harlequins were taking part too, I may have placed my Warlord amongst my 30 Catachans.

My Ratlings also died in the first turn so they were out of action. The Eldar Warlord was in the centre of the table surrounded by Dark Reapers, Guardians and other characters. One gave Dark Reapers a 4++ and Guardians a 5++. This was going to be a hard nut to crack and I was feeling the issues of playing painted again. I was limited on my model choices. I do have every assassin, but only the Vindicare is painted. It might have been a different story if I had brought all four assassins.

We battled on and my Deep Striking units arrived – but only one squad of Raven Guard, Shrike and the Custodians. The Custodians charged and destroyed a Whirlwind while the Raven Guard all failed their charges. Lame. I did bring on my other Raven Guard later once I had some more space and they did just OK. The Lightning Claws Squad did well against a large blob of Dark Reapers, killing 17 and the rest fled. The Power Sword Squad with a Thunder Hammer did nothing to the group of Guardians with a 5++. The original squad did nothing as they were killed after they failed their charge. They did finish off a Whirlwind, using overcharged Plasma Pistol shots however which was a risk, but nice.

The Open War cards are fun, I cannot help thinking though that knowing the mission beforehand actually makes the game worse. You can build a perfect list to complete one sole purpose. This does not seem as fun as trying to get by against a random mission. While the enemy does the same – trying to make the best of what they have. Mark from Plague Gardening suggested that instead of knowing the mission beforehand. Instead, you draw three cards for each card type. One player discards a card of their choice and the other player chooses one card from the remaining two. I may well try this in the future to give some randomness to the Open War Cards.

We called it in a draw in the end, after 2 turns. The Custodians and Raven Guard were tightening their grip on the enemy and the Necrons were slowly ploughing removing the Dark Angels from the right side. It could have gone either way.

This was the only photo I took