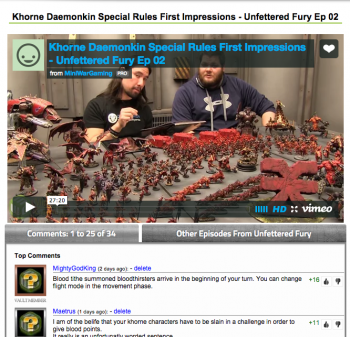 I love a bit of 40K YouTube content every now and again, by that I mean everyday. There’s four channels that I keep coming back to for content. Three I’ve covered in another article, but today I’m covering Mini Wargaming.

I started writing this article a month or more ago. But now is a good time to finish it for two reasons;

All of this is covered by Matt in the Special Battle Report Week video.

They’re a well know channel and have really great content from battle reports, to codex reviews and Who-Will-Win show downs.

A lot of their content is freely available on YouTube and by a lot I mean hundreds of videos and therefore hundreds of hours of content. But they also have The Vault which acts as a pay wall, so some videos are only available if you pay the monthly, or cheaper annual, subscription cost. For these videos they use Vimeo. And in case you’re wondering why its because YouTube’s terms doesn’t allow channels to hide videos behind a pay wall. YouTube want all the moneys!

The first point to cover here is

Why pay at all if their is so much content freely available on YouTube from Mini Wargaming?

It’s a good question and a good place to start. The way the videos are done is very clever. For example they’ll get in a random gamer who wants to be in a battle report, we’ll call this player Joel. Joel plays Tau and he’s playing Mini Wargaming’s Matt in the video, Matt is playing Tyranids.

The first point to note is that ‘Joel’ will be different for nearly every battle report. So tomorrow it’ll be some other random gamer with a different army, with a different play style and a different level of understanding of their codex. This adds a lot to each report I find.

The other main point to note here is that at the end of a report Matt will explain how there is another battle report inside the, paid for, Vault. Again featuring Joel playing Tau but using a different list, at a different points level and against a different army.

This little sale speech is what got me to sign up to the 7 day free trial of The Vault. I play a lot against Tau so this is a good example. I’ve watched  Joel play. I’ve seen him win or lose and I’ve seen how he faired against Tyranids. Now I’m told by Matt that there is more Tau content, that’s more learning material for me, and I know it’s good content as I’ve just seen Joel play and I know he knows his stuff. I’m sold into the free trial now and therefore also willing to part with my cash.

In short I pay because I love their content and want more. If that means paying a little then I will as I know exactly what I will be getting. Because each battle report usually as an accompanying battle report in The Vault with the same player by paying for Vault access you basically double the number of reports available. Plus you get the debrief videos from battle reports and the codex reviews that do not go on YouTube. Oh and you get painting tutorial stuff too that isn’t on YouTube!

I say cash but it’s only a little bit of cash. An annual subscription will cost you about $35 which is pretty reasonable I find. I mean I can spend that on ten plastic men no problem. Why not spend it on hundreds of awesome videos!

The interface is good and it’s usable. The videos in Vimeo work and are produced to the same high standard as the YouTube videos. It’s worth saying here that they’ve not sold out. Other channels who’ve gone ‘premium’ have made their free content terrible and their paid content much better. Mini Wargaming hasn’t done this at all. It’s all excellent content throughout.

The Vault though does need some work though to make it as usable as YouTube. I might be being picky here though, they’re just little usability issues. For instance when browsing videos it’s not obvious which are public free videos and which are Vault videos. That little feature (an icon would suffice) could be extremely handy to filter between those videos I’ve probably already watched on YouTube and those  that I’ve not watched in The Vault.

It would also be good to be able to mark a video as watched. Perhaps it could just show a watched icon or it’ll remove that video from the suggested feed. Anything to stream line going from one video to the next is great, but I am comparing Mini Wargaming’s video offering with YouTube here and I realise that Mini Wargaming do not have YouTube’s budget!

There are some down sides to Vimeo. One is that, although I’ve not had this myself, that it doesn’t work as well as YouTube. Matt did talk about an issue a while back where some users were unable to play Vimeo content. I don’t know how wide spread that is so we’ll ignore it for now. But if you’re thinking of paying it might be worth just checking that Vimeo content works on the devices you’re likely to be using for The Vault.

My experience is very good, but one problem is that it’s not YouTube. If I want to watch a Vault video I either have to use my browser to find it or more commonly follow a link from a public YouTube video. That’s fine but it’s another log in I have to remember. Also because I leave YouTube I no longer have access to all my subscriptions or the suggested videos. However  Mini Wargaming does an excellent job of suggesting content when you’re logged into The Vault.

It’s worth noting I do a lot of watching on my phone so the above issues are made worse by having a little screen as The Vault is not responsive. Finally I cannot Chromecast a Vimeo stream from my phone and therefore lose the ability to queue content up to the TV. Sad Face.

Some Final Thoughts On Money

If you’re anything like me you’re then you’re interested in the success of a company like Mini Wargaming. They’re extremely successful online with these videos, everyone knows them, they get tens of thousands of views on their videos and they’re just nice guys. It’s not gone to their heads.

Along with all this wonderment comes the question;

How much money must they make from ALL those video views?

Answer, I don’t know. But in a recent video Matt said the revenue from YouTube doesn’t even cover the rent for their building. I don’t know what their rent is and I couldn’t even have a guess.

What’s this mean!? They love making YouTube videos for us people and want to do so even if it doesn’t support a major cost that makes those videos possible!

Looking over the last two weeks of videos there are around 526,000 video views. Possibly more as I took the numbers to the nearest thousand, rounding down. This really was a quick count. With half a million video views Mini Wargaming cannot even pay their rent which is shocking really. Some sites say that you get around $1.50 per thousand views and others say its more like 10 cent per one thousand! Even if its $1.50 (and I bet its a lot lower)  thats just $1,500 from a months worth of video views and I can assure you their rent is a lot more then $1,500.

I happily support The Vault if it means Mini Wargaming are able to keep producing these videos, be that battle reports, codex reviews or rotten fish eating. Its nice to see Mini Wargaming embracing the digital age, making it meet their needs, making it work for them and enhancing the war gaming community.

Titanicus, What Reading A Book Told Me About Tabletop 40K