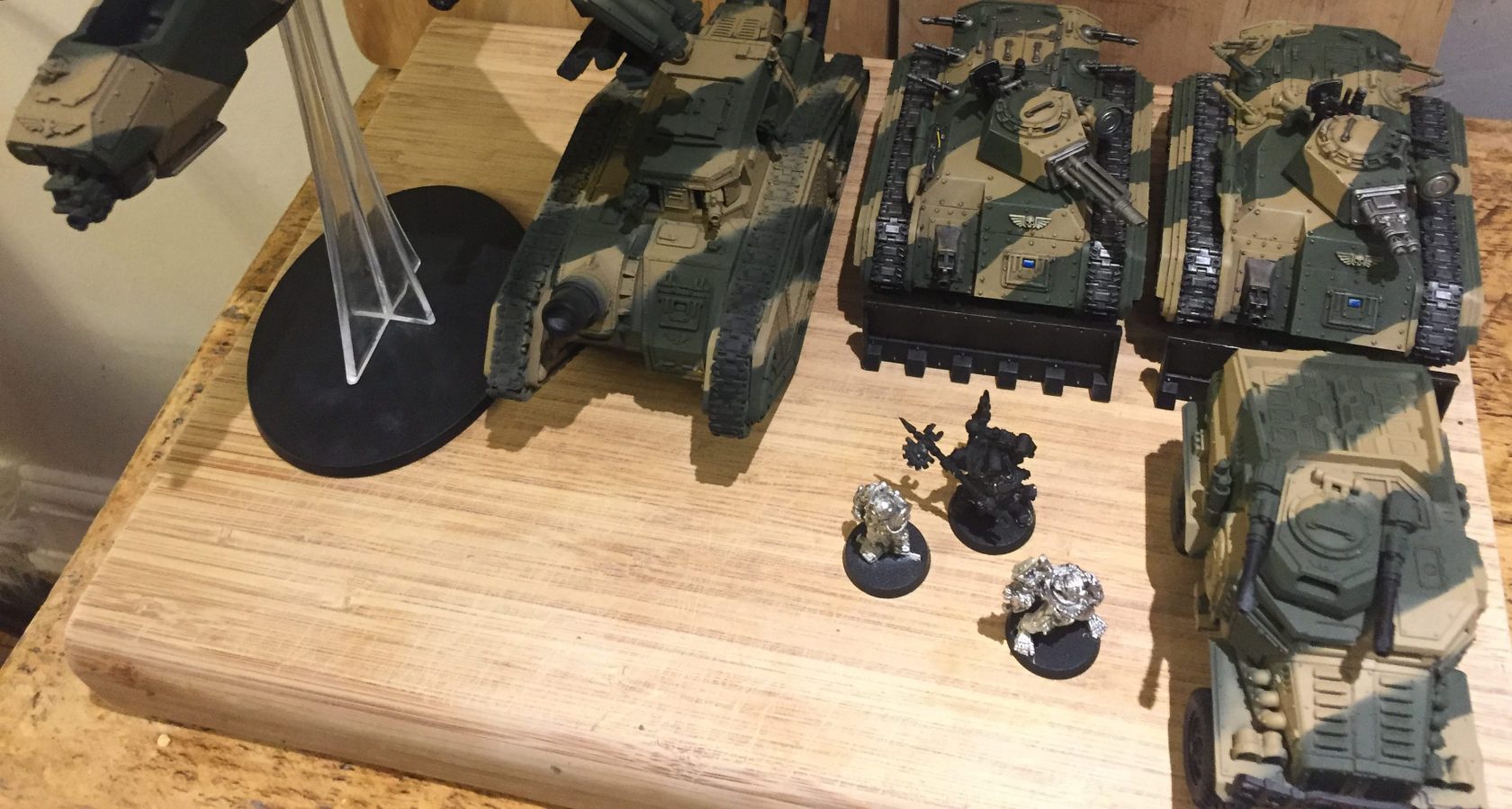 A quick debrief of my recent game involving the Malcador Defender.

A couple of people asked for a battle report for this list – so here I am, fulfilling that request. Although apologies that this might not be as in depth as it could be with turn-by-then rolls. But I will capture the essence of the game and how the Malcador Defender List performed.

We played Kill Points so no objectives. I was allied with Tau – a player dropped out so the three of us that remained had to make do with what we had brought and the lists we had to hand. 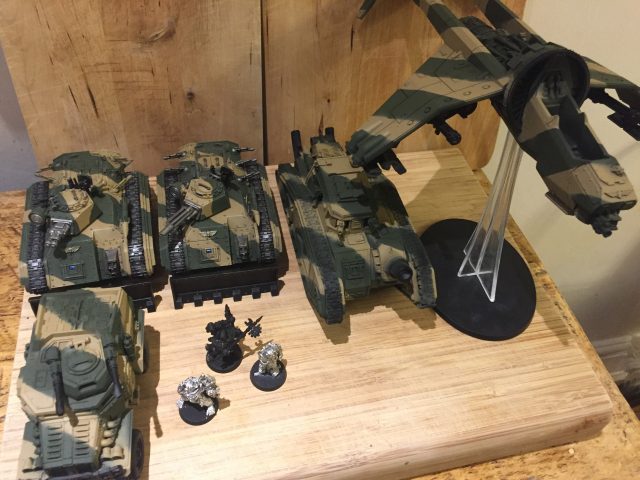 The Enemy (Chaos and Dark Angels)

I distinctly remember my first turn of shooting. A hull point was taken from a Land Speeder (it was also shaken) and a single Cultist was killed. That’s ALL my shooting did, from my whole list – minus the Vulture as that wasn’t on the board yet. It was terrible. Meltas and Flamers not in range of course, Multi Lasers and Heavy Bolters all failed. The Demolisher Cannon scattered 9″ off and missed everything.

This put me on edge as I needed to put a dent into something in order to take the enemy’s fire power down a peg or two. It didn’t happen.

But the enemy at my end of the table didn’t fair much better. The Land Speeder was ineffective due to Snap Shots. The bikes that were near me stayed out of sight because they infiltrated and so couldn’t charge – their Sergeant had Melta Bombs. The Terminators however moved up in their Land Raider, spilled out and charged my Taurox containing my Veterans with three Flamers. The Taurox lost and I lost my Sergeant in the inevitable explosion.

The Malcador loses a hull point or two to the Land Raiders Lascannons – I think. 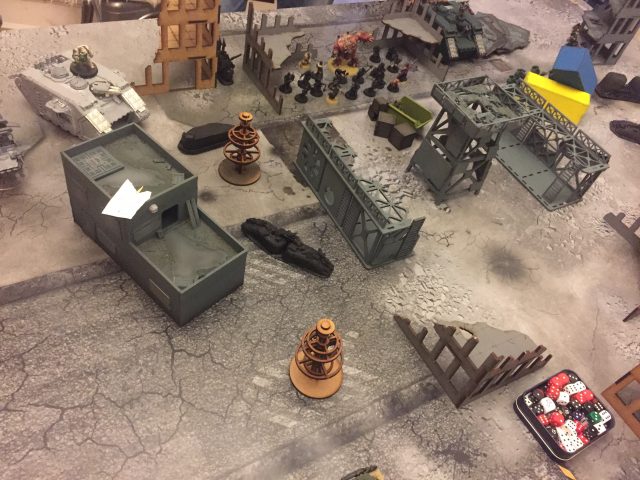 This shows most of the enemy forces

I’m staring down five Terminators, a Land Raider, six Bikes and a Land Speeder. My forces and the forces at my end of the board are now probably all within a 30″ bubble. It’s close and tense. What the heck am I going to do?

The Vulture fails to arrive.

Flame and charge the Terminators of course! I throw my Guardsmen into it. The flames kill one, another falls to fire from somewhere else and then two, TWO, yes Two, die in the assault from Guardsmen! I did three wounds and they failed two of their saves! My arms ached from the fist pumping after that! What luck! They run 3″ back and regroup. I would’ve much preferred 12″!

Terminators dealt with I 180 degree turn my Chimera with the Meltas in, reverse it and disembark the Veterans right in front of the Land Raider. One Melta misses, one fails to penetrate and the remaining EXPLODES the Land Raider. Result!

Meanwhile the Malcador Defender misses again with its Demolisher Cannon, some other weapon from the Malcador does a wound to the bikes and one dies. That’s it. It’s BS3 is really beginning to show now. The two squads of Guardsmen have killed more points than the Malcador so far! 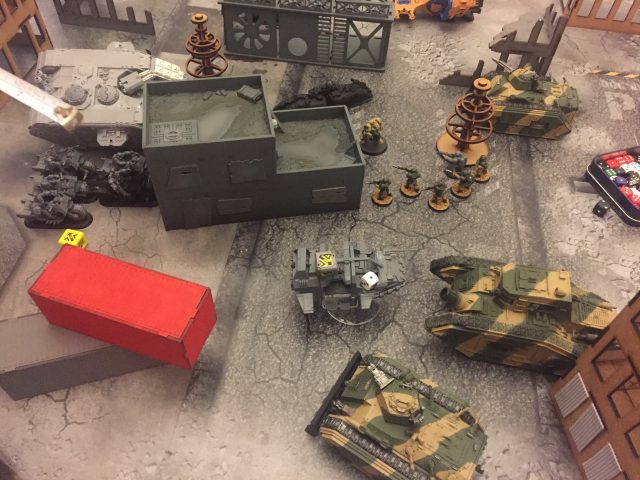 Things are getting really close and messy 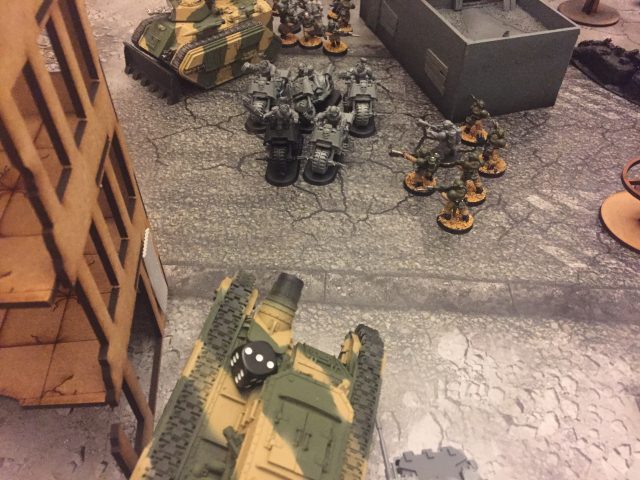 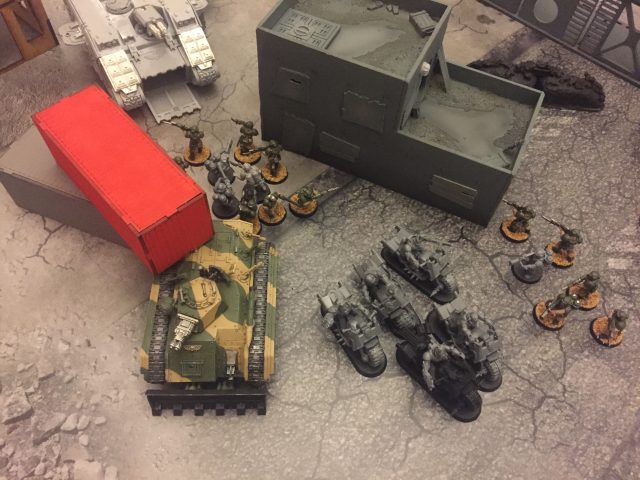 The Melta Veterans and Land Raider before its popped

The Vulture arrives! So by this point the Tau are in real trouble. One group of Pathfinders is gone, the Riptide is down to about 2 wounds after taking a handful from its own Nova Reactor, the Crisis suits have been charged and are in a bad way and finally the Broadsides are about to be eaten by Chaos Spawn. So the Vulture comes in and swoops down towards the Tau’s table end and wipes out 5 Tactical Marines with ease. 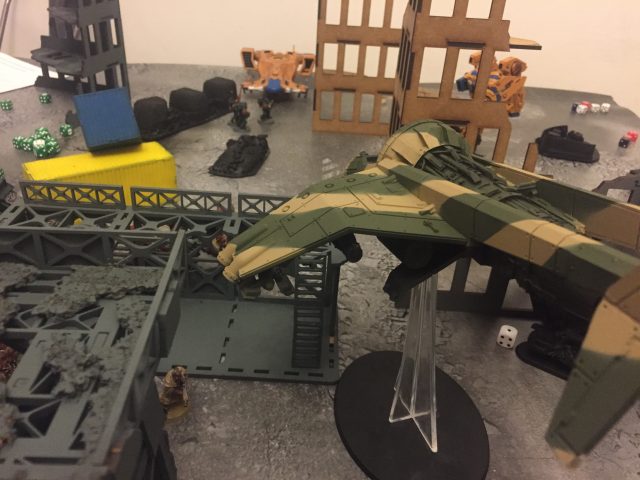 My Flamer Guardsmen come up smelling of roses again by killing 3 or 4 of the bikes about to assault the Malcador. This brings them down to only two models and the Demolisher Cannon attempts to finish them off at close close range. It scatters back and takes a single hull point off the Malcador and kills a single bike. Wow. Not. All its other weapons fail to do anything too. 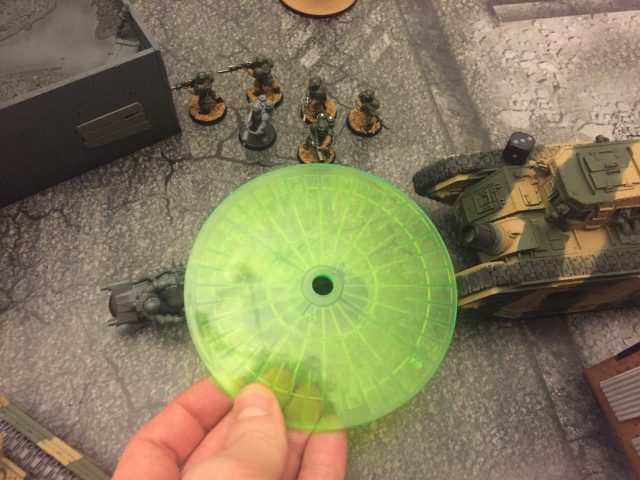 The Malcador is really survivable though its stood up to a fire Lascannon hits a Melta Bomb charge. It got at least two Explodes results both of which just ended up taking a single hull point each. So lucky there. 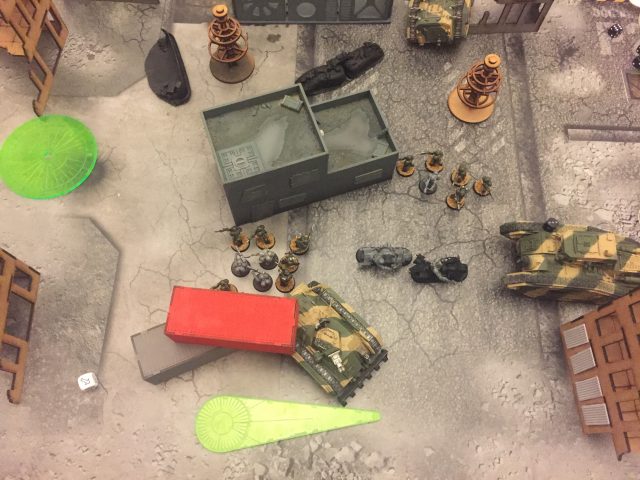 Things are looking good at the end of my Turn 3

The Helldrake arrives in the enemy’s turn 3 and promptly roasts nearly the whole Guardsmen squad with the Meltas. 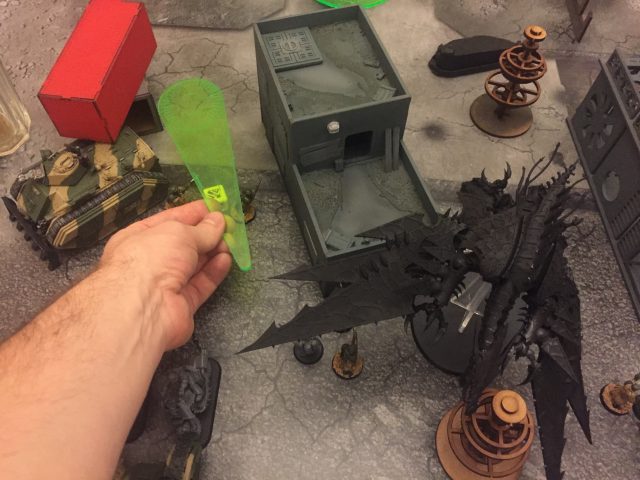 I lost a Taurox and my Company Command Chimera at the end of turn 3 to the Hellbrute’s Melta. The Tau lost so many units. The Chaos Spawn just ran around their end assaulting and killing everything. The Riptide survived with one wound but the Ethereal didn’t, the Pathfinders didn’t, a Devilfish didn’t, the Crisis suits didn’t and I think there was one Broadside left.

So despite the loss and the terrible shooting of the Malcador I was fairly pleased with the list. The Malcador soaks up punishment (and was repaired once too by the Enginseer). I should have done with the Malcador what I planned on doing with it, drive it into the middle of the table – so it can use all its weapons (it bristles with guns from all sides). But I didn’t, I just held my table end.

The Flamer Guardsmen unit take Man of the Match though, they killed well over their points cost.