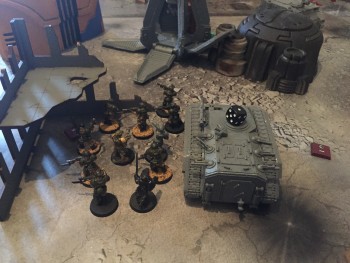 It’s been about 48 hours since my two Maelstrom Mission games at 500 points and I’m still thinking;

That was a hell of a lot of fun!

The reasons are three fold;

I went for perhaps an odd list with my Imperial Guard army. But first…… what I was going to use as my army. I originally went for something like this, all with limited equipment and upgrades;

But I changed my mind, dropped the Leman Russ and the Company Command Squad… and so went for something that features a lot in Imperial Guard lists. The above was too much with the Russ at 150 points for just the chassis and Punisher Cannon. 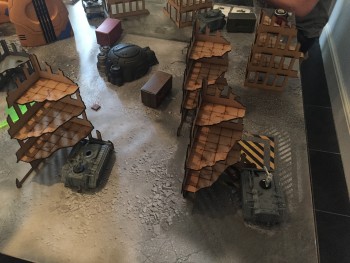 Playing that night there was Tau, Chaos Space Marines and Blood Angels – and me with Guard. We would roll off once we arrived to see who played who. I played against Blood Angels twice. We were also playing on a smallish table, we split our normal 4′ x 6 table in two, so each 500 point game was taking place on a  2′ x 3′ table top.

The list I did decide on for the evening, without knowing who I was playing, was as follows;

Couple of mistakes I have realised that I made in the game while writing this post. I swear noticing this stuff after a game is the worse feeling in the world!

The list is rather bare bones, six units if the squads disembark and the Lord Commissars leave their units. But for most of the game it was going to be four units, two Taurox and two Veteran squads once they disembarked.

My thought process was that I wanted something solid from the Imperial Guard, not a force that would wipe the enemy off table (wishful thinking anyway) or was particularly geared towards Maelstrom missions or a particular opponent. When I say solid I mean a staple of the Guard, a unit that is taken a lot and is affordable in all lists. I wanted to put them through their paces, really get a feel for how they performed in a small scale, close quarters match up; these guys were going to get dirty.

The Taurox’s were taken because I could not afford Chimeras. I had not used a Taurox before and I wanted to, so this strays slightly from the Guard staple idea  – as Chimeras are probably used more often. I have a Taurox model, just unbuilt so it was nice to give them a go. I used Chimeras as proxies.

Blood Angels went first and dropped a pod with a Librarian Dreadnought right in front of my Melta Taurox. After scatter and disembarking it was 12″ away and failed its charge. AThe Taurox is very susceptible to small arms fire, at 11 front armour the Land Speeder’s Heavy Bolter was able to glance it on 6s and even Bolters, Bolt Pistols and Storm Bolters can glance from the side facing on 6s. Oh that side facing, its made even more vulnerable because the Taurox’s fire points are on the side. So you’re turning your side toward the enemy to get shots off, but that then exposes your side armour of 10. This felt like a major weakness.

The Melta guys inside a Taurox did their job though. After the Librarian Dreadnought lost a hull point to Perils of the Warp the Meltas moped it up and wiped 150 points off the board in turn one. This is what they were put there to do, kill armour. This was a major blow to my Blood Angels opponent and he was visibly distressed!

The Plasmas faired less well, both died to Gets Hot and that unit quickly became useless. Its Taurox was wrecked and the Plasmas were dead. What remained was the Plasma Pistol and the Lord Commissar with Melta Bombs, one is 12″ range and the other assault only so these guys were then as good as dead from then on, stuck 15″ from my board edge but in cover, but also right in the line of sight of a Predator with an Autocannon. Autocannons are Heavy 2, ya know!?

The game ended nine all, and it felt good. We didn’t count the cards until we had finished so it was a complete surprise that we both managed to get nine each. It was a great game and I was really looking forward to the next one. 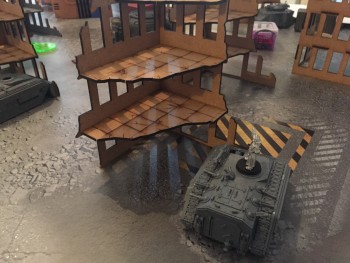 This mission starts you with six cards. At the start of subsequent turns you draw cards up to a maximum; turn two; max cards five, turn three; max cards four, etc. So you have to be quick and get your points early on in a game, as you’re forced to discard cards down to the maximum.

The game started the same as the first, Blood Angels went first, Drop Pod came in with Librarian Dreadnought. But from then on it was very different. My Meltas failed to down the Dreadnought. Both my Taurox’s were wrecked by turn two taking away my mobility. Once into melee my Lord Commissar rolled 1s and 2s for hitting with his Melta Bombs and so the Dreadnought went unchecked through my ranks. Although that squad of Veterans did kill 5 Tactical Marines in the assault, despite me forgetting I had a power weapon on my Lord Commissar.

From then on I was dead in the water with no transports and just one ten man Veteran squad left. I lost the game three VPs, to eight.

An excellent couple of games despite losing one and messing up two fairly major portions of my list. We’re going to play the same forces again, this time with fully functioning Autocannons and with Commissar power weapons! Loving the Maelstrom, I really didn’t think i would, but I do!