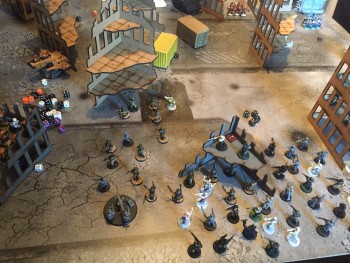 King of the Hill – But we have no hill terrain currently!

My little gaming group seems to want a custom mission and I have been given that task. A kind of Race / King of the Hill idea has been batted about a little bit and so I’m going to attempt to formalise that into a playable mission for a 1v1v1v1 game. The last one went OK, I think. Wish me luck.

I think thats all that was discussed so far and so we will stick with that as a basis. One major issue that did crop up was that if Fast Attack deploy first then some armies will have a significant advantage with their Fast vehicles. For example Land Speeders for Marines and Piranha for the Tau are going to be very zippy. The Guard have Hellhounds andRough Riders but no nice Jinking Skimmers. This feels like a slight disadvantage but I also think having something fast right away defeats the point of having a near by objective. You can easily grab it in turn one, its easy? Better to use a much weaker and simpler unit to make it a challenge for the unit try to reach the near by objective?

King of the Hill Custom Mission

So we will run with the following;

What are your thoughts? Anything massively broken?