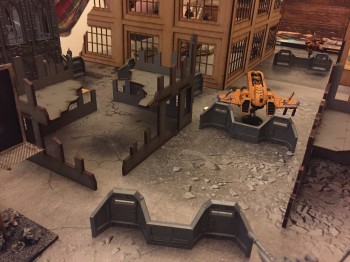 With another game just around the corner (less than 24 hours) I’ve a new list to share and for you to Critique. The last article received some absolutely great feedback and has really helped be think slightly differently about my lists. A massive thanks to all those who commented. You can read the Battle Report from that game here.

I’ve changed a few things in this list and kept a few things the same. The game will be the same as last time Tau and Guard VS Space Marines. The Marine players are still new so they’re not up on all the rules. But they’re slowly getting there. It’s tough to teach them everything on game one, but they have the rules and codex they need so are making ground with their meta. They will, as far as I know, be fielding mainly troops with Land Speeders and Dreadnoughts.

My thoughts are that Creed can re-roll orders so no Vox Casters are needed. The Sentinel will Outflank and give them something to think about later on, this may work well and cause confusion when Farsight Deep Strikes too from my Tau ally. Not everyone is a fan of the Bullgryns and Priest but they worked extremely well last game so they are coming along for the ride this time too.

The Platoon Squad with its Flamers, Krak Grenades and Melta Bombs will be close behind the Bullgryns and will hit hard against vehicles as well as do a good job of clogging up Marines in melee and firing their four Flamers in overwatch. The Veterans will sit back with their Lascannon and Camo Gear in cover and pop things from afar. Thanks for that Charlie!

My main worry is that my 3x 10 man Infantry Squads do not have any staying power and they may run extremely easily. On that bombshell, lets end it here.