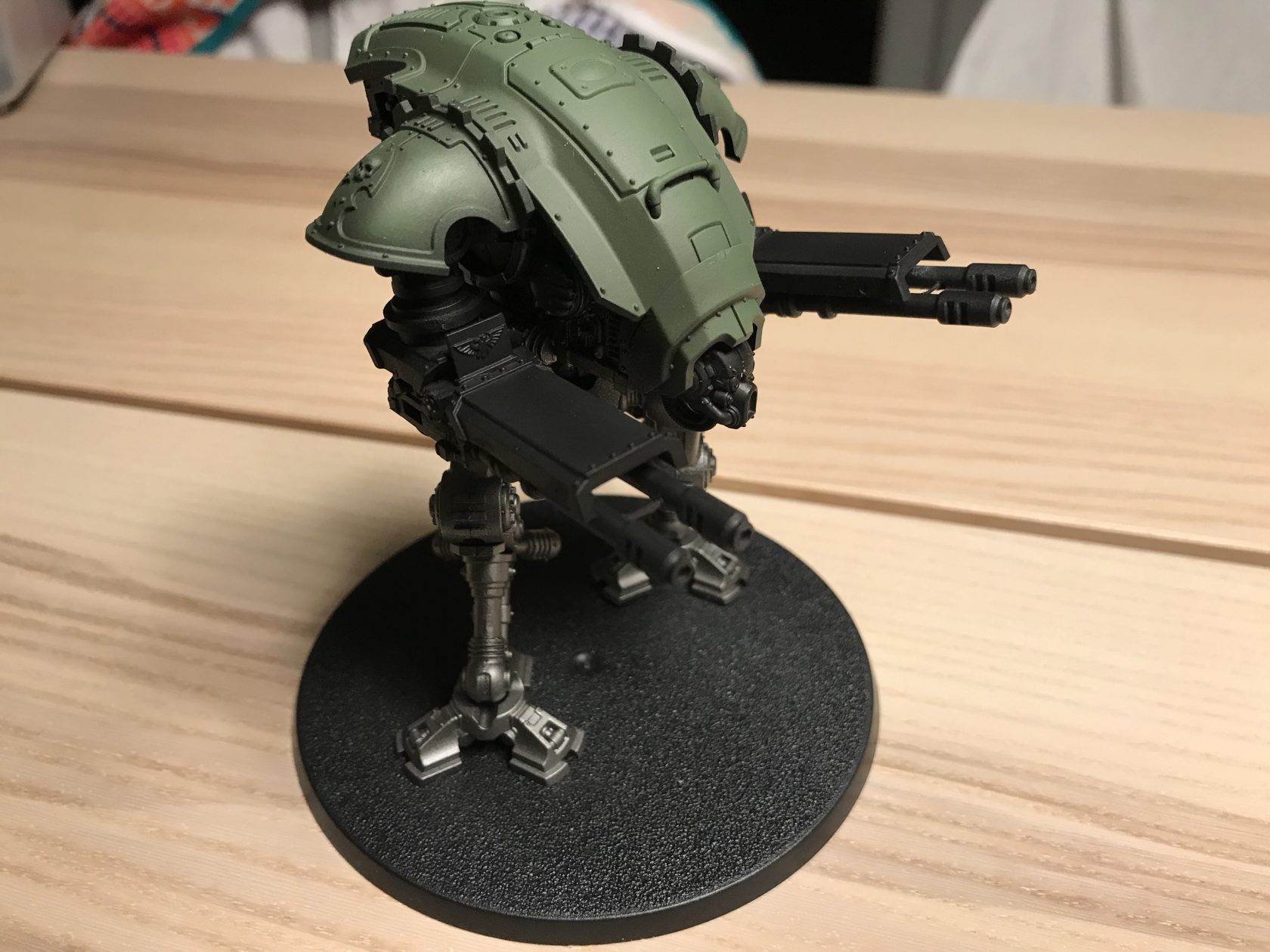 Lets get our conversion on with some Helverin Autocannons for one of my three Armigers...

My conversion for the Armiger Helverin Autocannons seems to have gone down well! I kind of just made it up as I went along making the first one and it turned out well. This was on Friday night.

Imagine my horror when at midnight when I’d created this awesome weapon – that I now needed two! This was when my iBook of the Codex appeared. :-(

The Helverin Autocannons cannot be taken instead of the Thermal Spear. They replace both weapons so now I needed two! Back to the bits box and by some miracle, I managed to find each piece a second time around. Just.

So if you have an Armiger Warglaive this is how you get yourself the Helverin with ease… Note that I used Games Workshop bits only so that its still a Games Workshop model. And therefore good for Warhammer World and their Stores?

The main components are: 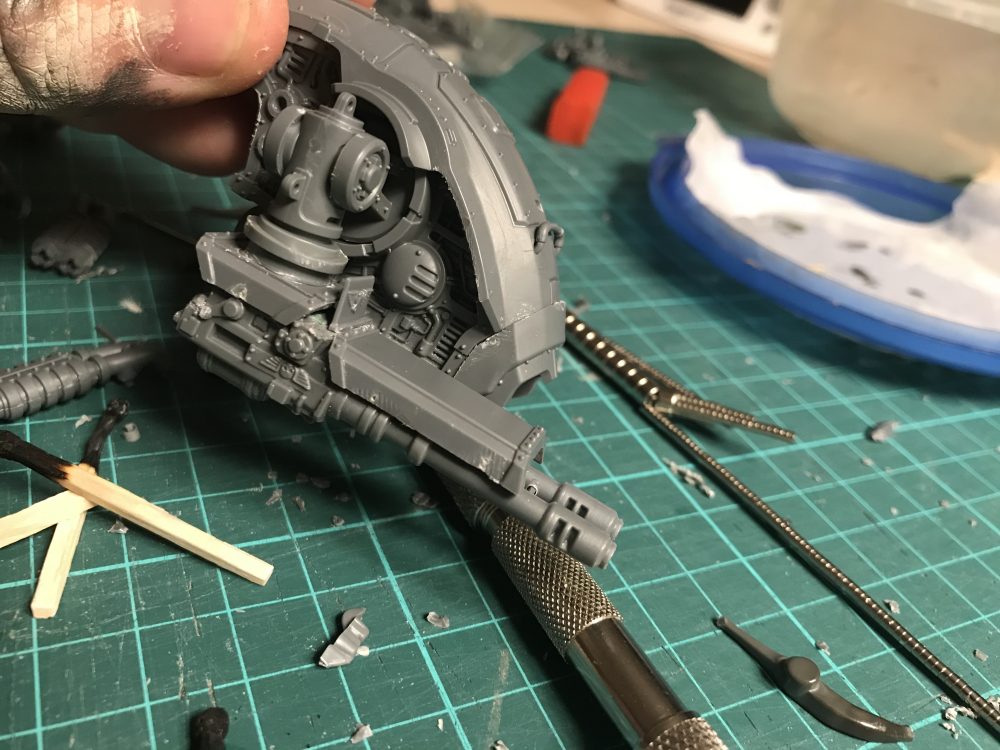 That photo looks awful with scuffs and all sorts. My stuff always looks like that, but it never looks anything like this once painted – I am happy. Also, that upside down skull has now been scrubbed off! Opppps! Good spot Diddypop89!

I say just because I had to find an inbuilt Leman Russ and salvage its piece. I couldn’t find the part in my bits box.

The track guards I used because initially, I had used Scout Sentinel frames which didn’t work. I was to trying to steady the Autocannons and align them. Track guards worked better because their width was perfect t to house two Autocannon barrels and they looked great! 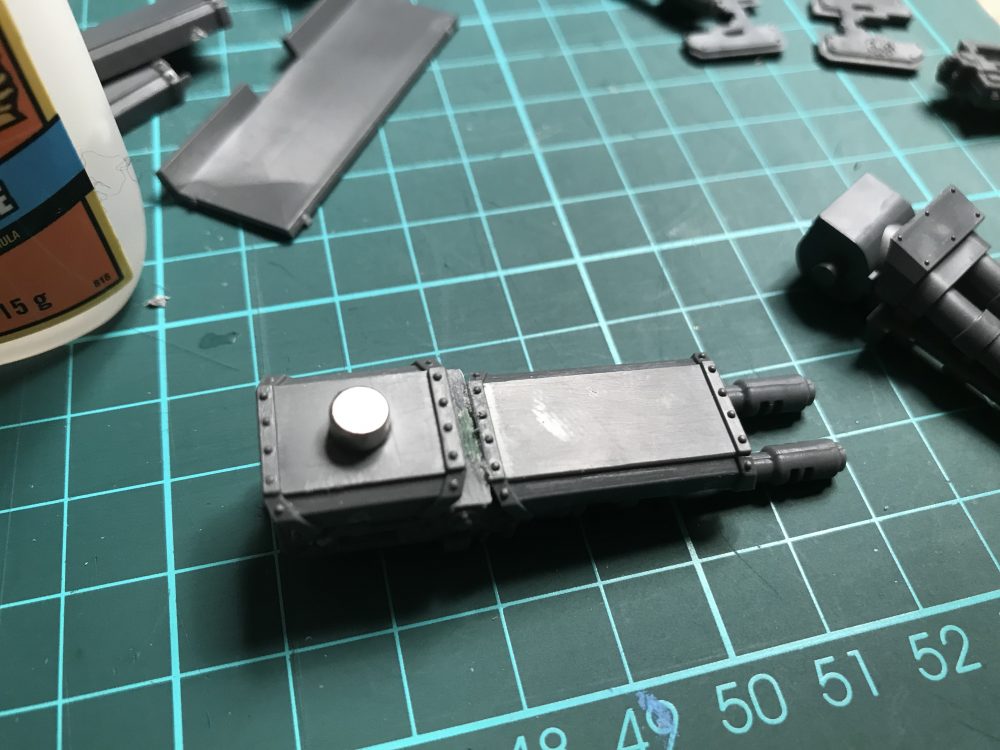 Without them, there are very few contact points between the two Autocannons. Something else is certainly needed to keep them together.

The shorter piece of track guard over the firing mechanism of the Autocannons has a magnet glued to it. This was so I can use any weapon configuration for my Armigers. The Leman Russ piece goes around this magnet to stop the gun rotating and also to hide the magnet. The Leman Russ part just looks much better. 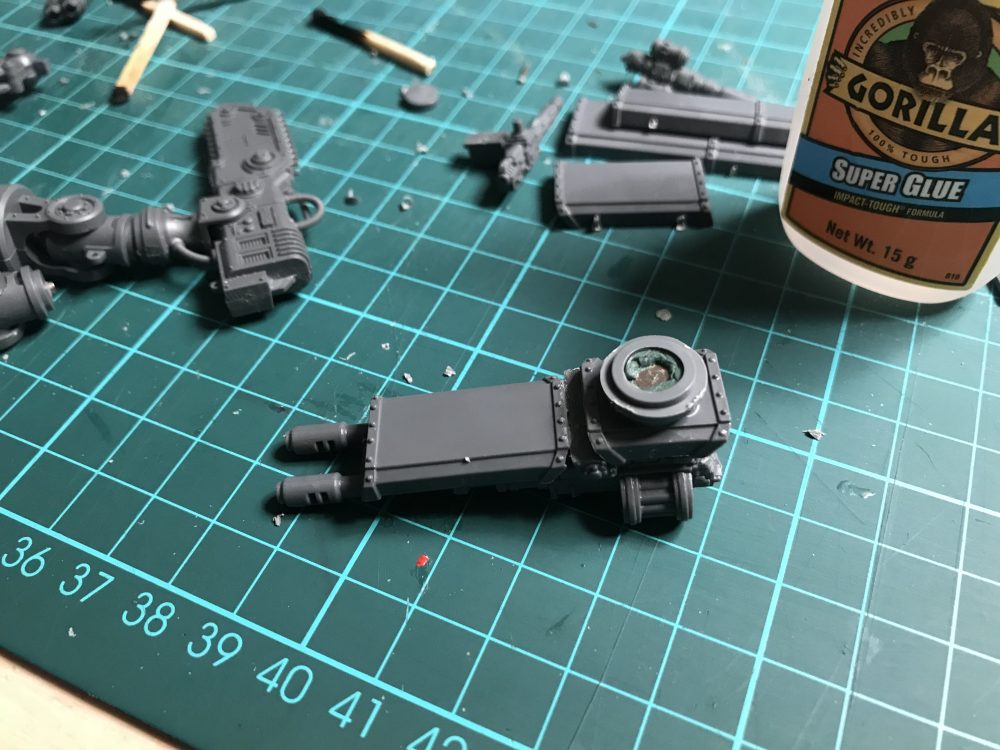 Helverin Autocannons with the Leman Russ part in place

The only issue I’ve had it is the whole weapon is deep. So if the Armiger looks straightforward then the Helverin Autocannons touch the legs. This could be easily solved by not using magnets or using smaller magnets.

But I’m happy with it looking sideways.

I added this Aquila thing too from my bits box, its certainly not Ad Mec approved! I think it works though and covers that weird hole up. 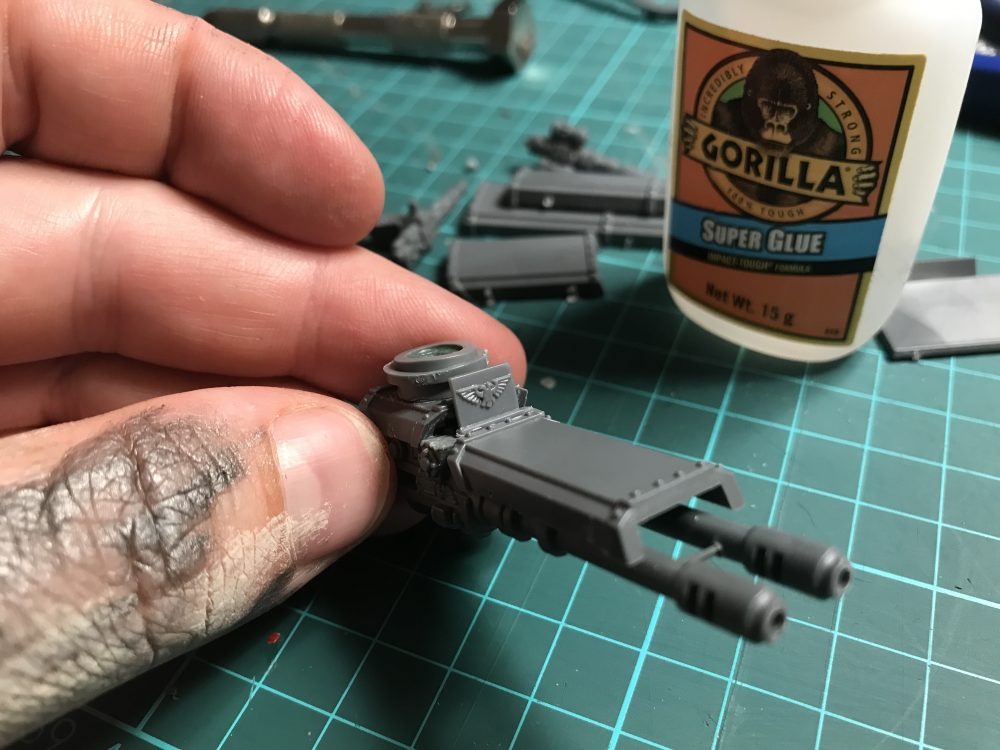 And that is now folks! I hope you liked this short walkthrough on how I made my Helverin Autocannons. It sure was fun doing a conversion!

I cannot wait to finish this guy and the other two. I have not played with them yet, hopefully, tomorrow night they will get their first test run as part of a 1,500 point force of Astra Militarum and Armigers at Boards and Swords! 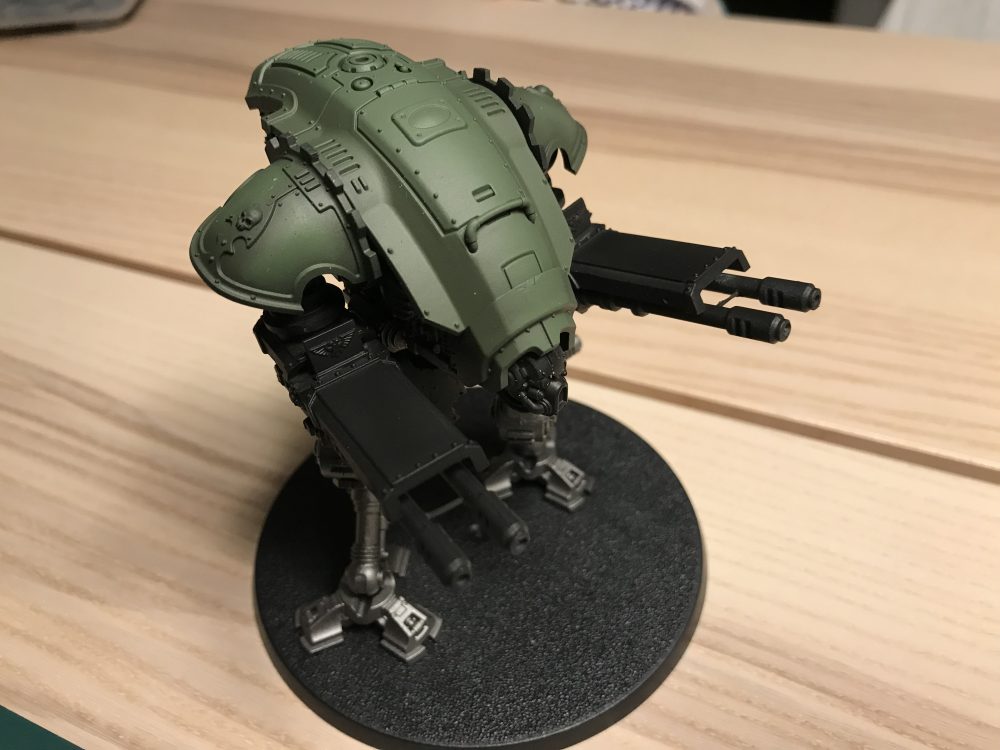 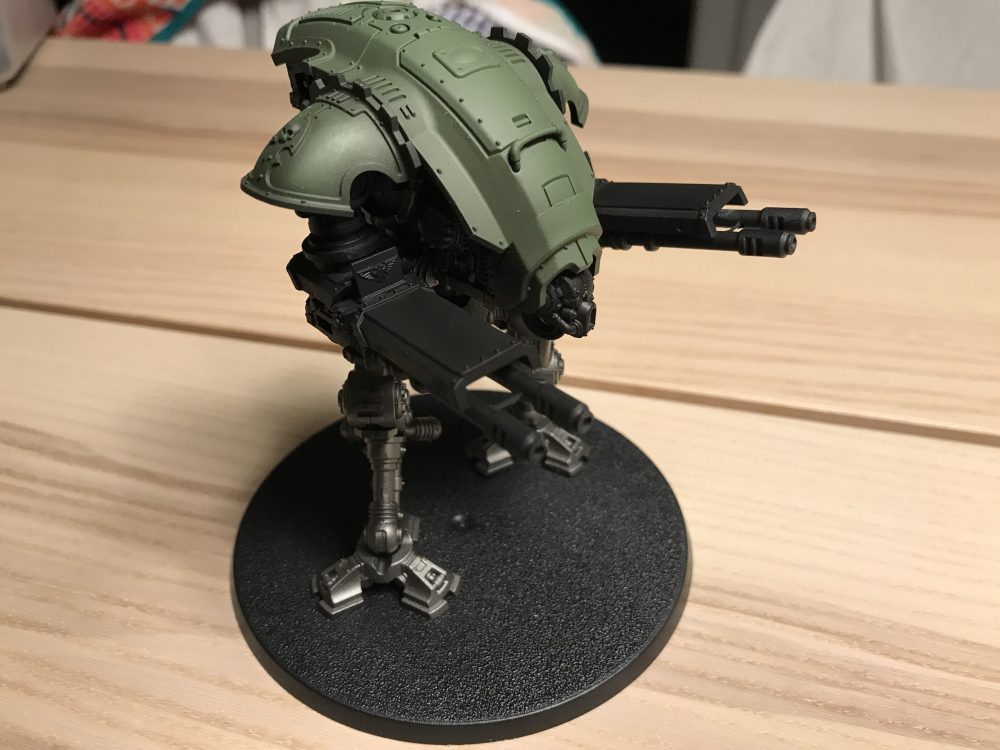 I have used my airbrush only so far on this guy. I used Castellan Green on his armour with a slight Loren Forest highlight. The legs are Leadbelcher at the moment.

My other two Armigers will be just stock Warglaives with the Thermal Spear. Boom! 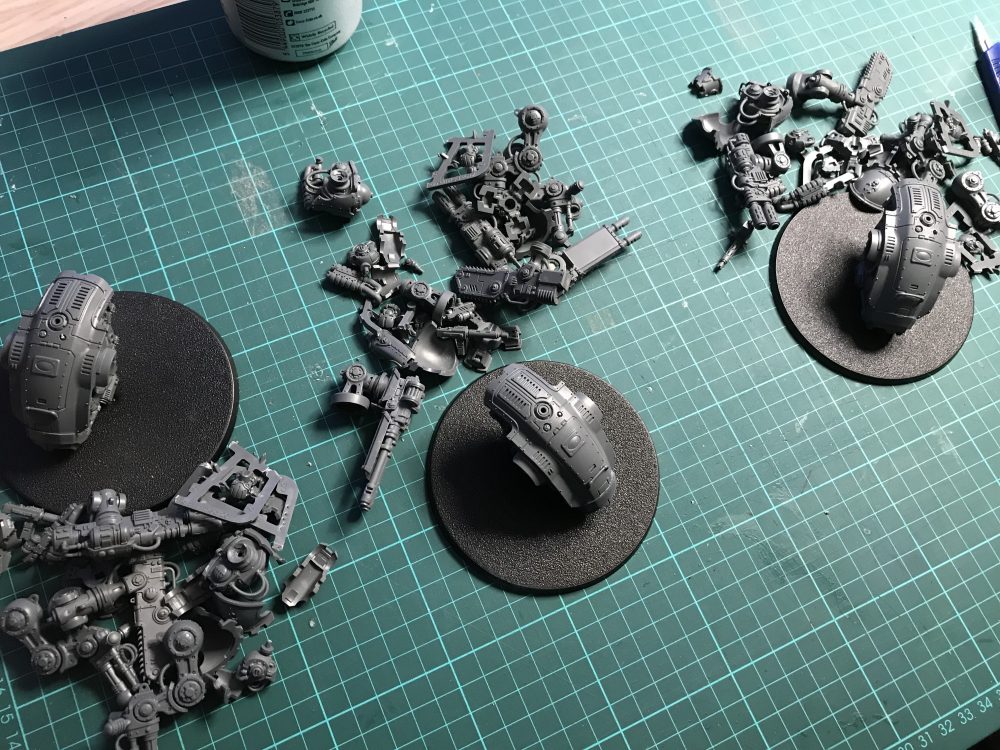 Armigers in their production queue