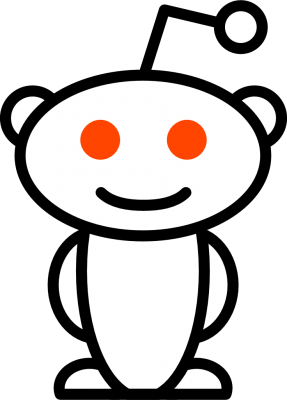 Reddit is a platform for sharing, anything; text, links, polls, questions, videos, images, etc. Although there are only two types of post; text or link. The text post type is generally used for questions (although the text can contain links) while the link type is used for everything else. Posts are voted up and down by Reddit’s users, this effects their position within Reddit and therefore the amount of traffic, attention and comments they get.

This part of the article I initially placed at the end, but I thought it worthy of being moved up the article as there is a lot to learn here, especially if you have never used Reddit and you’re considering it as a platform for sharing content and joining a wider discussion. I jumped in two feet first and learnt, hopefully this will save someone from doing that.

As another user of Reddit put it to me;

There be monsters here.

If you place something on the internet then you need thick skin, you’re opening yourself up to anyone and everyone. This isn’t your local hobby story where someone will smile and say “Yeah, thats a nice model mate, good on you” when in fact they are thinking the exact opposite. This is Reddit an open forum, people will tell you what they think and won’t pull any punches. They can possibly be rude and/or insulting just for the sake of it.

If you take things to heart do not use Reddit. If you want genuine, honest feedback from people who really know what they are doing then use Reddit. That isn’t me bashing Reddit, its just how it is.

The amount of traffic that Reddit can send your way borders on the insane. On occasions in the past when I have posted an article from my blog on Reddit, if it gets up voted I can get 2 months worth of normal traffic in 12 hours. As you get more votes you get more traffic, more comments and generally more exposure on Reddit. You can literally see the traffic spike, from a few concurrent visitors to 30 or 40 in a matter of minutes.

This is an amazing feeling; that people are looking at your content and reading it! Its why we blog, to entertain, inspire, learn and engage with others. But I had a moment of clarity one day while walking the dogs. And this was;

They are not fans.

The visits from Reddit tail off very quickly, you get a spike for perhaps 24 hours and then it tails back to your usual traffic levels. People who come from Reddit are not your fans, they are interested in the post you placed on Reddit and perhaps not in your wider offering as a blogger. The statistics backed this thinking up too. This graph says it better than I ever could.

With the traffic point being so obvious and users not sticking around you have to ask yourself; why use Reddit, whats the purpose? If people are not engaging past the first page and they are coming just for a quick fix from a single article – what is the point if a blogger’s aim is to engage. The answer for me is because its still traffic and some people do comment, engage and stick around.

You shouldn’t pander to what you think will do well on Reddit, stick to what you want to do and enjoy it. If it flops on Reddit it doesn’t matter, if it does well and sends you traffic that is great. But it shouldn’t be an end point, to do well on Reddit. It should form part of a wider strategy to increase your readership among the types of hobbyists you wish to engage with. If you solely rely on Reddit you will have days with 1,000s of hits and days with zero.

Reddit is split in subreddits, a sub is basically a category, a mechanism to split posts into manageable areas. These subs vary greatly in terms of subject matter and in terms of their user base. Two different subreddits could cover the same subject but the user base of each could be completely different, the rules for each could be different too therefore the feedback and reactions you get can vary greatly.

The variation between subreddits is true for hobby subs too. The four subs I’ve used the most are named Warhammer, Warhammer40K, Terrain Building and Mini Painting. Subs are generally referred to in this format /r/Warhammer40K because this format is auto linked to in comments on Reddit. My experience of each of these subs has varied greatly and I know it has for others too. It’s worth covering each of them briefly so you know what to expect, what to and what not to do.

A 40K focused sub that is overall friendly and extremely helpful. There is a lot of different content on this sub and if you’re looking for inspiration or you’re simply bored then head over here. There is always some really nice 40K eye candy here. Because of the voting mechanism you can quickly find the best posts as well as “controversial” posts. These are posts that have been up and down voted a lot, due to their controversial content.

The rules for the Warhammer40K subreddit are fairly liberal and are listed in the right column, they generally revolved around being respectful and not bashing the Warhammer sub (more on this later). I have posted links to my blog on this sub, images and questions – all have been well received.

This subreddit is not solely for Warhammer Fantasy, its for all Warhammer, so you will see 40K and Fantasy here. The rules for this sub are more strict than they are for the Warhammer40K sub. The rules are listed on the right hand column on the main sub page, there are also another set of rules that you must read if you’re going to post and take part in this subreddit.

These two Warhammer based subs are run by different moderators and both subs (I think) cater to a different audience. For example on the Warhammer sub you cannot just post links to your own blog, its considered spam. You must participate first, they have a strict 1:9 ratio for self promotion links versus general participation. These two different approaches have put these communities at logger heads in the past – therefore they both have this “no bashing the other subreddit” rule. Its politics, ignore it.

Does what it says on the tin. Lots of terrain posts here and great for inspiration when you get stuck on a terrain piece and you need to know how to made plastic look like wood. I have posted here too just fine, they have rules but they are not strict so get stuck in! I have posted here a couple of times without incident and had some great feedback, as well some handy tips. This subreddit is much smaller than the Warhammer subs.

I have only posted here once or twice, its been a good experience though. It covers all types of minis so there is  varied selection of content which can be really handy for inspiration. Again this subreddit is much smaller than the Warhammer subs.

Engagement is much lower on Reddit on the whole. If you I get 30 clicks from Twitter I could well get 3 or 4 comments on my blog, 3 or 4 replies on Twitter and a few Retweets and Favourites too. This is pretty good engagement, 10% comment, 10% reply and perhaps 5% retweet.

That is all for now, next time Blog Networks!

I have an addiction & it is glorious