A guide to hobby & social media – Posting on Twitter (Part 3)

In this article we’ll cover the many different methods of posting to Twitter and how to leverage those methods to get you the results you desire. While there are only 140 characters to play with, there are a variety of ways you can use that limited space to get what you want. This should hopefully form a nice follow up from Part 2.

One important point to note is that Twitter isn’t Facebook – there are no fancy advertising style algorithms at work determining if your tweets are seen by others or not. If someone is online, follows you and views their timeline they will see your tweets. It doesn’t matter if a tweet has been paid for or not. It also doesn’t matter how many followers you have, if the tweet has been retweeted or favourited zero times or 500 times. It’s an equal platform, or as equal as they get.

Bearing the above in mind means that you can do a lot to influence how many people see your Tweets and engage with you via those Tweets. Engagement is good, it takes your content further than just your followers, meaning more exposure to the wider table top audience.

Where ever possible I’ve included example images on the right, be sure to click them to view a larger version. Some of the screen shots are taken from Twitter’s new Analytics platform, this is free but in order to use it you need to sign up and start a paid ad. I have never actually paid though, so I think you just need to go through the motions of signing up and creating an ad to gain access.

Although you may not have access to this data these sorts of stats and way of thinking is always good. In all the below cases ‘higher is better’.

For more details on Twitter and its basic lingo you should read Part 2 of Cadian Shock’s Social Media guide.

The most basic tweet is just text, no links, images, hash tags, mentions, etc. This tweet allows you to “say” the most as you’re not wasting space on other fancy bits. But it’s also unlikely to reach many other Twitter users, this is because it will only be viewed by those people online now who happen to be viewing their timeline and who come across your tweet. In 30 minutes time it will be lost amongst 400 other tweets so doing more to increase engagement counts for a lot.

Research from Moz shows that at any one time only about 6% of your followers are likely to be online. So if you have 1,000 followers only 60 may see a tweet, of those 60 very few may reply, favourite or retweet your content. This means that posting the right stuff at the right time can make all the difference between someone noticing and no one noticing. The 6% is questionable as different industries will have different viewing rates. The web / tech industries are likely to be higher while others are lower.

One way around this problem is to tweet at specific times when you know that more users are online. Tweriod is a great tool for this. It analyses the activity of your followers to see when they tweet. By doing this Tweriod can, with some accuracy, determine when your network of followers is online. Tweeting during these times of activity ensures you maximise the exposure your tweets get to their most relevant audience.

A quick note, although this will be covered again in a later post, Hootsuite and BufferApp allow you to schedule tweets. So if you’re out, away, offline or at work you can still tweet at the optimal times of the day. 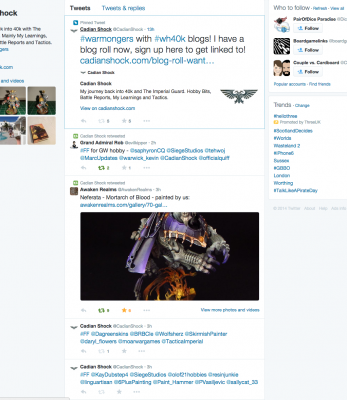 As the name suggests replies are exactly that, a reply to a specific user. Although more than one user can be included. These tweets starts with an @ mention which directs the tweet to that user and alerts them that you’ve mentioned them. The unique aspect of this style of tweet is that it will not appear within your main feed on Twitter.com. The idea, presumably, is that your main feed isn’t then scattered with replies to random users. Instead it only contains real content that’s meant to be shared to a wider audience.

While this is a minor difference it’s worth bearing in mind, also each third party app that is designed to be used for Twitter such as TweetDeck, Hootsuite, TweetBot, etc all handle this rule differently. Some will contain replies within a user’s main timeline and others don’t. In short if you have something important to say do not start it with an @ mention.

Example of a mention

This can be an effective way of getting someone’s attention while still tweeting relevant content to your followers. Perhaps you’ve built a model or piece of terrain using a specific supplier – you can tweet your photo and summary as normal, then @ mention the supplier towards the end. This ensures the tweet contains the right content for your followers and also gets the attention of the supplier in hope of a retweet, reply or follow.

This is much the same as a mention but is often preceded by the word “via”. For example you may find an article on someone’s site from a year ago, their original tweet on the subject are now gone. You wish to share the article to others as well as let others know about the author. You can post the link and your own summary as normal then use “via @cadianshock” at the end to show who the original creator was. This gives the author credit as well as giving your followers a new user to check out.

A must on Twitter for anyone, hobbyists or not, images increase engagement rate dramatically. There are a few little, gremlins that are worth knowing about however. Not all images on Twitter are created equally.

Uploading images via the main Twitter web site is the best way to go. A tweet can contain up to 4 images, these are displayed in a nice grid on Twitter.com. By uploading images in this way Twitter knows exactly what it’s handling. It shows the images “inline” on their site and not as links. This is important as it means people can see your images right away and do not need to click a link in order to view them. It’s also worth noting that when using Twitter for images like this you get one link, that’s four images in one link. With a tweet’s real estate being at a premium as you only have 140 characters this is a big deal. Using a third party service may result in you needing four links for four images!

Third party apps all handle images differently, I use TweetBot which handles images as if you were on Twitter.com which is great. Hootsuite on the other hand uses a third party image service, Twitter doesn’t “know” how this service stores images and so Twitter will simply display a link to the images rather than showing them inline. This adds a click between the user seeing your tweet and then seeing your images. Instagram does the same, have you ever seen an Instagram image inline Twitter.com, didn’t think so!

When you’re adding images it’s worth thinking about how you use Twitter. It’s a nice experience to scroll down Twitter and see all the nice images of terrain, minis and games. It wouldn’t be a nice experience if each image required a click to view! 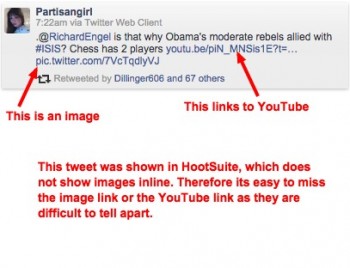 Twitter has become much better at handling links recently with the introduction of its t.co domain that handles links. In the past a URL shortener was needed to ensure that lengthy links didn’t take over your tweets and leave you with just a handful of characters to spare.

Twitter isn’t like Facebook when it comes to links. Twitter won’t pull in automatically an image to be used for the link. If you want an image to accompany your link you will need to add one yourself. There is a danger here that by having a link and an image, the image only gets clicked and not the actual link you want users to view. This isn’t an issue on some platforms as the image will be displayed in line and the link to another site will be obvious. The danger occurs on platforms where images are not shown inline and instead the user is given two links which are not always easily distinguishable from each other. 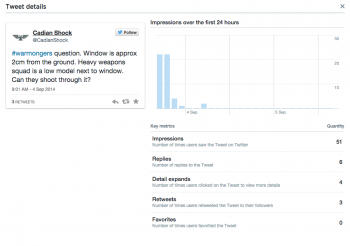 Questions are a great way of connecting with new people and learning something. I have asked questions about game rules, hobby issues and just general 40K stuff. They always get a response and the best ones provoke a discussion between yourself and completely new people. Here are some quick tips on questions;

Hash Tags were heavily covered in the last post about social media, but for completeness here are a few of 40Ks most popular;

That is all for now, next time its YouTube!