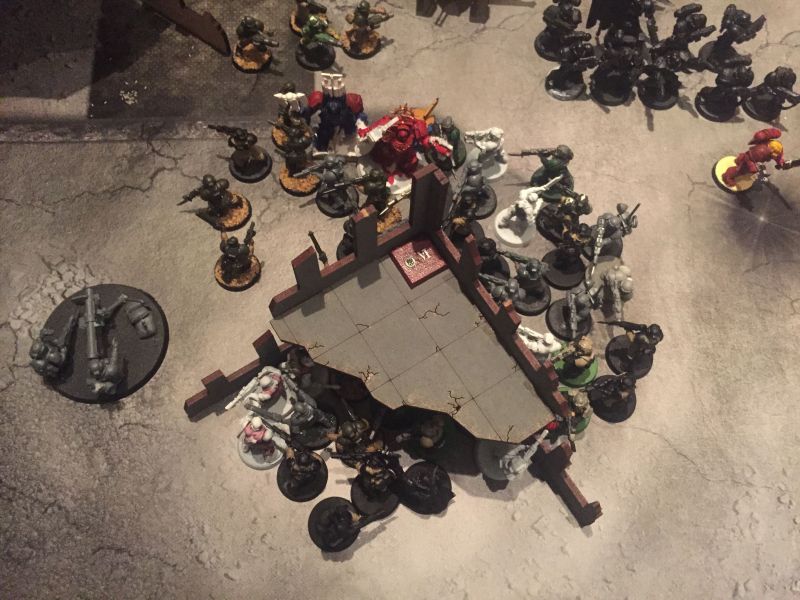 If you ever wondered why someone would take a group of 50 Conscripts, this report will show you….

Warning, this game is about 3 months old. Errors will be present. The final battle of our Tau & Guard Alliance Vs the Emperor’s finest. With the players now well versed in the other’s forces and tactics who will be victorious in this final show down?

We’ve 1,500 points a side, playing The Emperor’s Will deploying on the long table edges. This is the 3rd and final game between this two forces so lets see who can out do the other after so many games and learning for both sides. The Guard and Tau have won each game so far.

Terrain was placed by both sides as we wanted. The single Tau and Guard objective was placed in the centre of their deployment zone inside a 1 story ruin.

The Space Marine objective was placed inside a 3 story ruin just to the right of the centre.

Space Marines deployed first and were set to go first, but the enemy seized the initiative! There was no night fighting and no mysterious objectives.

This game is very infantry heavy for some reason. I think in previuos games some players have been stung by running our of Troops to score….

I have a batch of 24 Guardsmen on the go at the moment being painted so more models will be painted for my next game! Promise!