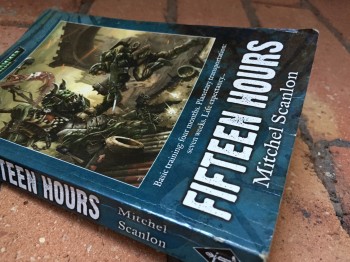 I have now finished my second 40K book, Fifteen Hours. I enjoyed the book but it wasn’t what I was expecting. The aspects of the Imperial Guard it did cover it did very well. But I felt like it was lacking in some areas, so here is my brain dump on the matter. You can pick it up from Amazon, used, very cheaply. Mine was 1p!

I don’t really know where I am going go with this article, lets see where we end up.


This will contain spoilers, so stop now if you plan on reading Fifteen Hours. I make no apologies for anything you read from now on.

I really liked the start of the book, the background of Larn and how he finds himself in basic training with a task master style sergeant is great. The training on his home planet was as expected, long days of gruelling training, again and again. And when his unit inevitably fail they are punished. It feels real, its saddening too, a young man torn away from his home planet at 17, away from his family and all he knows. It drew me into Larn and his life and then into his pain at having to leave, forever on the troop ship.

The drop down to the incorrect planet seems about as hellish as one might expect. Dropped in the wrong place, in no mans land and then your commander is killed by an opening door! Thats a poopy day at the office!

Once dropped and planet-side things seem to tail off for me. The first half of the book feels immersive, I am learning about Larn, his life and about the upheaval he is feeling. You’re on a journey with Larn being flung from one situation to another with absolutely no control at all. It is all leading to something, some unknown event in some unknown place.

And there for me is the problem, its not an unknown event in an unknown place. The start of the book clearly shows that at some point Larn is shot in no mans land. So the second half of the book is spent waiting on that fact, for Larn’s inevitable fate in no mans land. The waiting I didn’t like as I wanted to know if that was the end point or not? Would Larn die there? Or be saved and that in fact wasn’t the end of the book?

While this doesn’t seem like a major issue it did focus my mind on that final event. I was just waiting to see when this known event would happen. The story that takes place in the trenches with Larn and his new squad mates is good. It depicts perfectly the constant waiting, the hardened veteran characters, the unknowns of war and the tense firefights for survival. What I felt like it didn’t do was entertain me, grip me or move the story forward. Once Larn touched down nothing much seemed to happen, which I am sure is accurate for life in the trenches for most of the time. But it didn’t make for a great second half.

I have an addiction & it is glorious