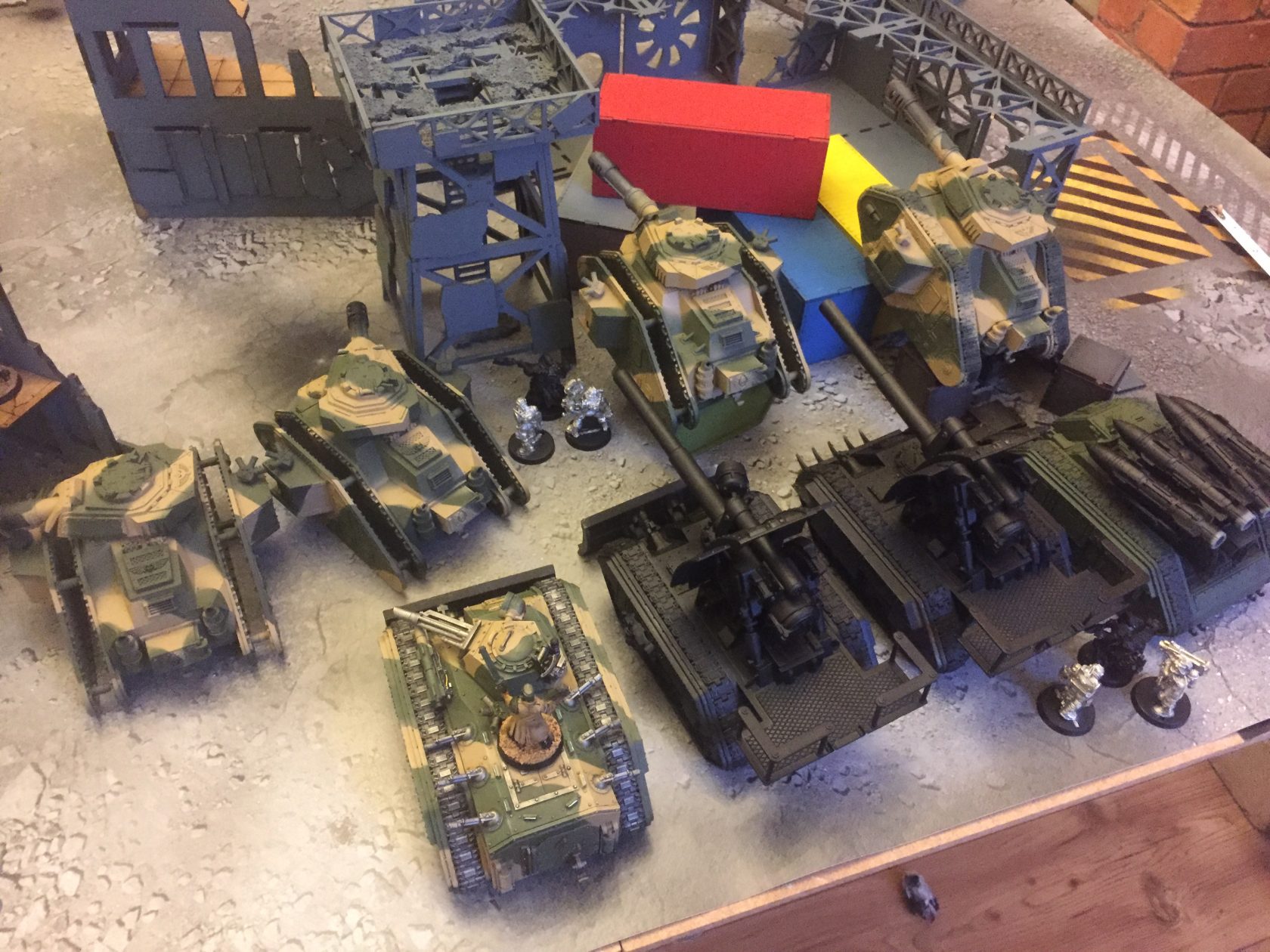 This is my biggest game ever! Its taken three years to get to this point, although of course a lot of stuff needs painting still but I am getting there! 3,000 points of Astra Militarum vs Dark Angels using The Emperor’s Will mission. But we will focus on a huge mistake on my part with the Emperor’s Wrath Artillery Company.

I mainly wanted to write about this battle because I used the Emperor’s Wrath Artillery Company Formation and it failed me terribly. Or rather I failed it terribly. It was, in hind sight, a simple mistake that caused the formation to lose its main benefit feature. And I wanted to share this with you so that other Commanders did not make the same mistake and find them themselves before a Commissar being questioned about their lack of tactical planning. 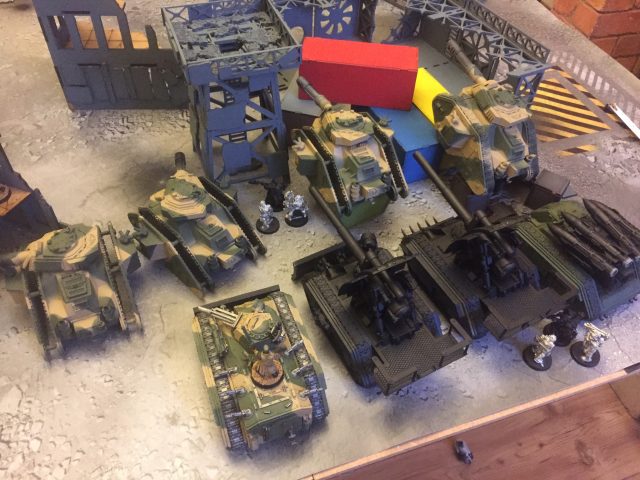 The mess up was two fold;

My list consisted of a 50 Man Melee Blob. I made the list with this 50 man blob and it had one Vox-Caster in it. I thought;

One Vox-Caster will be fine he will be able to see SOMETHING and he will be well guarded in amongst such a mass of bodies.

Then due to deployment zones my Vox man could not really see a lot f he was to deploy where the blob was going to deploy. So I broke off ten of the Guardsmen and they formed their own unit. That gave me a blob of 40. I am unsure if this was legal actually – when are you meant to make the decision regarding blobbing up?

The ten man squad (with the Vox) I then deployed in a building which was four stories high. This gave them a good view of the battlefield. Perfect. I had lost of mass of bodies to protect them but that was OK. I was in a ruin for a 4+ Cover Save or 3+ if I went to ground.

What was not perfect was that in the Dark Angel’s first turn, Psychic Shriek was used against this ten man squad and I rolled three sixes. As detailed on my Tales of a Guardsmen page. That was ten dead Guardsmen with no saves at all allowed. My only Vox-Caster was gone. Turn one, before even a shot had been fired.

The below image shows how they were split and how the Vox Squad (on the right in red) was spread about in a ruin. The blob were on the ground, awaiting some melee. 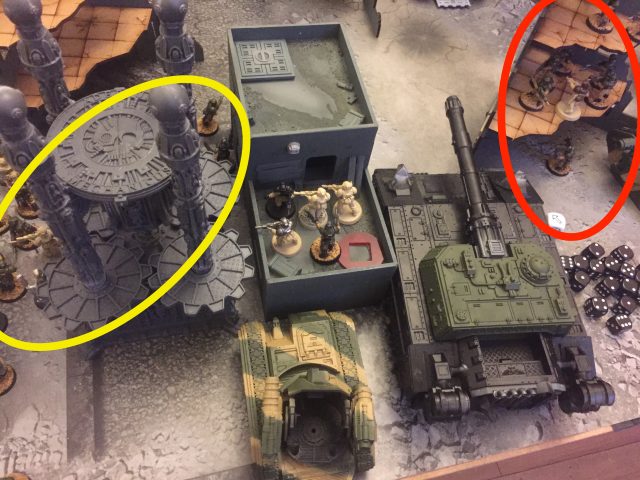 Red is my Vox Squad, Yellow is the main blob. The main blob its spread way out to the left.

Without the Vox Caster the Emperor’s Wrath Artillery Company lost its Twin-Linked ability which simply meant that everything missed from then on. During the whole game the two Basilisks killed four Tactical Marines and did 1 or 2 Hull Points to a Land Raider. This Land Raider never died for the whole game. That was 250 points of Basilisk that did practically nothing. The Manticore faired about the same, missing a lot of the time and killing four Tactical Marines late in the game. Just before it was assaulted and died with one missile left on it.

The obvious solution is to take more Vox-Casters. But how feasible is that?

While they are only 5 points a piece that soon mounts up and all of a sudden you have taken a Power Fist’s worth of Vox-Casters or a couple of Lascannon upgrades for your Veterans. But perhaps its worth it? Spreading more Vox-Casters about the force – say five. Thats 25 points to give my two Basilisks and Manticore Twin-Linked.

If my maths is right then;

this gives your Basilisks and Manticore a 55% chance of rolling a hit.

Which, when I read it like that it’s not to shabby. Considering at the moment it felt like they missed on nearly every turn because their chances of rolling a hit are usually just 32%. The re-roll doesn’t really help with scatter I don’t think because you HAVE to re-roll every dice. You cannot do this;

Oh, the arrow is in the right direction let me just re-roll the distance dice and try and get a very low number.

So for the 25 points of extra Vox-Casters I can hopefully hit a lot more often. And keep a couple of Vox operators alive long enough to be useful.

This of course assumes I have five groups of Guardsmen to take the five Vox-Casters. I don’t think I should take Veterans or Guardsmen just to be able to take more Vox-Casters. I should just add them to the units of infantry I normally take.

Bearing this in mind the total cost of an effective Emperor’s Wrath Artillery Company would be around 570 points;

I don’t take Wyverns in this formation and don’t plan too. They already have Twin-Linked and Ignores Cover and so cannot benefit from the formation’s rules as much as a Basilisk can. Granted they are a nice way to cheaply fill out the formation. But I would rather go big!

570 points is a lot of points for a 1,000 point game, plus the cost of the infantry needed for the Vox-Casters but I think its viable at 1,250 points plus? But this makes up my plan for using next time, more Vox-Casters spread in multiple units to safety and line of sight across multiple areas of the battle field.

How has anyone else got on with the Emperor’s Wrath Artillery Company Formation?