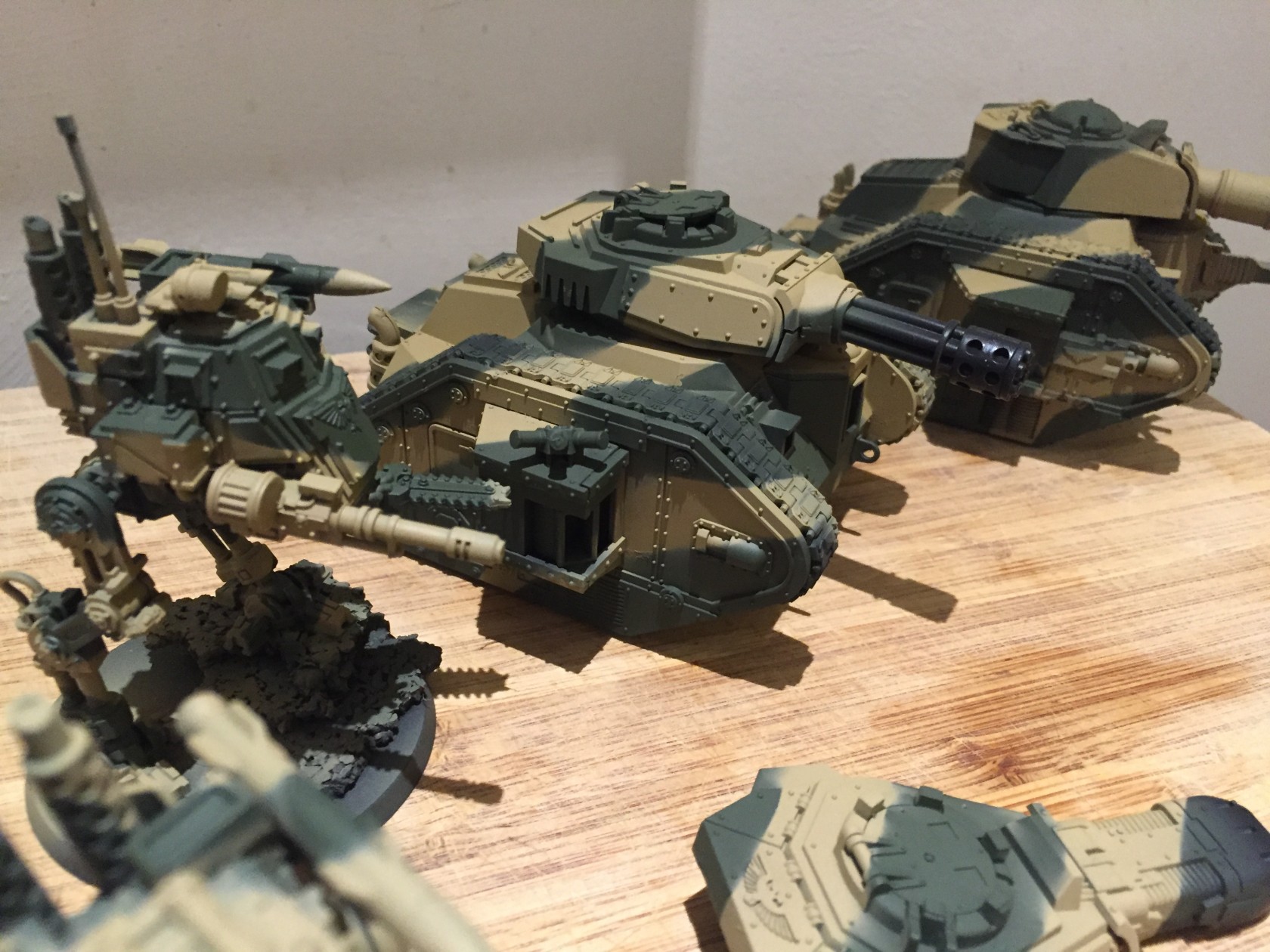 A brief look into the "Emperor's Fist" Armoured Company

With the main detachment out of the way we can surge on (*cough* it’s been over 120 days since I started writing this article) and take a look at a half decent vehicle based formation available in Mont’Ka and the Cadia Supplement from Black Library. The “Emperor’s Fist” Armoured Company formation seems to be a good contender for a staple element of my future lists.

With the following rules;

Battlefield Doctrines forces your opponent to roll two dice on the vehicle damage table and pick the lowest if the Leman Russ is within 6″ of an Enginseer from this formation. Note it’s the actual model that’s within 6″, not the unit, at least the Enginseer will be constantly obscured from view by hulking  great Leman Russ Tanks all around! Also, any ideas on how this might work with Tank Hunter? 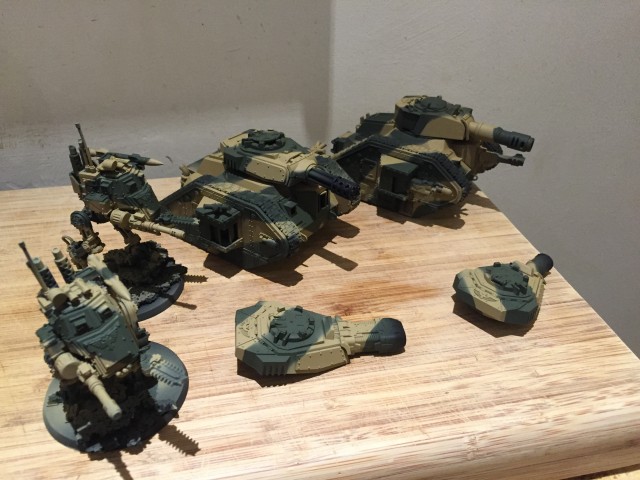 This benefit isn’t limited to a formation or to the detachment, its any Leman Russ squadron within 12″ of the Tank Commander. Which gives this heirloom some decent effective range and therefore uses.

The Full Throttle (Flat Out 6+D6″) is going to be useful for moving up the field together as one. Without this across all your tanks some may be left behind or isolated and ripe for plucking. Moving them together as a massive unit of AV14 is going to be really daunting for your enemy. Forward!

Strike and Shroud (fire and pop smoke) orders are going to be useful with Kabe’s Herald when trying to keep all your Leman Russ safe for a turn, possibly the first turn when your opponents fire power is at its most devastating.  The Kabe’s Herald ensures they are all equally hard to hit and may take some pressure off your Leman Russ Tanks for a turn as they are in smoke. It also allows them to still fire which is usually forgone if you pop smoke. You can therefore move 6″, fire and pop smoke – giving you a 5+ cover save even in the open. Or as Rumpeltroll on Reddit pointed out with Camo Gear you can get a 4+ in smoke.

But I don’t see the above being used as often as the Split Fire order. Allowing all Leman Russ squadrons within 12″ to split fire one model is a really big deal. You’re going to be able to prioritise targets very effectively; shooting ordnance weapons at vehicles, Plasma at armoured infantry and Punishers at soft targets. A glorious moment for any Astra Militarum player!

These are my thoughts regarding the formation, the Cadian Heirloom and how they can gel together to create an impressive force.

I had immediately dismissed this when I first read it. I hardly ever Tank Shock as it kills nothing of the enemy (usually) and its effectiveness can be fairly limited as it only forces a leadership test and a fall back move. Plus you could get your beloved vehicles glanced, immobilised or destroyed in the process. I have rammed before I think, with a Chimera, but not a Leman Russ. They seem too slow to get up and in the right place for a decent ram.

But now I think that Tank Shock is going to be a really viable option for this formation. Firstly we have the ability to give the same order to all Leman Russ squadrons within 12″. This means we can move all our tanks 6 + D6″, plus their original 6″ in the movement phase. This gives us the ability to move, but forgo shooting, between 13″ and 18″ in a single turn. Which is unheard of for Leman Russ, especially for so many at the same time! Therefore we have manoeuvrability. While you cannot do this Flat Out movement in the same turn you Tank Shock or Ram, it does give you some decent move distance in the turn before to get into position, or afterwards to get away. Thanks to Oakenhawk for letting me know that this was perhaps not as clear as it should have been in my first draft.

With the minus one leadership modified for all tanks after the first from the formation you can fairly easily reduce a units leadership down pretty quickly using multiple Leman Russ. You don’t want to be doing this against units with Melta Bombs for obvious reasons, but piling them into some Tau, Eldar or Orks might be a handy little trick. You might even be able to Multi-Tank-Shock a unit, if thats a thing. Forcing a unit further and further back. But again I question the usefulness of that. What are your thoughts on this tactic?

Now with the Ram we take the AV14 from the front and half it, giving us a S7 hit. We then add two for being Heavy and then another one if we have a Dozer Blade. This gives us a guaranteed hit at S10 + D6, with no saves at all from the Ram (perhaps an invulnerable save?). We can of course remove the Dozer Blade and get the bonus from the formation. The formation requires at least five Leman Russ, if you can manoeuvre your tanks correctly you might be able to get five or more S10 + D6, which is an AV11 auto glance. Its a shame that Strength cannot go above 10! This would have been useful in a few situations I have found myself in, as they are guaranteed hits, cannot miss, cannot be saved from cover and cannot scatter back onto your own guys! Just a big crunch a whole load of auto glances. But I seriously question the usefulness of this ramming bonus, I always take Dozer Blades so I am at S10 already, I am maxed out so the  formation’s ram bonus is useless.

Finally, if you are moving up quickly using 6 + D6″ remember that the Enginseer(s) is going to find it hard to keep up!

Taking the Kabe’s Herald with the Tank Commander in this formation and keeping them all close by with the Enginseer(s) is going to give you an extremely powerful little ball of tanks. They will all be BS4, all be getting which ever order you need regularly, all will be getting lower than normal results on the vehicle damage table and if you get some Servitors in there with the Enginseer(s) repairing Hull Points and vehicle damage too. All of a sudden we have a really formidable force of Leman Russ from this Astra Militarum formation!

The cheapest way you can get this formation is to go with a single Enginseer and all Leman Russ Eradicators which comes in at 670 points and about £163 at full Games Workshop prices. Which is a fair old whack of cash, but the points cost is relatively low and can easily fit into a 1,000 point list made up of Veterans, a Company Command Squad and something from Fast Attack. It’s going to be a fairly short ranged formation at 36″ and so might need to deploy and move aggressively. A risk for over 65% of your points. But this list comes out at 1,000 points using the “Emperor’s First” Astra Militarum formation using models I have;

By going with the above minimum configuration you can get the formation and all its lovely extra rules, but you’re not going to be making the most of all the Leman Russ variants and what they have to offer. As for the most effective configuration, I do not know as this will depend on the models you have and the types of opponents you face most often. If you play against Elder Jet Bikes a lot then the Ignore Cover Eradicators will be helpful! Otherwise a mix of Leman Russ might be handy to Split Fire as required and give you a good base of fire that can take on anything.

I would be really interested to know how other players use this formation to great effect with multiple Leman Russ?

You’re going to need at least five Leman Russ and a single Enginseer though to field this awesome bubble of destruction. I have two at the moment with a further two to complete. So I am nearly there! After finally finishing this little write up and seeing how powerful this formation can be I should start completing those tanks and get the Emperor’s Fist into action!

Finally, I put together a kind of Armoured Company Death Star – check it out towards to end of that link!

Hobby Tray – Easing Back Into Hobby