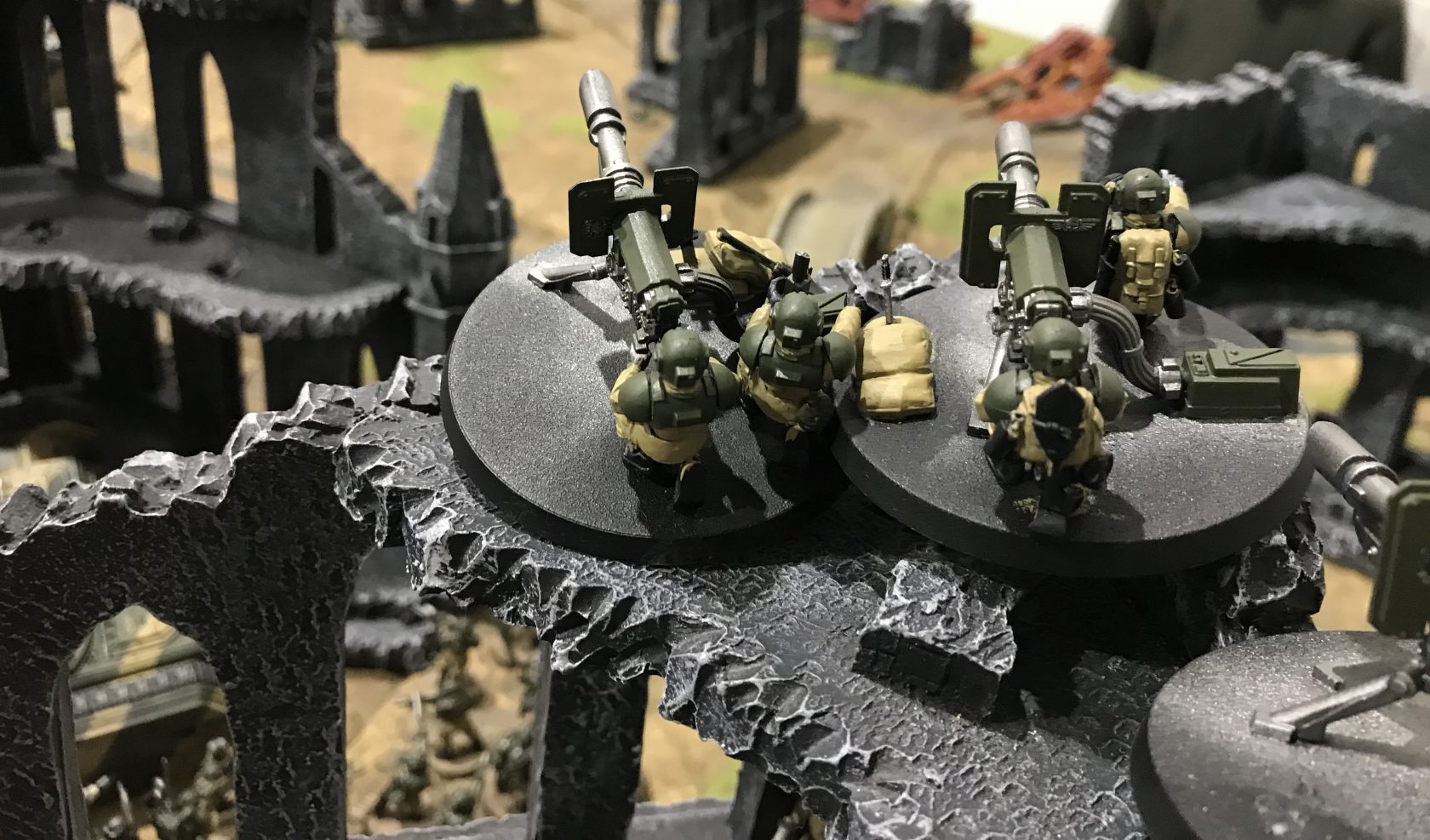 Only a very quick write up I’m afraid for this game because we lost track of time and then ran out of time. Curse you time! We’ve 1,500 points of Astra Militarum versus Eldar and Necrons today at Boards and Swords. 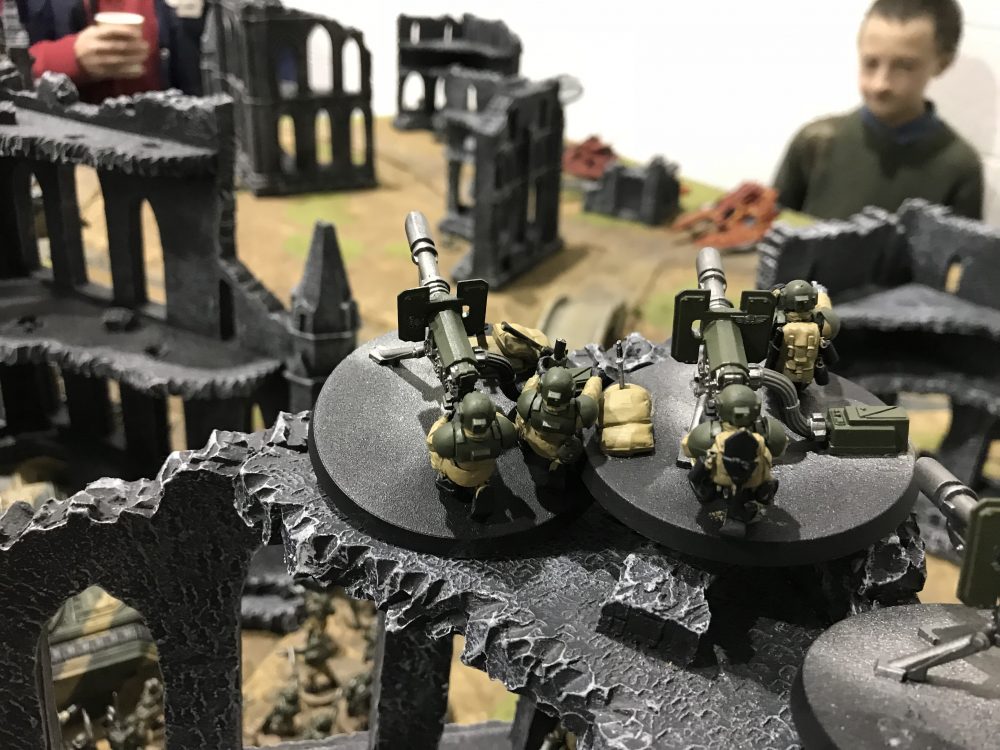 We played Maelstrom of War and rolled for a mission. I forget its name, possible Escalation, but we drew up to the turn number for the cards. Turn one, one card, turn two, two cards, etc.

We also needed to nominate a card type. I chose Purge, they chose Annihilation. If you scored your type you get 1 extra VP. But if you discarded one of your type you lost a VP.

We used the long sides of the battlefield to deploy. I created a little castle of infantry, Wyverns, Creed and Heavy Weapons Teams.

The Eldar spread out. The Necron Warriors and two Necron characters set way back in their deployment zone. Weird. So I thought… 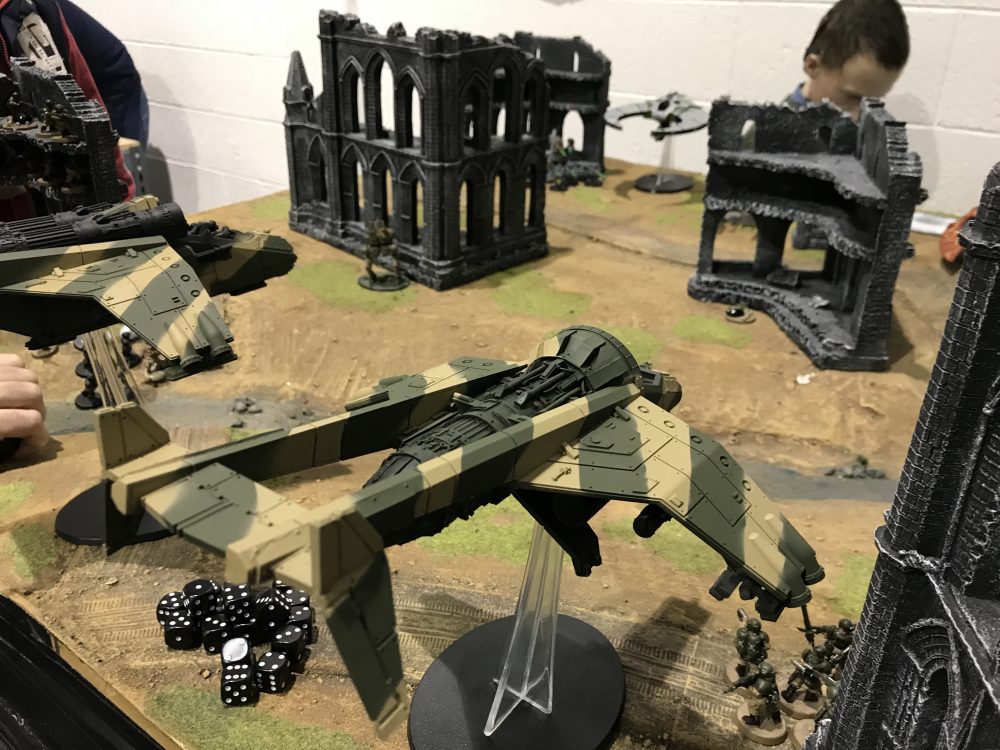 The enemy went strongly after the Valkyrie which was carrying a Psyker, Tarrick, the Crusaders and the Command Squad of Plasma. It survived with 9 wounds remaining.

The Necron Warlord with his Warriors jumped into a teleporter and appeared in front of my infantry. So that’s why they were so far away – it didn’t matter! Their shooting didn’t kill many of my Guardsmen thanks to the ruin they were cowering taking cover in.

A Sentinel that has stalked forward before the game begun took a hammering and was down to two wounds.

The first card drawn by the enemy was to hold objective four for two turns. Objective four was under the bridge in the table centre. The Eldar places a Wave Serpent onto this objective.

We’d weathered the first turn. And there was no First Blood. 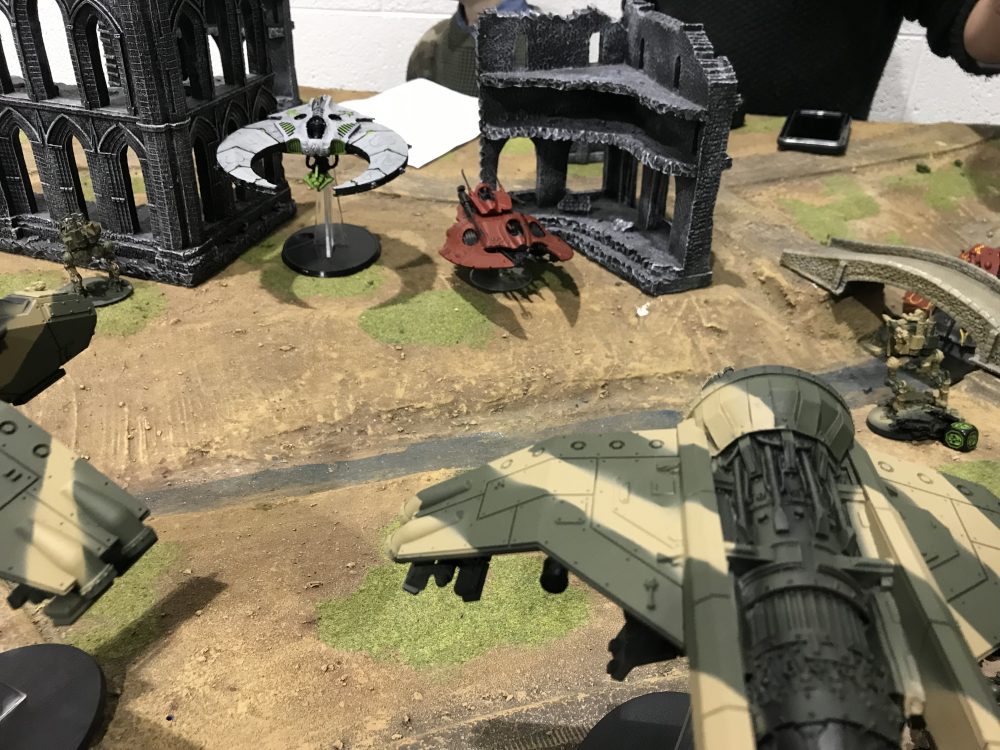 Old Grudges was used against the Triarch Stalker with no effect thanks to its shielding. Which I was unaware of. A Lascannon shot of five wounds was simply ignored. Argh!

It was now hard to decide what to go after. The Wave Serpents which reduces damage by one or try and pepper the Triarch Stalker to death using 1 Damage shots. I forget which I went for, either way it wasn’t spectacular as I can’t remember what happened! 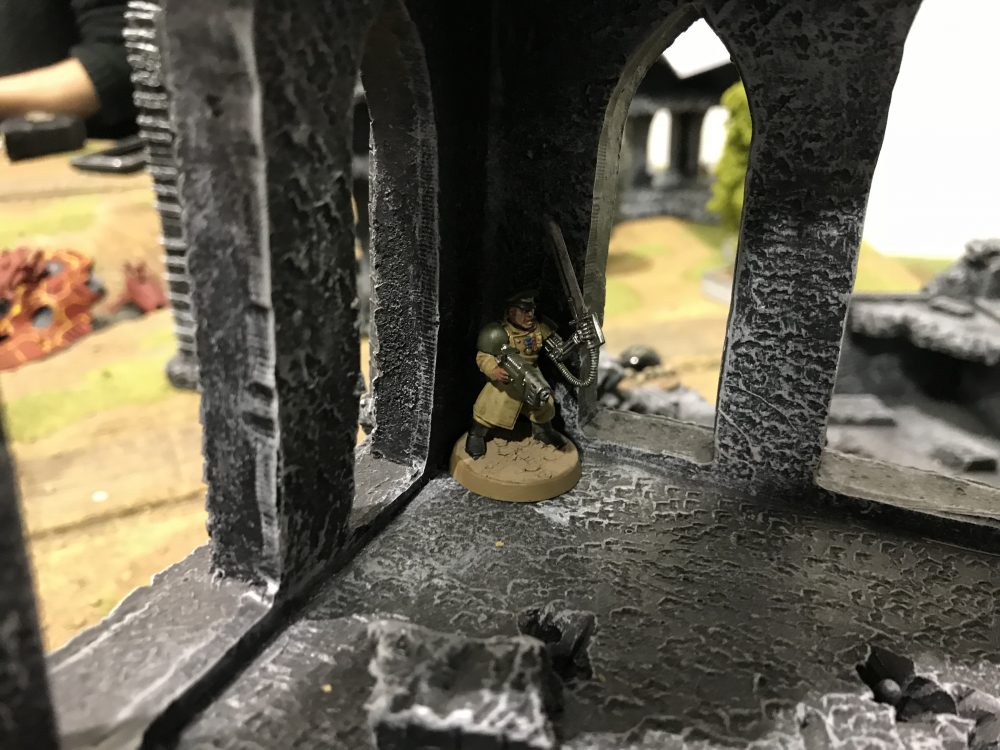 What did happen was Yarrick, the Psyker, Crusaders and the Command Squad Grav-Chute drooped from the Valkyrie to snipe the Eldar Farseer on a Jet Bike. Psychic Maelstrom was cast then I rolled a one, I needed a 2+ to do a Mortal Wound. The Command Squad then opened up and wasted the Farseer perfectly. First Blood and Slay the Warlord to the Astra Militarum!

The Crusaders made their charge into the Wave Serpent in the middle but did either one or zero wounds. 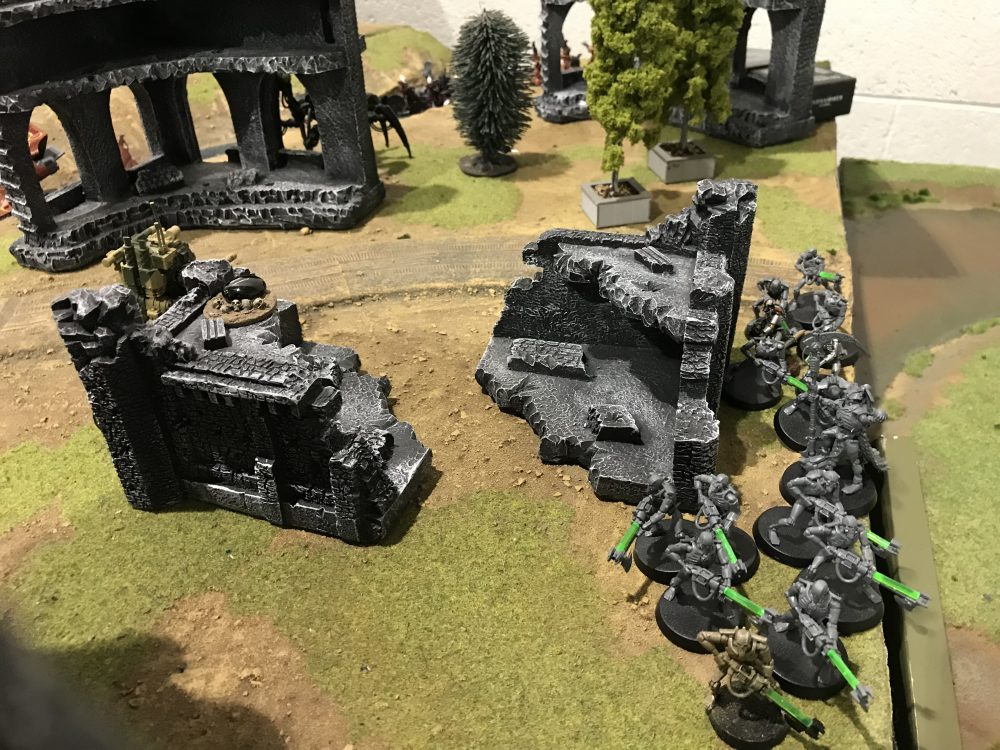 Necron Warriors Teleport to me!

The enemy pulled Overwhelmingly Firepower for their second card. Destroy one thing for 1VP or three things for D3 VPs.

So they went for it in the shooting phase. And it worked. They got their three units; two Sentinels and the Valkyrie. Luckily the Valkyrie didn’t explode.

Unfortunately, the D3 resulted in 1 VP only.

The Necron Warriors and Warlord that teleported into my frontlines shot up more Guardsmen but the squad remained. 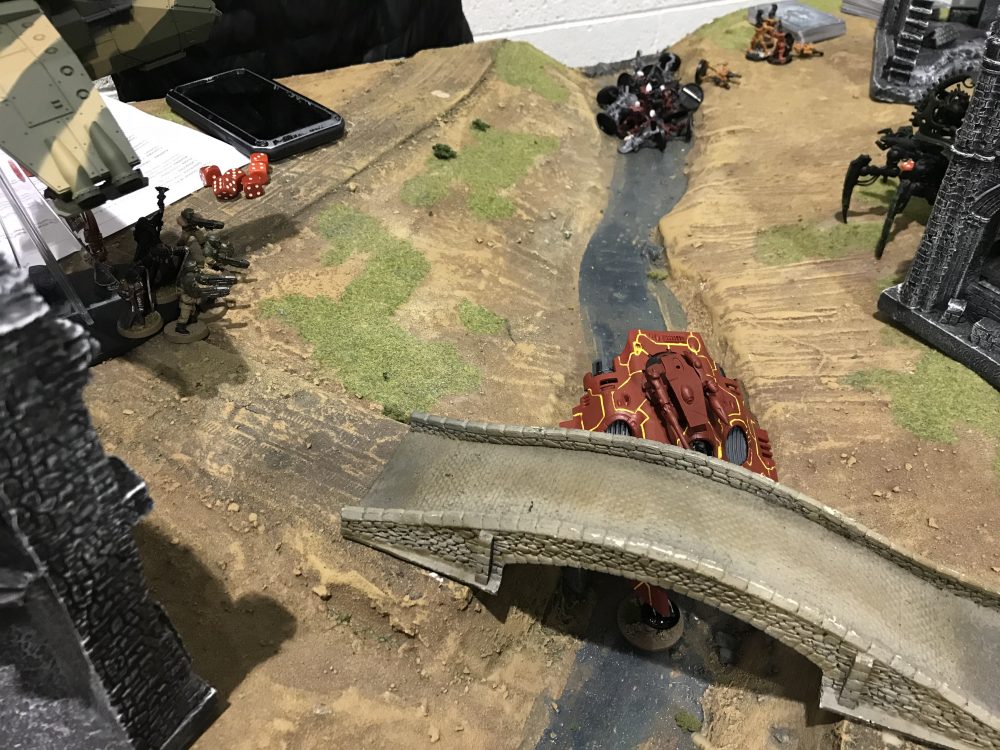 Yarrick and crew can be seen top left

We were sadly nearly out of time so this was the final turn. The current score was 3 – 3. I needed a single point for this somewhat small victory. I drew a card to secure an objective. The Triarch Stalker was on the objective.

The Crusaders could make it with an Advance, which they did with an 11″ move in total. That gave for two models on the objective to the enemy’s one. 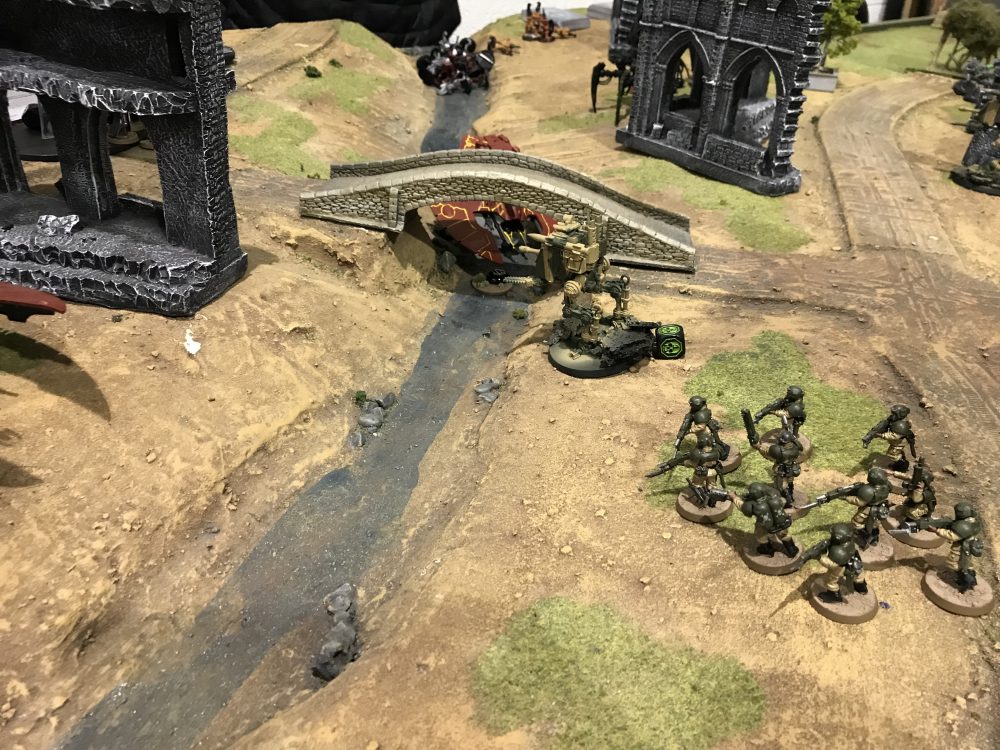 The battle for the centre

And that was that. An Astra Militarum victory after two turns. Who knows how the game would’ve gone.

It was good to use Old Grudges again but the target was a bad choice because of its ability to mitigate the multiple wounds from my Lascannons. 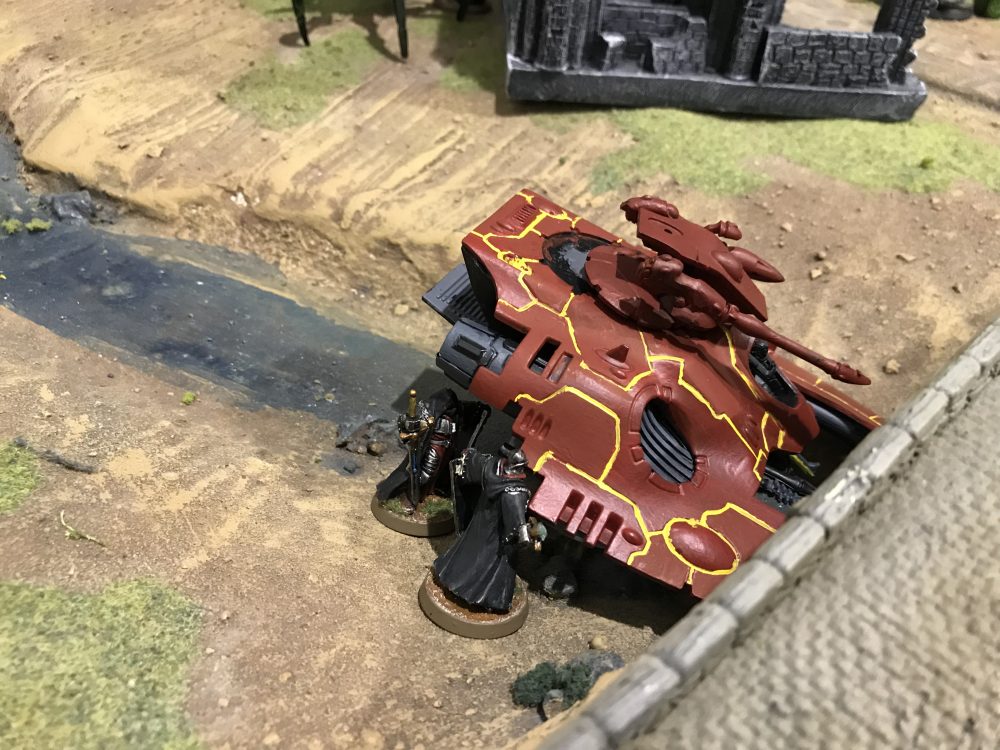 Crusaders before they fled for their objective

I have stopped doing a batch of 21 Heavy Weapons Teams because that is insane. What was I thinking? The good news is they all have their green and tan colours completed now.

For now I am just doing three Autocannons and progress looks decent? 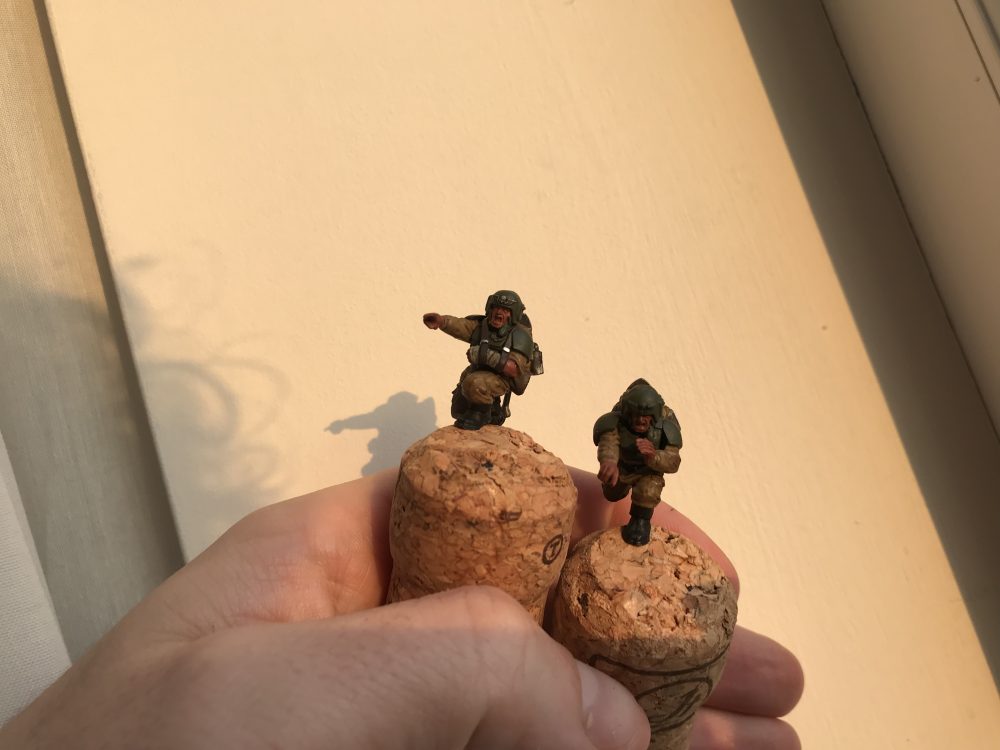 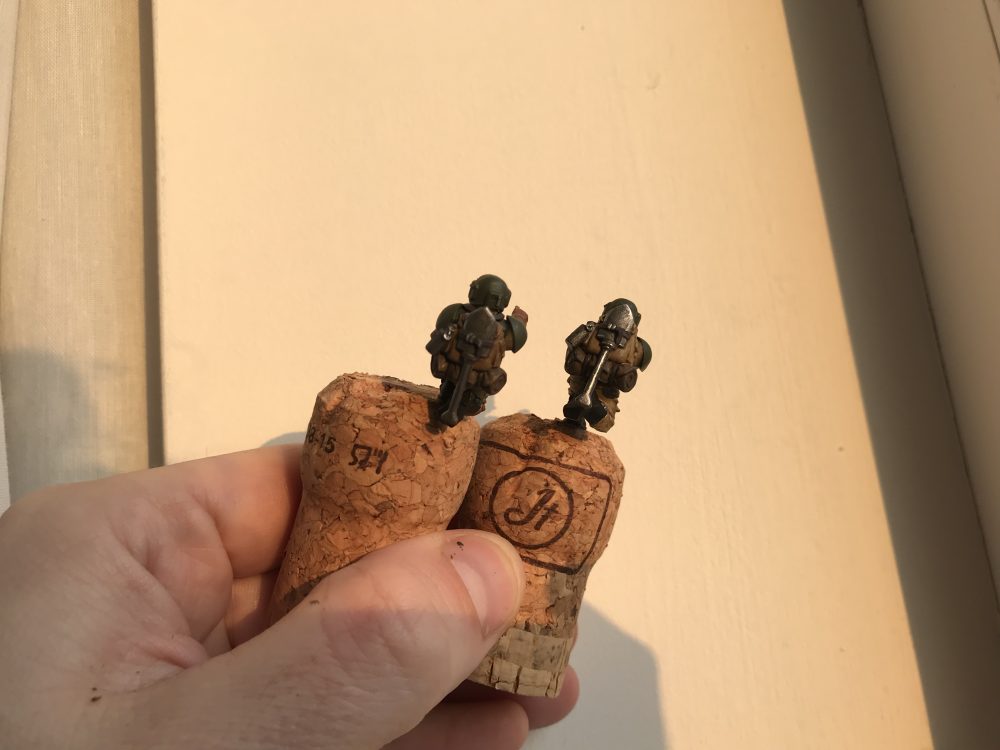