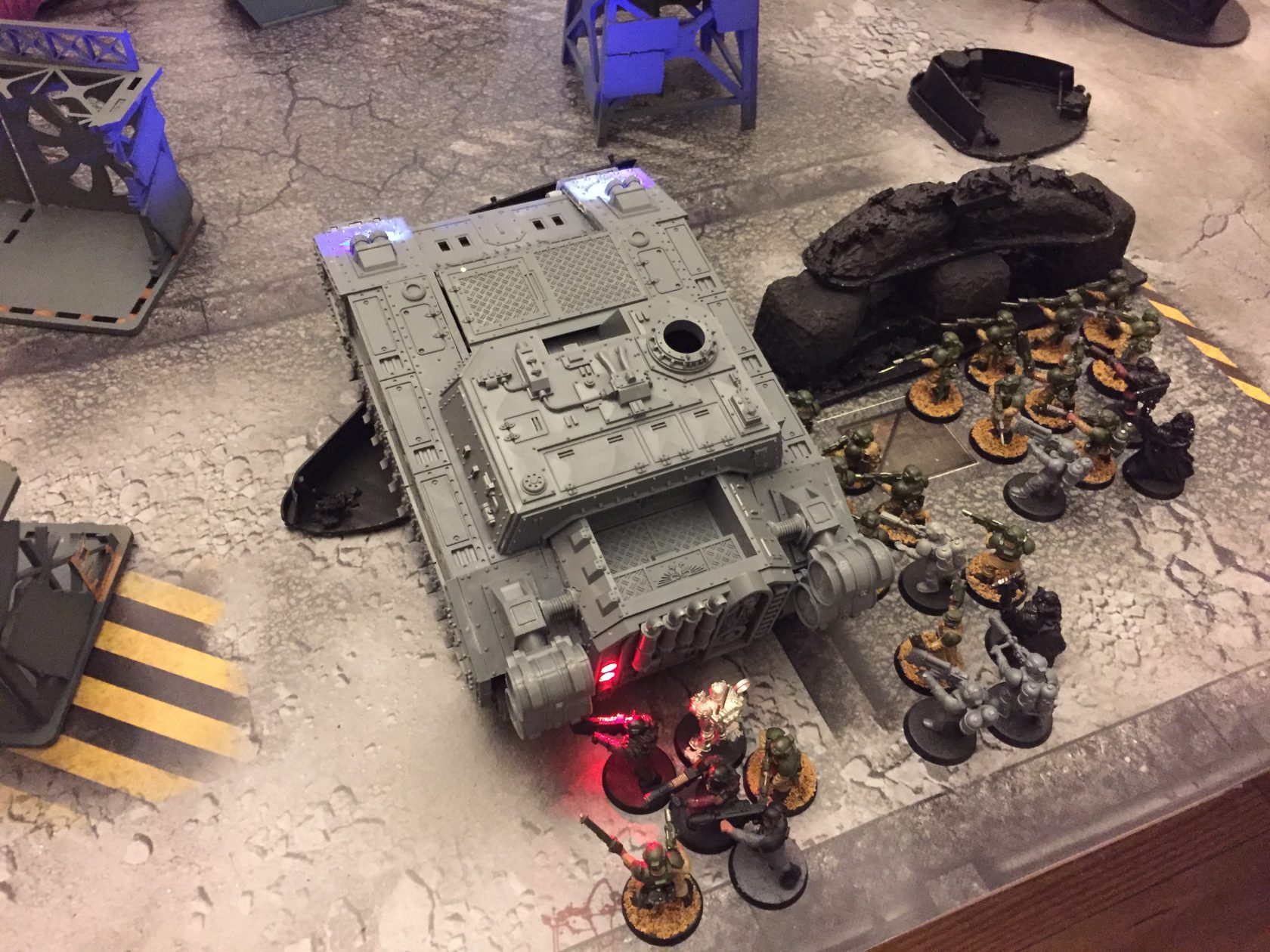 The Doomhammer - how did it perform?

I got a little Christmas game in recently and I’d created a kind of a I don’t care/fun list. I don’t care because it might not be fun for the enemy and fun because there is 400+ points of a Super Heavy (Doomhammer) in there that I have never fielded before. Oh and a Vulture which never fails to rip apart something on the turn it arrives.


This is a look at the Doomhammer Super Heavy and how it performed – as I’ve never fielded anything like this before this article is somewhat of a learning exercise for me. And what I learnt is that fun lists are sometimes far from fun…

This article perfectly demonstrates the meaning of new model syndrome.

We often just play a mission type everyone is OK with. So this wasn’t optimised for Maelstrom, Eternal War or a Kill Points mission. The list is for a 2v2 game so I’m going to have a random ally of some sort. Could be CSM or Tau or Necrons. We like to ignore the fluff.

I started out with the Baneblade which took up about 540 points I then started replacing it with the cheaper variants because 540 out of a 1,000 point list was just too much. I couldn’t field other units that felt effective and useful. So I’ve landed on the cheaper Banesword.

It has a 10″ blast at S9 AP3 with Earthshock. So that’s going to ruin someone’s day I hope. It’s not going to insta-wipe five Terminators with AP3 but 10 Marines or 5 Bikes – no problem. The hull mount I am worried about though because once it starts moving forward it’s really going to suffer from the lack of a turret. And I want it to move forward and draw enemy fire away from my more squishy targets. Plus it has a minimum range of 24″.

Now I’m feeling like it’s a terrible choice because it’s not AP2 and has a minimum range. Although the latter might be meaningless from what I remember. I do like the idea of a 10″ blast though.

So now I’m taking the Doomhammer which is 10 points cheaper, doesn’t have a minimum range and is a 5″ blast at S10 AP1. The 10 spare points I spent on Volkov’s Cane for my Commander.

This feels like a better fit for the list. It’s still hull mounted with a 45 degree firing arc but has no minimum range, plus it can move and shoot just fine so adjusting each turn it’s direction should be OK. The higher Strength and lower AP feels like it’s going to be more useful, especially versus vehicles.

I’d like my troops to fit snugly in behind the Doomhammer (at this point I’d like to point out I’d forgotten it can transport 25 models) and move up the board as a single blob of hurt. If the Doomhammer can shield them from view that would be great.

Unsure of what orders might be of use for the Commander to throw at the Veterans or his own Plasma Guns. Possibly Tank Hunter on himself for some extra chance of vehicle penetration. The Veterans and their Flamers can of course benefit from Get Back in the Fight for a cover save and then act normally. As for other orders that are good for Flamer Veterans, I’m at a loss off the top of my head? Perhaps the Shoot & Run Order or the Pinning Order.

I love this model (still) and it’s effectiveness on the table. BS4 versus ground targets and Twin-Linked gives a lot of hits. Against soft targets like Firewarriors and Kroot it excels and even against Marines it chews through a fair few easily. Oh and Vector Dancer too.

Doomhammer Game 1 – Allied with Tau Vs Necrons and Chaos

Myself and the Tau deployed first and went first. The Heavy Bolger and Main Cannon were the only thing in range of any enemy so they fired at the Necron Scarabs. After scatter it hit the Necron Heavy Destroyers, the blast clipped one and killed it.

Enemy turn 1 and the Doomhammer was dead. Gauss fire from 10 Necron Warriors, plus the fire from a Ghost Ark plus 10 Warriors in the Ghost Ark saw exactly 9 glancing hits go against the Doomhammer. A huge explosion later and I’d lost just a handful of Guardsmen nearby – thankfully.

But that single event i believe meant myself and the Tau lost the game. 420 points gone in a single shooting phase was a poor poor start. It has kills one enemy model worth maybe 50 points! I knew people didn’t like Necrons and now I know why.

I was glad I’d forgotten at this point it was a transport and hadn’t loaded it with my Veterans. 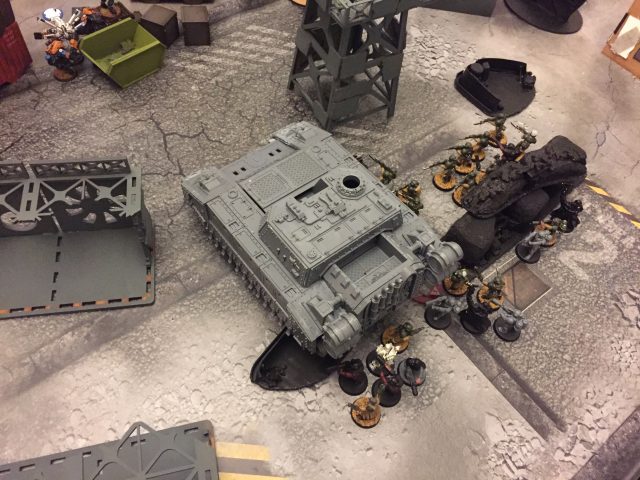 Doomhammer before the event 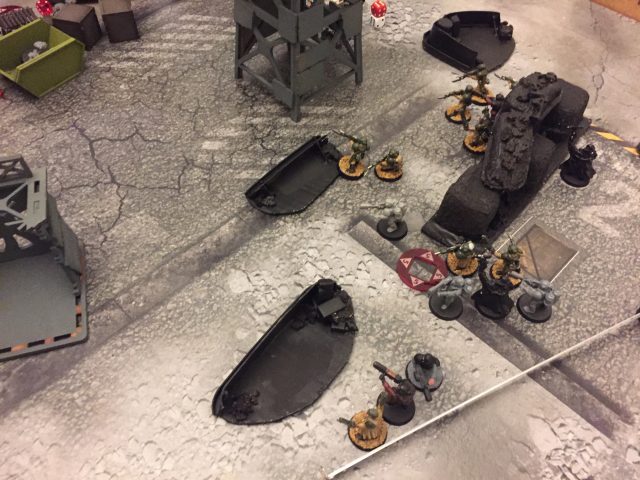 Doomhammer after the event

After a roll off I was paired with Necrons this game and I was sure the Doomhammer would be a lot safer. The Chaos and Tau had the odd S9 and S8 weapon so I wasn’t worried that game 1 would be repeated.

During the course of both games I didn’t roll a single hit for scatter. In this second game I scattered at least once so that I hit nothing, another scatter meant I only hit a single Cultist (which died) and finally it killed a single Crisis Suit. 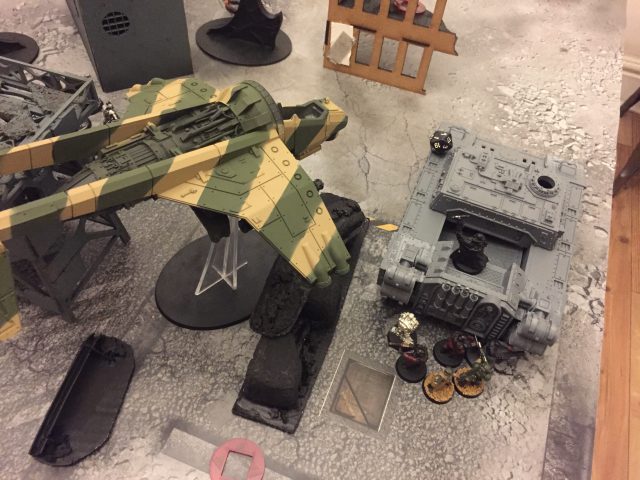 Doomhammer and Vulture with CCS at rear of the Doomhammer

It’s terrible. I’m failing to see why you would take this variant or any other hull mounted blast based variant over the Baneblade or Hellhammer – both of which also come with an Autocannon and a Demolisher Cannon (they’re of course more points). Even the Stormlord is really attractive now as it would at least hit something!

The drop in points from a Baneblade or a Hellhammer is around 120, which is a lot. But it doesn’t account for the fact those cheaper options have a single blast with BS3. At worse a 10″ blast with BS3 will end up 9″ from its original target, factor in the radius of 5″ and it’ll move only 4″ from its original point. Which is not bad – you’ll still probably hit something in a squad of ten enemy troops. But you’d probably miss a Rhino or a Land Raider.

That’s all worst case though – so it’s rare. At least with the Hellhammer and Baneblade the worst case as a fallback in the form of the short range Demolisher Cannon and the Autocannon.

Perhaps I’m simply missing the point? And I should take the cheaper variants but then add in the Lascannon Sponsons to ensure I end up hitting something?

How do you use your Baneblade type Super Heavy? Or have you faced one and found it easy to deal with or a nightmare to kill?