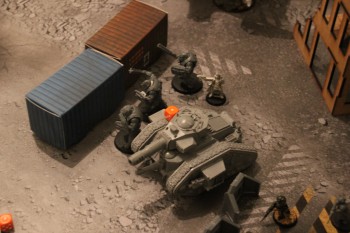 I’ve had a game recently, 2,000 points of Space Marines VS Tau and Imperial Guard. Here is  the list I used for the game, it’s 1,000 points. My aim was to screen the Tau and my shooty units with a blob from the rampaging Blood Angels. That screen of meat would soak up fire and melee while everyone else shot. Here it is;

The game has already taken place. I’ll be writing it up on The 40K Battle Directory soon. But I’m interested in what the thoughts are on my Guard list?

Seems a bit thing on the ground doesn’t it!

All thoughts are welcome! You can expect the Battle Report and follow up article soon!

After some of the comments its worth noting that the Space Marine side will be lacking in vehicles. There only likely to be fielding Land Speeders and Dreadnoughts. Hence we’re light on anti-tank weaponry.

The Battle Report from this game can now be seen on The Battle Directory.