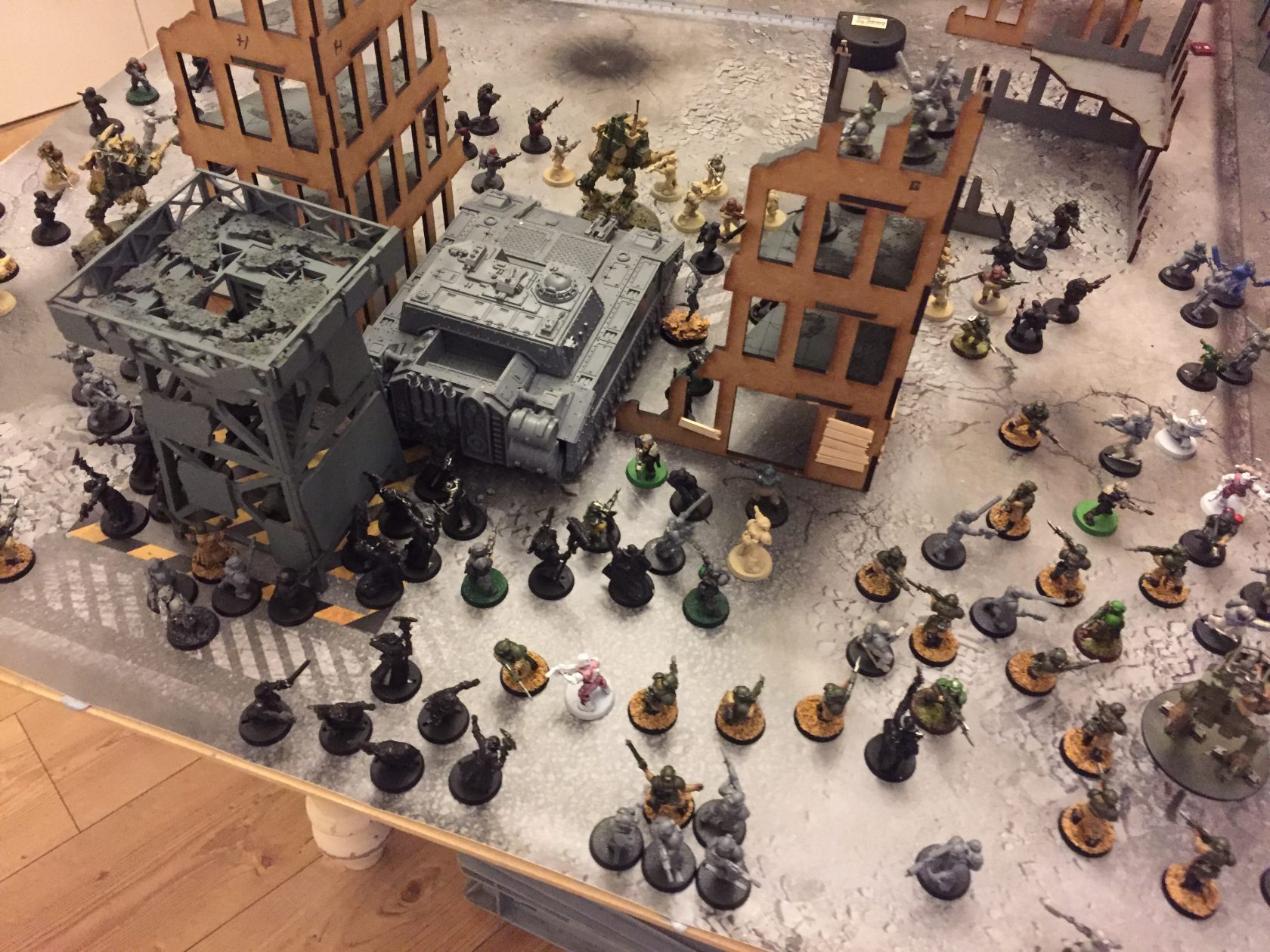 It’s that time of year again folks! Time to play my Salamanders buddywith his Drop Pod list and try not to be totally destroyed. To this end it’s time for a change of strategy. Gone are the lists of 7 Leman Russ and an Infantry Platoon backed up by Raven Guard allies with Shrike. In with some Astra Militarum Formations including the Cadian Battle Group with 175 Cadian Guardsmen.


So I made this list and organised a practice game with a friend. The enemy’s list was based on what my Salamanders friend had brought before and the new models I knew he had. The practice was, well, for practice to see if it going to be effective and if the plan would last past the first turn. Having lost so many times to the Drop Pods of hell it was time to beat the Salamanders and a if a practice game was what it took, then a practice game it was.

I also had to see if taking the list was viable as I was traveling by train! It’s a three hour trip with one change. So this was a good way of getting everything out to see if a) I had the models and b) how much space they all took up.

I say 2,500 points plus because I let my opponent have more upgrades and go over 2,500 for the practice game – just to ensure it was going to be tough. We have to use coffee tins and Diet Coke cans for the Drop Pods because we don’t own any! So thats what they are if you spot them in the pics. 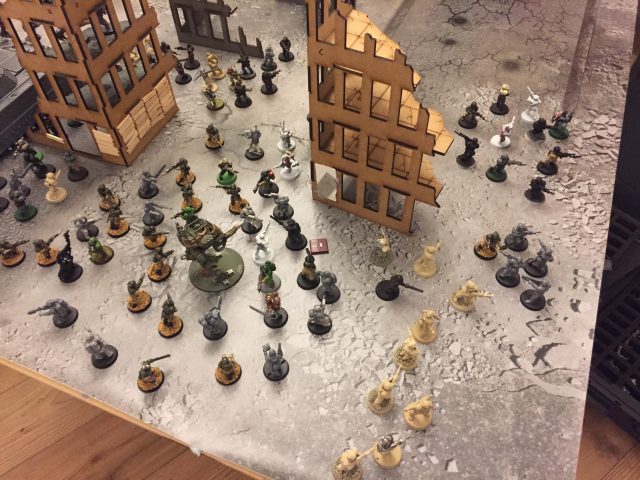 The plan was simple, stand and shoot Lasguns hundreds of times until everything died.

With my Pyskers and my formations plus Kurov’s Aquila what could go wrong – I had visions of getting Prescience on 50 man blobs then with Preferred Enemy for wounding I would be taking down scores of Marines and Custodians per turn. Even without Prescience and the relic the formation means that my Cadian Guardsmen re-roll ones to hit anyway.

I wanted Misfortune too, to cast on Marines to make all shots against the squad Rending. Getting sixes from 150 shots is easy – no more Marines. I also wanted the extra saves that some Pyschic powers gave. I forget their names but one gives a Cover Save, another gives Feel No Pain while another gives a unit an Invulnerable Save.

The Callidus was a Warlord killer and would not Infiltrate. But would skulk in my Deployment Zone waiting for the Drop Pods to arrive. At which point she would strike.

I had 3 blobs of 40 Cadian Guardsmen and then 3 units of just ten Guardsmen. The units of ten would sit upfront and take the brunt of shots from the Marines as they came in. This would stop lots of Flamers and Bolters doing 20 wounds to a 40 man Platoon and instead they would do 20 wounds to a ten man squad. Saving my men.

My blobs would pad out the Void Shield so that Drop Pods couldn’t land within its 12″ bubble. Making Flamers and Bolters useless until the shields were either down or they got within its bubble.

The Reality and Some Lessons

Even well executed Plans can fail

What happened was actually what I had planned, up to a point, but even when things were going as planned they were not going well. Everything seemed to be failing me; orders were not working, powers were not being cast, powers were too specific and useless, etc. All the elements were there for a lot of destruction and damage dealing but it was not happening. Perhaps it was the dice. Perhaps it was the list and that relying on Lasguns to be your main damage dealers was not a good idea.

Lasguns are not a mathematically sure thing

At one point it took 97 Lasgun shots to kill a Tactical Squad of ten Marines. Those Cadian Guardsmen had not attended training that day it seems. Math Hammer says that from 97 shots I should be doing just 7.335 wounds with Preferred Enemy or 9.431 if I had Prescience – so perhaps I was luck to kill all ten from 97 shots. This repeated itself with hundreds of shots being fired at the Custodians with zero wounds being taken or just one wound. Which is bad as Custodians have two wounds. So the effectiveness is essentially zero.

I moved the Shadowsword up in order to flatten a Dreadnought – which worked – it exploded. One ram from the Super Heavy and the Dreadnought just disappeared. The same happened in the next turn to a Drop Pod! Amazing! I had not used a Super Heavy in this manner before and it was great to see it work so well twice in a row.The main issue with the Shadowsword though was that its main weapon is Hull Mounted and faces forward. So once you move forward to start ramming units it was unable to shoot at anything. Its D Volcano Cannon did kill the Thunderfire Cannon and the Tech Marine in one shot. But after that its Volcano Cannon was a little useless as everything was either to the side of it or behind it once it moved out of my ranks to ram.

I did not fill the void that the Shadowsword left with men. So a Drop Pod arrived (containing the Command Squad, Vulkan He’stan and a Librarian) right in the middle of my forces and inside the Void Shield. I was a fool! The Cadian Guardsmen should have moved up behind the Super Heavy and filled the void it left in my ranks to stop Drop Pods.

The Void Shield was really effective until I let a Drop Pod into it. It stopped the Thunderfire Cannon from doing anything on turn one. That could’ve saved a fair few Guardsmen from an explosive death. It never collapsed completely though during the whole game. It also stopped Assault Marines using their Bolt Pistols before their charge as they were charing into the Void Shield. A small but significant benefit I feel.

Assassins are weak to focussed fire

The Stormtalon Gunship arrived and wiped out the Callidus in one round of shooting. We agreed that she can live and go on to fight the Command Squad to see how she did. But this was a good lesson. She did OK in the combat but hitting on threes in melee is really terrible and means that my 7 attacks are quickly reduced to 4 hits and then just 1 or 2 possible wounds. 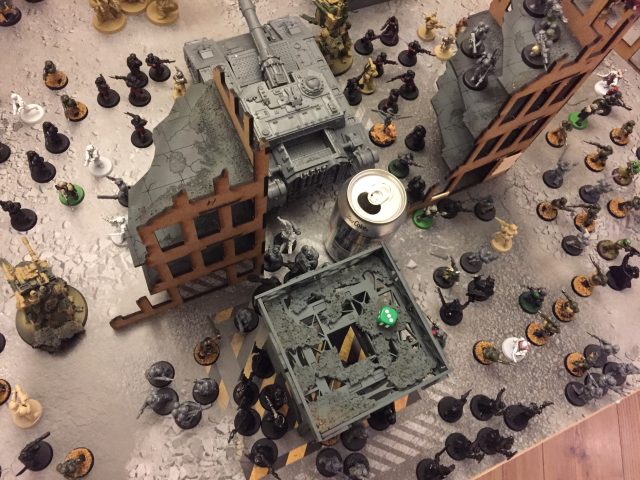 I decided from this game that I would not take the Cadian Battle Group against the Salamander Drop Pods. It was not effective enough and taking it on the train would have been awful. There are a lot of good things about this list but there are too many variables that need to come together to make it work and be very effective.

The Salamanders list also uses Minimal Small Units – to some extent – or it at least uses a lot of units. So having three big blobs of Lasguns is not that effective.  I am limiting myself to wiping a few squads at very best per turn. Which is no good really.

I lost the game, or would have lost the game had we got past turn 3. The turns take ages with so many smaller Salamander units and my big blobs.

Expect a battle debrief for the actual Salamanders game soon – along with my final list – I will post a link here once its written. Spoiler…. I don’t use 175 Cadian Guardsmen in the final game and my opponent doesn’t bring ANY Drop Pods!?