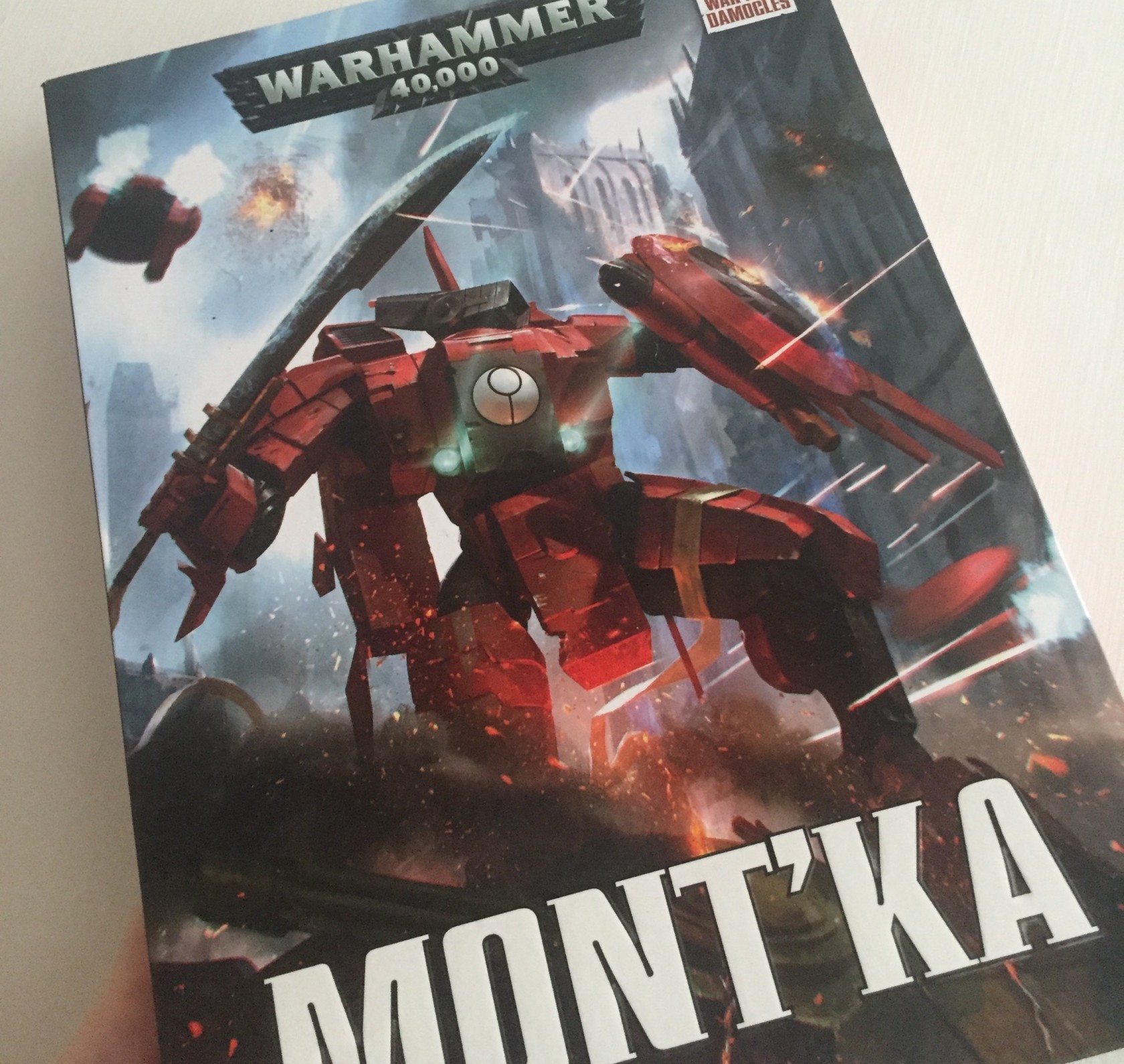 Astra Militarum formations and detachment have finally arrived! Yeah! My Mont’Ka book arrived last week and I was really stoked to finally get it after seeing all the leaks and peeks online. I am glad to say that it doens’t disappoint. This article will focus on the core of the Cadian Battle Group and the basic choices you need to take in order to field this new detachment.

This article is an overview of the basic requirements for the new Cadian Battle Group detachment, its going to be sparse on tactics and synergy with the available formations. But it will do the ground work for future articles about the Cadian Battle Group detachment and all it has to offer. Which is a lot, so excited to field some of these formations!

Included in the book in no particular order for the Astra Militarum is;

There are of course the eight missions for the War Zone Damocles campaign and Tau formations but I won’t be covering those right now. Especially the latter.

Mont’Ka is split into two hardback books. One contains the story, artwork and photography of models while the other is titled The Rules and contains all the important stuff.

This is my first time using formations and a new detachment so its exciting and might be wrought with errors. Although I have spent a lot of time reading and re-reading so hopefully we will be golden. But we can learn together.

All the above are based on the regular Astra Militarum codex and are not a formation in their own right. They have no special rules for a formation.

Its worth noting here that only named characters that are specifically mentioned in the detachment can be taken as part of the detachment. E.g. no Colonel “Iron Hand” Straken as he is Catachan born and bred. Not Cadian. But Pask and Creed are valid.

And thats the minimum requirement. While this doesn’t seem like much of a Command force it makes sense for the Guard. A single Company Commander leading the force, rather than some named character Hero Champion of the Imperium that wrecks face in assault. The Company Commander is there to lead and order. That is all.

There are two different Core choices; one is tank based and the other is heavily infantry based. What else did we expect?

The Infantry Company formation has a minimum requirement of;

This second Company Commander also gives you twoCompany Command Squads in total so far which is five Senior Officer orders with a 24″ range. More on this coming up. 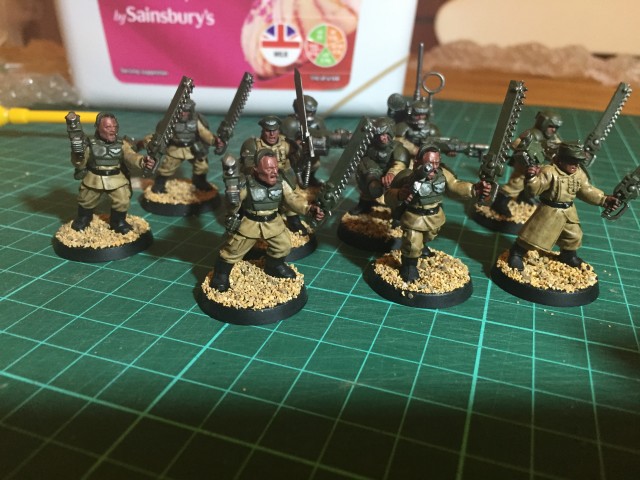 I must get painting!

The Infantry Company formation listed above contains three of these Infantry Platoons formations. Big thanks to @Oakenhawk for spotting an error on my original post, all fixed now;

And we need 3 of those to make up our Core Infantry Company element. So at the very least, including the Command element you’re looking at;

This comes in at a minimum of 1,005 points wth no characters and no weapon upgrades using the cheaper Scout Sentinel.

Wow, that is some commitment to Cadia! Even long standing Guard players that have better painting records than me might struggle to field that kind of Flashlight Force without buying and painting new models. Well played Games Workshop. As for me and my painting record – forget it!

But I digress, minimum model requirements aside this is an impressive force and with the detachment specific rules, more on this below, make me want to get my brush out right and start painting 85 Cadian models. 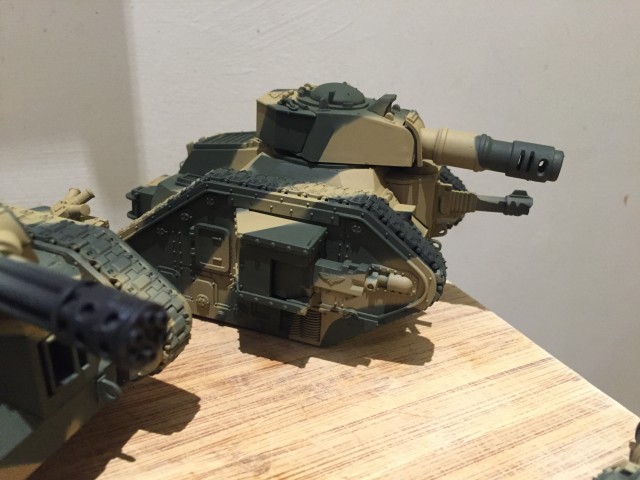 The other Core choice is focused on tanks and goes like this;

Using the cheapest variant, the Eradicator at 120 points a piece, the cheapest you can field this Core choice is 670 points. But who uses the Eradicator right? Plus when you see the detachment specific rules which favour infantry heavily then the Infantry Company might be the way to go to make the most of the detachment rules. Although by using this Armoured Company as a Core choice you unlock three Auxiliary choices which could contain infantry choices – as there is a Veteran based formation available which can take advantage of the order and Lasgun benefits coming up now.

Of course this and any other formation can be taken alone outside of the Cadian Battle Group too, so if you’re not wanting to benefit from the infantry centric detachment rules then this formation is still an attractive force as its own formation.

Three rules to whet your appetite for singed Xeno flesh.

Yes, you read that correctly. This is the last rule listed but is probably the most effective of them all plus its probably going to come into play most of all. From the 60 troopers you will average 35 hits, thats without Rapid Fire and without First Rank Fire Second Rank Fire. Thanks MathHammer for helping get that stat! The Lasgun in my time has done some incredible things with their volume of fire, but now it feels like they may finally be feared rather than ignored. Having them sometimes perform feats of glory is one thing, but for an enemy to be truly scared of them would be much more effective.

Battle Group Vox-Net – Roll an additional dice for Leadership tests for Orders  – discard the highest. So those orders won’t be failing often! If you’re taking Vox-Casters and you’re using this detachment then failing an order is going to be few and far between. This feels fairly fluffy and realistic. The Guard live by the book and discipline, to not do so is met with swift Bolt Pistol justice. So ensuring orders are completed correctly more often feels correct, orders can make such a difference in a game when used correctly. Making them more reliable is a welcome change.

High Command – The CCS that forms part of your Command choice can issue three orders rather than the normal two and orders can be given to units 24″ away rather than 12″. This is good and greatly increases the power of your orders. Too often I have to castle up and bunch up my squads to ensure that they are within the officer’s order range. But with 24″ this is going to be much less of an issue. (This was incorrectly posted previously, thanks to @TiberiusHecktor for pointing this one out).

The above just covered the additional detachment rules handed down by taking the basic Cadian Battle Group. The formations that make up that Battle Group also have their own orders.

The Punishing Fusillade  available to to the Company Commander in this formation is able to issue a single First Rank Fire Second Rank Fire order to any number of units from the Infantry Company at the same time. Bearing in mind that your base Infantry Platoon will have at least 60 models (54 with Lasguns) thats a lot of shots at 12″ rapid fire range. This is a single order too, so with one order you can put out a punishing 162 shots of Lasgun fire at 12″. This leaves his other orders free for other uses. Its worth noting that all the Infantry Squads must fire at the same target, so its unlikely to be 154 shots as its going to be very circumstantial to have all your infantry models within 12″ of the same target.

Coupled with the detachment rules of re-rolling 1s for Lasguns, a 24″ order range and generally more reliable orders this is fantastic and I can see many a Riptide falling to this.

Forward Recon gives infantry models in this formation Move Through Cover if they are within 9″ of a Sentinel from this formation. Sweet! Not sure how often I will use that as I don’t often push up my infantry but when the time comes then getting into a ruin is going to be that little bit easier.

Marching Drill allows the Platoon Commander to issue the Fire and Advance order. This is a new order! The ordered unit must make a shooting attack and counts as being stationery even if it has moved. Oh wow. This has me excited, finally Heavy Weapons might be worthwhile in regular infantry squads if we are able to move up and into cover with Move through Cover and then still get a full Ballistic Skill Lascannon shot off.

Battlefield Doctrines forces your opponent to roll two dice on the vehicle damage table and pick the lowest if the tank is within 6″ of an Enginseer from this formation. This will be handy as the Enginseer will likely be close by all the time anyway so its pretty much a given that this nice little rule will come into play frequently.

Steel Phalanx effects Tank Shocking and Ramming. If multiple vehicles from this formation Tank Shock the same unit for each tank after the first subtract one from the leadership test. Likewise for Ramming, for each tank after the first add one to their ram strength. I have never ever rammed anything and have only ever seen tank shock used once so I am not sure if this will be used. Especially if your Leman Russ are sitting on the back line merrily firing away.

Well I love it. Many won’t because, well, formations. Now we have formations for the Astra Militarum it feels great and feels like we are being slowly brought in live with the other new formations and detachments out there. The way Games Workshop has done this too feels good too, e.g not in a codex but in a campaign supplement. It would have been extremely annoying to have to shell out for a new codex less than two years after the less release. But with the Mont’Ka book we’ve got new missions, Tau content, a campaign and all the Guard goodness – one happy Cadian here.

The next article will cover a few of the most powerful formations and how they can work with the new Heirlooms of Cadia and the Cadian Battle Group detachment rules. There is a lot of content in this book and a lot to get your head around. If you haven’t got this book yet and you play Guard, you should go get it!

Cadian Camo Update with My Airbrush