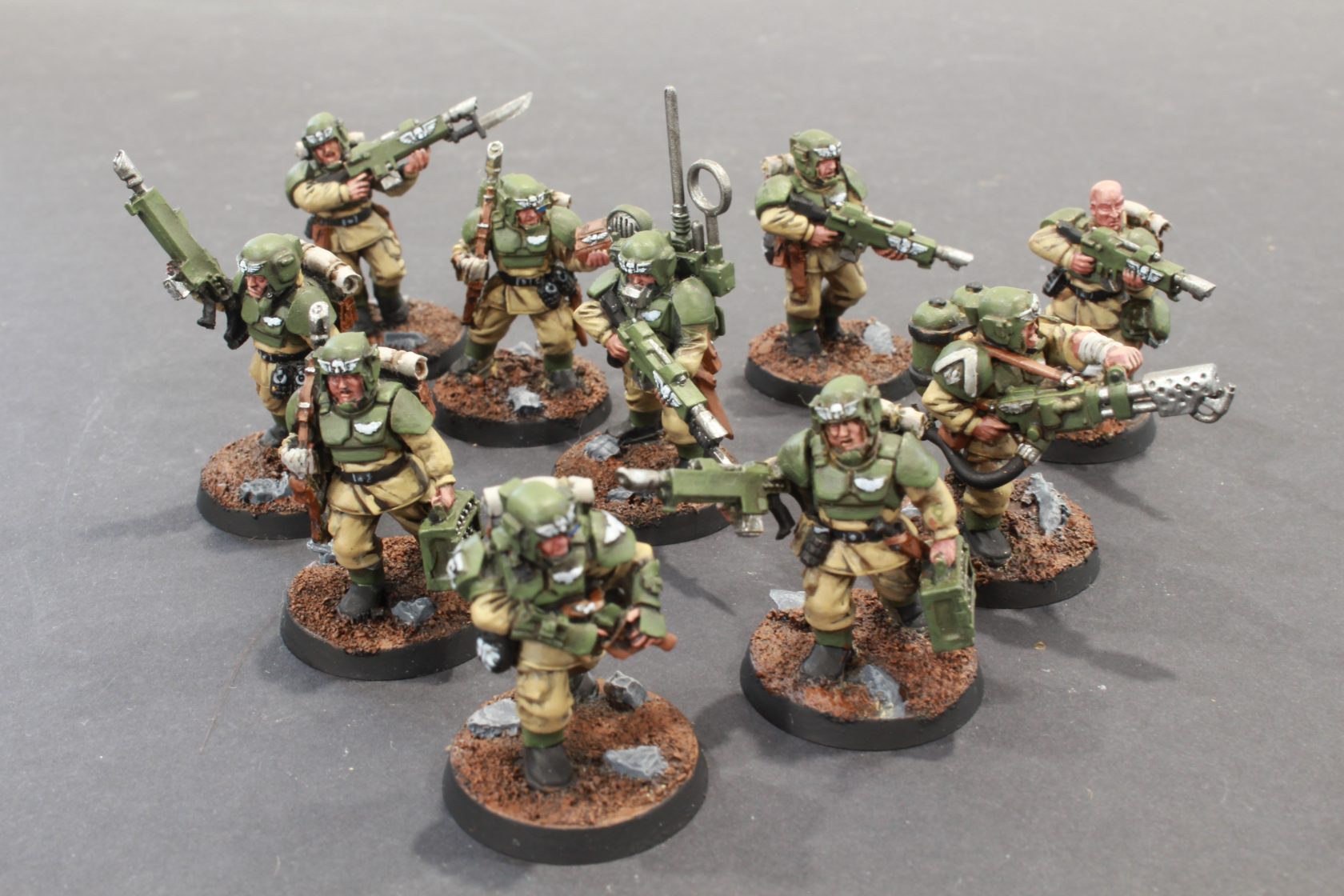 Another Army Showcase for you today from Cadian 8th From Instagram. This is a great looking force, so take a look, give him a follow and be inspired!

I started collecting Guard when the 4th edition Imperial Guard Codex was out. The Kasrkin models being the ones that drew me to the Guard. After many years of different Regiments and a few different Imperial armies, I’ve come full circle back to my original Cadian force. 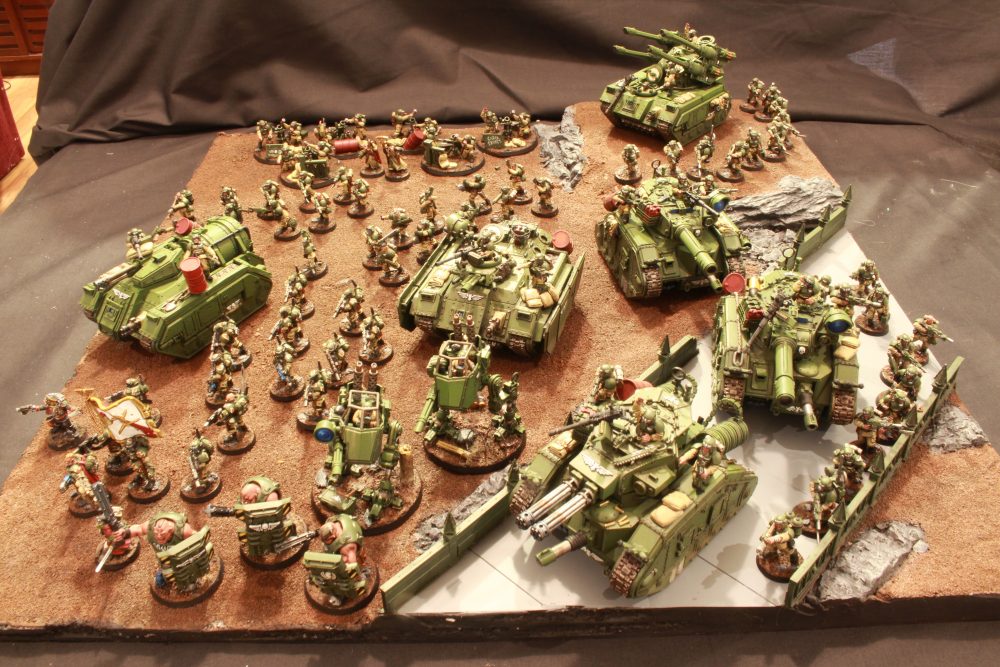 Taking my inspiration from the Eye of Terror book – what better force to build than those responsible for Abaddon failed 13 Black Crusades. After all, real men wear flak armour.

It’s taken many years to build this force. To slowly collect Forge World parts and get my painting and Modelling to a level with which I am happy with.

I chose to go with the classic Cadian 8th paint scheme but still always looking for a way to improve. I have plans to repaint all my armour as my airbrushing skills have improved.

Any good Company Commander will lead from the front. Since starting collecting I have been trying to find a suitable company Commander model. For the time being my force is lead by the Forge World commander with his Command Squad. 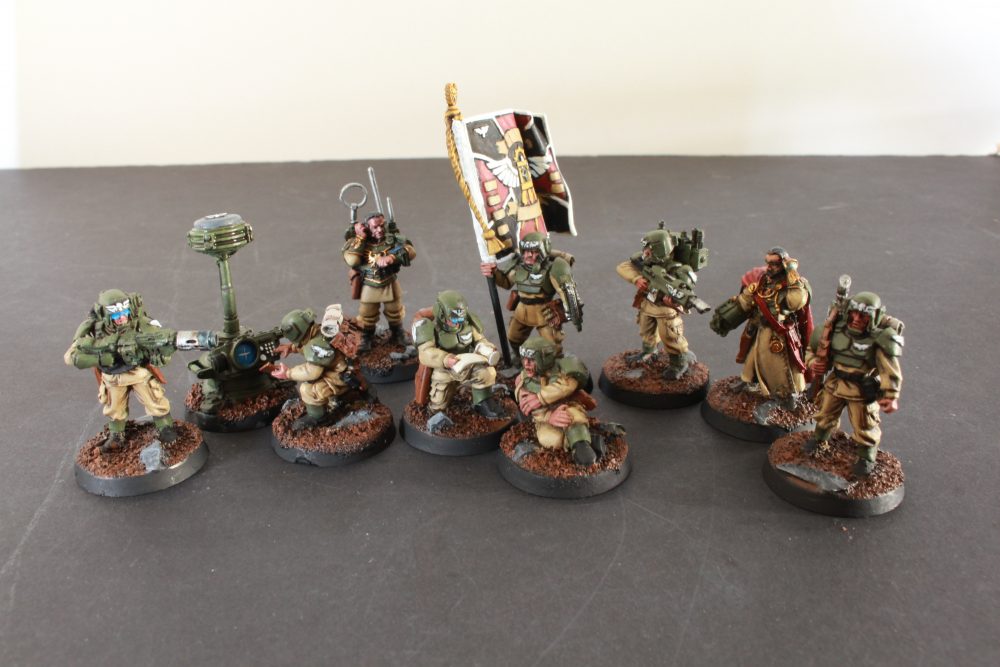 Acting as both a vanguard and mobile reserve the Veterans fit the role perfectly. Upgraded with the Forge World upgrade kits the shotguns and heads really bring a level of cool to the unit and enough Plasma to power a small city.

The Ogyrns and Bullgryns are the hard hitters of the army. Out of all the Ogyrn models, these Metal ones are my favourite, And no Ogyrn unit would be complete without Bullgyrns, I’ve just gone for a straight out of the box look for these guys, but more custom models are on the way. 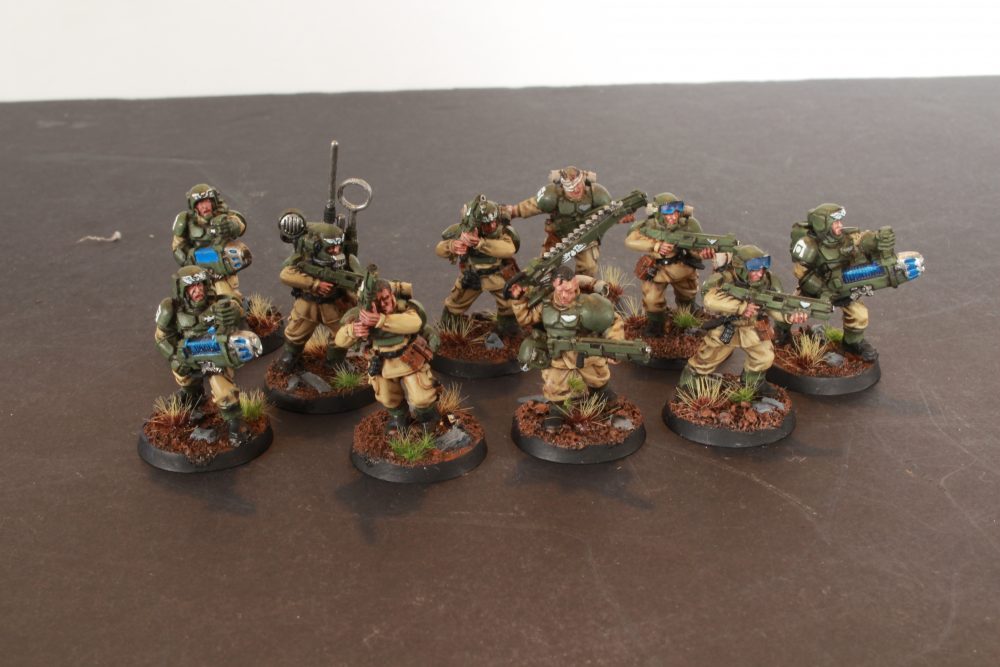 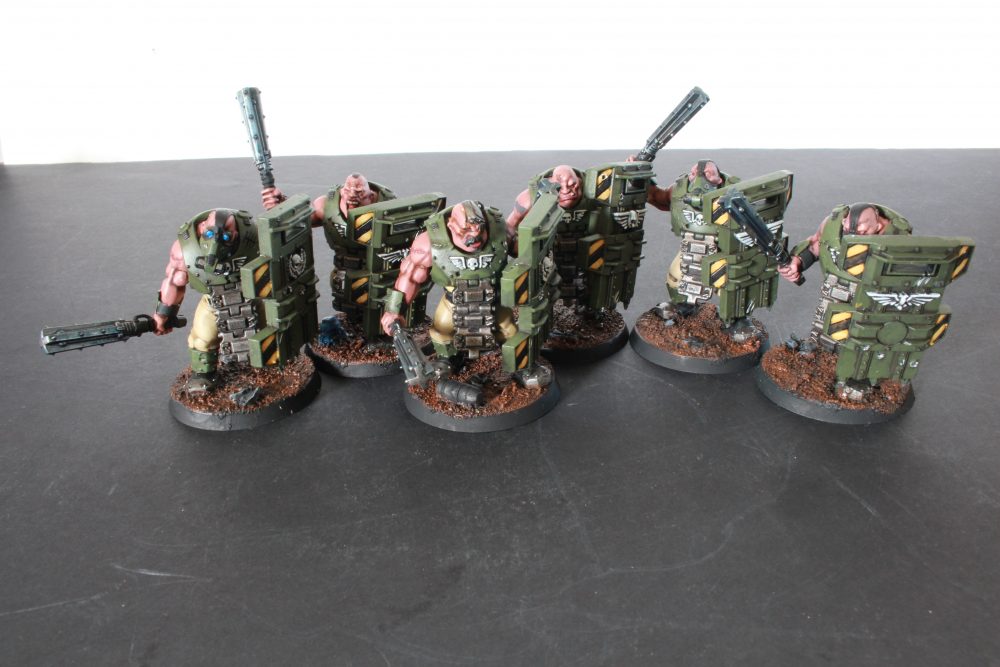 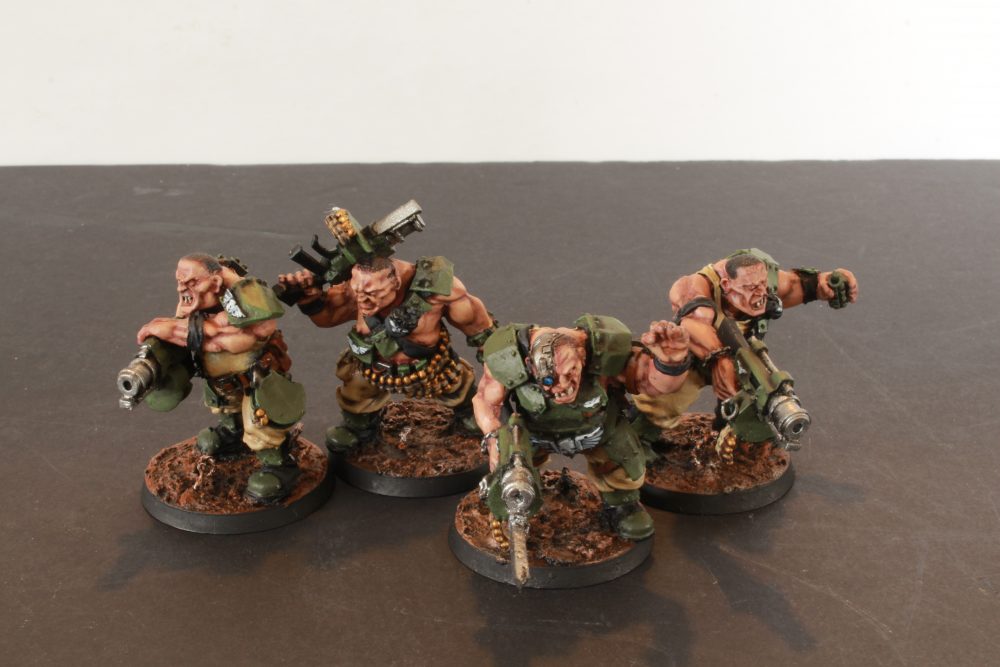 The backbone of any force is always the PBI (Poor Bloody Infantry). Using the ForgeWorld kits for the Cadians I was able to bring more detail to my troops. This will also help set them apart from the Whiteshields when I build them.

Trying to tell a story with my Heavy Weapons I’ve tried to build each one with a small diorama base. 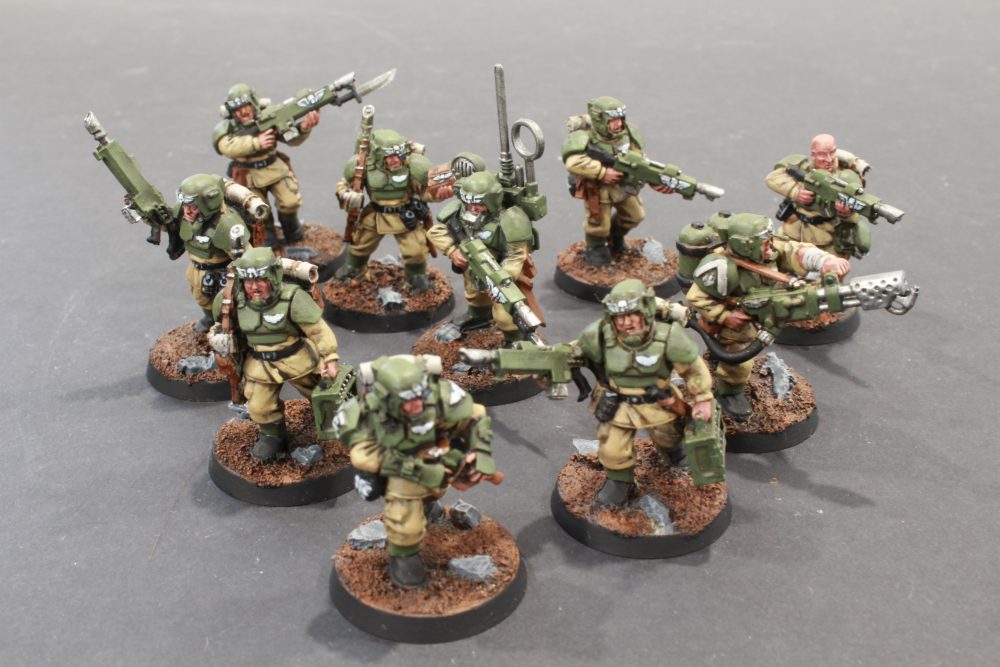 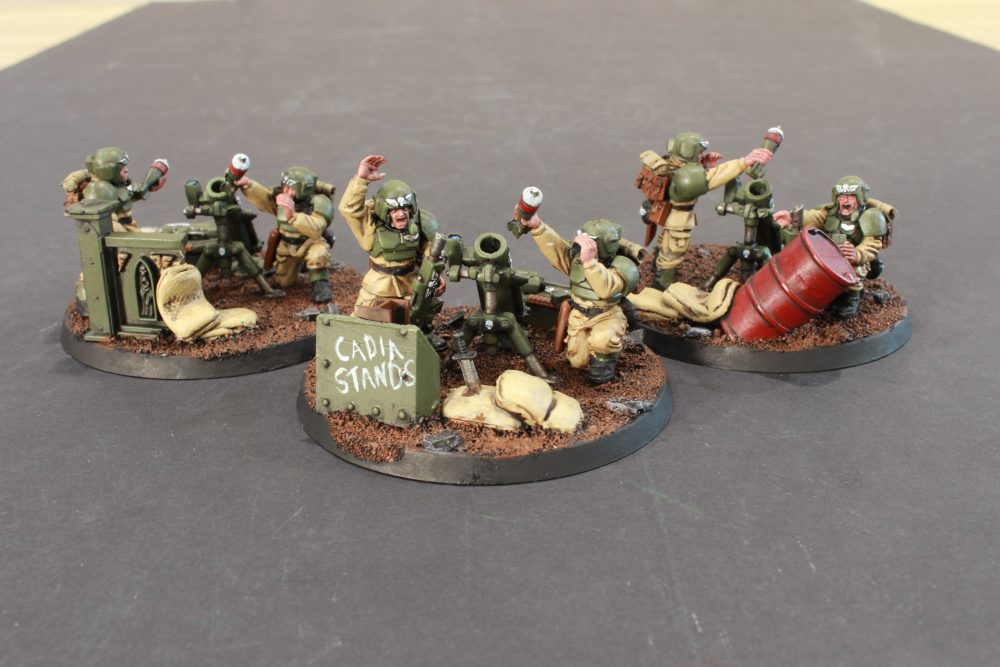 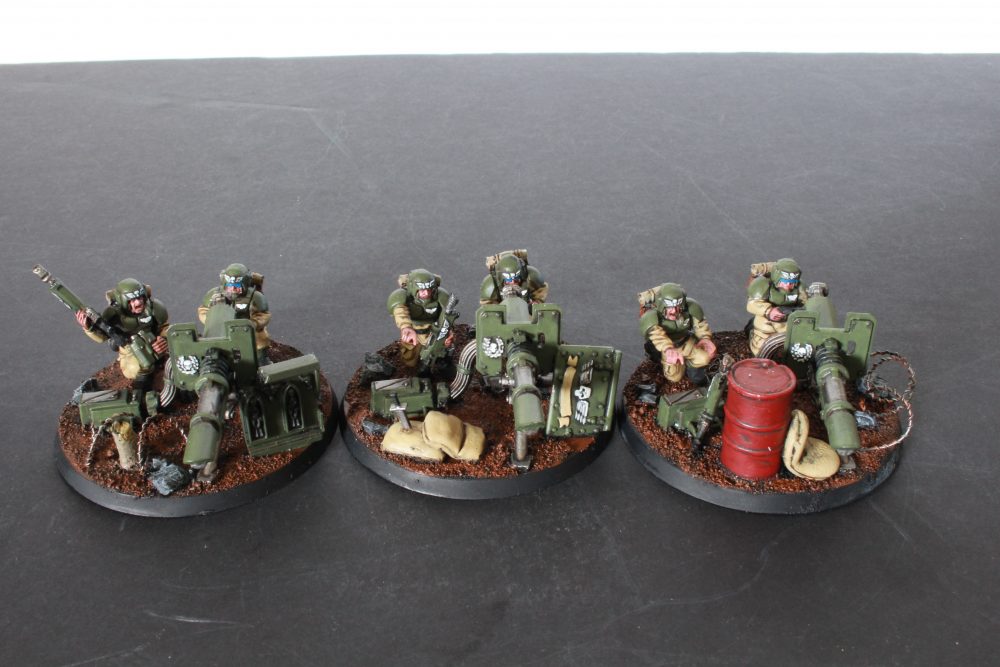 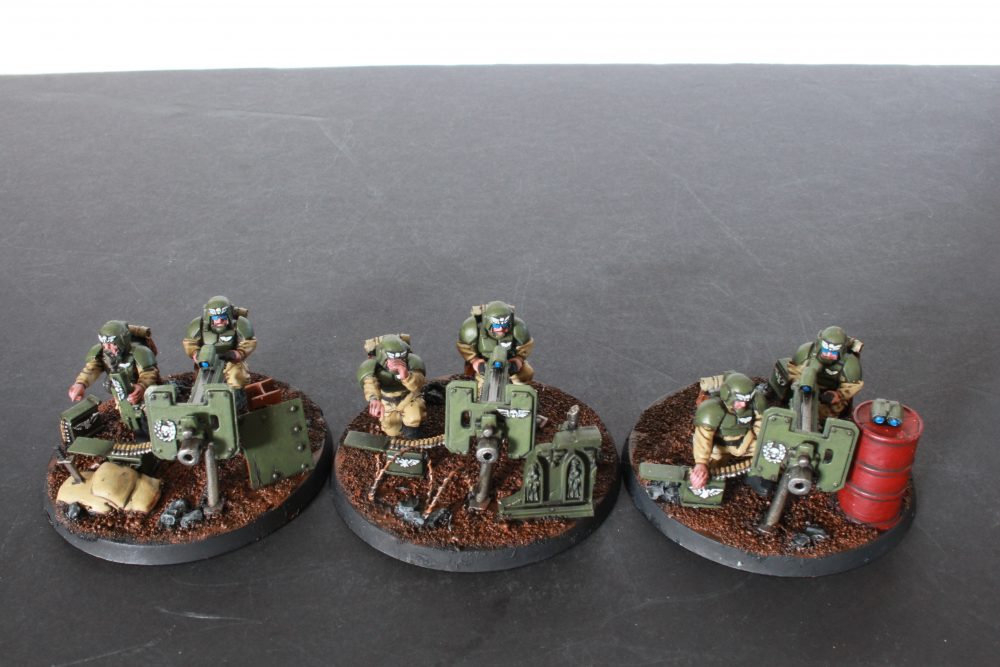 Scouting ahead of the main force, the Scout Sentinels are the eyes and ears of the army. With more Sentinels on the modelling bench, I will get more creative with the modelling. But for now, these guys are just following the uplifting prima. 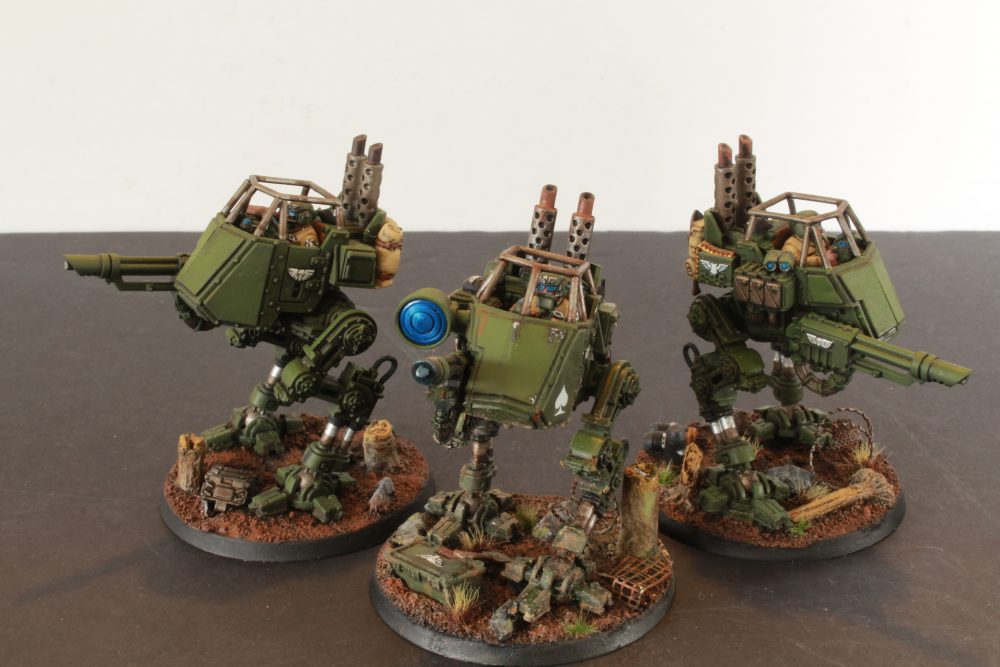 When I started this force I wanted each vehicle to have tank riders. As the rule changed from codex to codex this took many different forms. At one stage they were going to count as the flaming barrels.

The Tank Commanders tank is built using the Punisher cannons and ammo drums from the Vulture gunship. All the tanks are built using the Stygies turret as the base. This gives a more realistic look to them and gives more surface area for storage. I wanted my tanks to look like their crew lived out of them and to tell a story.

Anti-air support is provided by an old school Forge World Hydra. With the second one of these bad boys on the painting bench soon the skies of Cadia will be safe.

And no armour support would be complete without a Hellhound. But if they say the crew of Hellhounds are crazy, what does that say about those that chose to ride into battle on top of them! 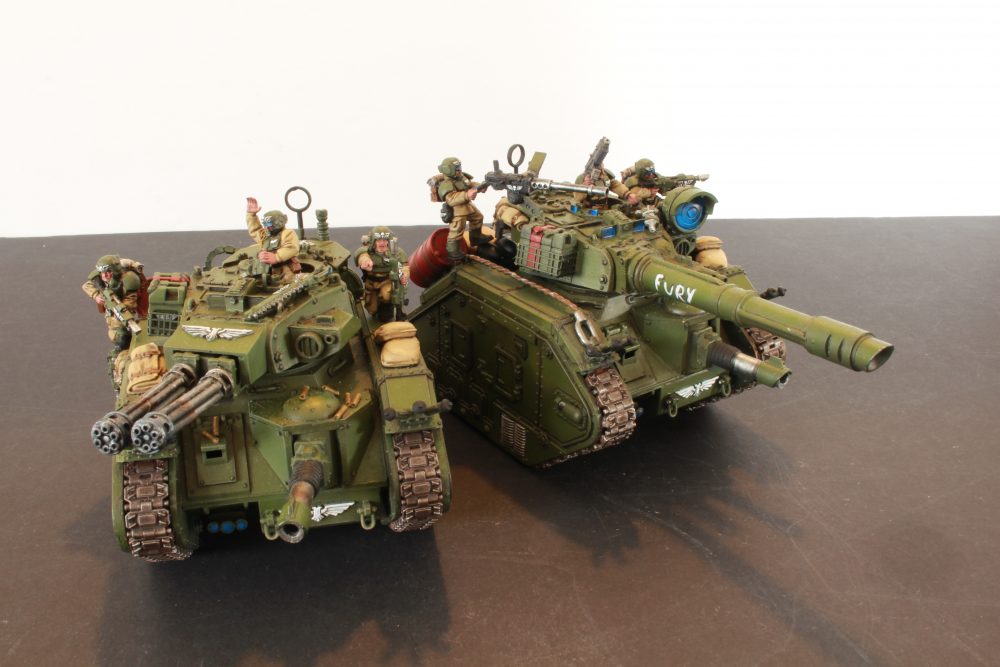 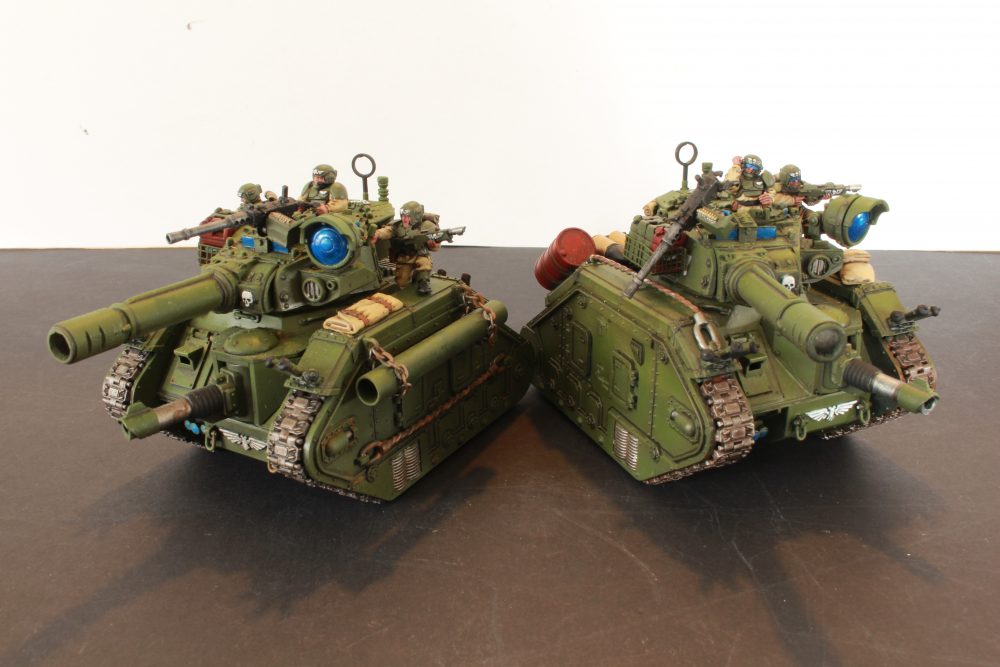 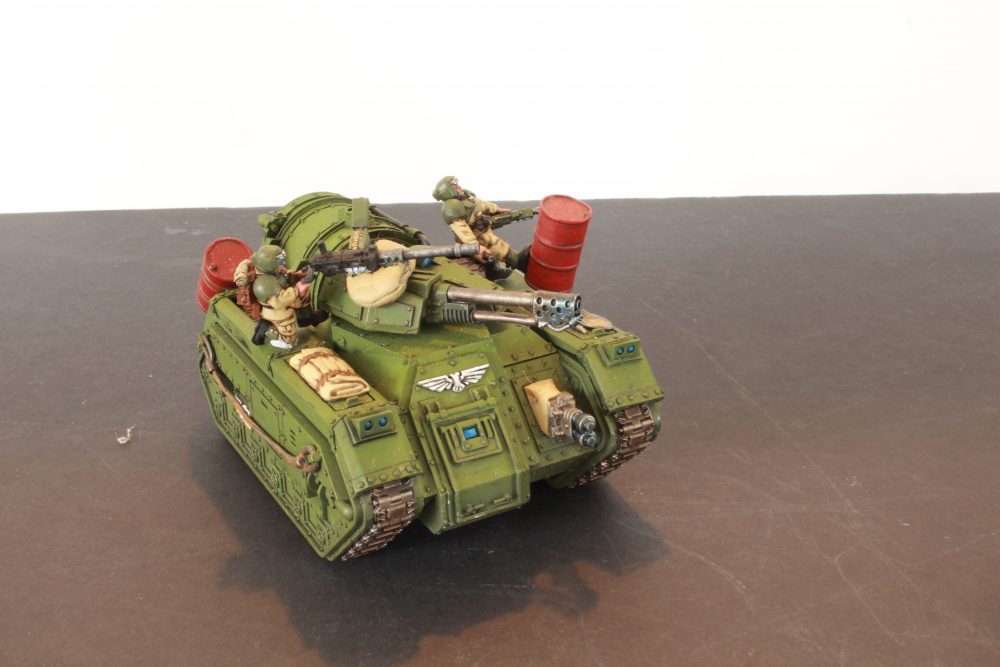 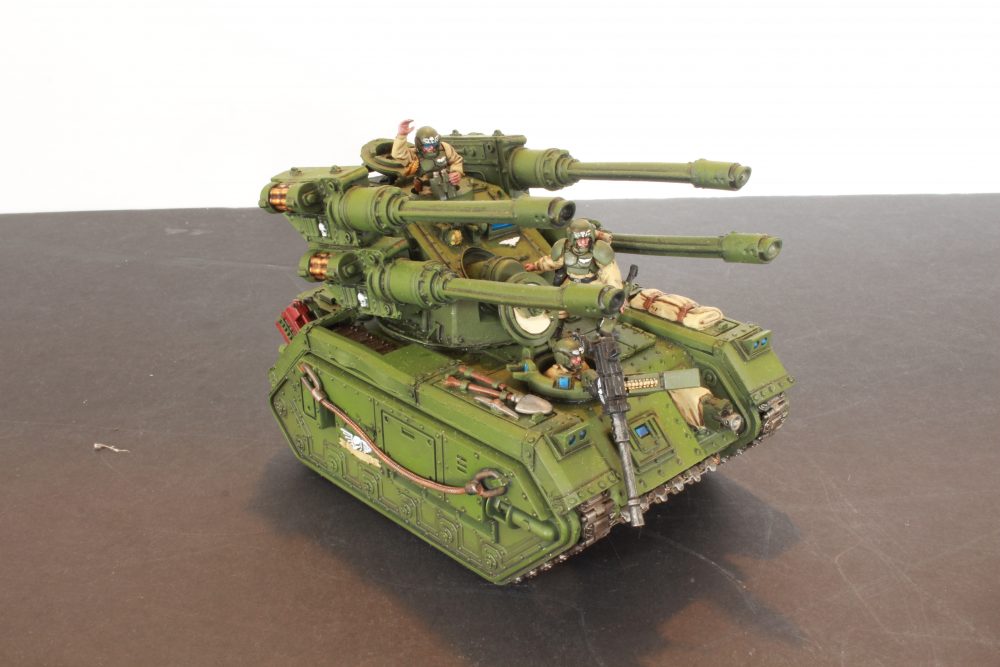 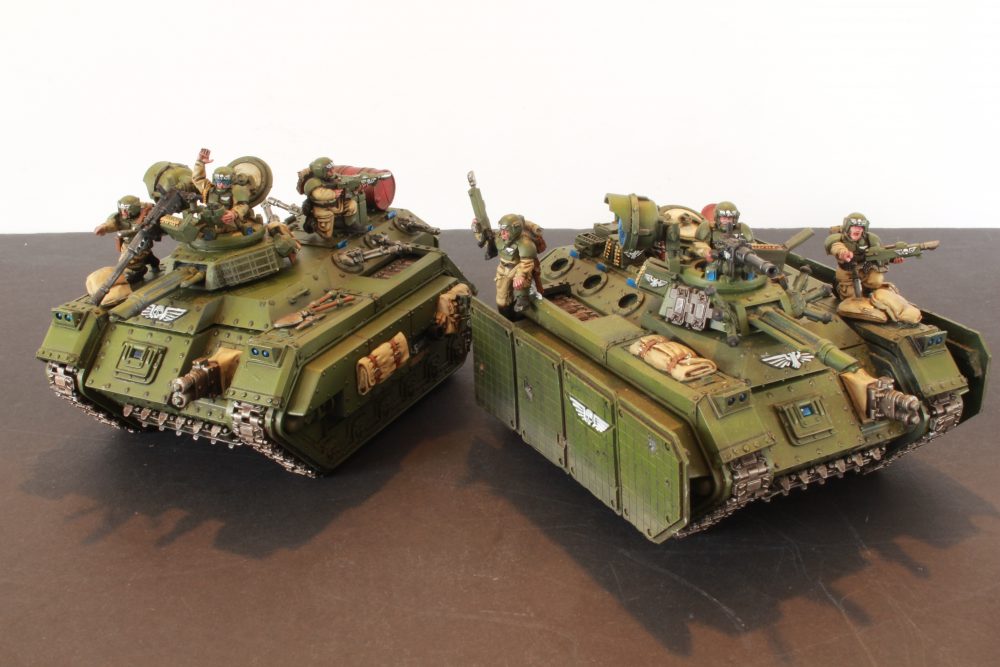 No force would be complete without these models. They are what got me started in 40K I started models some of these when you could give every model in your army Carapace armour. It’s taken many years to finish them but it’s been well worth it. Because everything a Space Marine can do, a Guardsman can do better. 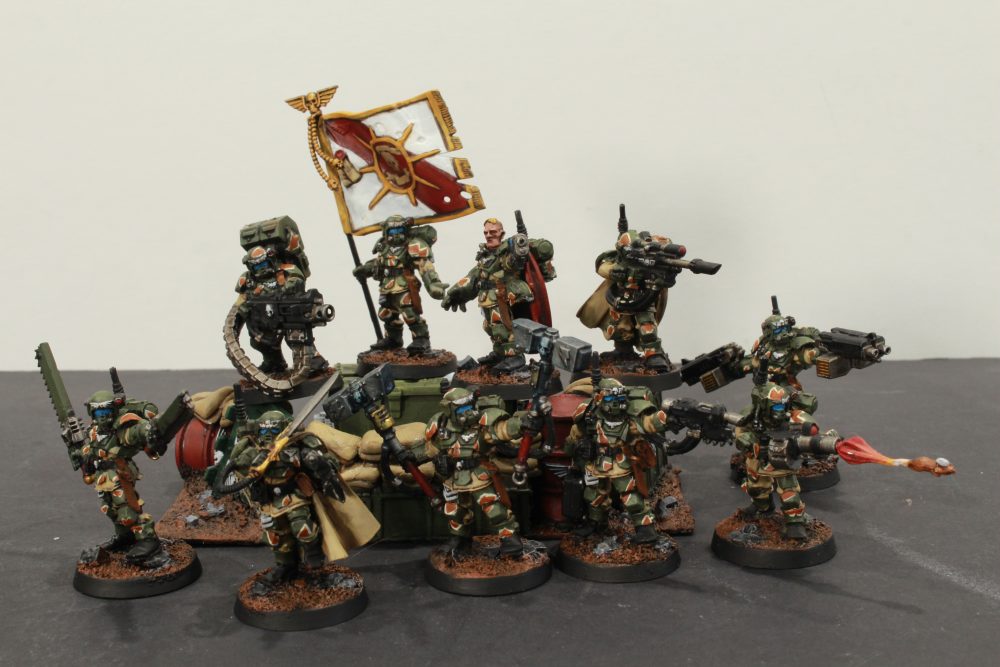 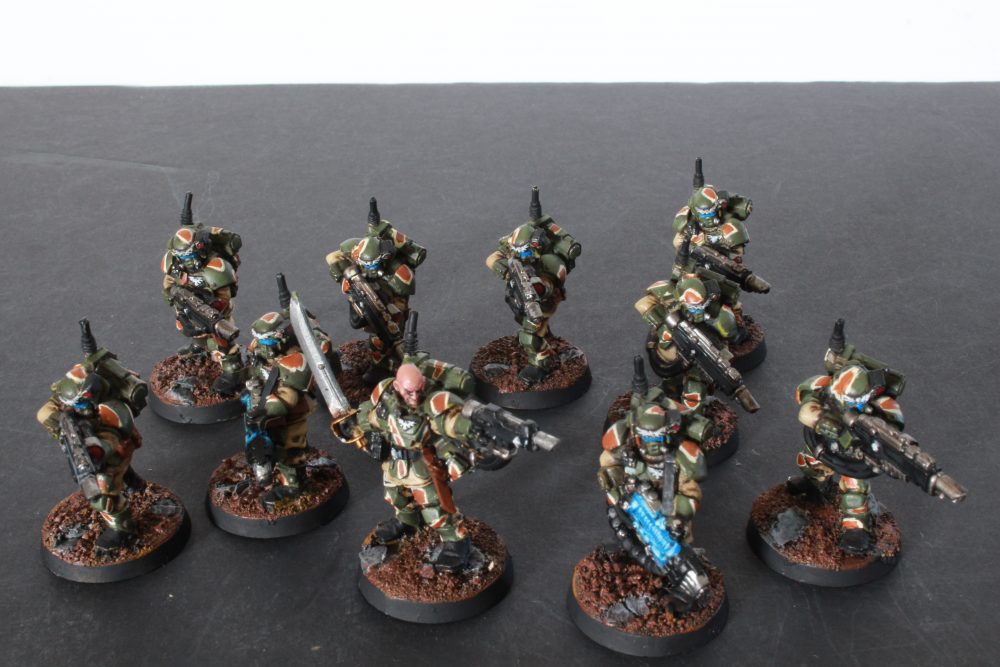 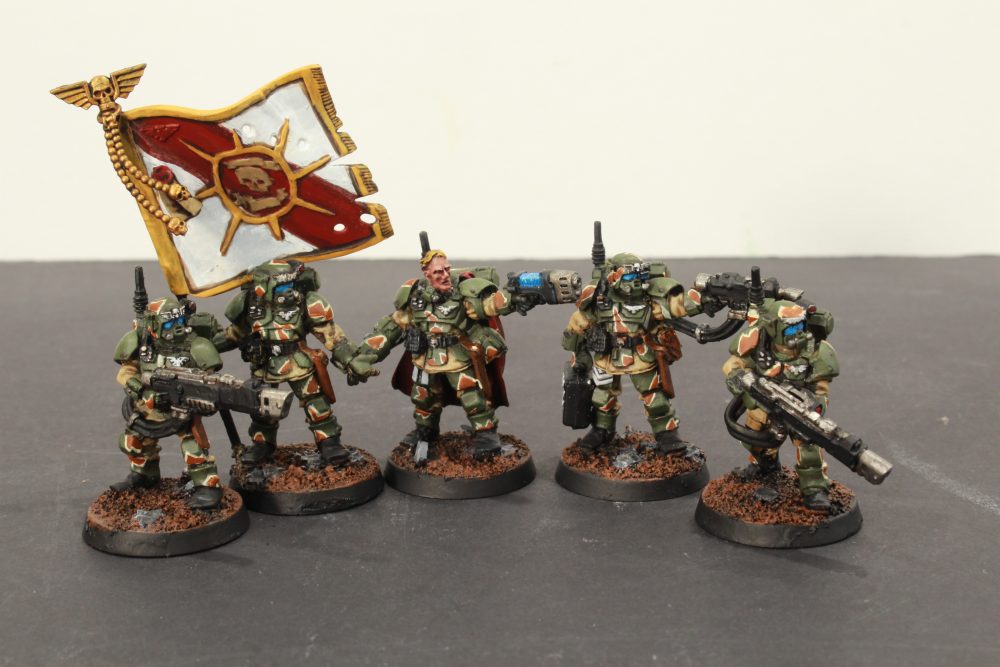 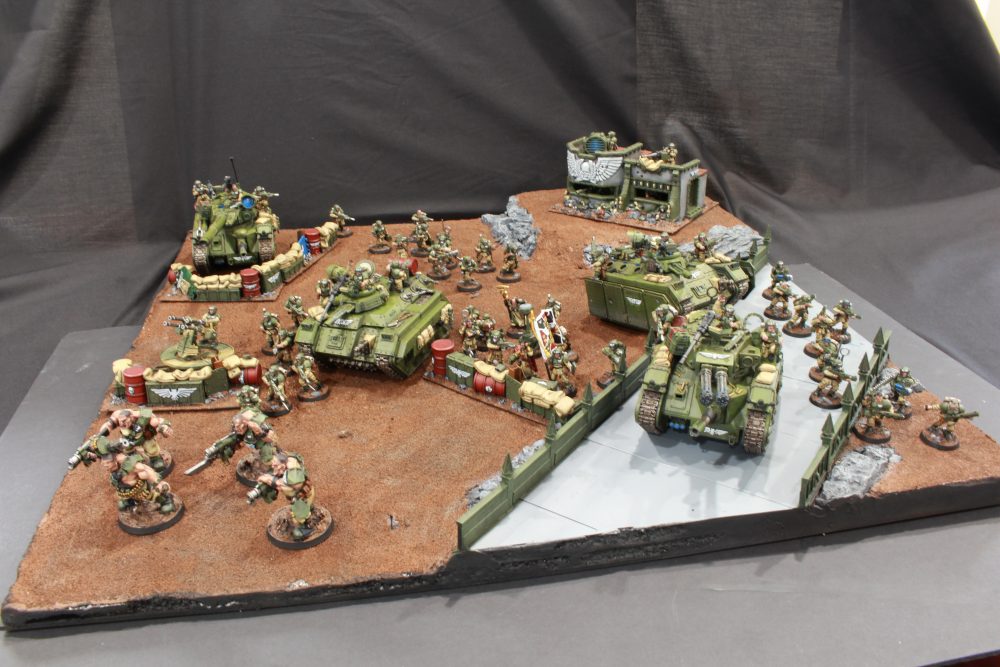