Thoughts about losing to the Blood Angels

Well the big game with my big 2,500 point Astra Militarum list is complete. And I lost. Time to sit back, moan and think about where it all went so wrong. I have lost so many times to the Blood Angels now, its getting a little disheartening! Once they get into the assault I am screwed it seems. But I am going to try and think about the issues and write them here before it all fades away and I learn nothing from the beating I took from the Blood Angels.

We played Eternal War: The Crusade, four objectives worth 3VP each plus First Blood, Slay the Warlord and Line Breaker.

I am going to rule out right away issues with the list because I spent ages and ages on it. And if there is an issue with the list then I have a really big problem with my games. And the Emperor is not willing to accept that response as a valid excuse. :-) 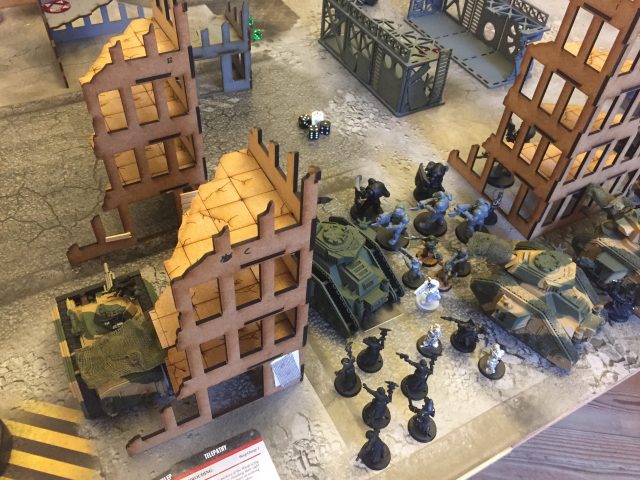 A quick overview of the main events that took place; 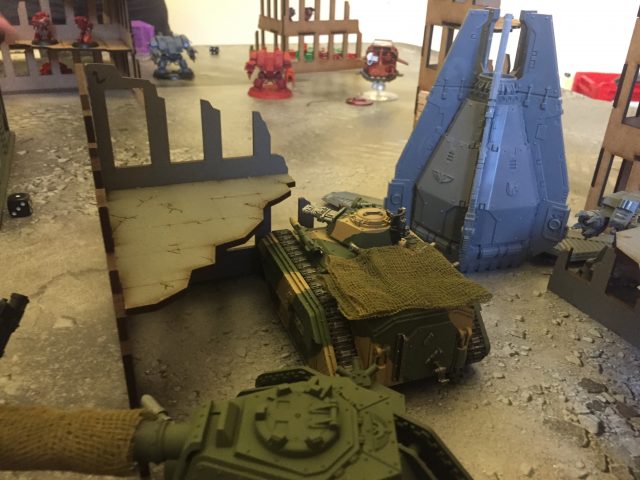 So we deployed along the long edges of a 6 x 4 ft board, you can read a bit about my board here. This gave us both just 12″ to deploy in which was OK for the sparse forces of the Blood Angels but for my Astra Militarum it was a struggle.

I considered placing some in reserve so I could deploy more effectively but that would reduce my fire power. However it would give me a handy counter to any Deep Strikers. Reserves would’ve been a good idea in hindsight.

I was trying to cover my Leman Russ with Bullgryns  for the extra cover save so everything was packed in tight. I also needed to keep my Tank Commander close by along with the Enginseers. Plus my Psykana Division was packed in tight too. Again, in hindsight, deploying in my two different corners may have been a good idea. It would split up my forces so assaulting Blood Angels couldn’t roll through everything with ease.

So this was major mistake, a massive stupid mistake on my part which I am still kicking myself about. I failed to join my Primaris Pysker to a Wyrdvane squad or any other squad after deployment. He was one shot killed by a Krak missile in turn two after manifesting nearly nothing. It lost me three Divination powers; Prescience, Foreboding and Misfortune. These were the three powers I really wanted for the game and luckily rolled at the start. Then they were gone in turn two.

This was a massive blow from a silly mistake which made 300+ points of my force virtually worthless. The Wyrdvanes never really did any real damage (or blessings) for the rest of the game despite harnessing on a 2+. I got the odd power here and there but nothing noteworthy. 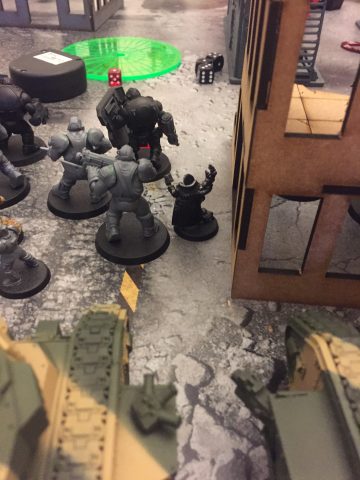 The hole where my Primaris once stood

I took the Ogryn Auxilla formation as detailed previously, it worked well although the actual formation benefits didn’t come into effect as much as I had hoped. The Fearless is handy and splitting my deployment (as mentioned above) would have caused me some problems with this formation as the Fearless from the Commissar is only effective over 12″. And the S7 Hammer of Wrath attacks never came into play.

But having all those ‘gryns was handy for simply soaking up fire that would have eaten my Veterans, Wyrdvanes and Company Command Squad. The formation has 36 wounds from the ‘gryns and 39 in total if you include the Commissar. They even took some Lascannon shots on the chin too – as the Lascannon carrying Marines got bored of having their rounds bounce off the Leman Russ front armour. 600 points for 39 wounds with a 4+ armour save – is that good value? 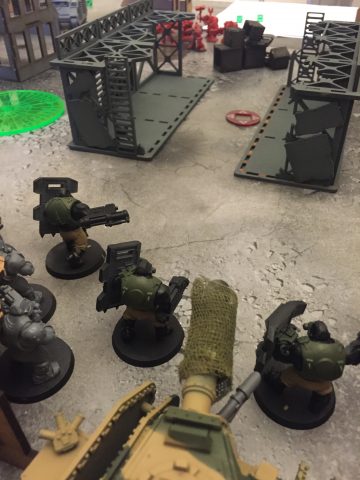 Bullgryns hold the line, the Terminators without their Land Raider can be seen in the distance

I failed so much with movement by practically not moving for the first two or possibly three turns. I was afraid of exposing the rear or side armour of the Leman Russ by moving forward. Both of my Chimeras died where they were deployed too, which meant my Veterans were stuck in my own deployment zone with no chance of crossing the board later in the game without being completely destroyed in the process.

In fact I don’t even think any of my models ventured more than perhaps 18″ from my own table edge as I was hell bent on ensuring the Enginseers were close by to force to two rolls on the Vehicle Damage table (picking to lowest). And so they could repair my Leman Russ. Perhaps the formations and their benefits were my downfall?

When will I learn that castling up is not the answer! 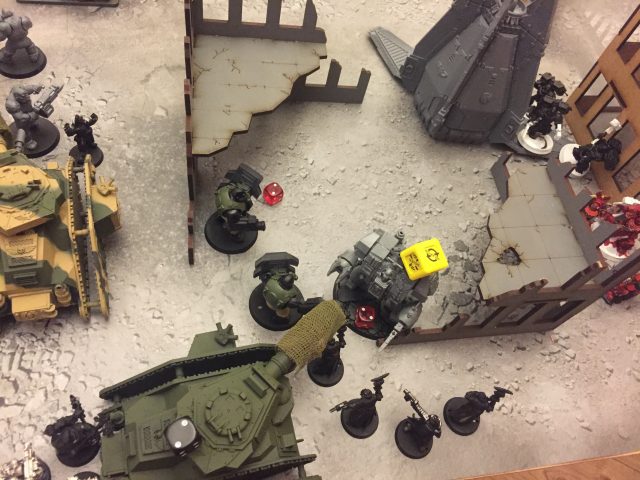 The Blood Angels assault the Guard on their right flank

Finally the Blood Angels pressed their advantages really well. Deep Striking a Dreadnought, Dante with Sanguinary Guard, five Terminators and a five man Death Company Squad right into my deployment zone. Plus they only scattered 1D6″ because of a Dante’s Warlord Trait I believe? So they were all super accurate.

My Battle Cannon Leman Russ were no good here because it was Danger Really Close and any scatter would have killed my own guys for sure. In fact the Battle Cannons did very little all game, I think they killed just two Terminators that came from the Land Raider on turn one. Other than that they were useless. Perhaps Punisher Russ next time? With Pask? 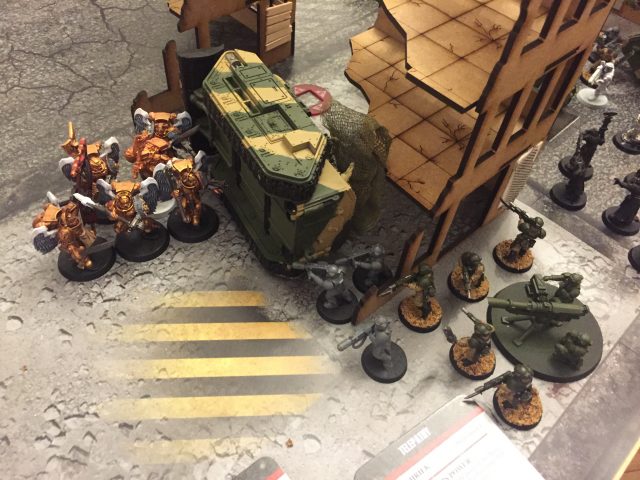 Dante arrives while Veterans cower behind their wrecked Chimera