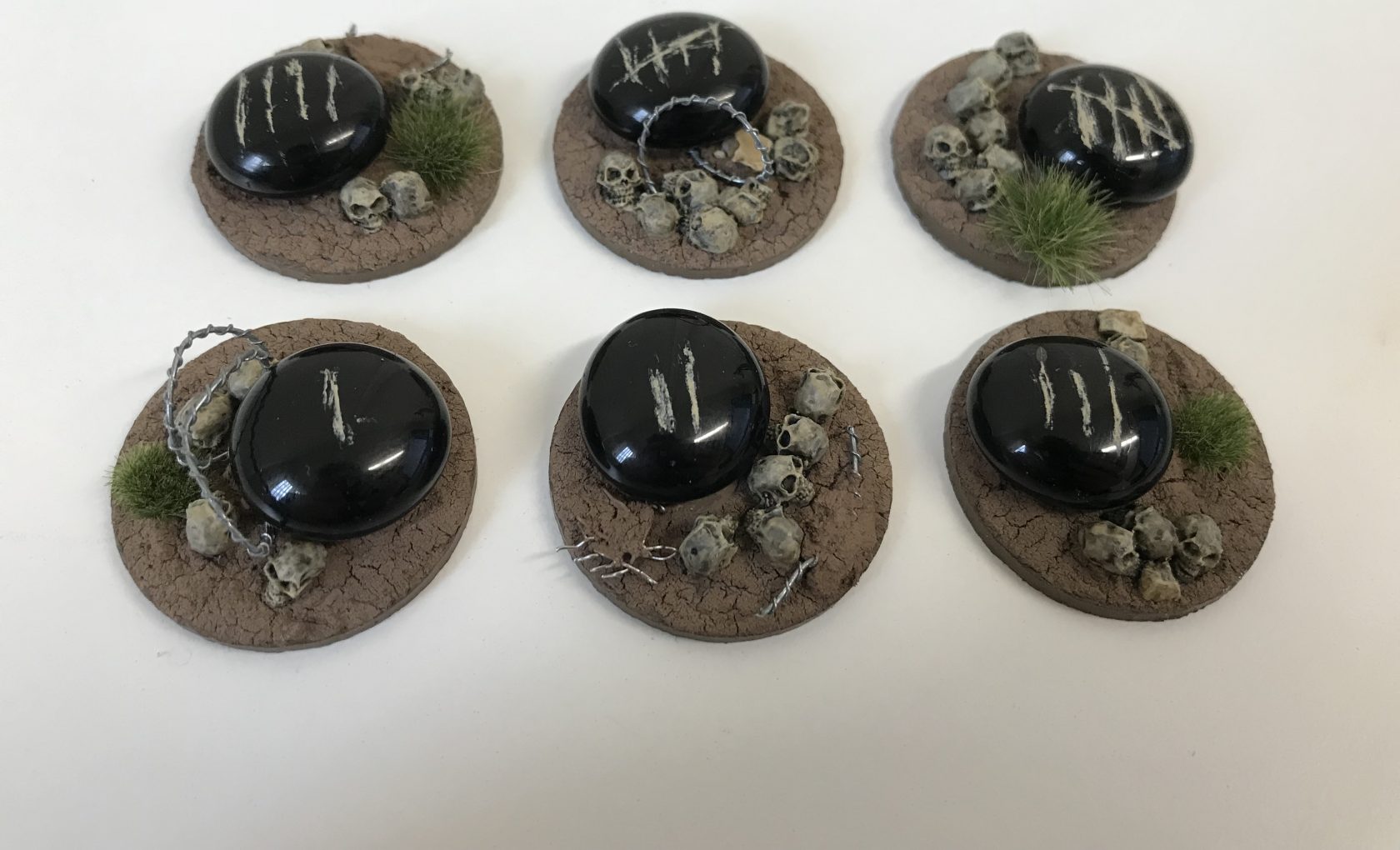 Blackstone Objectives - something worth fighting over. So we are told.

I have a little hobby today for you. In the form of Objectives. With all this talk of Blackstone, I thought it would be a good idea to make some fitting Blackstone Objectives. The idea was simple, get some bases, get some cheap craft style gems and glue them together.

The bases I got from eBay. They are 32mm Resin Skull Bases and £3.50 for 10 (including postage) seemed like a good deal. I gave them a good wash in soapy water and based them in Steel Legion Drab. 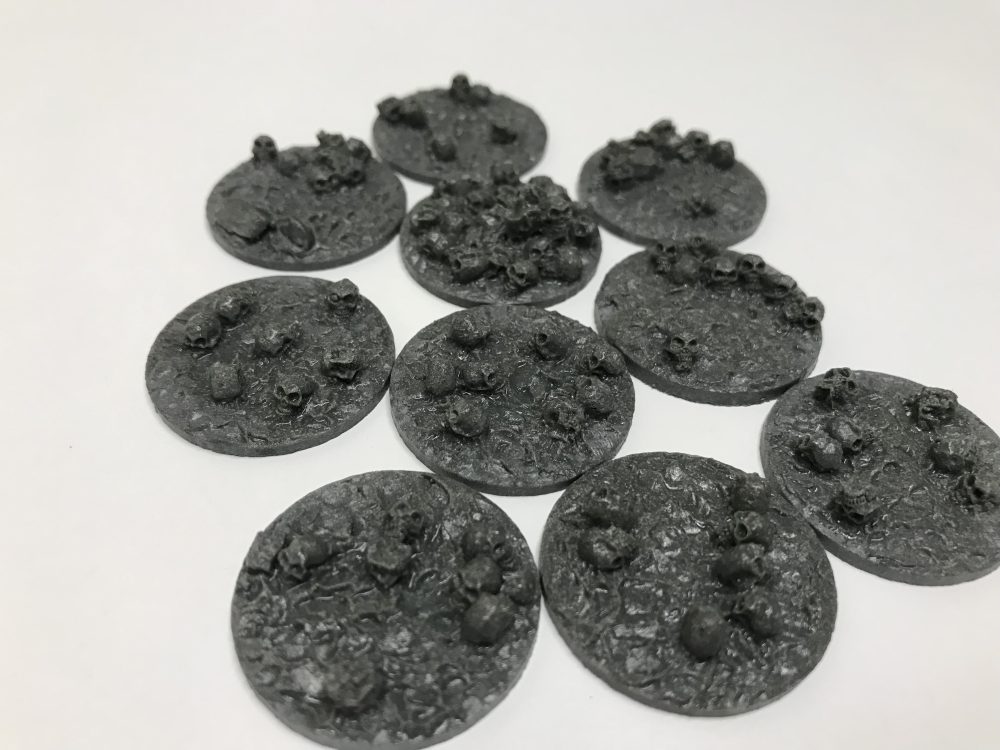 At this point, I did not know which bases I was going to use. I have 10 bases and 10 stones but only needed 6. 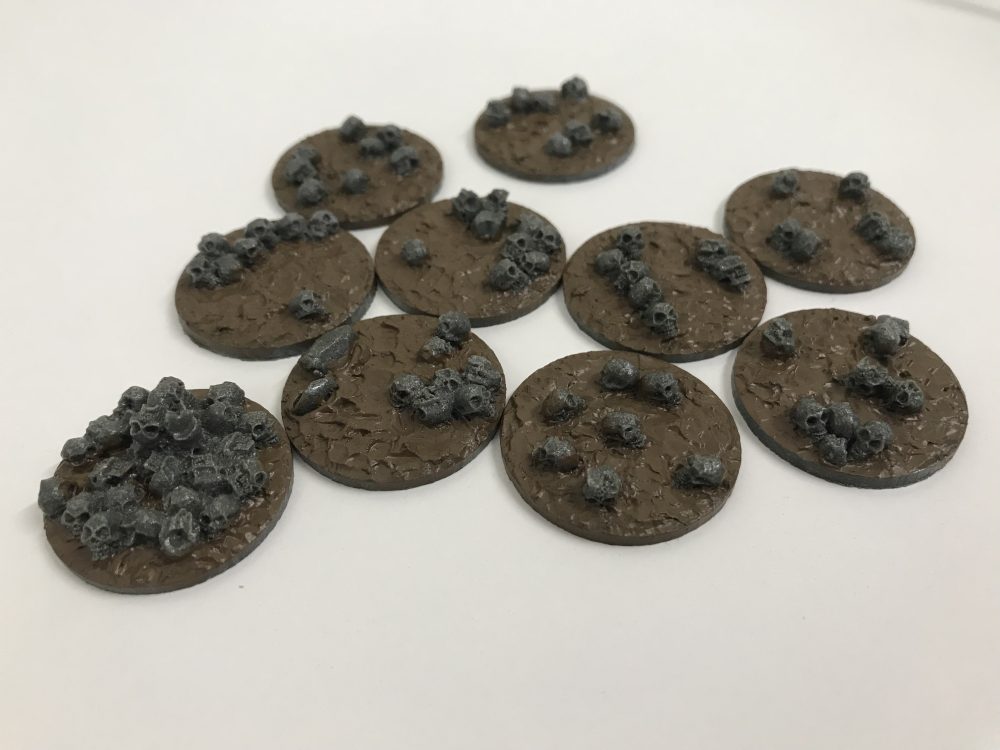 The Skulls I did in Ushabti Bone and then Nuln Oil. Then another light layer of Ushabti Bone once the Nuln Oil had dried. I also placed Green Stuff on the bases and squashed it down with a stone. This was to give them something to stick to. I did not think they would stick well the to rough surface of the base. So far, so good. They are still on their bases and holding well. So this was a good call! 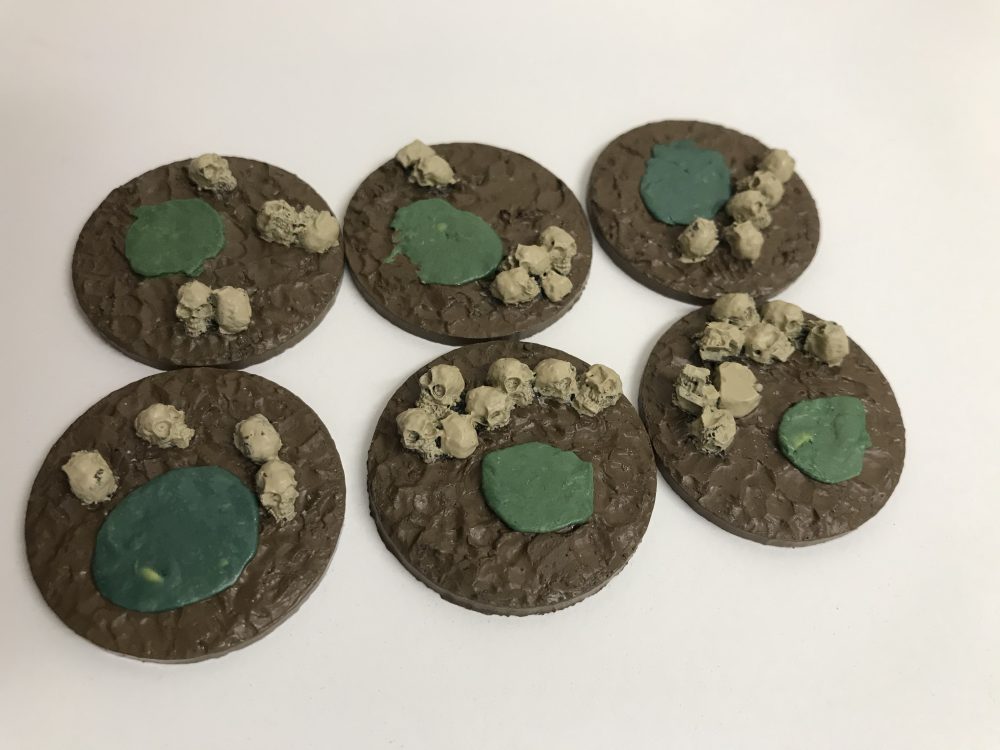 It is probably not clear but I clipped some of the skulls off the bases to ensure the stones would fit. If there was not enough room then usually clipping a skull was enough to open up enough room to then fit on a Blackstone. The very densely populated bases I did not use – for this project. 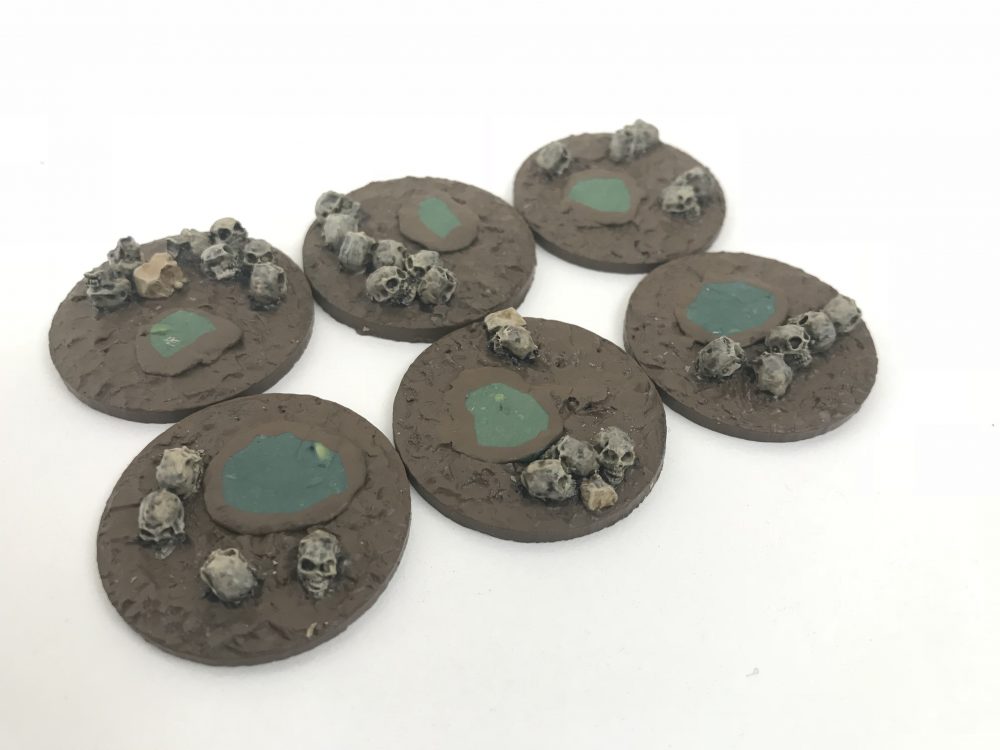 Finally, I added Agrellan Badland to the base. This was a mistake! I meant to use Agrellan Earth because that is what my Guardsmen are all based in. But it still works and looks good. So meh! 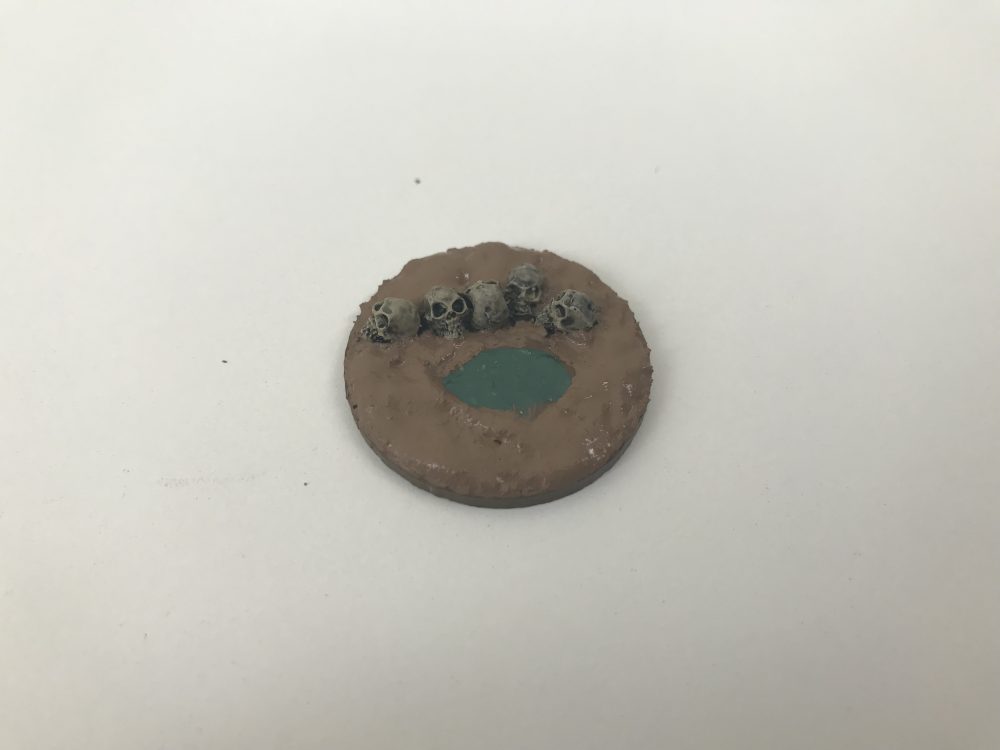 Agrellan Earth is lighter and gives more of a crack desert look, rather than cracked mud look. 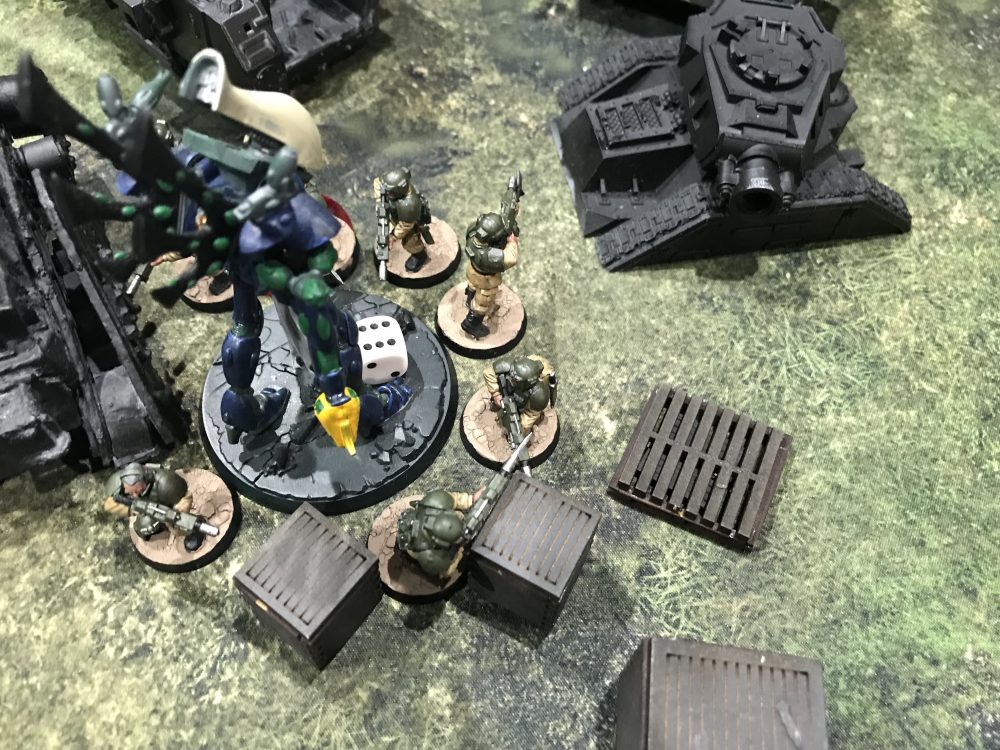 The stones are Glass Pebbles also from eBay, £2 for 10 including postage. I looked around for a while to find something more jagged and as cheap – but failed. A jagged stone would possibly look better – maybe just head to your garden? Or the park? 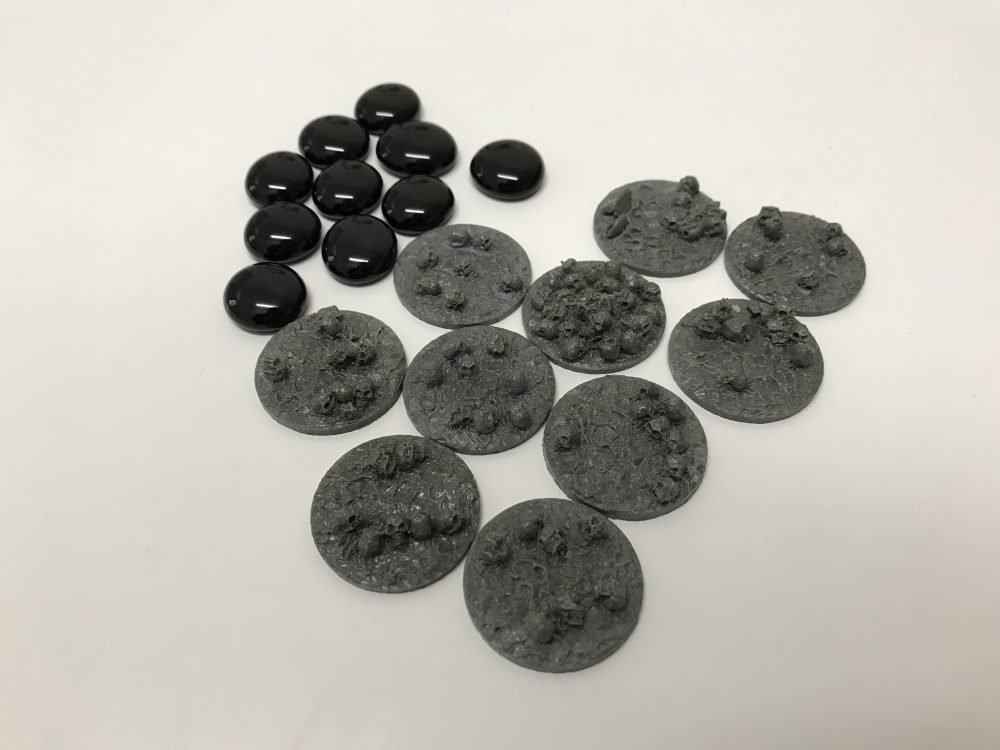 No prep here, just the Green Stuff to glue them on to. I added them to the base while the texture was still drying, just so it stuck to it a little bit. This was perhaps a mistake because I was not sure how I was going to denote the objective numbers. I ended up using a file and scratching them on. This would have been a lot easier and safer if I had done it before glueing the stones onto the bases. 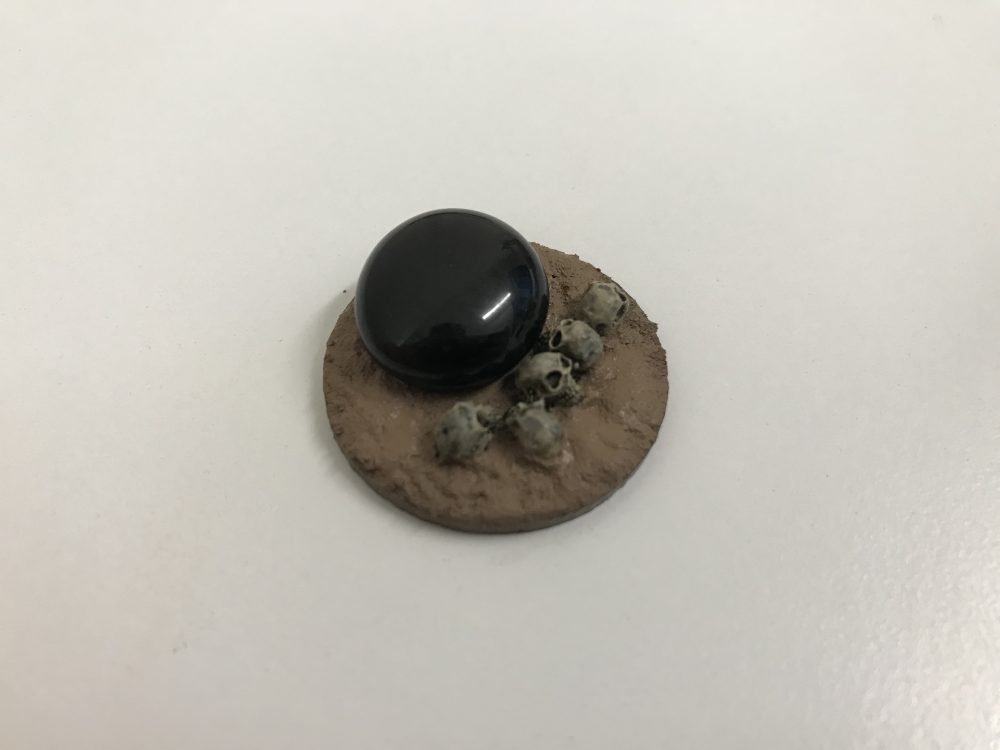 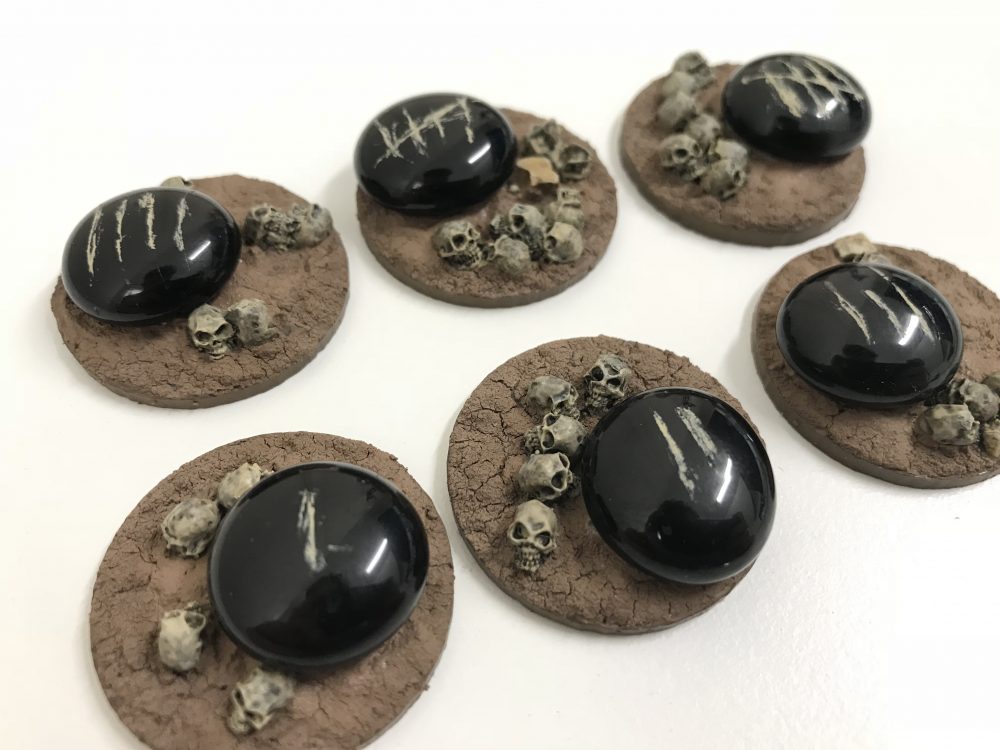 All is now in place – Blackstone Objectives

Basing and Other Details

I think added some barbed wire to the bases and some grass tufts. The objective numbers I scratched on with a file and then painted with Ushabti Bone. The excess painted was wiped off to just leave it in all the scratches. While crude, its worked well. 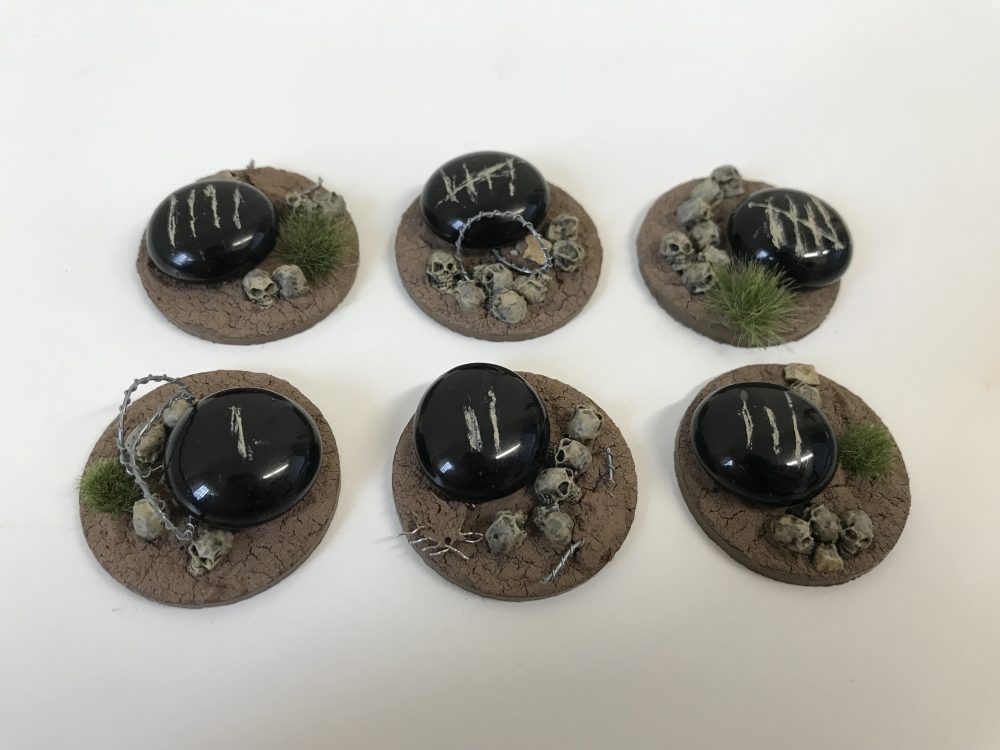 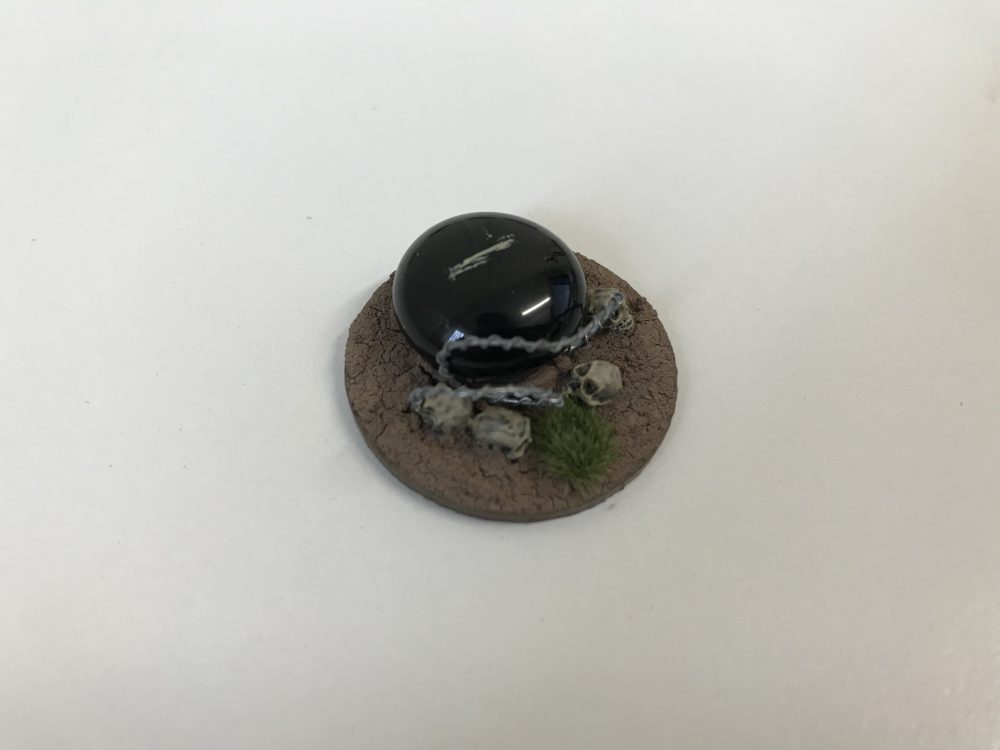 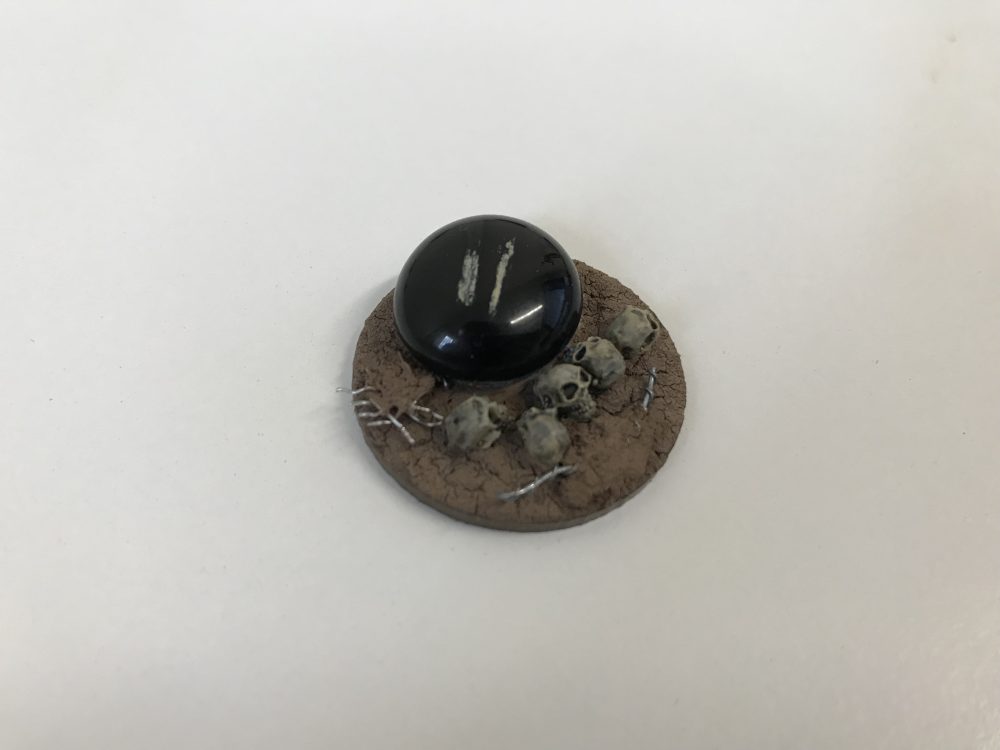 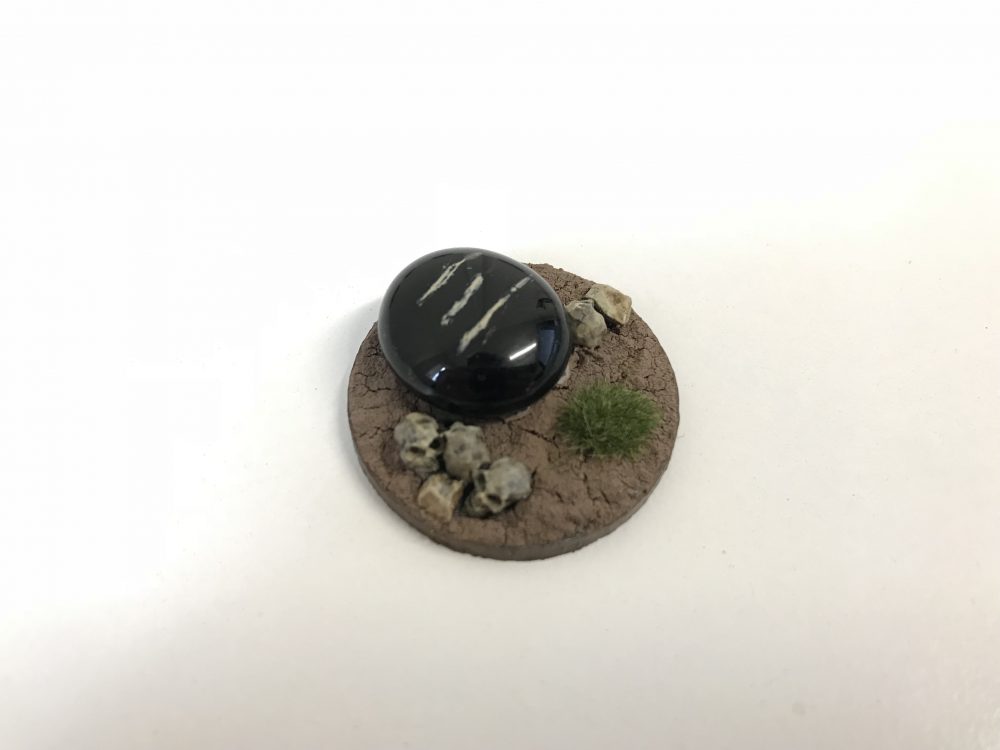 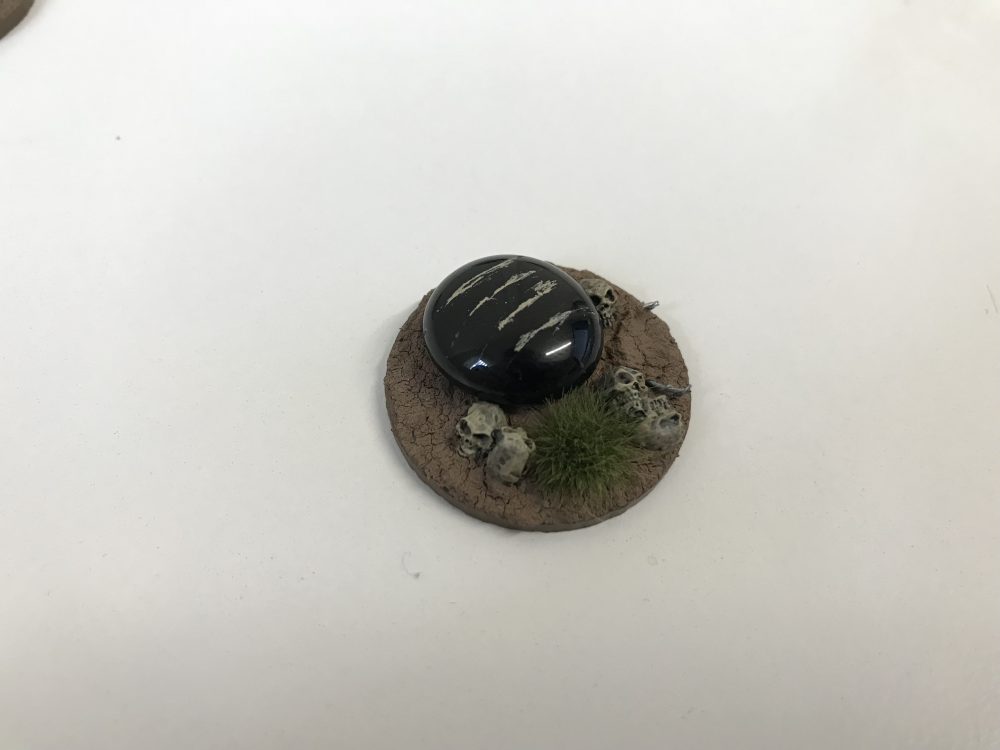 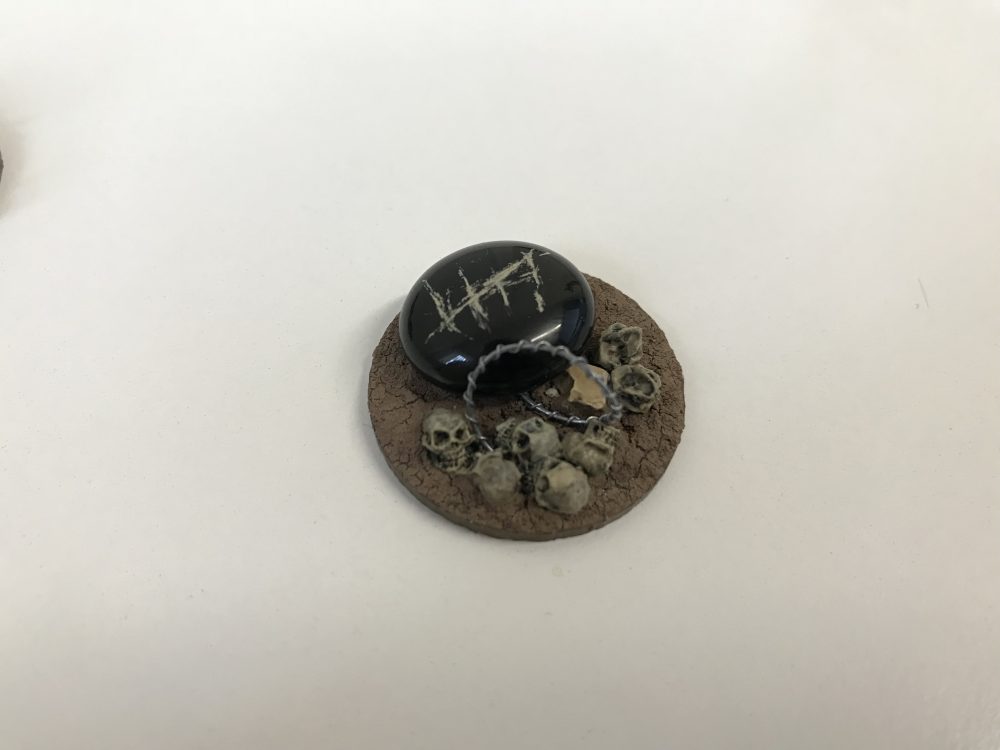 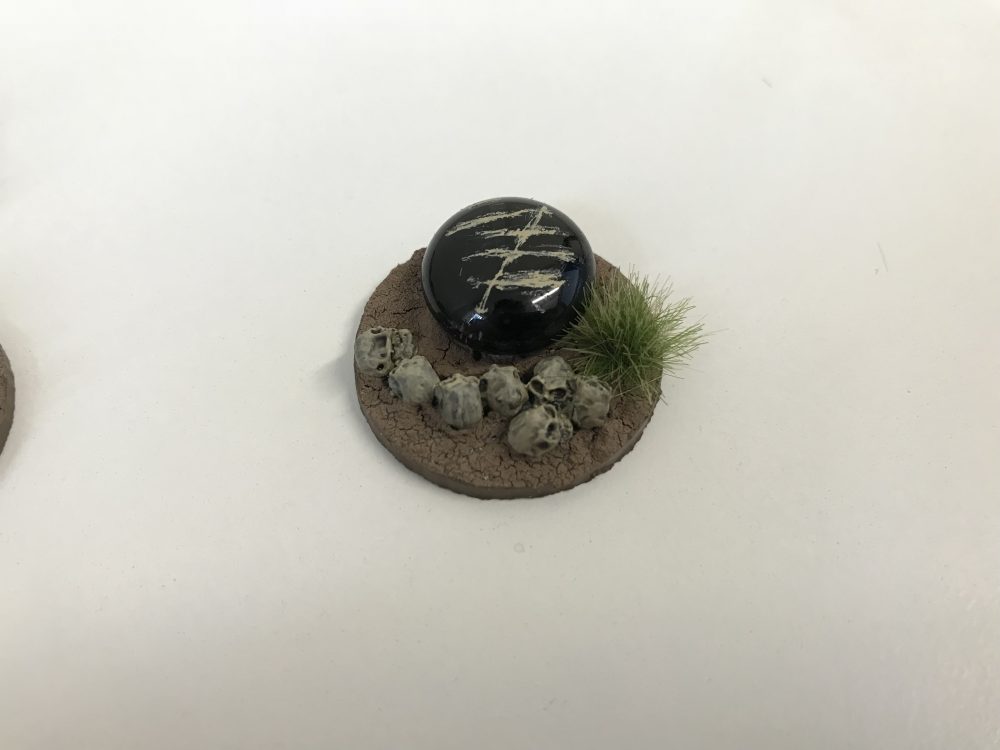 How to Counter Astra Militarum Artillery