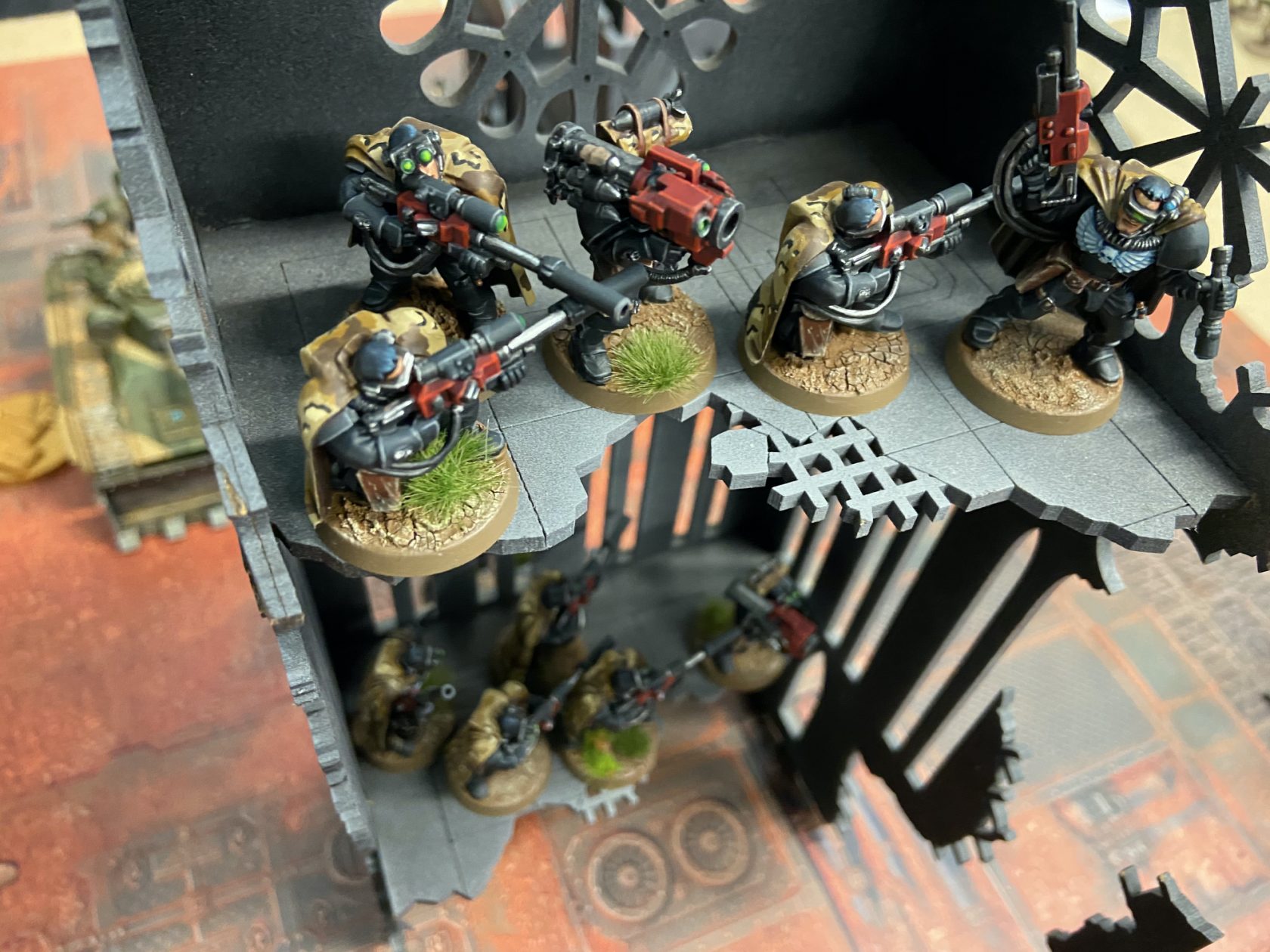 My newly painted Raven Guard Scouts get their first game!

This is my first Astra Militarum Crusade game with my newly acquired Raven Guard Scouts from Red Eagle Studio. This was a 55 Power Level game and I used a few Requisition Points (RP) right away to increase my Supply Limit to 55 from 50 Power Level. I also gave me Company Commander a Warlord Trait and a Relic, along with an extra Relic for the Space Marine Lieutenant with Jump Pack.

I went with Lord’s Approval and Agile Warriors for their Doctrine, this gives Infantry a re-roll when Advancing and melee weapons have an extra AP when within 9″ of an Officer. That, of course, does not work for the Raven Guard units in this force.

Note that I forgot my Autocannons, so the two Special Weapon models you see in my squads that are not Meltaguns are being used as stand-ins for my Autocannons. 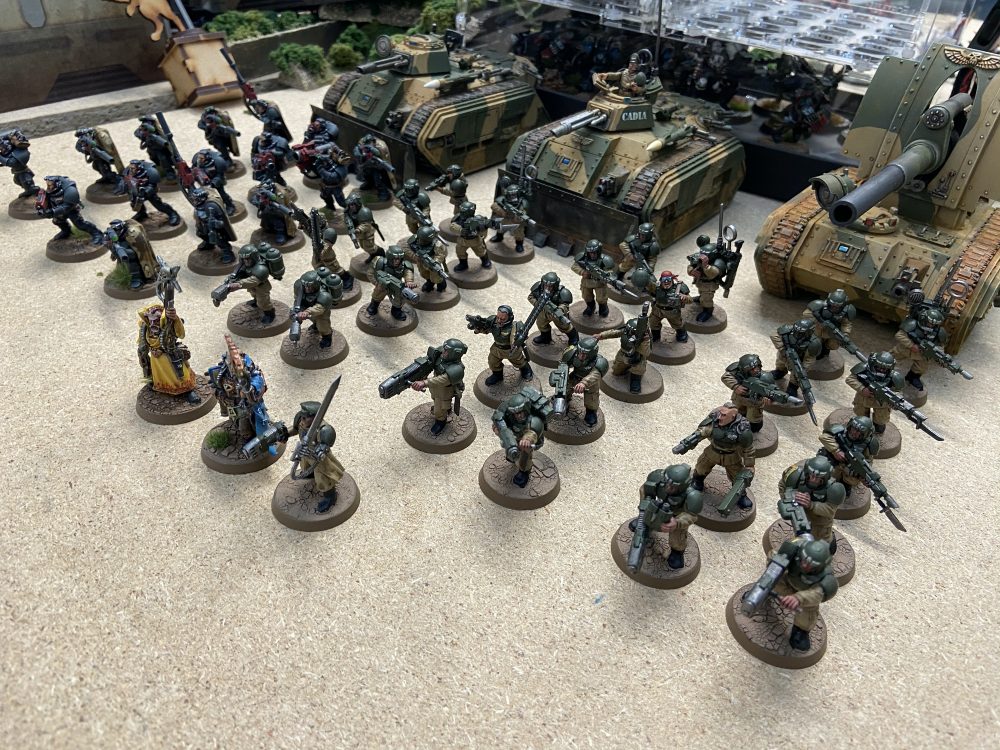 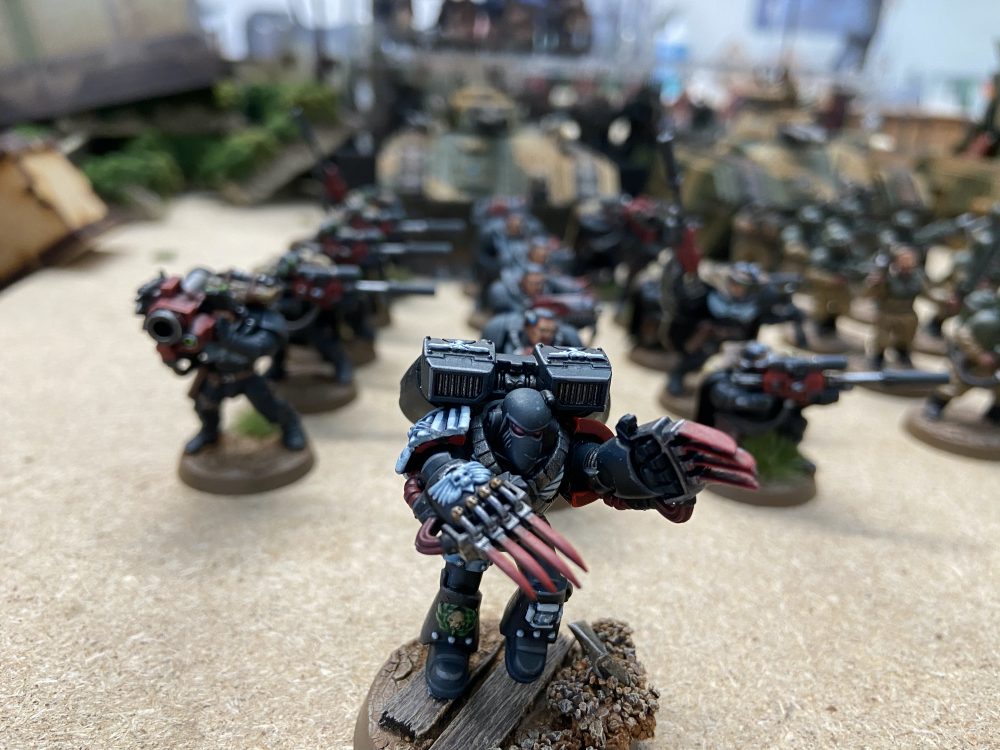 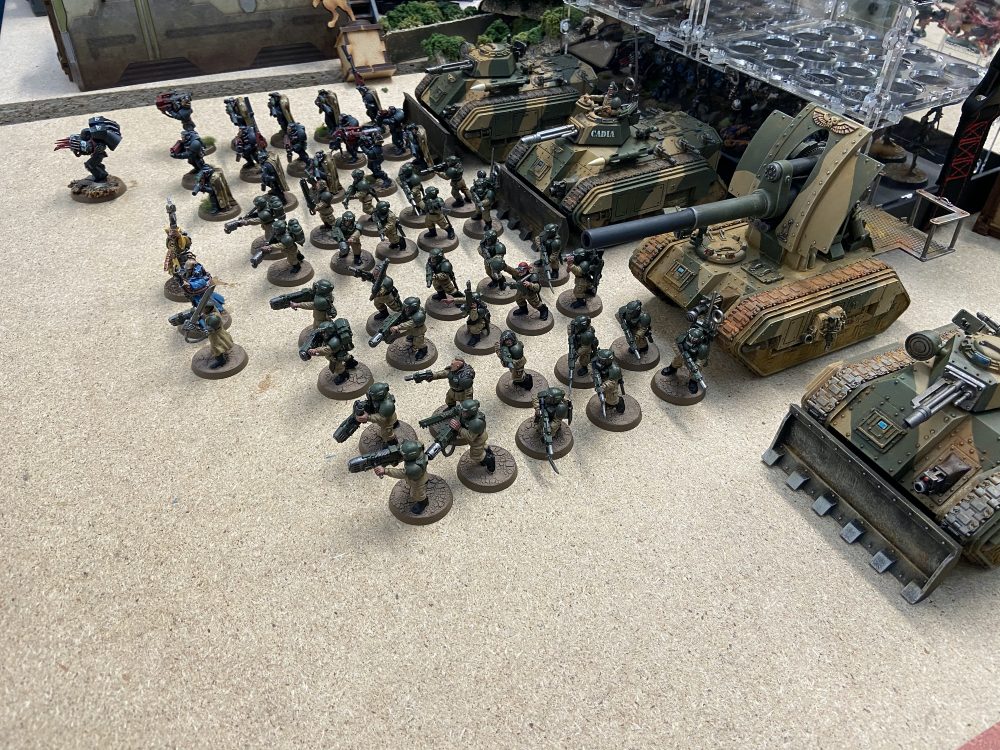 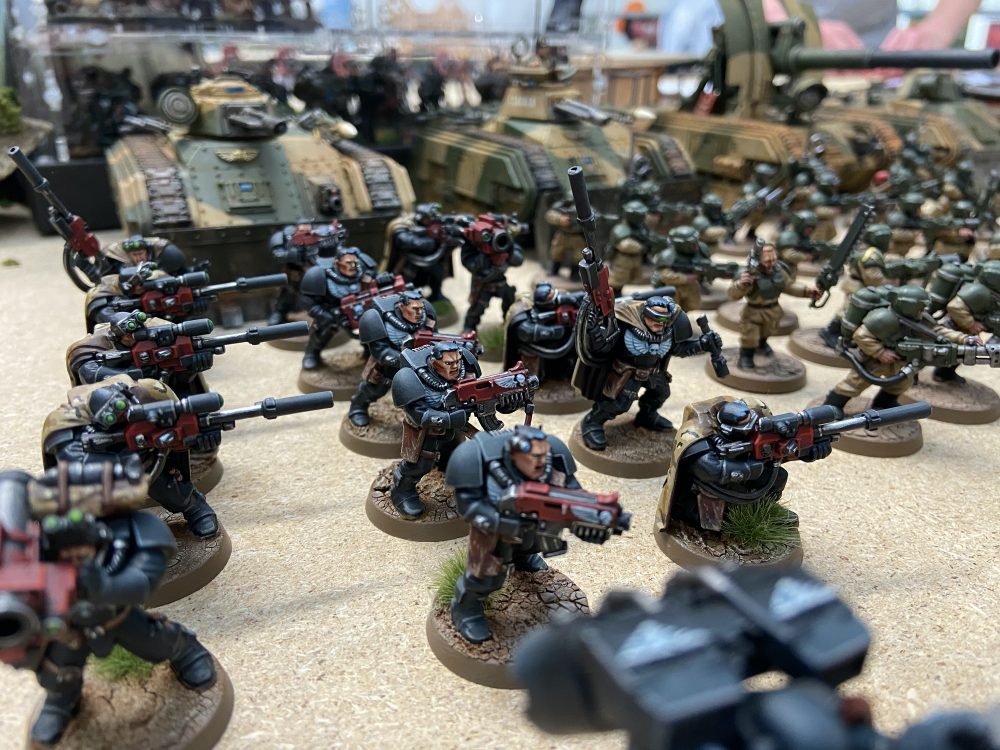 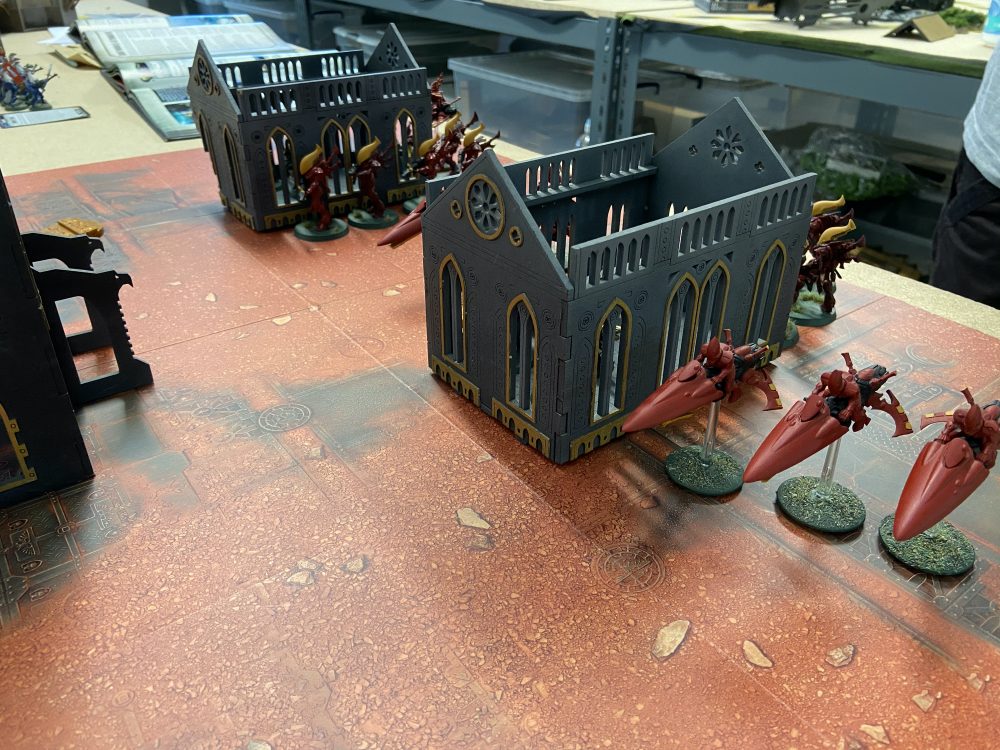 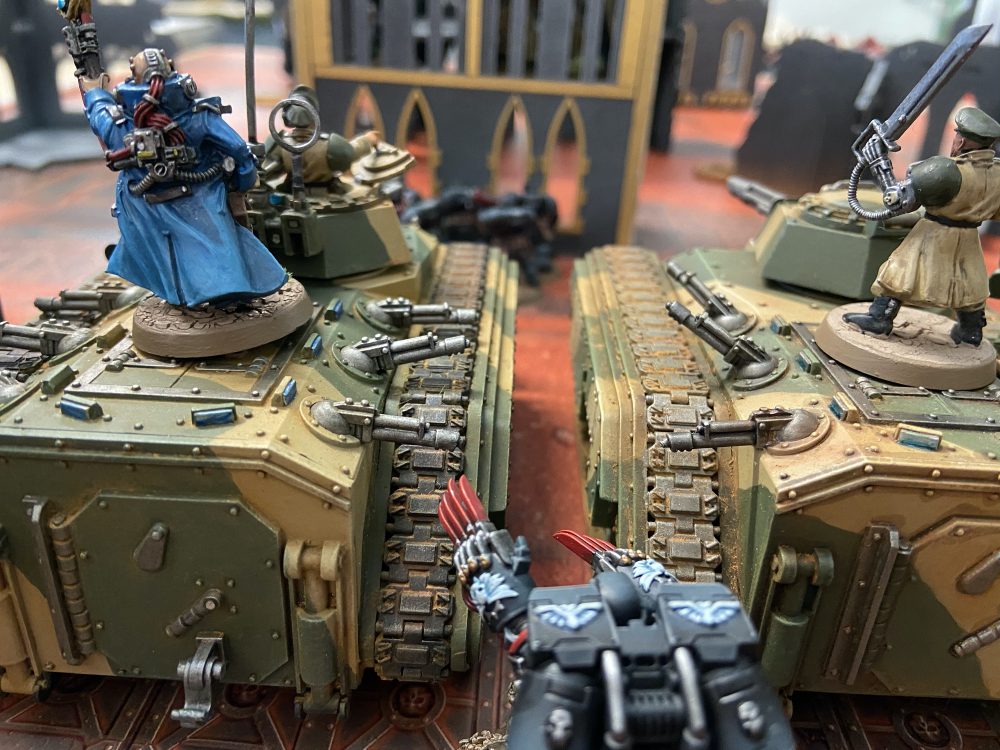 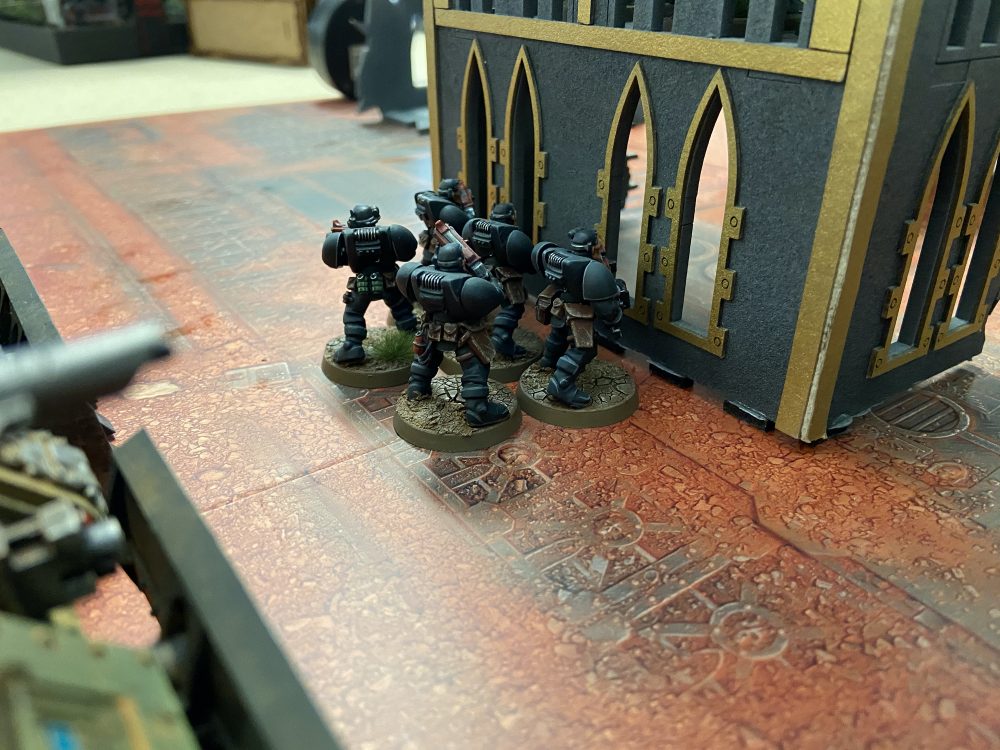 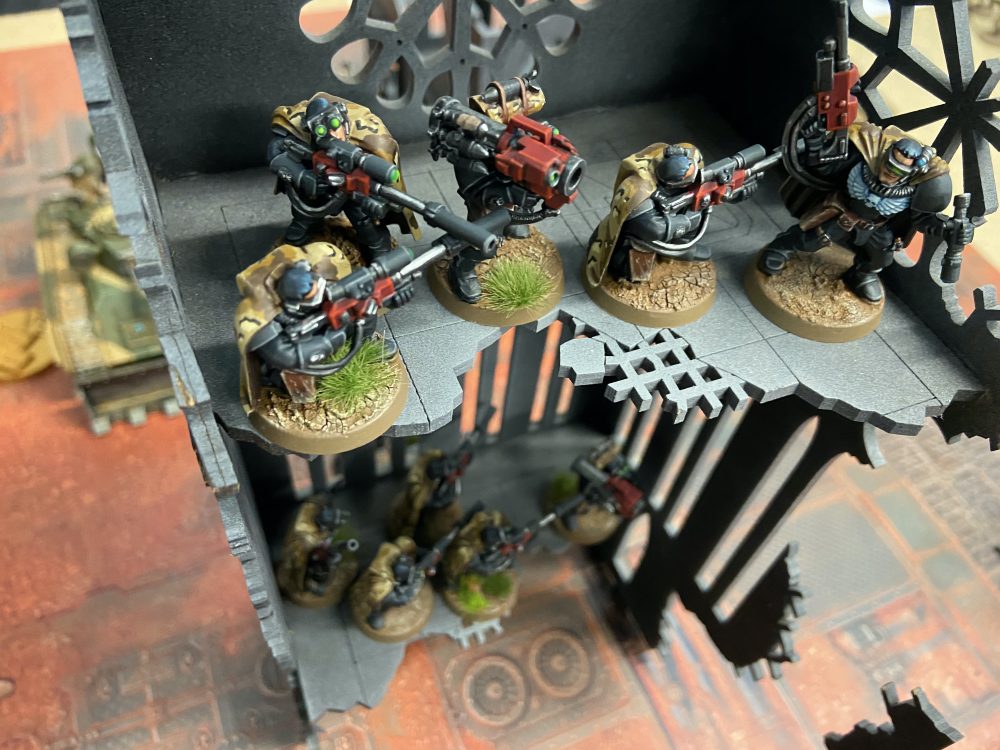 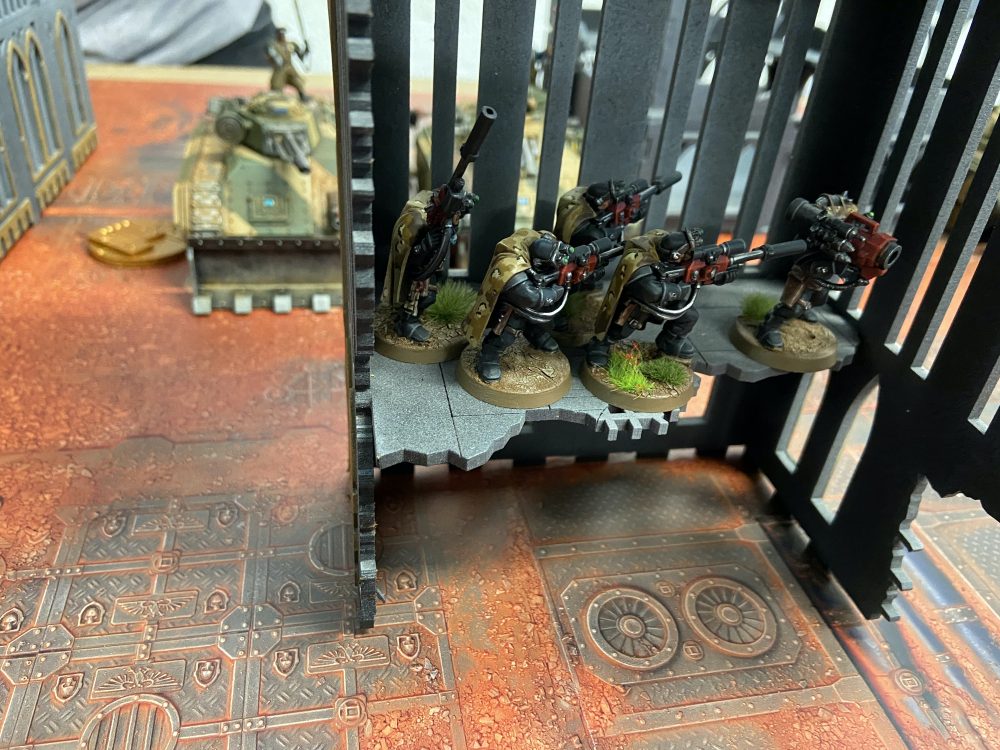 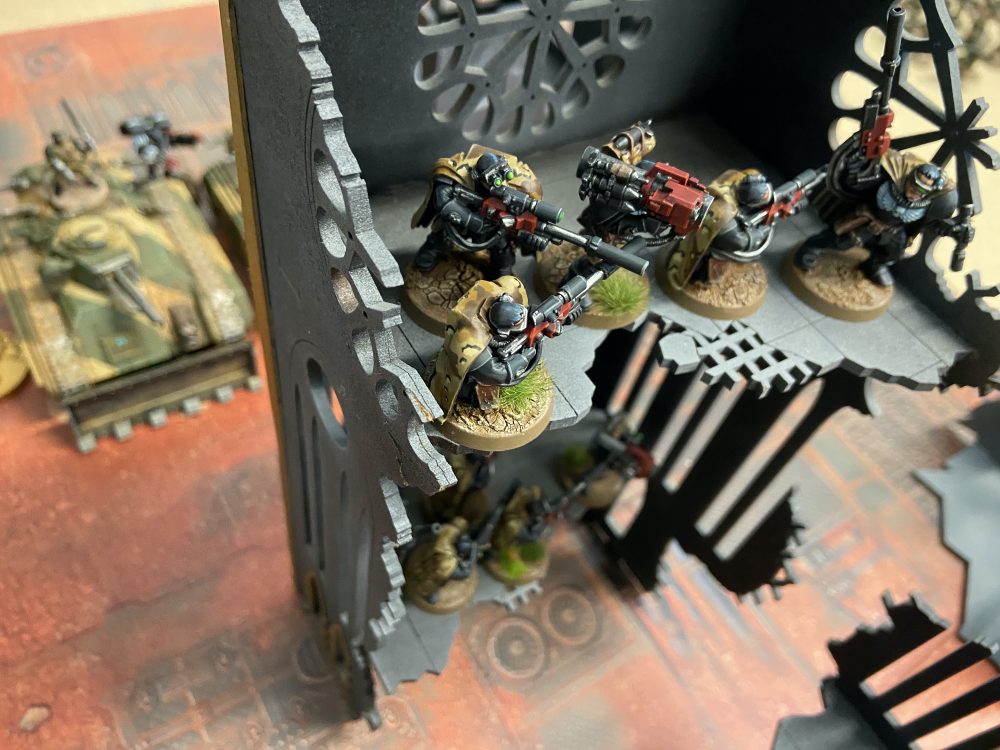 We played Supply Cache which is pretty simple, it has 4 objectives we placed, alternating. And then we score at the start of our Command Phase, but not in the first Battle Round; 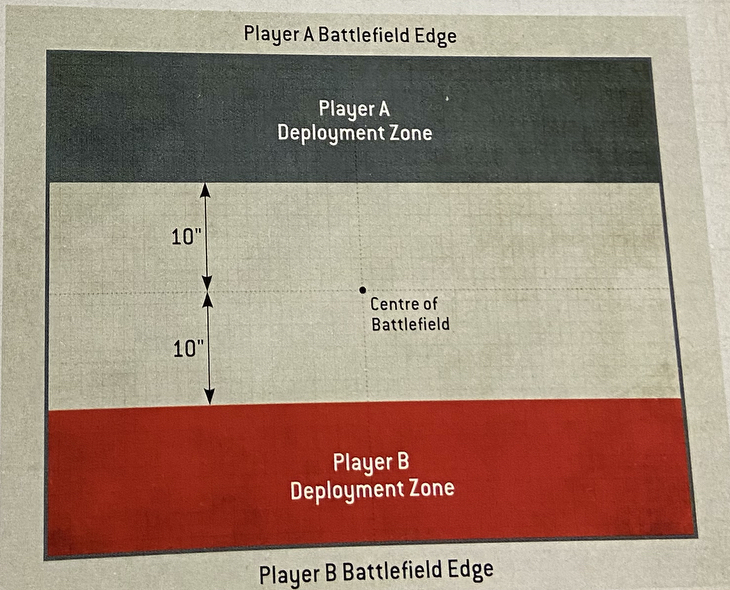 We were using the new minimal board size using two of the Kill Team boards – I think. This meant the battlefield was 44×30″, with the width at 30″ and No Man’s Land being 20″ that left us a 5″ Deployment Zone each. This made it impossible to place an objective within our Deployment Zones because an Objective has to be 6″ from the table edge. We could have made the table bigger, but that would mean playing off the nice Kill Team board. So we turned the table 90° and deployed on the short edges. Problem solved. 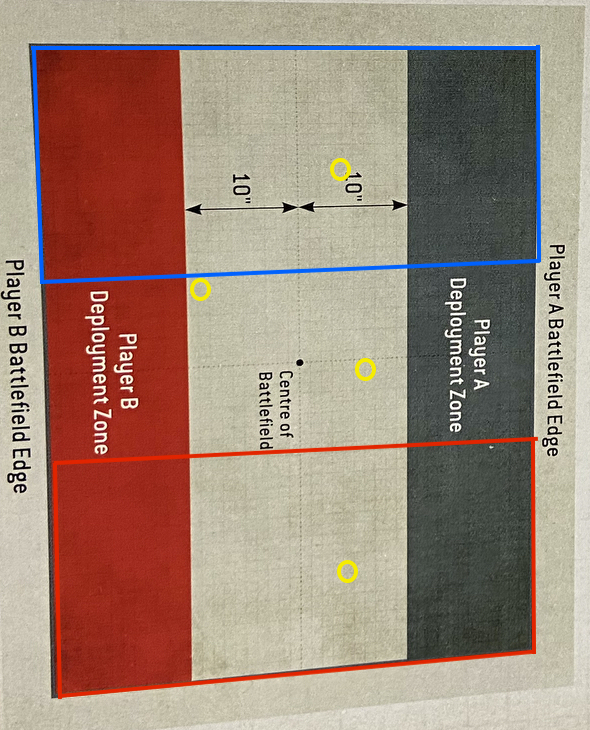 I thought that Agendas were like Secondary Objectives, which they are, sort of. They are mini-missions that if completed grant extra experience to your units. So they will not affect who wins the game.

Priority Target seems like a really nice one, as it allows you to gain XP across your whole force. But, it would have been useless for me to take as the Eldar had no Monsters and no Vehicles.

The Eldar got the first turn.

I used the Infiltrate Stratagem to move my Lieutenant up the battlefield and out of my Deployment Zone to join the Scouts.

My first mistake was placing my Raven Guard outside my Deployment Zone and at the forefront of the battle. I lost both Scout Squads of Snipers along with the Missile Launchers. The Jetbikes were able to move forward and easily get shots onto them and from within 12″ – so no -1 to hit.

A Chimera took a bit of a battering from the Dark Reapers, but it was not bracketed.

On my turn, my shooting was not great. But you probably already expected that having lost two-thirds of my Scouts and not having much in the way of firepower anyway. The Basilisk went was going to go for the Dark Reapers as they were across the board and the Eldar’s decent anti-tank units. But, instead, I went for a unit of Jetbikes and killed just two. The Wraith units were still a way off in the enemy Deployment Zone.

The one remaining Jetbike from the Basilisk attack was charged by my Guardsmen that did get out of a Chimera, but he survived. My other two Chimeras had moved forward without disembarking their troops.

The Lieutenant moved up into the ruins and then charged the enemy Farseer who survived on two wounds and then who did two wounds back to my Lieutenant. Sniping the enemy psyker on turn one had failed.

The single Jetbike failed Morale and ran! We chalked this kill up to the Infantry Squad (rightly or wrongly) that had charged them, yet dealt no wounds. The Jetbike was clearly extremely afraid of my Guardsmen! 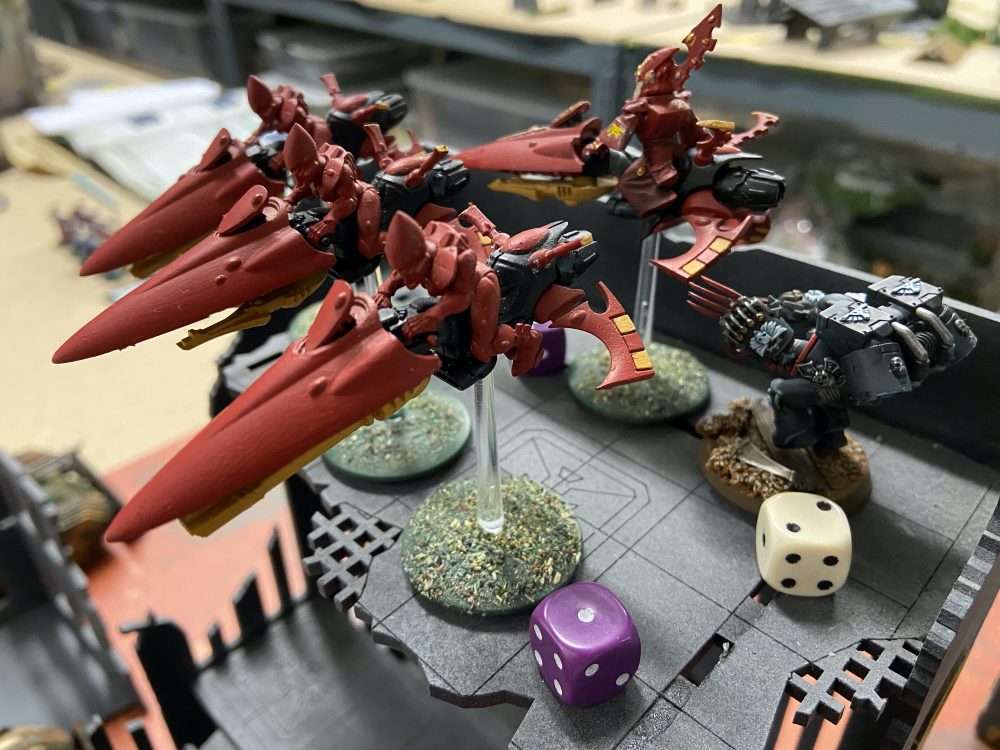 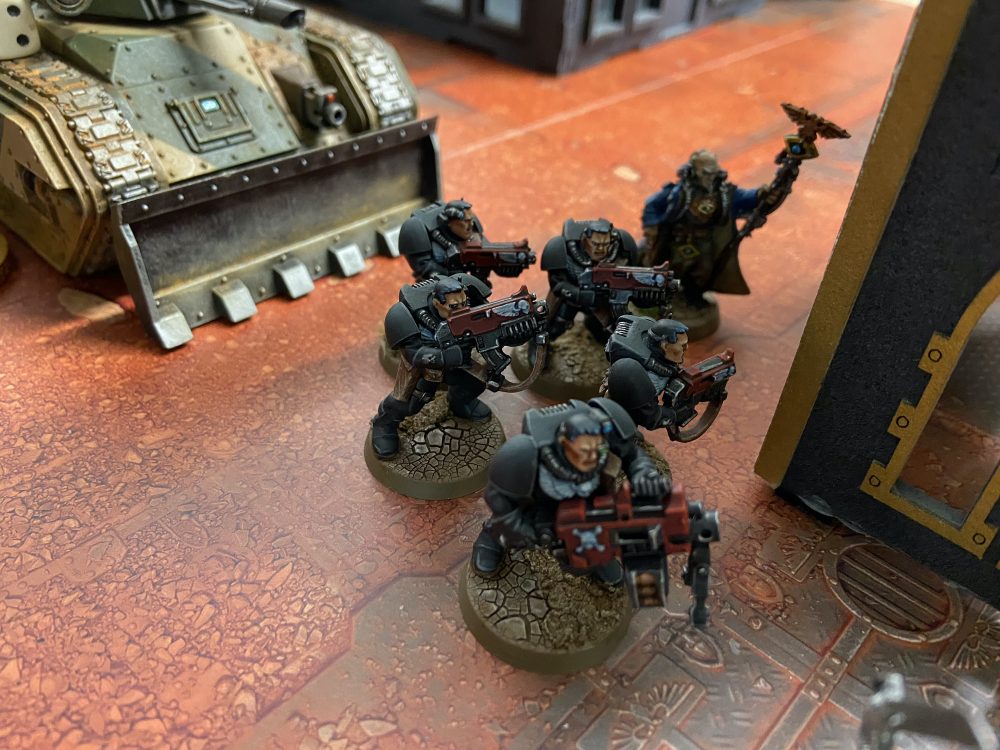 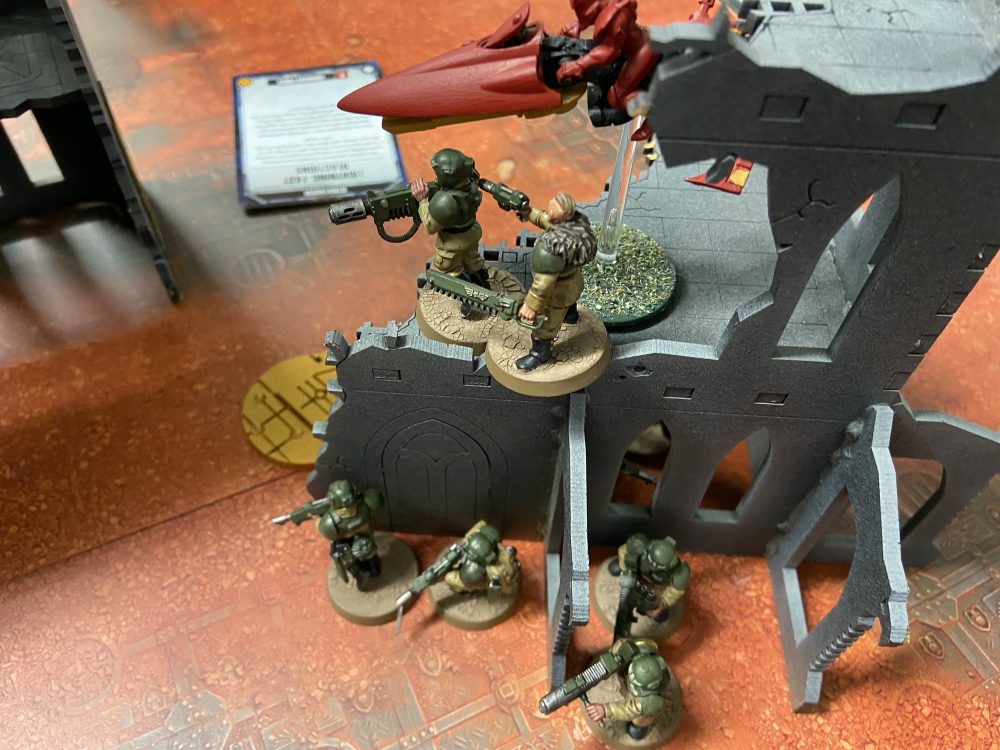 With my Chimeras now moving forward the enemy Wraithguard moved forwards to counter them. They stripped eight wounds from one Chimera, but it survived. The forward-most Chimera died from Dark Reaper fire and I lost something like four or five occupants from rolls of ones. To my amazement, the Farseer stayed in combat and we hit each other again. The Lieutenant lost no wounds and the Farseer lost no wounds, thanks to an amazing saving roll of three rolls of five. This was a slow slog of a fight!

The Chimeras are crumbling around me, my Scouts are mostly gone, although the Bolters still remained and now the unit of three Jetbikes charges my Basilisk which is in my Deployment Zone. I spend a CP to Overwatch and I spend another for Defensive Gunners. I roll four hits! I roll three wounds, but spend another CP to re-roll one of those wounds for four wounding hits in total. And the Basilisk kills all three Jetbikes in one Overwatch volley. A true hero!

Objectives wise we are drawing at this point as I have moved forward to hold two and so have the Eldar. 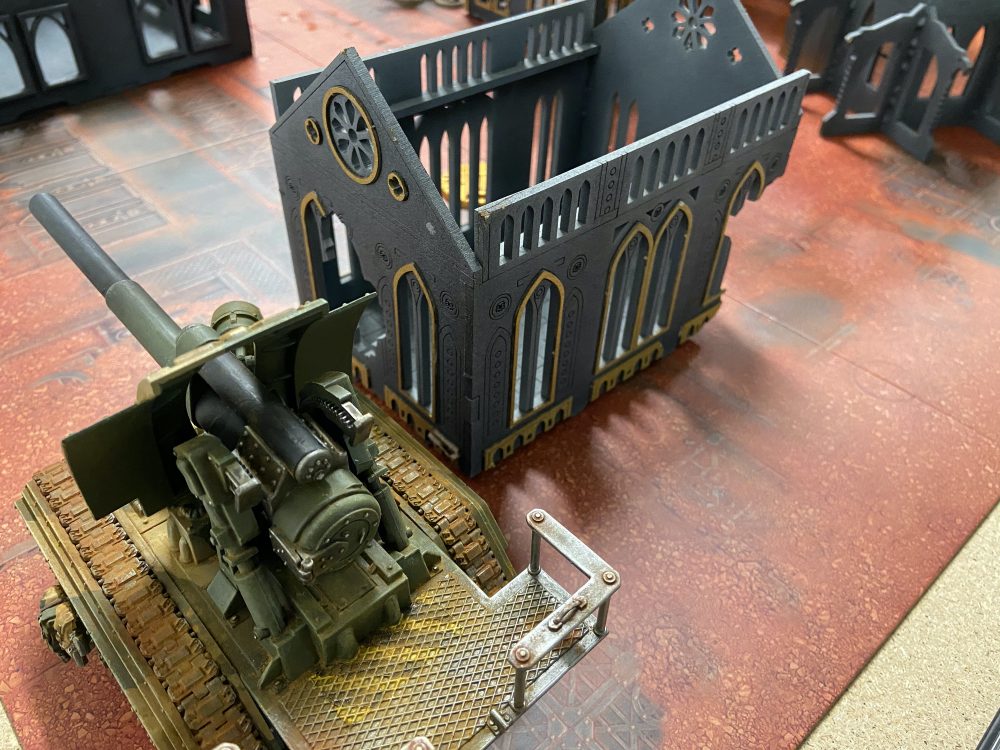 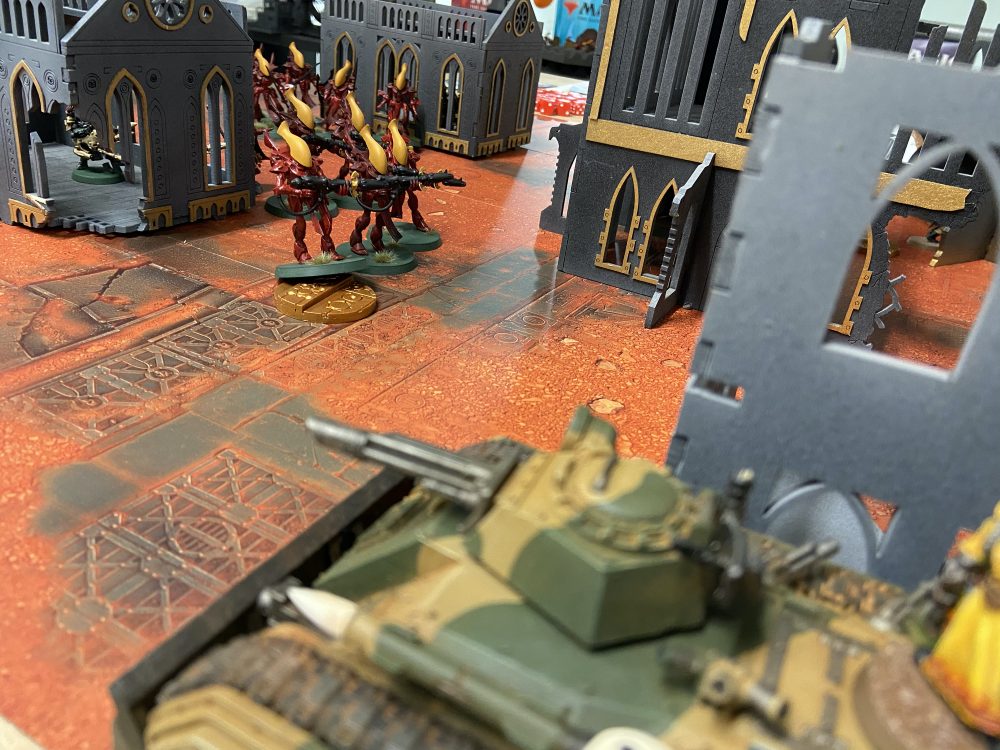 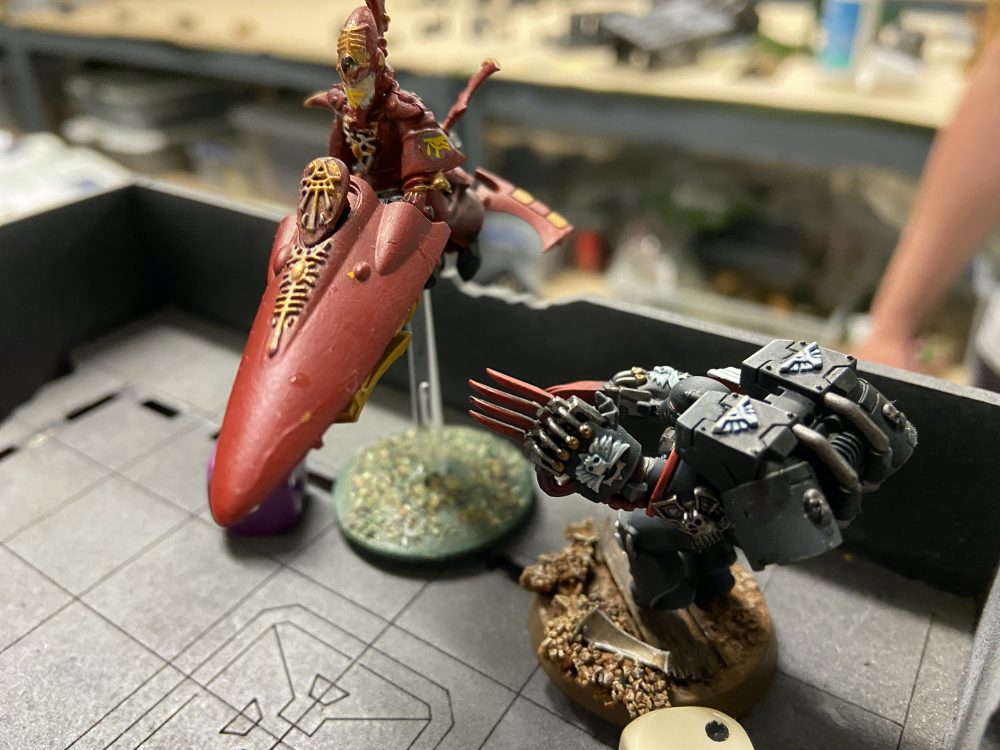 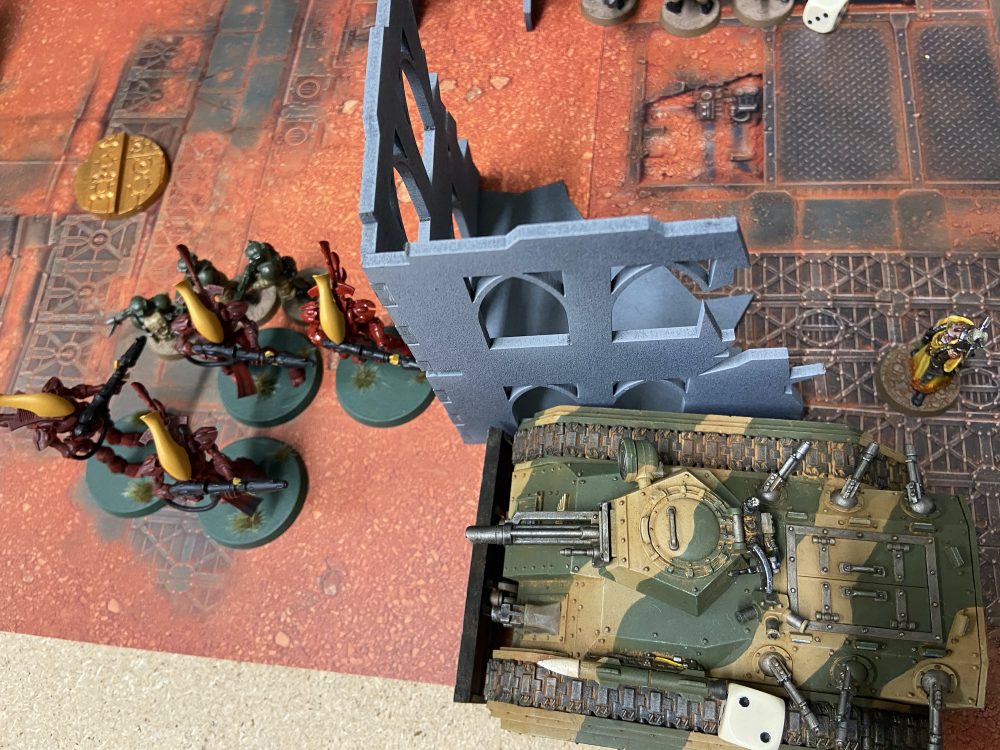 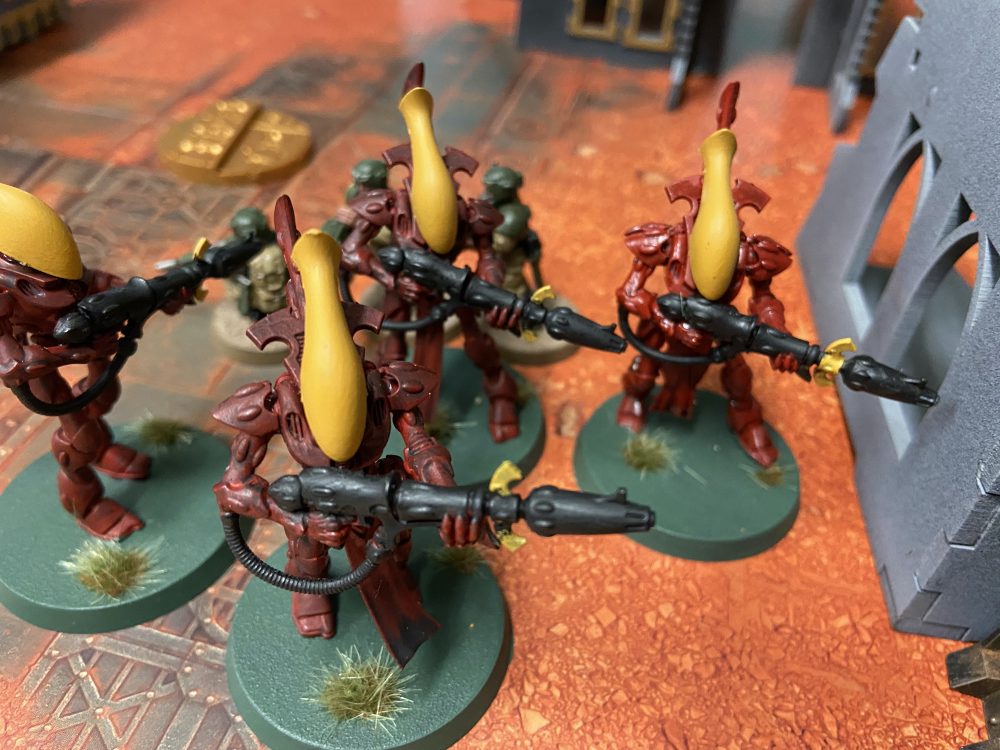 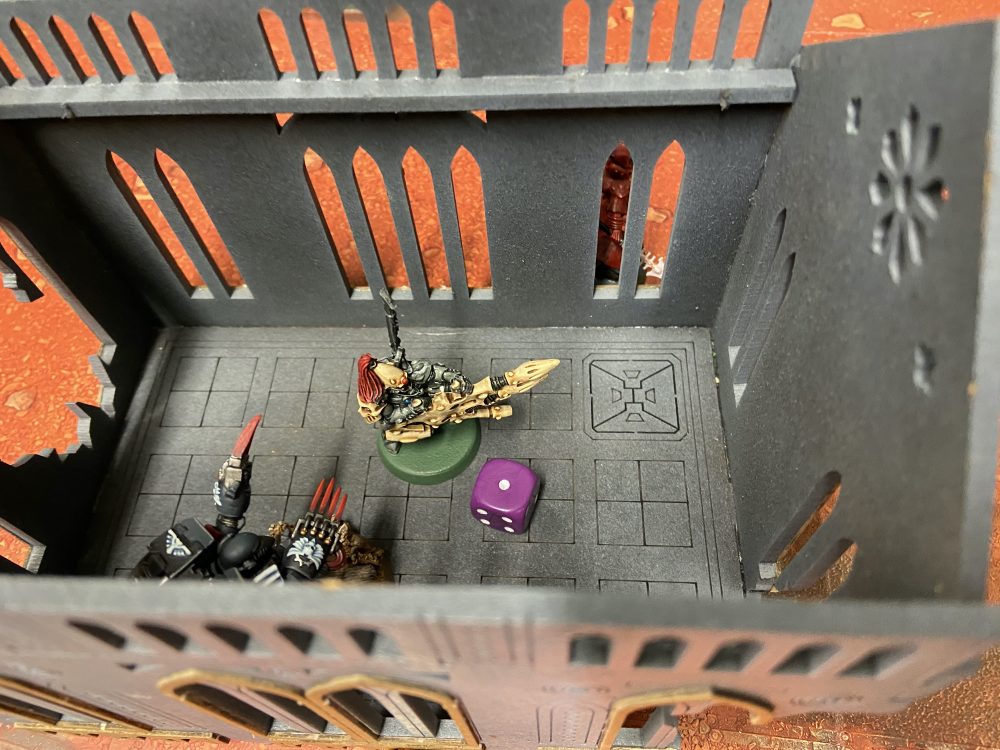 Sorry, no images for this turn.

So, from memory, the Eldar Dire Avengers arrived into my Deployment Zone and opened up against the Basilisk. He lost some wounds but was not bracketed.

The Wraithguard continued their purge of my frontline of Chimeras and Guardsmen. Wiping them all out and leaving me just one Guardsmen on a central objective. He was lost to Morale I was sure, so did not roll. Then I remembered that in 9th Edition you always pass on a one, so I rolled… a one! This guy survives and remains on an objective ready for my Command Phase in turn two.

The Wraithblades are now moving forward and into the centre of the table to start making it onto objectives in turn four.

My turn was abysmal from what I remember. The Farseer had broken away, and the Lieutenant was able to jump down and then charge two Dark Reapers, he killed one. Argh! The Lightning Claw Lieutenant with five attacks could not kill two Toughness three models! The Basilisk also killed two Dark Reapers and thus not the squad – leaving the Exarch and his Tempest Launcher (that can target unseen units) to wreak further havoc on my infantry.

Things were looking grim for me at this point. But thanks for the Morale pass last turn I was able to hold onto two objectives and therefore still score.

The Xeno’s clamp was now well and truly tightened onto my much-diminished Astra Militarum Crusade. The Basilisk was destroyed in this turn and so was my single heroic Guardsman on his objective. My Warlord was also killed at this point and only a single Astropath remained in the middle of the battlefield. I was to be tabled it seemed.

The Eldar had all but the objective in my Deployment Zone at this point. 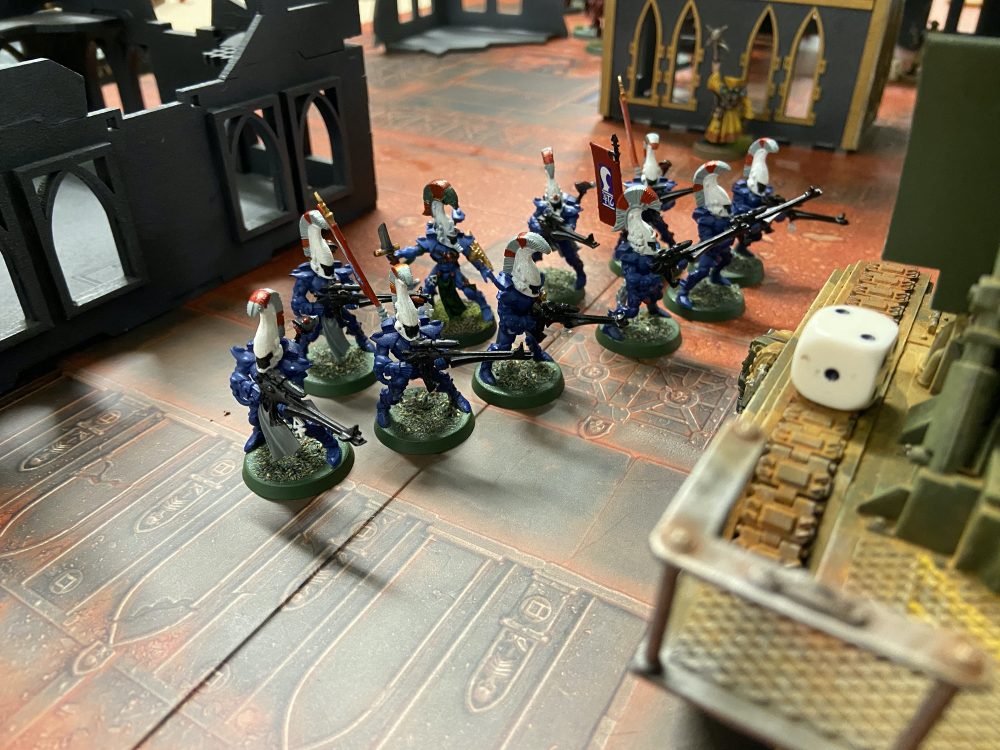 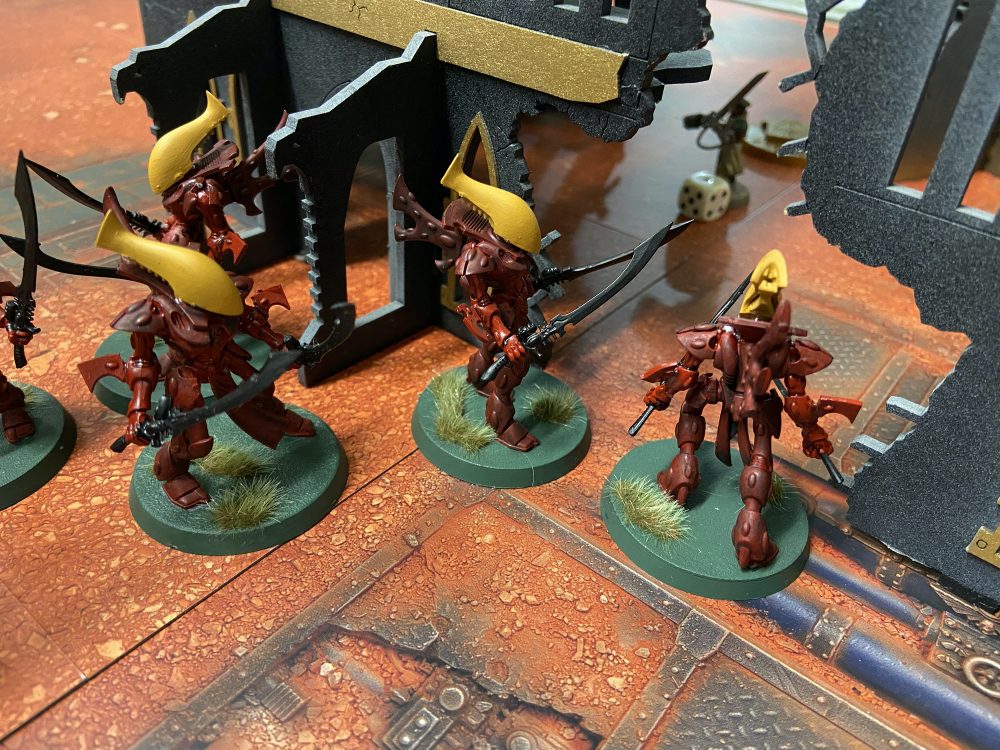 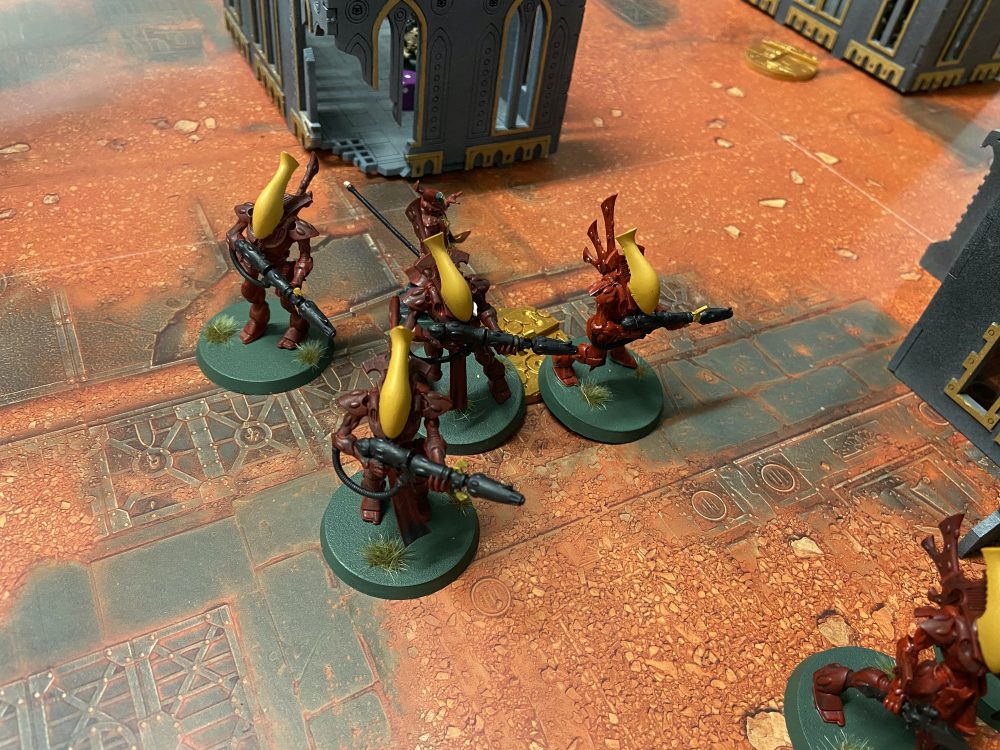 The final turn would see my Astropath dead for sure and the Eldar take all objectives and score the maximum points for this turn. Well played John!

I was outplayed I feel, John cautiously stayed back and let me come to him in my Chimeras. I also used the Scout’s ability to forward deploy out of my Deployment Zone – because why not? In hindsight, this was a terrible idea. The Guardsmen are my footsloggers, my fodder and my speed bumps – not costly Scouts that can actually do some damage. The Guardsmen should have gone forward and the Raven Guard Scouts should have stayed back and taken out targets from afar. They also would’ve benefited from the -1 to hit being further away.

After the battle I gained 1 RP, to add to the 1RP I had from my initial 5 and then I did the following;

The Basilisk is now a decent anti-tank weapon and the Space Marine Lieutenant is an even better character sniper. He is only 5 attacks though when he charges, which is not great but I like the double Lightning Claws. At some point, when he increases his rank, I want to give him a Weapon Enhancement called Fleshbane, which will increase his Lightning Claw Damage from 1 to 2.

You can see my full Latest Crusade Sheet here, as a handy table.

At some point, I want to add this boi to my Astra Militarum Crusade. With the Jump Pack Lt, Scout Snipers and this guy – I could start to make this into some form of assassination force… 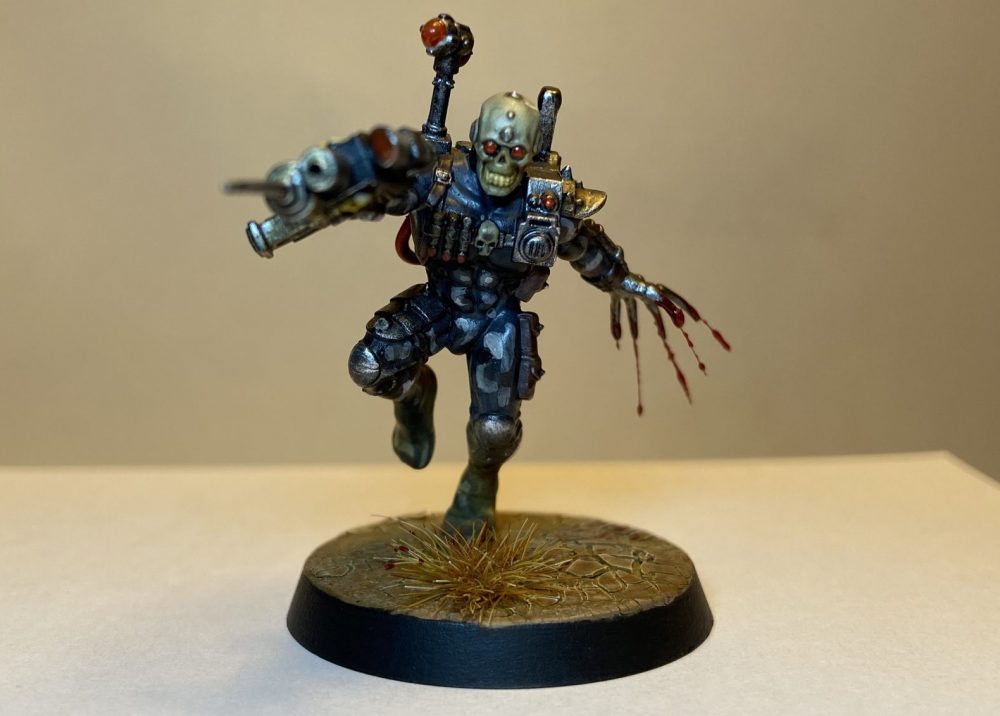