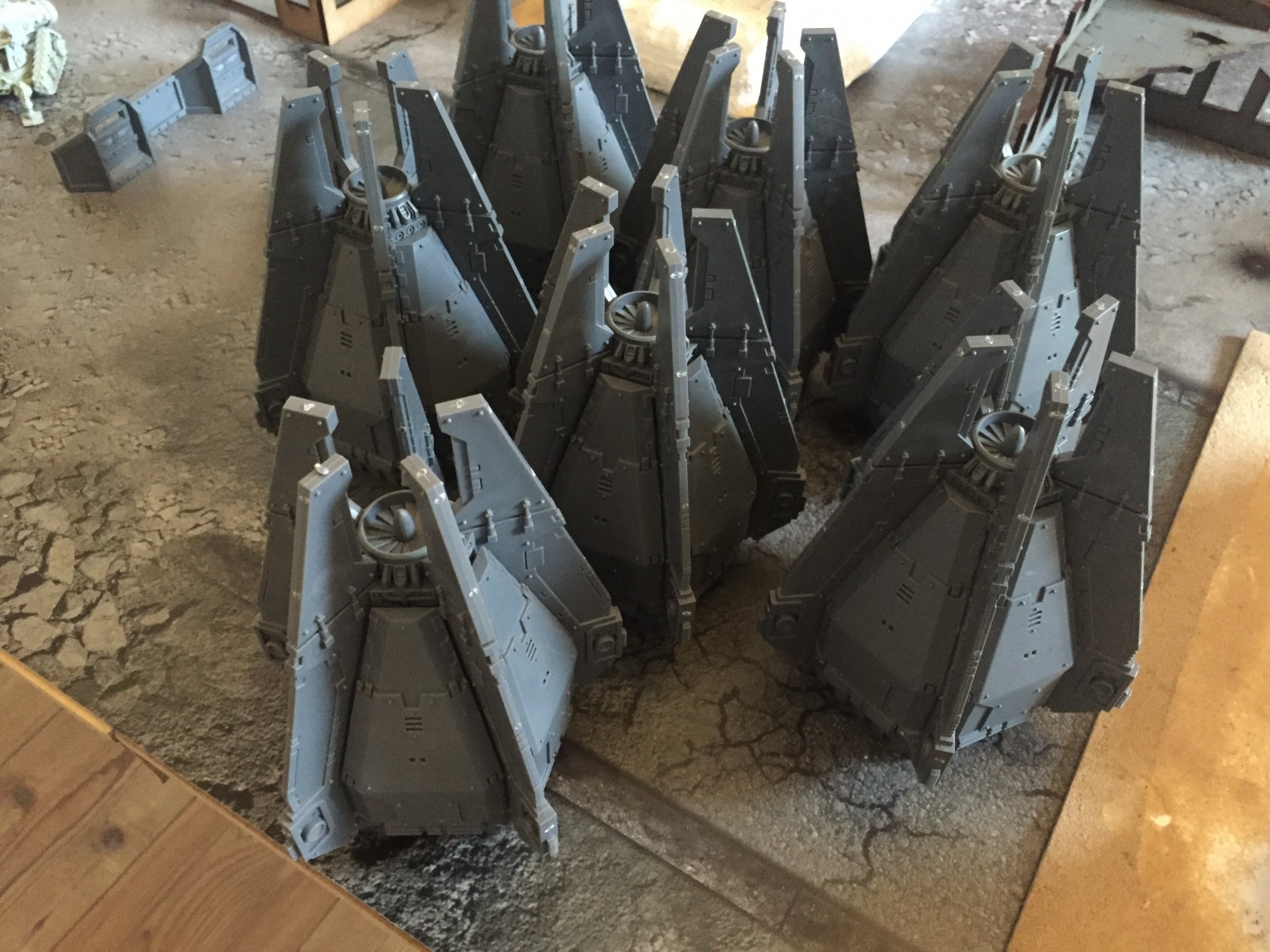 Find out what happens with 7 Drop Pods Vs Astra Militarum

It’s been over a week now since my two 2,000 point defeats against the Salamanders. Some time to reflect and think about why I lost – oh yes I know why, I was playing against 7 Drop Pods.

7 Drop Pods is a tough fight for any force, I know it could’ve been 10 Drop Pods in a 2,000 point list but 7 is plenty enough. I could imagine this battle giving Eldar and Necrons some tricky situations to deal with. So for the Astra Militarum it really was a tall order.

This is best I can guess from the list; 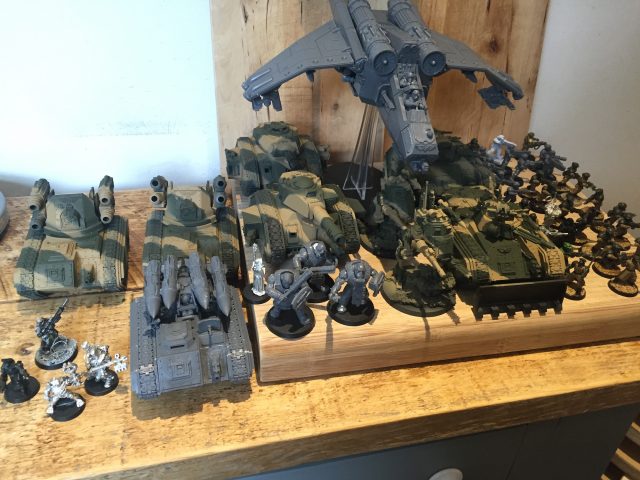 2,000 point Astra Militarum force – ironic I photographed these on a chopping block, as they were BUTCHERED!

The first game was a rather one sided affair in terms of losses taken. As for VPs I have no idea, I lost anyway, which is to be expected when you have no table control.

I went into the games knowing I was playing against 7 Drop Pods but hadn’t gone OP or mad trying to counter the Deep Striking list of hell. Instead I’d given it some thought, took some hard hitting stuff and deployed ready for a close and gritty battle.

I castled up in the left hand corner of my deployment zone. With three corners of ruins encapsulating my Enginseer, Wyverns, Bullgryns  and Manticore – shown below at the bottom of turn 1 I believe. They were all spread out too to stop the Pods coming in too close and hopefully forcing them to land outside of the ruins I’d placed myself inside of. That failed, one got in with a Dreadnought – just. 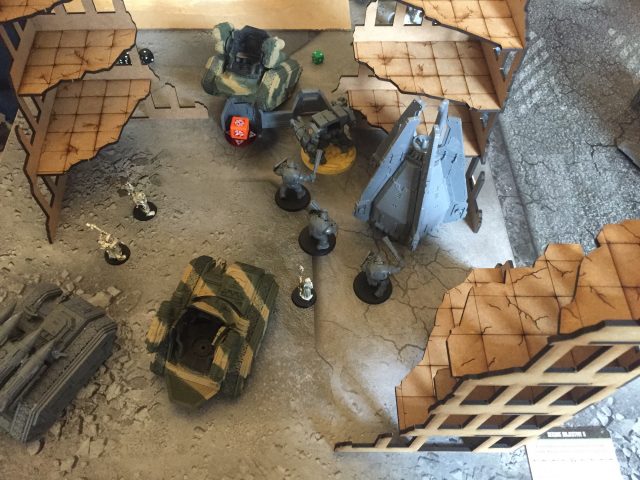 Pask and his buddy started further forward in some terrain – just above where that wonky Wyvern is in the image above. Pask needs to move away from the juicy Wyvern and Manticore targets and also give him a chance of using his 24″ Punisher Cannon. It’s short range is a real down side. Its also fairly ineffective against the Dreadnoughts the Salamanders had.

A single Veterans squad was placed on the right flank, near but not on an objective.

My reserves would come on after his Pods came down. Two Chimeras with 3 Meltaguns in each should be enough to dent those Dreadnoughts (although only two can fire from within the Chimera). Sentinels would outflank and run interference using their Lascannons. The Valkyrie would kill stuff and grab an objective if possible using the Grav Chute Veterans with 3 Meltaguns.

I think this loss came down to not deploying very well. What made it worse was that I thought I had deployed well. A Drop Pod got in close and the others got in just outside of the above picture. This meant my stuff died in my little castle which meant on turn 2 the Command Squad Drop Podded in right next to my Bullgryns and on the rear or side facing of my vehicles.

Pask ended up being too far away to lend a hand and was taken out by Krak Grenades from some assaulting Tactical Squads. I think he also got a Weapon Destroyed which turned out to be his Punisher Cannon – so he was useless too. I also realised too late that the Enginseer can repair a Weapon Destroyed result, I may not have moved Pask up and away if I had known this from the game start. My fault.

The Assault Marines are a real pain, they can move far easily and take objectives with ease – especially useful in a Maelstrom game. I had nothing really to counter them, anything that left the safety of my deployment zone was quickly targeted and brought down by the Thunderfire Cannon.

It was a fun game though!

The second game was a lot better and felt like there was more of a fight, rather than just simply waiting to be tabled. I enjoyed it a lot more and it was a lot closer. 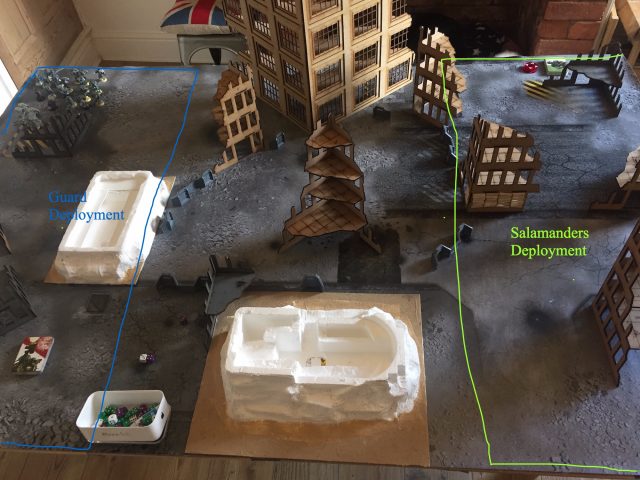 Deployment Zones – ignore the models in the top left, this is pre-deployment

I deployed mainly behind the white piece of terrain o the left side of the above picture. My Chimeras would arrive from reserver in the top left corner. I went for a similar deployment but kept Pask close this time. It was silly to move him away in the last game, I know the Salamanders are going to come to me so there is little point in moving out towards them at a great risk to Pask especially.

So we were to sit tight, wait for the Chimeras and Valkyire once most of the Drop Pods are in the battle field and move forward from there. 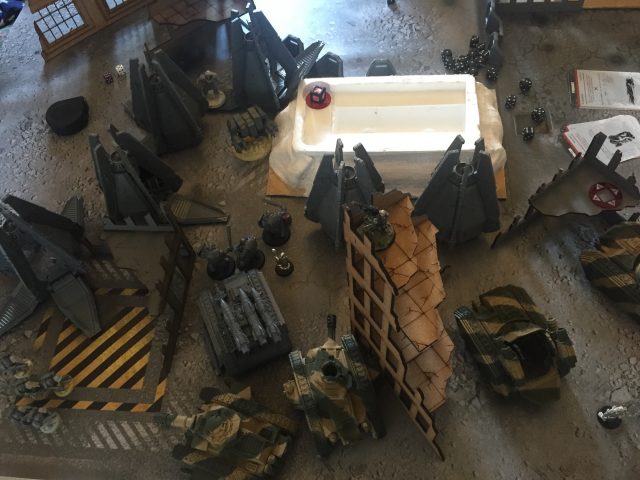 Guard Deployment Zone at the top of turn 2

The above picture shows my Deployment Zone just as the second wave of Drop Pods arrived. Some units are yet to disembark (my opponent was still placing models). But this is a mess, points to note;

There was another Drop Pod with the other Dreadnought in, it missed the table and was lost! Yayyy! This was a massive boost for me I think!

So this game seemed to go much better than the first. Why? Because all that mess pictured above I managed to clear out in about 2 turns of shooting. I could not believe this, and neither could my opponent. But my shooting went really well. Pask died but not before shredding some Marines. The Wyverns were killing Terminators, Tactical Marines and Skitarri with ease. The Manticore was placing some rather risky shots in order to keep the killing up but it was paying off.

The Chimeras came in and used their Multilasers plus Veterans with Meltaguns to pop some Drop Pods – those Storm Bolters are horribly annoying for Guardsmen in the open. 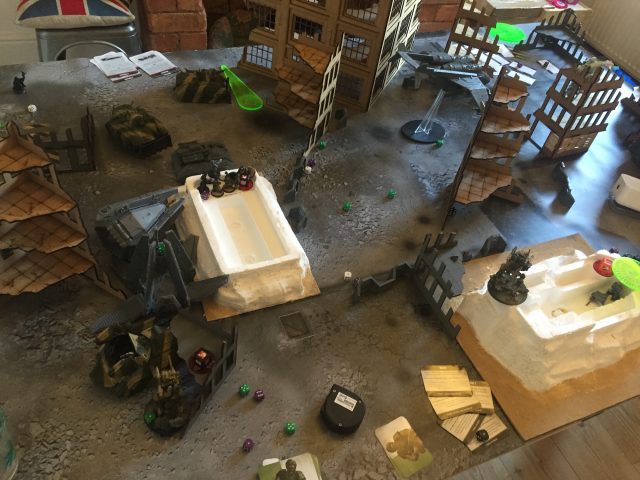 The above pictures shows my Deployment Zone 2 or 3 turns on from the previous image. As you can see most of the pods are gone as well as their occupants. I have lost the Vindicare, a Wyvern, Pask and my Bullgryns with Priest. The Valkyrie is on with its Veterans deposited just left of centre of the image on an objective in the white terrain. The Chimeras are on and moving up the far flank with their Veterans inside.

The game ended with what you see in the above photo for me and a handful of Assault Marines, a handful of Skitarri and the Thunderfire Cannon for my opponent. I still lost though! It was a case of too little too late. I had burned through so many turns clearing out my deployment zone I had no time left to finish off his last few models or make a significant impact on the number of VPs I had. But my opponent was sweating by the end of it all, thinking he might just get tabled. But the game ended and it couldn’t happen.

Hs usefulness in the first game was under serious consideration after rolling a 1 to hit and then re-rolling another 1. That effectively saw 150 points of my force useless for turn 1 which was not a good place to be in. But he came through in the end and killed the Thunderfire Cannon off. He is worth taking, but only if you chose your targets really carefully. Its easy to use the S10 AP2 shot against a vehicle but its really not doing him justice. Using Precision Shot for targeting Heavy Weapons and Characters is much more effective.

Solid, robust and deadly. A core choice always for me.

Just as in my first game at 1,000 points this big guy did really well with the Multiple Rocket Pods. Skitarri and Marines died from the 2 Large Blasts. The Veterans it drops off seem much harder to put to use as they often arrive, shoot and die. Or arrive, shoot, die a bit and then are too far away from anything to be useful. I wonder if Camo Cloaks is the way to go – dropping them into terrain for a hard(ish) to shift objective holder?

These guys tired up a Dreadnought in the first game and died horribly to Skitarii in the assault in the second game. But I think that was because by the time they got to the assault there was just one model left with one wound. They were just a through away unit at that point I believe as they could do nothing. But they are still so handy at soaking up fire and being an excellent distraction.

Veterans seem to have become a staple for me recently. I have not taken an Infantry Platoon in some time now. The BS4 on Veterans is worth it, despite their lack of bodies. It feels like they can do some hurt and do it reliably. I miss groups of 3 Heavy Weapons Teams though that come from bringing the Platoon :-(

I also notice that I forget orders, but with Veterans you often have very few or no orders as they are usually spread and you have no mandatory Platoon Command Squad (which can issue orders). While this means I have very few or no orders at all it also means I am not forgetting them which means no wasted points on Vox Casters or wasted opportunities which can be costly to one’s mind during a heated battle.

Thats all for now!