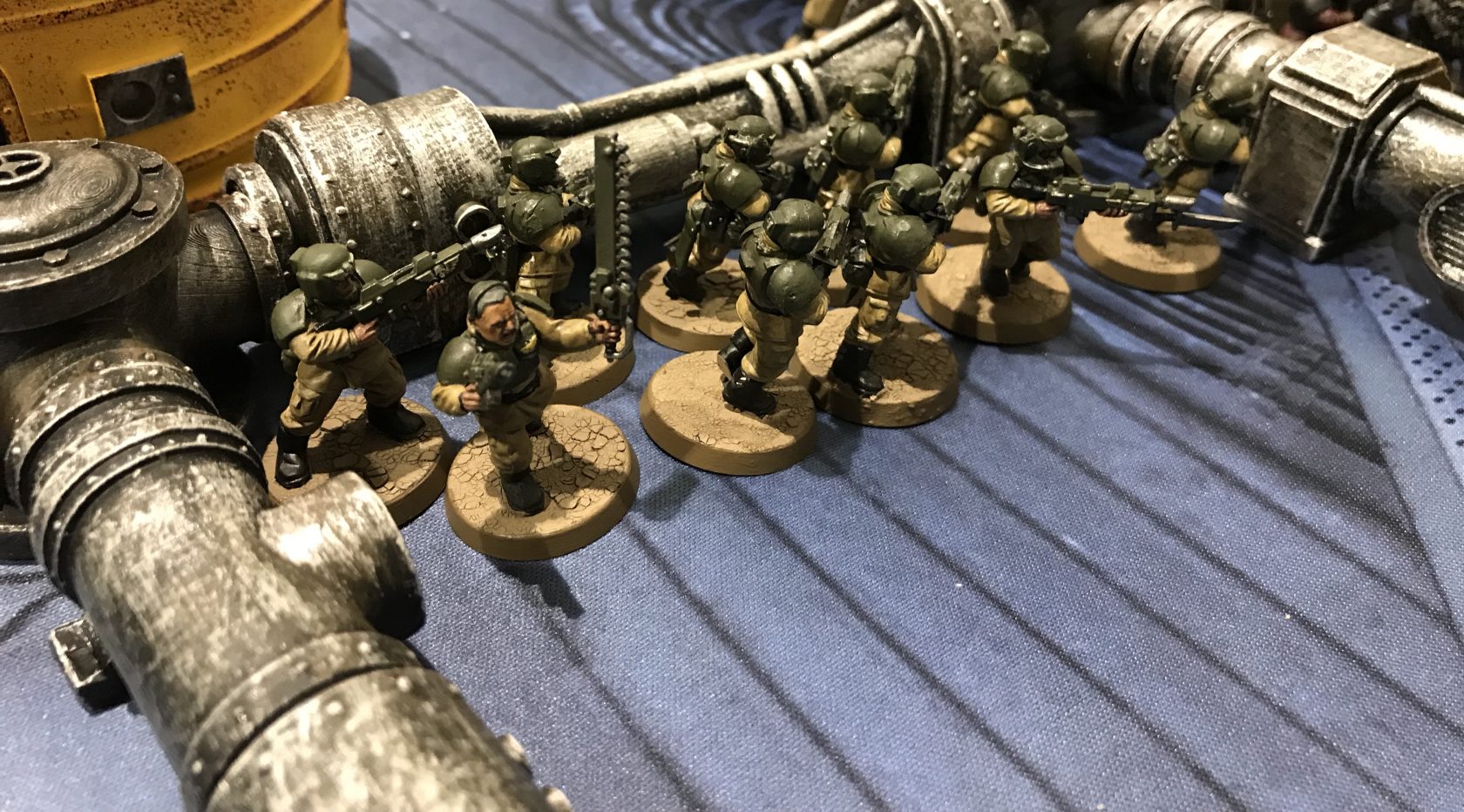 A 1,500 point battle report today of Aeldari vs Astra Militarum...

Two games in a week! What! I do t think this has ever happened before! It’s Aeldari vs Astra Militarum today at 1,500 Points at Boards and Swords again.

The mission was Tactical Objectives, Deadlock. Draw six cards turn one then up to five on turn two, up to four on turn three, etc. Stratagems cost double Command Points from turn three onwards. This leads to a lot of pressure and action towards the start of the game. If you can’t score early on, you won’t score.

I finished deploying last of course. Greg, my Aeldari enemy, chose to deploy using the Hammer and Anvil zones. The Aeldari piled most of their units onto my left flank. This is where the Punisher Tank Commander was along with Pask.

The rest of my forces were spread out to give my mortars range into the enemy and stop deep striking units behind me.

The Aeldari were using the regiment, or whatever it’s called, that means they are -1 to hit if you shoot at them from over 12″ away.

The following take up two Battalion detachments and give me a total of 13CP.

This was Luca’s list from my I Play Your Astra Militarum List article. I did have to trim it down slightly for 1,500 points – originally it was 1,750 points. But I kept the essence of the list Leman Russ and Infantry. 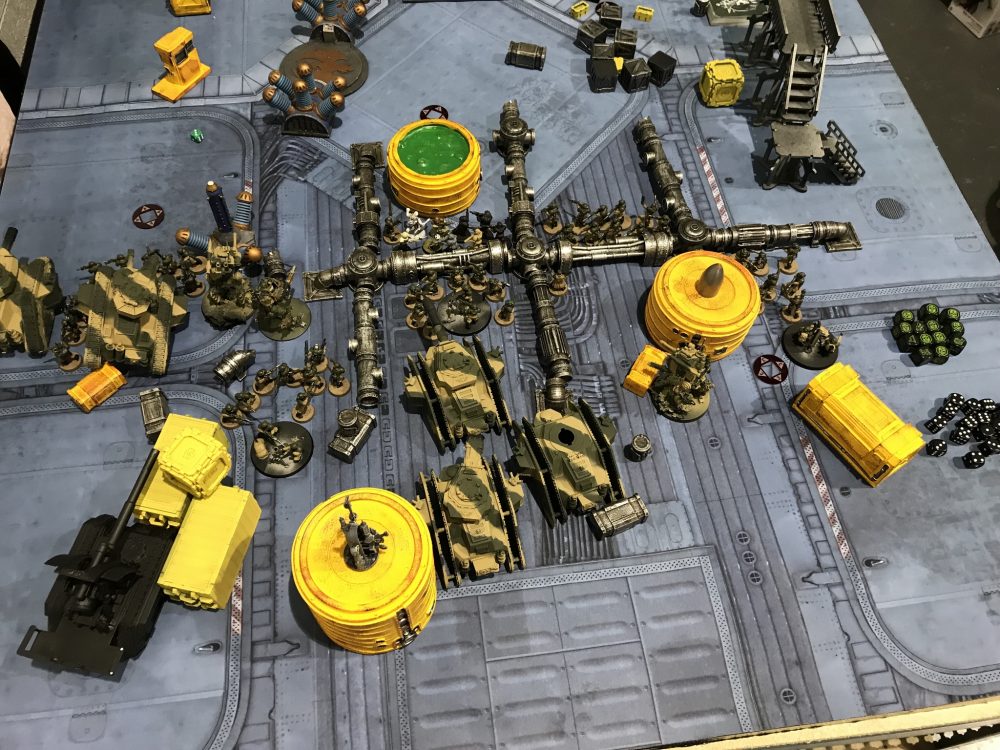 The Aeldari came out of the gate aggressive. Everything that shot, shot at Pask. Taking him down to two wounds right away. Well, that’s not good! The legend Pask is now hitting on a 5+!

The Aeldari didn’t do much else other than zip Wave Serpents around to grab objectives and score a couple of VP. 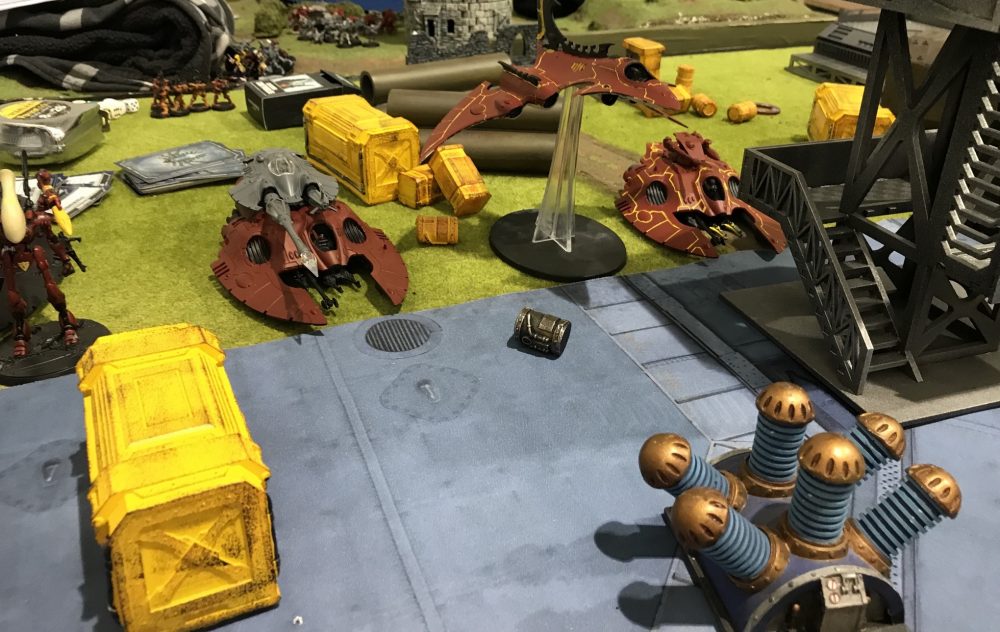 I decided that the Hemlock Wraithfighter would be my primary target for this turn. The first turn is when my shooting is the best so it made sense to go for this Hard-to-Hit flyer as soon as possible.

A brave squad moved up in front of Pask and my main battle line to claim an objective while being stared down by a Wraithlord. For 2VP I needed to hold it for two consecutive turns. Other Guardsmen also braved the centre of the table to gain ground. 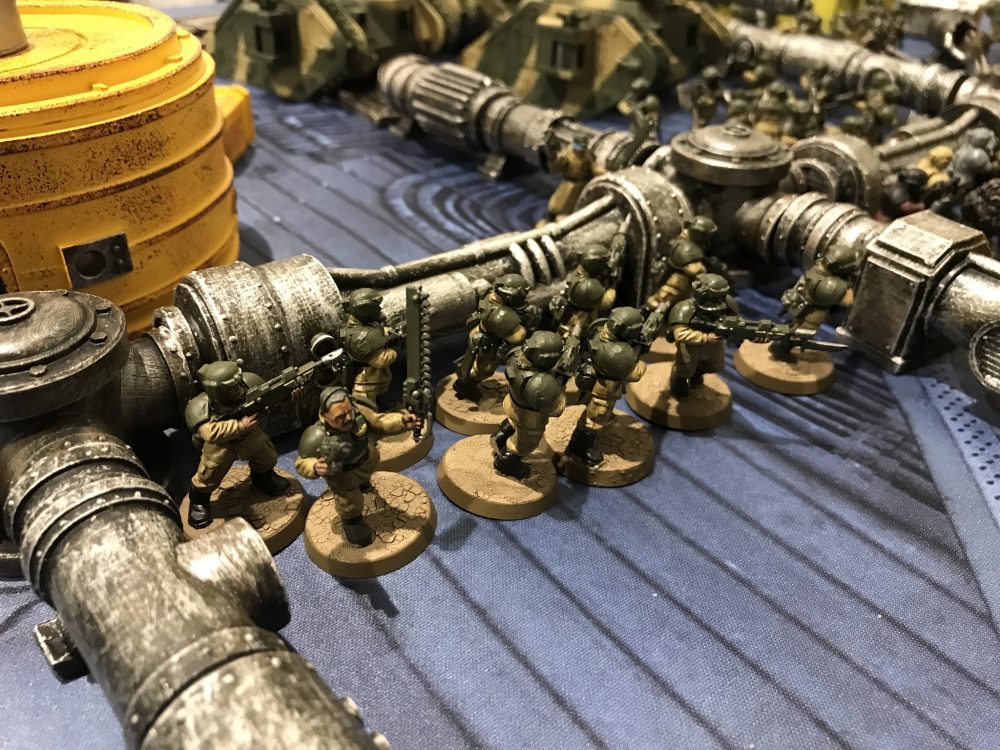 Pask used Jury Rigging to gain a wound. But he was still a wound off being able to hit on a 4+.

After shooting every Leman Russ at the Hemlock Wraithfighter, it was on three wounds. Not dead. The mortars and Guardsmen had no good targets too because no infantry was yet on the battlefield. So they too tried to down the flyer but failed.

I had managed to score an objective card or two, however.

Aiming for the Hemlock Wraithfighter was a mistake. More on this later. Another mistake was having Pask so accessible to Eldar shooting. Pask’s range was good; having a Battle Cannon and a Lascannon. So he could’ve been right at the back of my deployment zone and still manage to reach the whole board length. If he was further back then maybe he’d have taken less damage early on. Hard to say at the moment because I don’t know the ranges of all the Eldar guns. 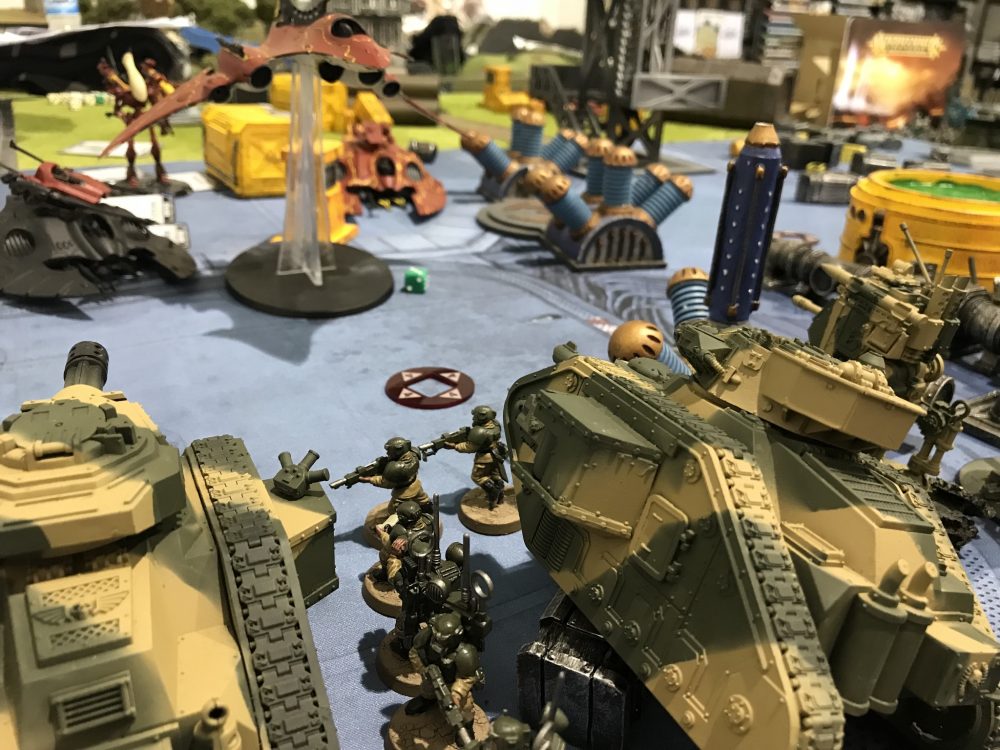 The Hemlock in my sights – Aeldari vs Astra Militarum

One Wave Serpent charged my Leman Russ Punisher to deny me shooting for a turn. Smart Aeldari.

The Wraithlord, after failing to kill my brave Guardsmen squad, charged them and failed again to finish the last four off. They kept the objective! 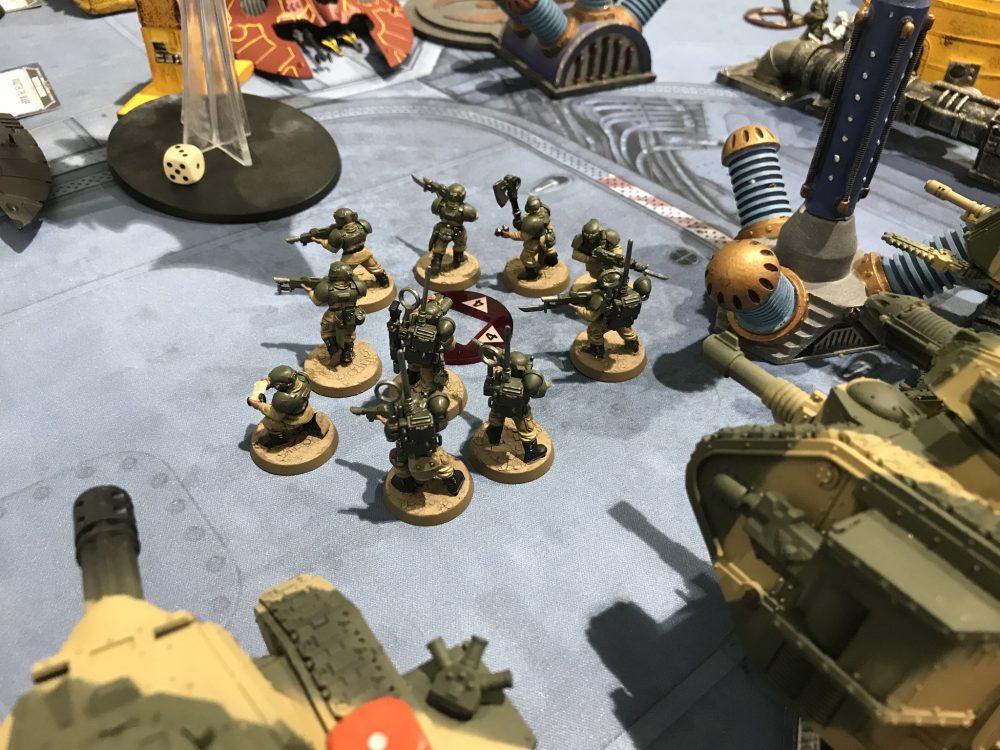 While the Aeldari were not doing much killing, they were doing a good job of moving about the battlefield to gain objectives.

The forces of the Astra Militarum pushes up to take objectives and secure VPs. 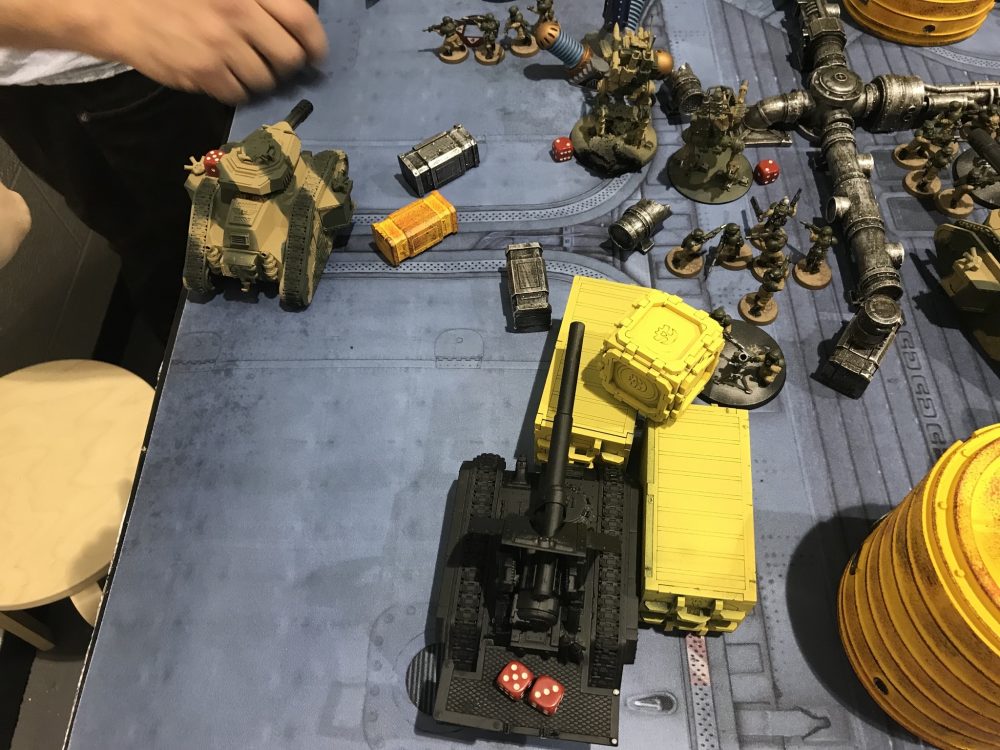 Blast from the Hemlock causing wounds on 2 Sentinels, Basilisk and a RussGuardsmen holding their objective – Aeldari vs Astra Militarum

With infantry now available as targets in the battlefield my Guardsmen started to receive orders from a newly positioned Company Commander. Guardian Defenders began to die but neither squad was wiped out.

The Aeldari continued to zip around the battlefield to gain objectives.

The newloy positived Company Commander was vaporised by incoming small arms fire the Guardian Defenders. I’d moved my Warlord into a position whereby the enemy could sneak in a snipe him. Shame on me. The enemy got Warlord kill and also achieved Kingslayer for 3 VPs. Plus Slay the Warlord for another VP. 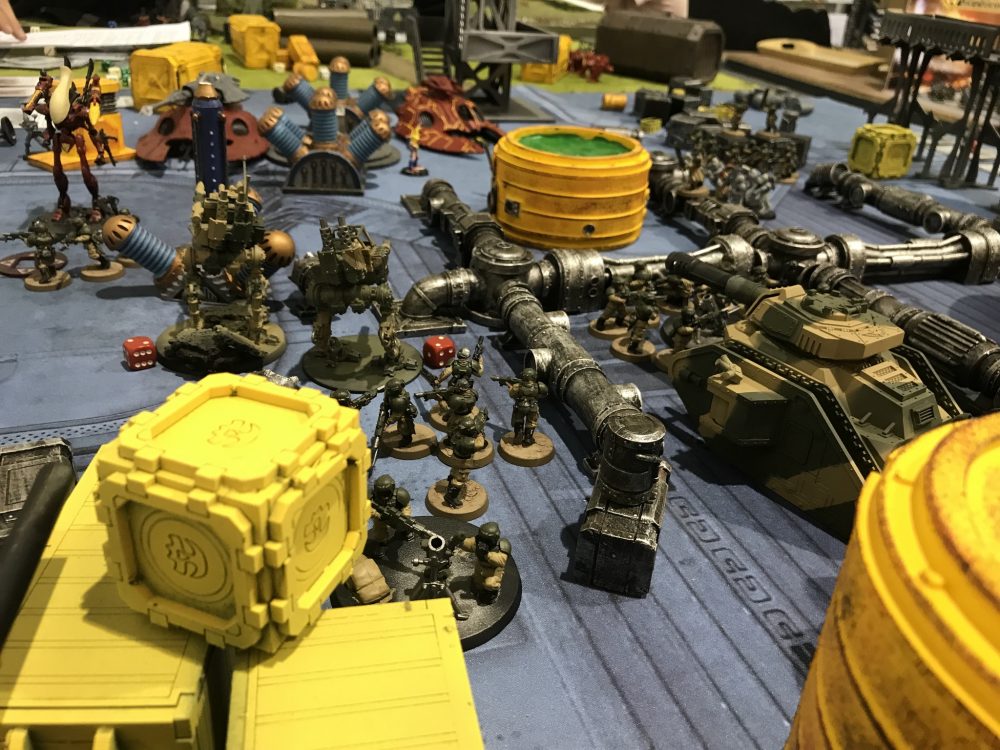 By this point, the Aeldari has raced ahead on VPs. They were on 14 VPs.

We were running out of time and I tried to determine what I could do to salvage a defeat.

But it was too little too late. I couldn’t get close enough to the enemy Warlord to snipe him. I couldn’t get into their deployment zone for Behind Enemy Lines. And I couldn’t achieve any of my cards; 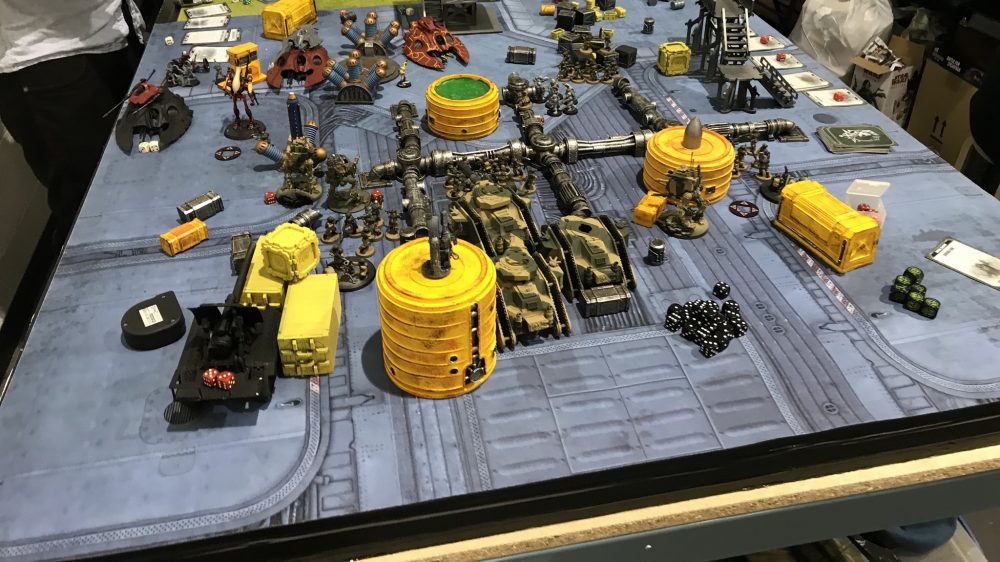 The Wave Serpents were the best unit in this game. Their ability to move over anything and quickly won the Aeldari the battle. They’d disembark troops to secure one objective and then move at full speed to secure a different objective.

I made some poor decisions this battle. Poor positioning of Pask and my Warlord. As well as poor target prioritisation at the start of the battle.

If I’d removed a single Wave Serpent earlier on it would’ve hinders the Aeldari’s ability to capture objectives.

But, another great game!

:-( I am still doing my Heavy Weapon Teams.