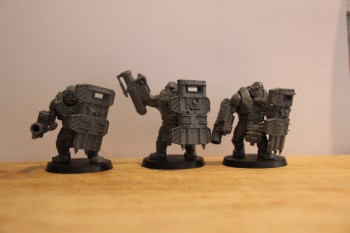 I often bash the introduction of the Tau because its all too convenient, isn’t it? The Warp Storm’s arrival allowing them to be safe and improve their tech enough to be a force to be reckoned with. I do like the myths surrounding their existence such as they’re the Emperor’s own secret creation – possibly gone wrong? But I do imagine its very hard to introduce a new faction into the 40K galaxy when its so entrenched into our minds, games and stacks of literature. You need that little convenient something to make it possible.

So how hard would it be to think up a new faction and place it into the 40K galaxy? Have you ever tried? What do you think of the Tau’s introduction?

I thought I would give it a go but when I tried to think it through I soon realised that it is very hard to do well without a convenient event that simply allows everything to slip into place and make sense.

Instead I have placed my thoughts here about the possible ways you could introduce a new faction into 40k. Comments, thoughts, suggestions, critique all welcome! How would you do it if the new CEO of Games Workshop asked you?!

Possibilities for adding a new faction into 40K

I’ve seen this idea recently somewhere, I forget where. An apocalyptic event that destroys huge swathes of the galaxy allows an existing race, sub-race or abhumans, such as Squats or Orgyns, to rise up out of the ashes while the rest of the galaxy is scrambling to stay alive and hold the few remaining worlds they have a foothold on.

Warp Rifts are common occurrences already allowing the darkness of Chaos to flow freely into reality, but they’d make a jolly good excuse for introducing a new faction as it could essentially provide a blank slate for anything new to enter the 40K galaxy. They could come from anywhere; another dimension, somewhere far off from Man’s explored space or perhaps a new darkness enters our realm to create the “Dark Tau” or “Chaos Tau”!

This sort of stems from the Emperor creating the Tau for some secret purpose or Chaos Space Marines spawning from the existing Space Marine Forces. The best way to think of this is “Terminator Style” (the film, not Space Hulk), experimental or engineered machines rise up to take on the galaxy for their own twisted cause.

This is perhaps the easiest to introduce because if the race always existed then very little of 40K’s history needs to be fiddled with to make it fit. It does seem like cheating and also the most likely to be implemented by Games Workshop.

What is the Role of Digital in a Game of 40K