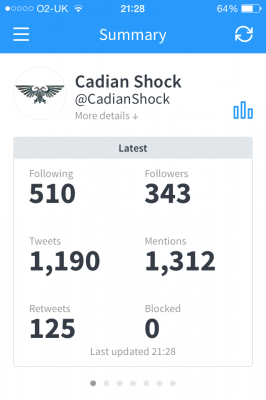 I thought it would be fun (and annoying for everyone else, therefore even more fun) to live every Facebook post and Tweet  in the 40k universe. So no pictures of dogs and beer and  no hobby chat! I am not sure which one is more devastating.

I have logged my current Twitter and Facebook stats so I can track the great exodus! Perhaps this exercise could be called Race to Zero Followers.

Tweeting inside of 40k

It turns out this is really fun and hard work. I didn’t manage it for very long because it becomes impossible to reply to anyone or comment on anything without sounding crackers. Every Tweet and Facebook post makes me think, its fun though trying to think inside of the 40K universe all the time. It also gives me a little insight into what it might be like to live under a repressive regime, as I was constantly trying to praise and make reference to the Emperor. May his soul forever watch over The Imperium. See what I did there?

Where this was really good was during a game of Tau vs Guard, it all added to the story and background I’d already started around the Grimoire of True Names. It was fun having comments come in from Twitter; as if the other planets of Man were rising up, their Psyker’s voices calling out to aid their brothers in arms – but only in 140 characters because its a little known fact that all but the best Psykers operate in 140 character bursts. Any more they suffer Perils of the Warp, fact.

I then gave up because after the game and it being so much fun, just doing it for the hell of it was boring. So in character Tweeting during games of 40k is here to stay!