I’ve been using Twitter for hobby related content since March 2014, that’s 6 months at the time of writing. It’s been a great resource for connecting with new people, asking questions and being inspired. It’s also been handy to get detailed feedback on specific ideas, game questions and hobby problems. The Twitter community I find to be very friendly, forgiving and accepting. If you’re new to the hobby or new to showcasing your hobby online then you need to be on Twitter. It’s nothing like forums and it’s nothing like Facebook.

Once you have your decided on a name for your online exploits (see my last post) head over to Twitter and sign up. They’ll want an image for your profile although it’s not required. Take a quick snap of your best mini perhaps and use that? They also make you jump through other hoops like following at least ten other users. Just pick ten and move on – you can unfollow them later on.

Once your profile is set up, you have an image and a Bio you can start gaining followers and getting involved.

Twitter adds interaction in the form of retweets, mentions, favourites, direct messages and much more. I’ll cover these later but remember Twitter isn’t a list of stuff you just click on. It’s a list of stuff to be read, shared and engaged with.

If you take one thing away from this post it must be this, the #warmongers hash tag is your friend. A hash tag is a way of tagging or categorising tweets, without them Twitter would be an endless stream of unrelated nonsense. You don’t need to use them but once I’ve explained later how you can use them you will see why they can be a powerful tool for growth.

#warmongers should be used for hobby related posts only, it’s automatically retweeted by the Warmongerin’ Bot and by many others. It’s a simple way of seeing hobby related content only and filtering out the football updates on a Sunday. 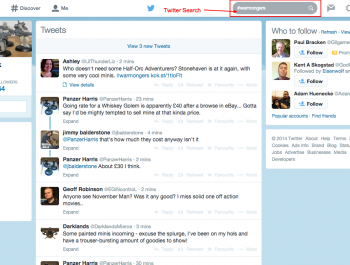 Other hobby related hash tags include;

At this point it is worth mentioning that hash tags can be used within your Twitter Bio too. This will allow others to find your profile by hash tag rather than just by your tweets that contain tags.

Before we start, please stop and think again. I said it in my last social media post and you should always keep it in mind – why am I doing this? Do not lose sight of this, to do so could be a disaster. At every point of your journey always keep this in mind. Its never about the graphs, likes, retweets, stats or numbers. 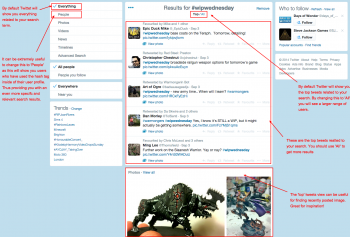 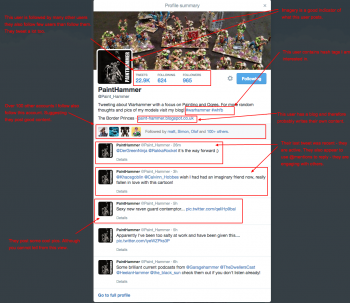 By simply tweeting your best content right away and waiting you’re unlikely to get noticed. But before embarking on this next section ensure you’ve tweeted a few times about hobby stuff; perhaps an image or two, a link to a blog article or ask that burning question about 40K’s rules –  you will see why soon.

You should start by identifying like minded Twitter users who share the same interests. One way of doing this is by using Twitter’s search facility, but who do you search for! You use the hash tags!

By searching for hash tags you can find hobby related users quickly and follow them. Try making up your own hash tags too to find more specific users such as #tau, #imperialguard or #malifaux. Now you can hopefully start to see why tagging your tweets (and Twitter Bio) is good, it allows others to find you. You’ve now entered the #warmongers community by posting hobby related content using the correct hash tags and by following other #warmongers users.

The right hand graphics show exactly how you might go about using Twitter to find and validate such users.

When you follow a user that user will get an alert, as long as they have not turned it off, they now know about you and so are more likely to check you out. Just like you have used the Twitter search to find people, check them out and follow them, others will do the same to you. When another user is alerted they might view your profile, they won’t want to see random updates or an empty feed, they want to see hobby! So those first few relevant tweets you made earlier will now be viewed by those people you followed.

By posting good content, using tags and following other relevant users you can hope to get noticed for the right reasons and followed back. By using these methods it is relatively easy to build up a 100 followers in a week. I use the iOS App Tweetbot which lets me save searches for later, this way I can quickly check out specific searches and find new users to interact with and follow.

Everything I talk about here should be done in moderation. Post a bit of content on Twitter, follow some users, watch and wait. Who follows you back, is it everyone, nobody, users with less than 200 followers or completely new users who you didn’t even follow in the first place? Do you get retweets or favourites? If so, for what, images, questions or links. By doing things in little bits you can see what works and what does not. Then go and do it again a few days later and do the things that worked again and drop the things that didn’t work.

These two interactions are both great, but for two different reasons. Retweets (also known as RTs)  take an existing tweet and re-publish it again under your account – its a way of saying “I saw this and here it is again for everyone that follows me”. Favourites do not further share a tweet but are a way of letting the tweet’s owner know that you approve, it alerts them too.

Retweets are a great way of sharing other people’s content that you approve of. By doing this you are expanding the reach of that tweet. Rather than it reaching just the followers of the original user its now been (re)tweeted to all your followers too. The potential audience has grown. Granted, some of our followers will be the same but you get the idea. This is why using the #warmongers hash tag is important in hobby related tweets because the Warmongerin’ Bot retweets all tweets that contain the #warmongers hash tag to its 380+ followers! Again use this is in moderation if you spam this hash tag then most of those 380 users are going to block you and that is very hard to come back from.

Marking a tweet as a favourite lets the owner know that you approve, it also adds that tweet to your favourites list. The real power here is getting on other user’s radar. When following new people its a good idea to favourite some of their tweets you like, don’t just do it randomly. I usually do this a few days after the initial follow once the chances of that first interaction has worn off. Marking a tweet as a favourite will let them know you approve, that you are checking out their content and that you exist! Again this gets you noticed, brings them to you and hopefully gets you a new follower.

Both of these methods can be used like this, to get on people’s radars by sharing their content. Again this needs to be done in moderation, retweeting and favouriting constantly is spammy and comes across as desperate! Take it slow, watch, wait, test and measure. Observe what works and what doesn’t.

Mentions (sometimes known as “at mentions” or “@mentions”) allow you to publicly message another user on Twitter. These are not really used for getting yourself out there and noticed as its similar to walking up to a stranger, stopping them by waving your arms in the air and demanding they pay attention to you. Instead @mentions are used to chat, discus and debate, and I know you want to do that because you are into this hobby! Who doesn’t love discussing the latest codex, data-slate or Games Workshop’s financial situation! 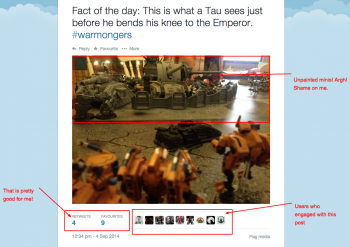 All of the above will give you a good start, perhaps you already do it all, but it won’t sustain you forever. As you reach a certain level of followers things will plateau and it will become harder and harder to gain new followers. Content is King on the net, if you produce good content people will come to you. No amount of retweeting, favouriting or begging can make up for good content. After all, you have followed those new people based on their recent tweets, that is their content, so you should aspire to do the same – create content that others want to see, share and talk to you about.

With that in mind ensure you create content, don’t get bogged down in getting hits, followers or retweets just to make the graphs go up. Continue to hobby, build, paint and play this is what people want to see. If you stop doing those things then something has gone horribly wrong.

Gaining influential followers is really useful, the more followers someone has the more influence they have, a retweet by a user with 1,000 followers is much better than a retweet by a user with 20 followers. You will get followers with, 2,000 or 100,000 followers and that feeling of “I have made it” washes over you. Someone with that influence could launch your account skywards, easily! Sometimes things seem to good to be true. These people follow you to solely get a follow back from you, if you look at these accounts you will see they have 100,000 followers and follower 120,000 users themselves. If they follow 120,000 people how on earth can they engage meaningfully with those users and share good content – answer, they can’t.

They have followed so many people to get them to follow them back. Their audience is huge but they exist only to push their own content, they have no “fans” and have no community. All their followers are exactly the same. These users are not worth following I find and will simply clog your feed up with rubbish and none hobby related nonsense. Leave them be and within 2 or 3 days they will unfollow you and move on to their next victim.

Success, recognition and respect will not come over night. You’ll settle into doing the above actions and continue to hobby as normal. It’s very exciting to begin with and it’s easy to get carried away with following everyone you can find. But take the time to think about what you are doing and why, this will ground you and help you create and share the right content.

That is all for now, next time we have advice on posting to Twitter!