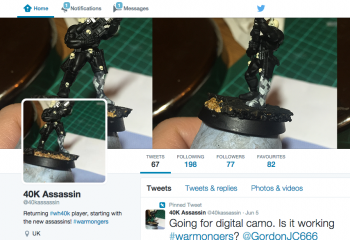 So I just wanted to write a little piece about following back. In the past I’ve said No, do not follow to follow back.

But I’ve realised there are two types of following back. In my opinion the good type and the bad type. My main point here is to keep the people you follow relevant. There is also another type of following strategy which I will go into later – its one I think we should steer clear of as players of a social hobby.

Lets kick off with an example. I’ll pick up a new follower and I’ll check out their profile; 1 year old account, 400 followers, following 570, tweets 1,200 and their content is hobby related – so I follow them back. They have relevant and good content. Plus they tweet about 3 times a day judging by their start date and total tweets. They will probably be saying something of worth related to hobby so following back seems like a sound idea. I am also more likely to keep them as a follower. Its all goood.

On other days I’d get a similar person follow me, same stats and content lets say. I’d forget to check them out and I’d leave them alone. A couple of days later they would unfollow me so I’d then check out their profile at this point and I’d follow them. Then they’d reappear as a follower. That has essentially turned into a follow for a follow back. They followed me, I didn’t do the same so they un-followed me. Only once I followed them did they follow me back. This is OK, I think, we are both hobby related still and will both get something out of our future interactions.

The bad type goes like this; I get a new follower and check out their profile. 18 month old account, 1,760 followers, 1867 following and 12,068 tweets. Their bio info says they are an SEO specialist from Utah. I live in Derbyshire, England by the way. Their follower and following counts are too similar, their content isn’t relevant and won’t ever be. They tweet 21 times a day too. 21 tweets per day of irrelevant stuff, no thanks! I guarantee that following this person would mean they wouldn’t unfollow me. But their a meaningless follower to have and would bring nothing of worth my way. This is the bad type of follow back, just ignore them and they’ll disappear.

Twitter, as well as the various apps that support it, have a Mute button which, er, mutes users. It effectively allows you to follow someone, but then mute their content from your feed. Its a nice trick to gain followers through follow backs without bloating your feed with nonsense.

But why? Please ask yourself why would anyone do this. There a couple of really obvious issues with this approach;

Of course the up shot is that you can follow anyone, mute them and then hope for a follow back. If they do, great, you have lost nothing as your feed will be unaffected. If they don’t then so what, onto the next person… it just doesn’t seem right?

It could be argued that not following anyone, or as a fewer people as possible comes across as good, as professional or as a huge influencer in the hobby Twittersphere. Why? Because your content is that good that people flock to you, you have no need to gain followers by following them. You’re that good that people have to see what you’re doing and will find you due to your popularity without the need to raise awareness of following people back.

I do not like this stance. We play a social hobby, we play with people, we interact with people and the other people make this hobby and what #warmongers has to offer awesome. Taking this stance feels like you’re saying;

Come here and look at my stuff, but I do not want to see your stuff, you’re not important enough

Even if you’re not saying that it may come across like that. Even the big players follow people! BoLS follow over 4,000, Beasts of War 2,600 and even Games Workshop stores are getting in on the act by following 1,100! Miniwargaming, you disappoint me. You will have people in your shop to play in your videos and showcase their minis but won’t engage with a large community on Twitter – smells Elitist. I still love you guys though.

I am not saying that following a few people back is a certain no-no. It just doesn’t sit well with me, its a social hobby that we enjoy together.