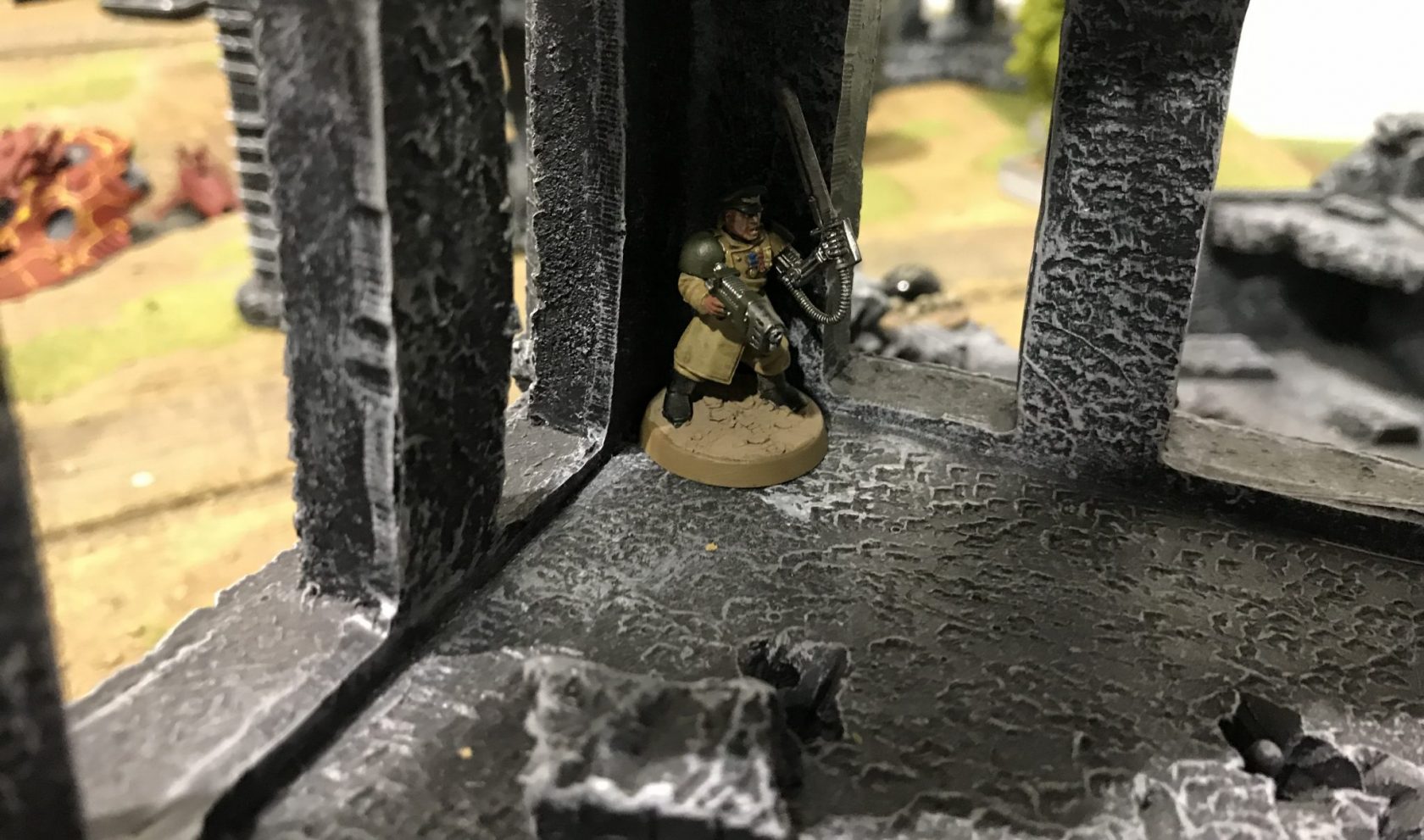 This article has been a long time in the making about 40K blogging. Possibly a year of having it floating about in the back of my mind. But now it is here and completed. I have dug into the top 4 forms to see how they are performing and also take a look at how Games Workshop has been doing.

It has to be said that Games Workshop seems to be killing it at the moment in 40K. Perhaps you’re still waiting on your army’s Codex or some new models for a certain army – which is frustrating, but on the whole, for 40K they are doing a lot of things right.

While not 40K specific, Necromunda is back. Kill Team is here and is here to stay it seems. It is being supported in the form of new models, new rules and new terrain – Rogue Trader for example. And Games Workshop has given us 40K rules for the Rogue Trader models which is pretty cool.

They also have the new School Club system. The swag that has been appearing from this set up is great and is sure to bring new faces into 40K.

Then there was the whole tournament debacle which they got in on. Which was pretty amazing too!

And then there is the Warhammer Community website. While the word community is a loose term for it – there are no comments or discussions taking place on that site at the moment. It is the start of a community because it has guest articles and is supporting other tournaments, events and groups that are not directly controlled by Games Workshop. So yes it’s a community of sorts.

That aside, Games Workshop are owning their brand, their content and their releases on that site. This is a fantastic thing and it’s not too little too late. Games Workshop has transformed themselves in a year or so into a modern social media embracing company.

They now have a team of social media wizards that run their Facebook page and their Warhammer Community website – and it shows.

Ask a serious question on their Facebook page? Maybe get a serious answer or a silly answer. Ask a silly question? Get a silly answer. The point is that you’ll probably get an answer via that platform from them. This is a big leap for Games Workshop and it’s a lot better than it used to be even as short a time ago as 7th Edition.

Where does this leave the rest of us?

Forums have been around for nearly as long as the internet. They are to some extent the original social media platform – allowing complete strangers to talk about a shared passion from anywhere in the world.

Where does that leave them now? To answer that question I wrote some code that downloaded (many) pages from the four top 40K forums to determine how many new topics were bearing created per month over their entire lifetimes.

The graphs show the number of new threads/topics created per month under a given category. All are declining.

The categories I looked at varied across the forum because each one has slightly different categories for 40K. But I chose the most popular 40K ategory from each.

Historical data was patchy, but that is OK. It has had some massive peaks in the past possible around 40 releases or major shake-ups. But new posts seem to be almost none existent. The data stops at September 2018 because that is when I ran the code last. But I just checked and there have been just 2 new posts on Warseer in October in the 40K Tactics section. 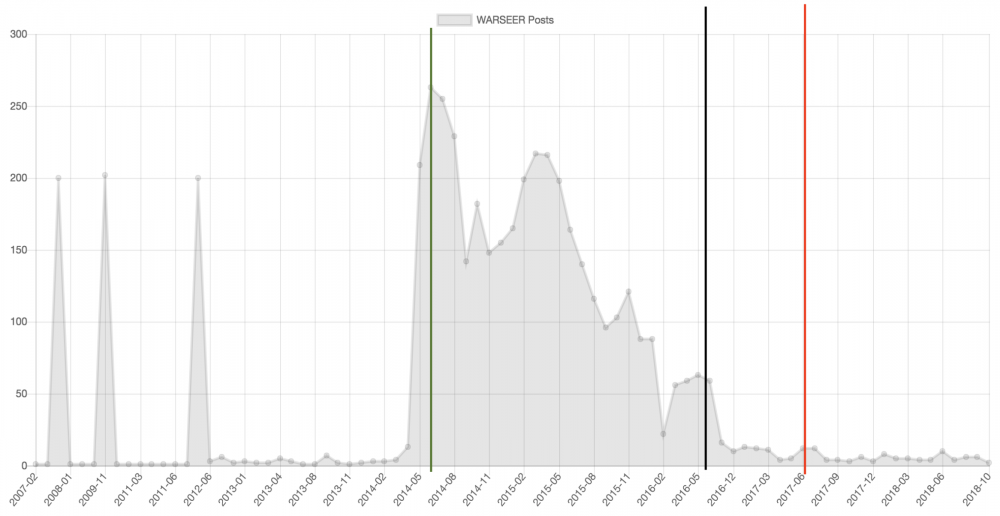 Bolter & Chainsword fair a little better as they have continuous updates to the WIP 40K topics. They have still seen a decline and are seeing about an 80% fall in posts since 2010. 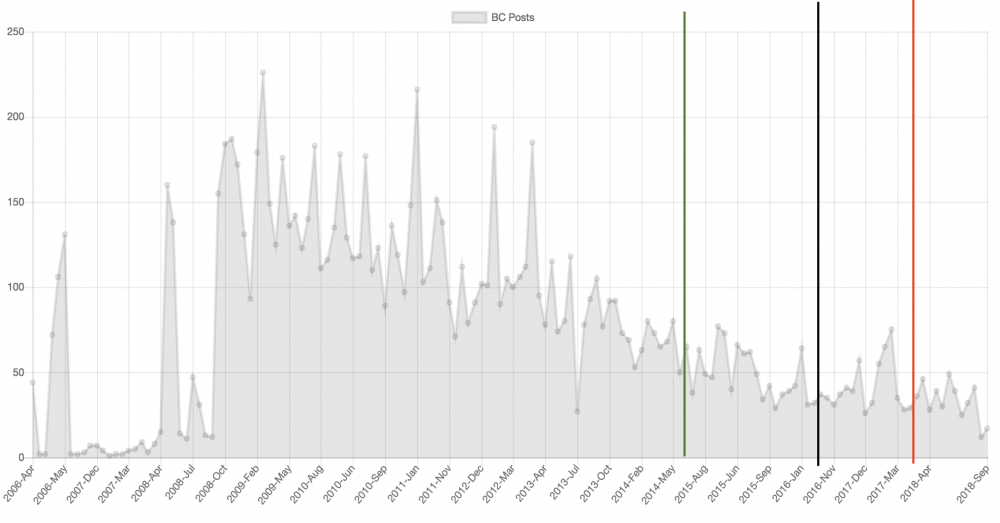 Very similar to Warseer here for the BoLS Lounge. With just one new post in October in the 40K General Discussion category. It has had some success over the last 5 or 6 years but the forum seems to have been in decline for many years now. 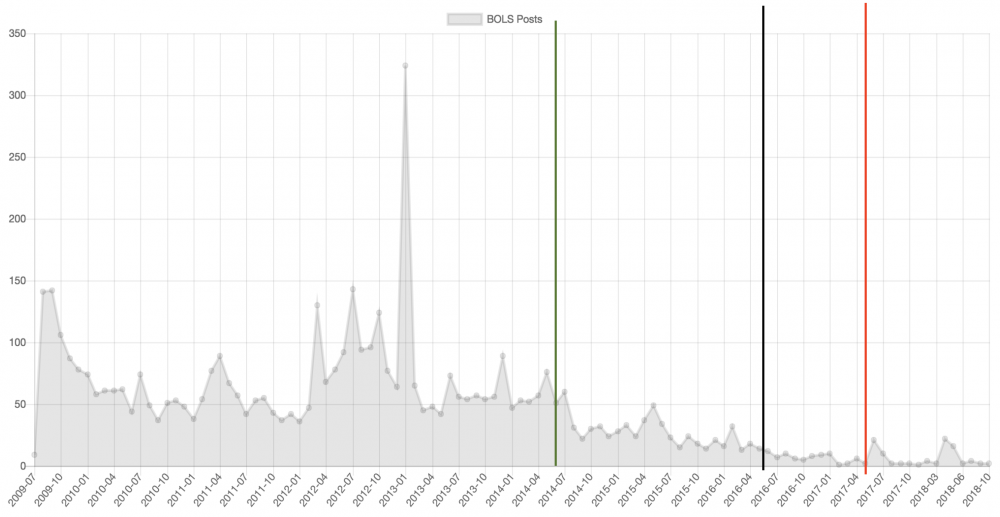 Dakka seems to be the healthiest of the lot. But again they have seen an 80% or so drop in posts in the Army List section since 2013. With new Codexes still being released, I would expect this section to be hot. 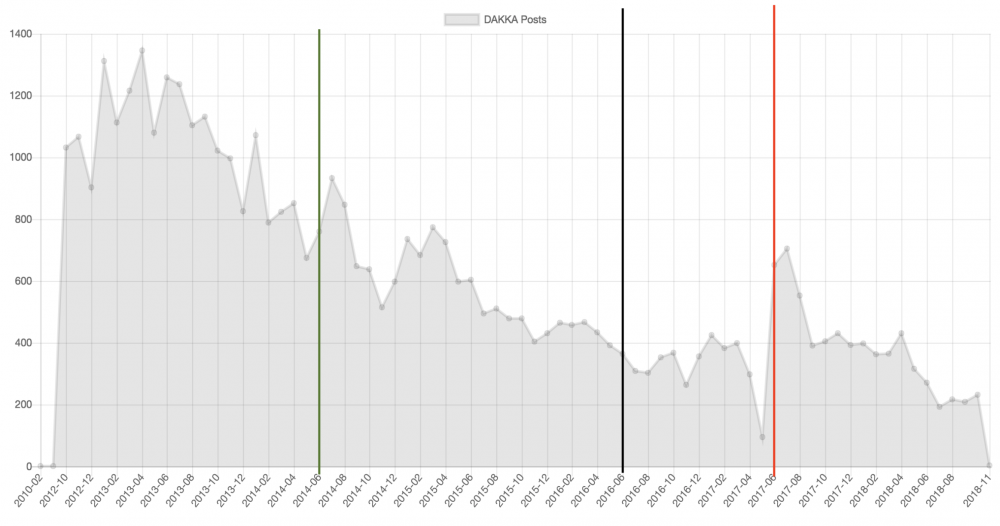 I’m not sure what to say about these findings. I suspected this outcome but perhaps to not such an extreme extent. It seems that people are going elsewhere to share their experiences these days.

Perhaps it’s an age thing. These forums are old – decades old in some cases. I don’t imagine any 14-year-old gamers have used a forum or ever will. As new players come into the hobby they share their hobby using newer platforms? Is there much 40K on Snapchat? I wouldn’t know – I’m 33!

As Warhammer Community rises up and gives us all the release news we want and need – where does this leave other sites such as Bell of Lost Souls and Natfka?

Well, I don’t know because I don’t run one of those sites. But those sites used to be run on rumours and controversy. The former is now nearly none existent because Games Workshop has taken control of their own release news and rumours. There is the odd rumour but they no longer gain as much traction as before because you can get the whole truth from Games Workshop.

The latter will always be present but is now less effective because there are nearly no rumours.

BoLS seems to have transformed slightly and now creates content that is easily shared via social media. And content that creates a discussion and a reach on their social media accounts or comments section on their website. The point is that it works and gets traffic – otherwise, why do it? Bell of Lost Souls (and others) need to adapt to Games Workshop’s new approach to social media.

It will be interesting to see where Games Workshop takes us over the next 12 to 18 months and what changes will they make that have an impact on 40K online.

BoLS and Games Workshop now have a Call and Response approach to social media. They say something and then gain traffic from the response and discussion that takes places on their platforms or social media accounts. Forums have probably never done this, they are Discuss Amongst Yourselves platforms. And this type of discussion has moved away from forums to other social media platforms.

What about my Blog?

I continue to see growth in all areas. From social media, from search results, from links and from Reddit. The blog is now four and a half years old. If the current levels of traffic continue then 2018 is set to get more traffic than all the previous years combined. Which is pretty amazing, to be honest. That is no stroke of luck either.

I try and ensure I have an angle on each article I write. That might be a specific set of keywords I am targetting for SEO or perhaps I want to ensure that the article is shared by a specific Facebook user/page or Twitter account.

I get asked from time to time;

Why not do a Podcast?

Good questions indeed. The main reason is probably to do with effort. I can’t do a Podcast or a YouTube channel sat on the sofa using my phone. I can easily write a blog article though just about anywhere. Maybe one day I will diversify into another medium – but not yet.

This is how I feel about 40K blogging and the general landscape of Warhammer 40,000 on social media.