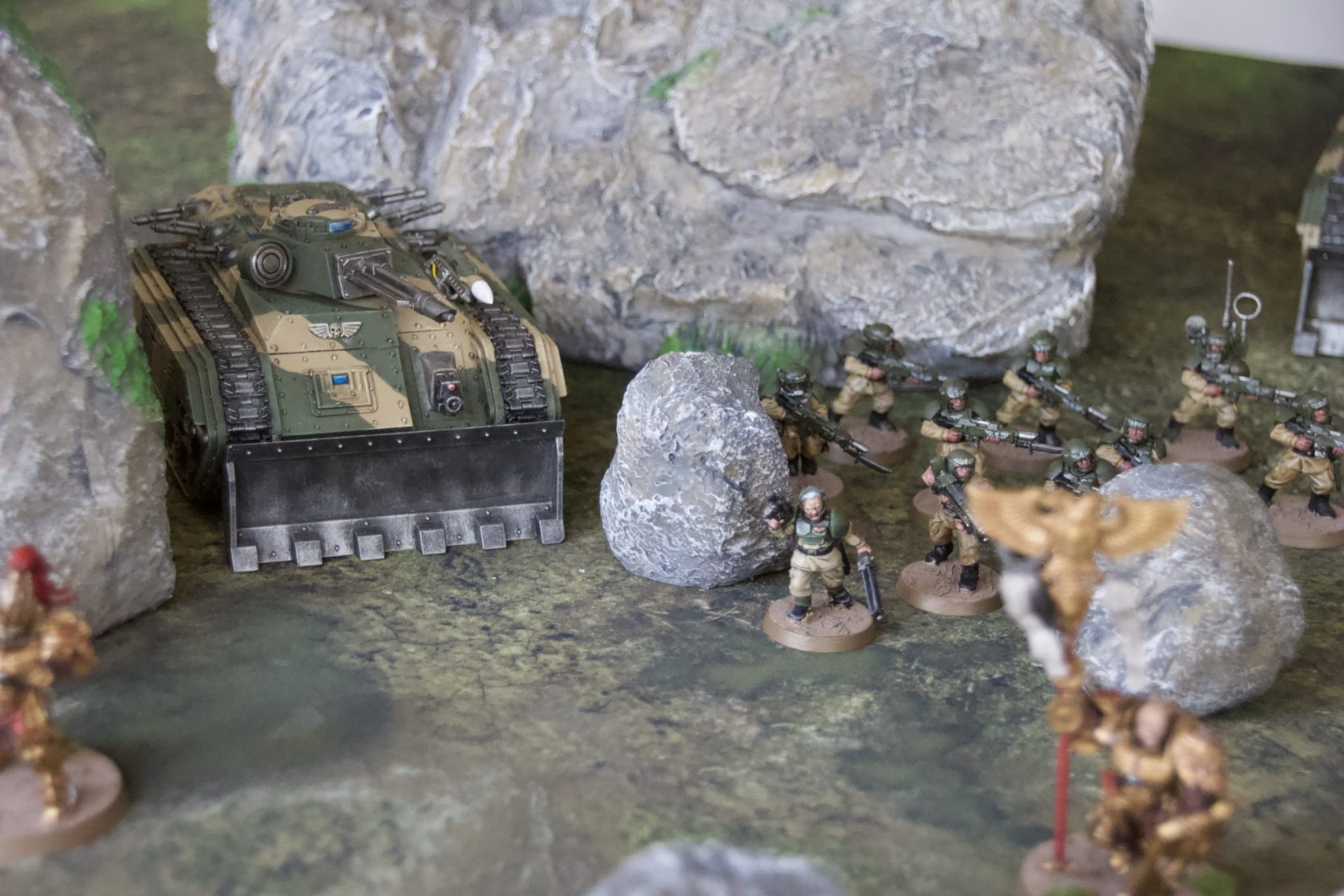 Your one stop shop for an Astra Militarum Glossary...

If you think I got something wrong or missed an important term then please get in touch via; Facebook, Twitter, Reddit or email me at trooper@ the domain of this blog.

The act of creating a list of units and their upgrades to play a game of Warhammer 40,000 with. This can be done on paper or with an app such as BattleScribe or on the Official Warhammer 40,000 App.

Battlescribe is free, it takes a bit of setting up as it contains no army data, you have to link to a data source online.

The Warhammer 40,000 App is free to download but requires a subscription.

Mankind’s main fighting force in Warhammer 40,000. Billions of people are drafted into the Asta Militarum each day, yes billions.

Each model, weapon, monster, vehicle, etc in Warhammer 40,000 has a points value. In Matched Play, you and your opponent set a points limit and you both Build a List up to, but not over, that points limit.

The points values are contained within each army’s Codex.

Each unit is assigned a Power Level. The Power Level for a unit is the same if they take loads of extra weapons and gear or if they take no extras. This simplifies the List Building process as you do not need to add up every single model and weapon’s Points value.

Matched Play aims to give both sides an equal chance of victory. It does its best to make the two sides equal.

Narrative Play puts more emphasis on telling a story than the other two methods.

Open Play is easy to start, you need no prior planning and you can just throw models onto the table and play.

Each army has its own Codex, it is a psychical book, which contains all the rules and stats for that army. This is the Astra Militarum Codex.

A Codex does not contain the core Warhammer 40,000 rules. It only contained the rules and datasheets for the units for that faction/army.

Each Codex comes with a unique reference number inside of it, this can be used to unlock the Codex on the Official Warhammer 40,000 App.

This is the card style visual that Games Workshop creates for each unit. This is the Datasheet for Severina Raine freely available from the Warhammer Community Downloads page.

The 40K Balance Dataslate was a specific Datasheet released by Games Workshop in November of 2020 to help address some issues the game was having. It can be used in any of the three types of play but is most certainly used in Matched Play the most to try and balance the game.

It contains a few key buffs to the Astra Militarum and you should definitely check it out!

Orders a specific ability for the Astra Militarum, no other force can use orders. Orders are given out by Creed, Platoon and Company Commanders.

Tank Orders are like Orders but are given to Leman Russ Tanks by Pask and Tank Commanders.

The 40K Balance Dataslate however changed Tank Orders so they could be given to any Vehicle of the same Regiment, which was not Titanic.

These are extra pieces of war gear that Characters can take. Each force gets one for free. You can take more by spending Command Points and using your forces specific Stratagem that allows you to take more Relics. It’s usually one extra Relic for 1CP or 2 extra Relics for 3CP.

Each Relic can only be taken once – they are unique pieces of war gear.

They sometimes replace a weapon. They often also give the Character a new special ability. E.g. allow an officer to issue an additional order to a unit, The Laurels of Command.

I forget exactly where this is written, it might be in an FAQ or in the Basic Rulebook.

But, the Rule of Three is used in Matched Play and it means that you cannot take more than three of any one Datasheet.

The Rule of Three does not apply to Troop choices or Dedicated Transport choices.

The Warhammer 40,000 Basic Rulebook contains several missions. Many are specific to Matched Play. The Missions tell you and your opponent how to set up the battlefield, special rules for the mission and the victory conditions for the battle. They are good and are a welcome change to KILL EACH OTHER!

Seasons are a new concept as of December 2021.

Each Season lasts 6 months, the first being War Zone Nachmund, and each Season will have Chapter Approved books.

Chapter Approved is two additional books that are optional. They are not specific to the Astra Militarum, it’s for the whole of Warhammer 40,000. It’s meant to fix a few rules and abilities that get abused, clarify some grey areas and add new rules where there were none before. It gets used in tournaments and by a lot of regular players too.

The two books in Chapter Approved are called Grand Tournament and Munitorum Field Manual. They contain extra Missions and more recently they have also started to update and change the Secondary and Primary Objectives used in those missions – all in the name of balance.

The Munitorum Field Manual contains all point costs for units in 9th Edition, to help balance the game. These points are also updated BattleScribe and the Official Warhammer 40,000 App.

An extra ability that an army can use before or during a battle. Stratagems cost Command Points.

Each unit has a Battlefield Role. These are;

A Detachment is a group of units. Each Detachment requires a minimum number of units from a specific Battlefield Role to be valid.

They also have a maximum too for each Battlefield Role.

For example, a Patrol Detachment requires;

They are also spent on extra Detachments.

The commanders of an army used to buff and improve your other units like a Lord Commissar.

Tanks or Artillery that dish out a lot of damage, such as the Leman Russ or Basilisk.

The staple of a lot of forces, cheap and numerous – Guardsmen.

Specialised troops that are often tough and/or have the ability to crush the enemy with firepower, like the trusty Bullgryns.

Quick units that usually do a very specific task very well, like the Sentinel.

Units used to transport other units around the battlefield, such as a Chimera or a Taurox. These are limited to the number of other units. E.g. you can’t take a 4 Chimeras if you only have 2 other units in your force.

Flying war machines such as the Valkyrie or Vulture.

Massive war machines such as Baneblades or Knights.

This is a major part of the hobby for some people. In short, it’s taking two or more models and making them your own. For example this monster Ork Leman Russ by @steve_neilson.

If you want something else covered here, have a question or just want to say hello then please do. You can do so via, Facebook, Instagram, Twitter, Reddit or email me at trooper@ the domain of this blog. 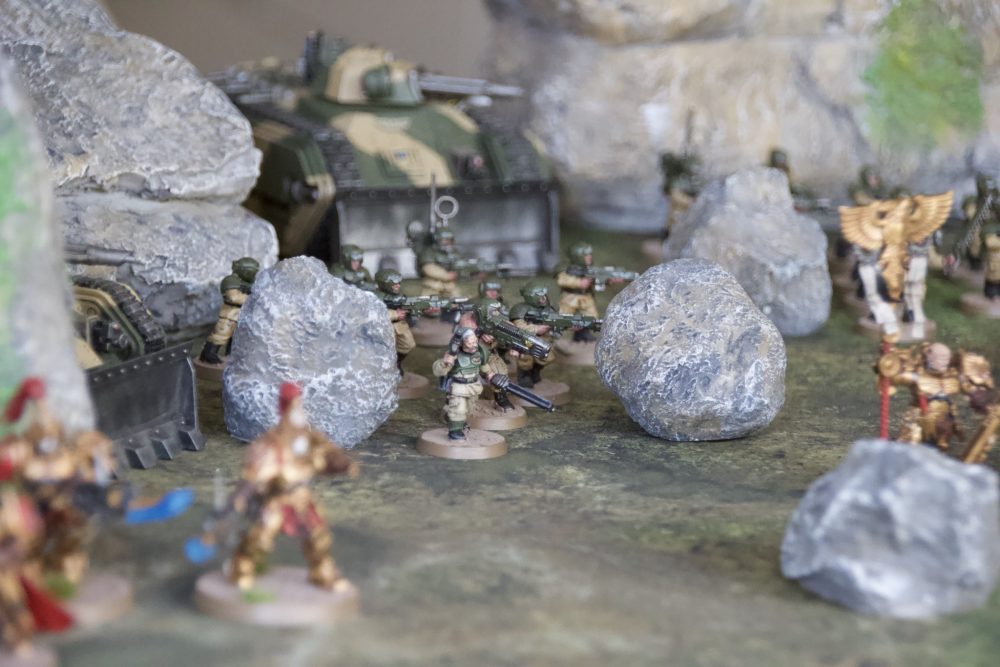