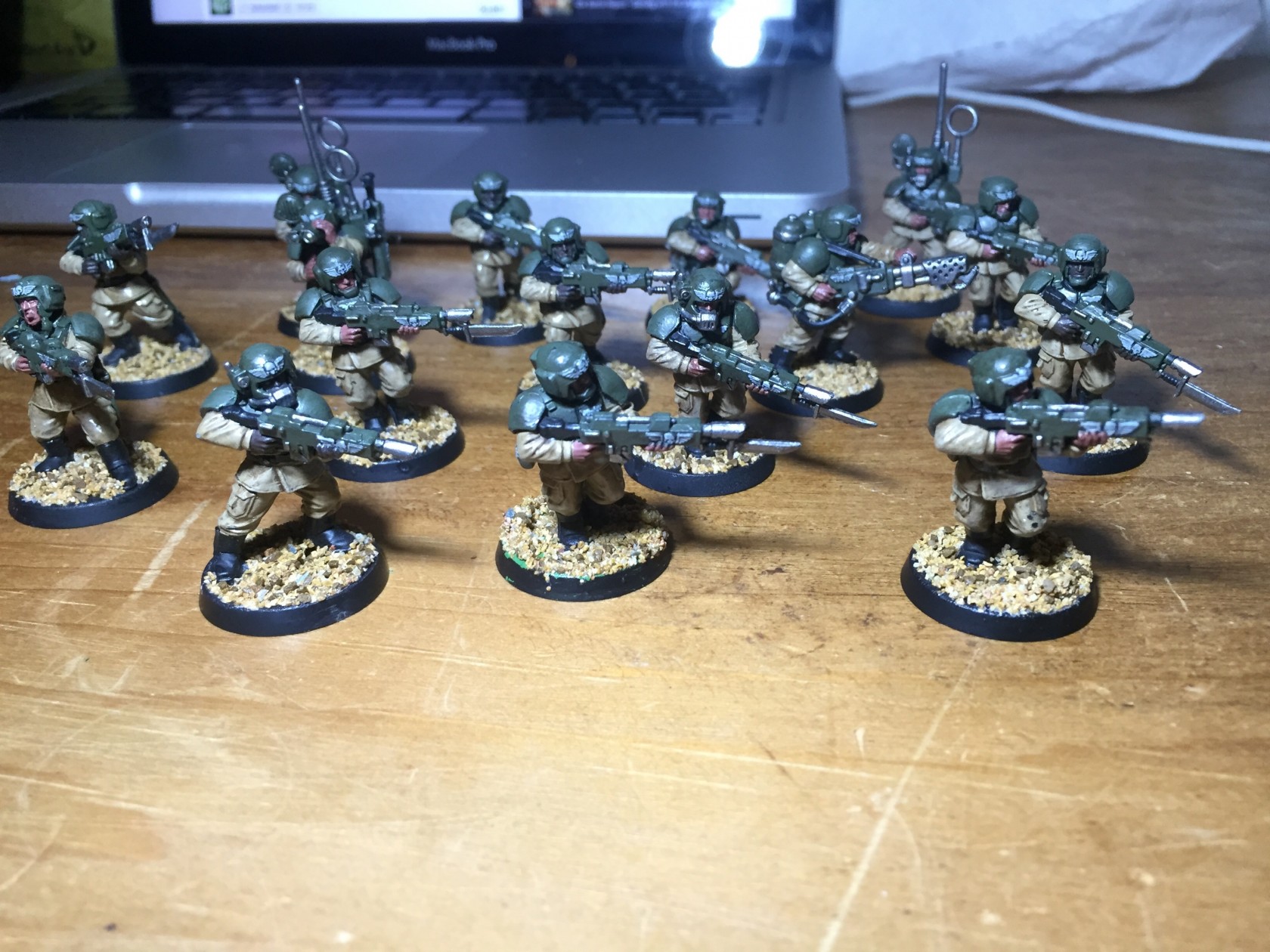 I’ve my second putting ever to my local club tonight. Said trip will involve 1,500 points of slaughter against some fishy 40K Xenos. So here my 1,500 pt Astra Militarum list Vs Tau.

I haven’t used any of the new formations from Mont’Ka, boo. Mainly because the ones I want to use I don’t have the models for and my opponent isn’t a cheesy Tau person plus he’s not played in a while so want to give him a fighting chance. Famous last words right?

Mission type (Maelstrom or Eternal War) is random and therefore unknown this 1,500 pt Astra Militarum List is not tailored to either type.

No anti-flier but I know he doesn’t have one so that’s all gravy.

Pask will be centre stage hitting up whatever comes into range. As my Warlord I don’t want to be getting too aggressive with him.

The Company Command Squad will move as they need to, to dish out orders and put his Warlord Trait to good use. Not sure about this addition to the force, it exists for the orders, but if the Veterans are moving up in Chimeras then there is every possibility that he will be out of the 12″ order range.

The two squads of Veterans in their Chimeras with Pyskers will push forward. Both Psykers will probably run Divination. They’ll take objectives and run interference I hope. Using orders I hope to Split Fire with the Lascannon. The Grenade Launchers should be fairly useful for splatting a few Kroot open with Frag Grenades or a few Battle Suits with Krak Grenades.

The single Demo Charge, Meltaguns with Commissar squad of Veterans will stay in my back line and watch for deep strikers and Farsight. Both are a real possibility. If that doesn’t happen then they may well be wasted and so may resort to objective camping. If need be they can wonder off and go alone with their Commissar keeping them in check and dishing out an order to the squad.

I run this little set up a lot. Two outflanking Sentinels Scouts in reserve with Heavy Flamers. More often than not they come in on a side of the table thats worthwhile. Its rare you’ll get a table edge which doesn’t have a target. But two Heavy Flamers can kill a lot of troops against the Tau. I don’t take Smoke Launchers usually but I thought they might be handy here. Come on from reserve, toast some Tau, endure a turn, pop smoke and survive a turn then finally move on to the next target.

Well Wyverns and a Basilisk – not much to say here. Both will sit in one place and pound the Tau to death from range. No upgrades here.

Finally, I will try and post some sort of report/summary afterwards, mainly for my own learnings. Lets hope for a win.

Update – A quick write up of the fight can now be found on this blog.