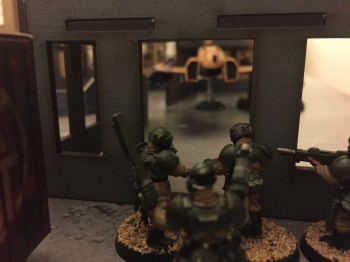 I have a game on Tuesday (in 2 days) against an allied force of Tau and Blood Angels. Why? Reasons are here.

They are putting together 500 points each and so I need a 1,000 point list. Comments very welcome. I have to beat these guys. For The Emperor!

I wanted to go infantry heavy with this list and try and get a lot of models on the table to soak up the pulse and burst fire from the Tau. Those weapons can put down a lot of effective shots that ignore a Guardsman’s armour save, coupled with a marker light or two and my men are dropping on just two rolls of 2+. So getting bodies on the field is important to mitigate that massed fire.

I have in the past taken a Veteran heavy list against Tau with the Grenadiers upgrade to give them a 4+ armour save against the burst and pulse weapons that seem to make up the main stay of the Tau’s armoury. This 4+ save does work but its still only going to be saving half of my Veterans after each Tau volley – extra bodies seems the more effective method. One of my Guardsman squads has a Chimera too.

Massed infantry is doubly important too, I think, because my Tau opponent could be bringing an Ethereal and the Fireblade Firewarrior in an attempt to get four shots from pulse weapons in the shooting phase when rapid firing.

I finally do have a single Veteran squad in a Chimera that I plan on placing in reserve for some objective snatching or general mayhem for when things get a little iffy.

Two heavy weapon teams one with three autocannons and one with three mortars. Say what you want about mortars but I have found them very effective at pinning down Kroot and Firewarriors as well as softening them up for some melee action. The autocannons pack a punch for some anti-vehicle requirements. I plan on coupling those autocannons with the “Bring it Down” order to re-roll failed armour penetration rolls against vehicles.

I know the Blood Angels opponent is bringing Terminators so perhaps autocannons is not a great choice here as they won’t be that effective against their incredible armour save. Lascannons perhaps instead?

My original list contained two Basilisk artillery pieces but we have been playing some fairly building heavy boards recently with little in the way of open ground so a Basilisk could be made ineffective relatively easily. Instead I went for a single Leman Russ Punisher which I love and it has proved a really handy piece of kit in the past. Its very satisfying glancing to death a vehicle with one of these! It also has heavy bolter side sponsons and the front mounted lascannon. This Russ might be worth a punt at those Terminators.

A single Hellhound is my only Fast Attack choice, in the ruined streets that inferno cannon is going to flush out Tau and Kroot troops from objectives. The ability of the torrent weapon, to place the template 12″ away, is going to be really handy in the narrow corridors of a 40K city. I will be glad of the side armour of 12 I am sure.

Again a single choice for Elites, 5 Ratlings. I have had these models for a while and I have yet to use them – so its about time I put them through their paces. Their Shoot Sharp and Scarper rule may some in handy for getting shots off down streets then running back into cover. Of course all that can be undone by the Tau’s ability to jump about the board so freely.

The Tau seem very light on specialist weapons amongst their regular troops, for example they don’t bring flamers or melta-guns as part of a Firewarrior squad. This means the Precision Shot special rule is rather wasted against them. However I highly expect my Blood Angels opponent to bring special weapons and specialist war gear, so these Ratlings may be able to pick off those specific models.

Nothing special here I am afraid, a single Company Command squad with a Vox Caster and a Medi-Pack. I want to keep these guys alive and in the back throwing out orders to their subordinates.

It could all go wrong! I would love to get your comments and suggestions on this list. Look out for photo updates of the game on the evening of Tuesday Jan 6th – on my Facebook and Twitter pages. I do not have particularly high hopes for this list as I do not know what my opponents combined forces are going to be capable of, its going to be fun though!