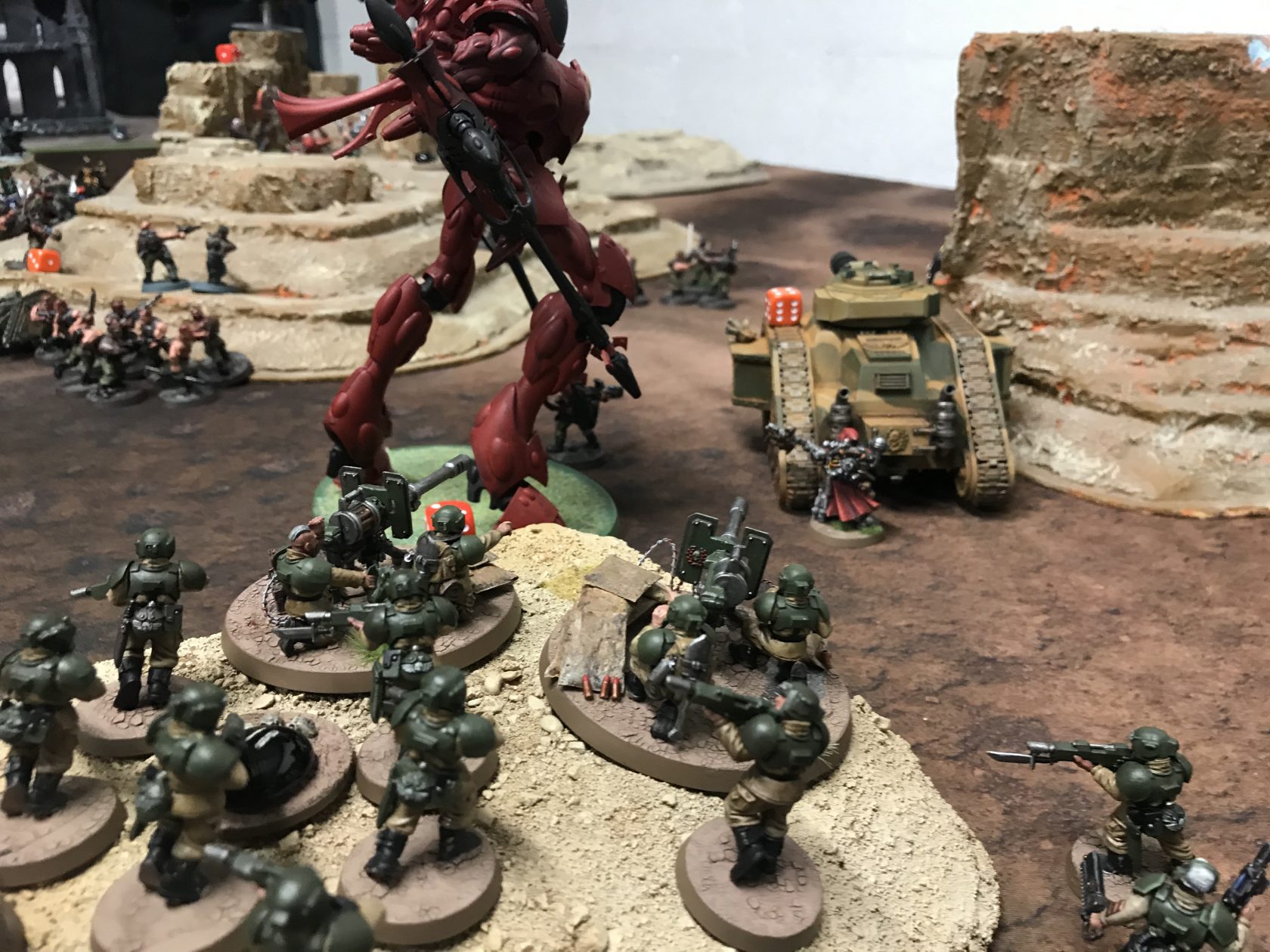 100 Astra Militarum Infantry vs Eldar with a Wraith Knight – 1,750 points

Today I bring you my second outing against John’s Eldar. We are playing 1,750 points again at Boards and Swords Hobbies. I won the last game so was expecting a more powerful list from John and I took 100 Astra Militarum Infantry.

I messed up this list. I wanted to take a Brigade of Catachans now that Chris from the Unrelenting Brush had finished my next batch of Catachan infantry.

But I didn’t pack correctly and forgot my three Catachan Hellhounds which would’ve been my Fast Attack option.

So I had to redo my list hastily to fit my Catachans into 2 Battalions. Here is what I ended up with…

This gives me nine squads of 10 models and then 10 Characters too. Although actually I think its 97 total because the Autocannons are technically one model, and not two! 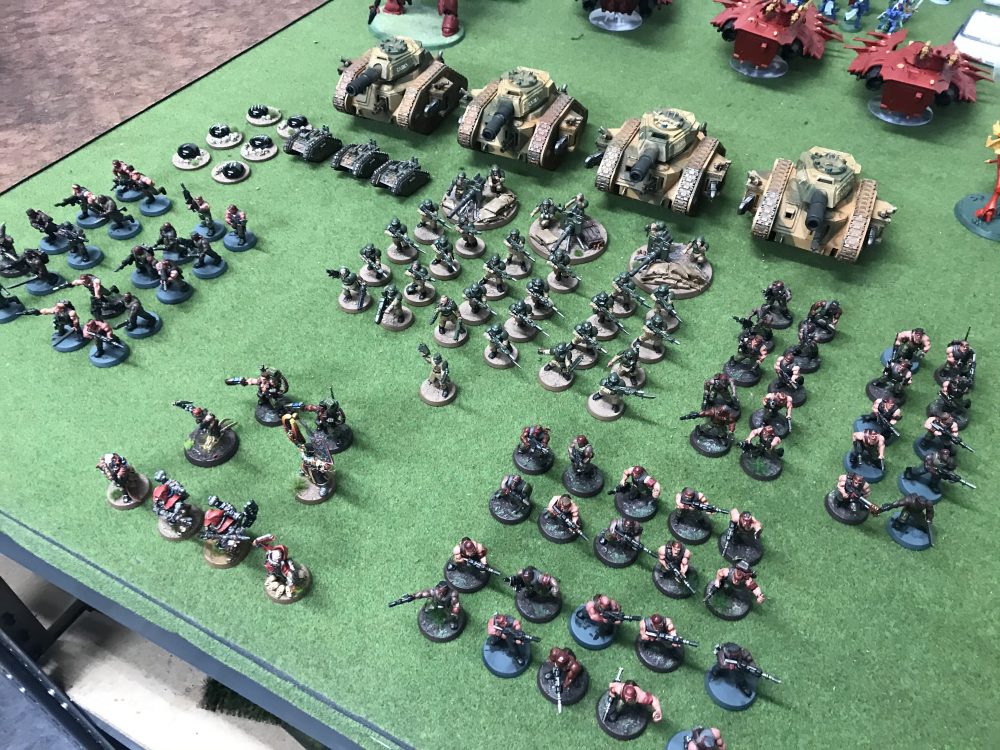 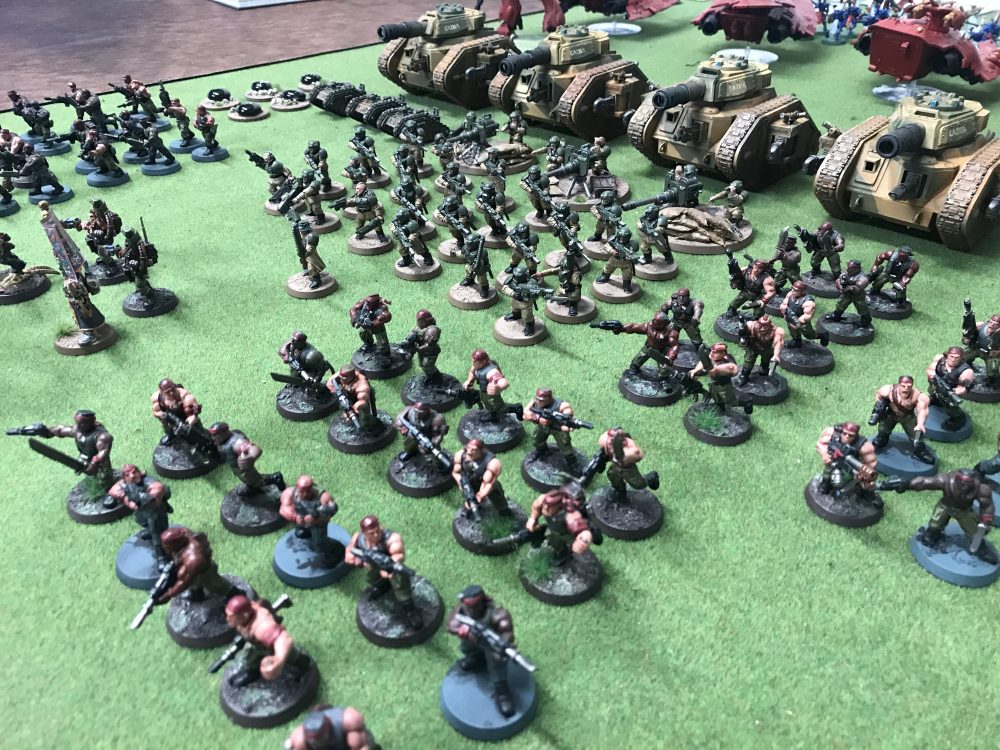 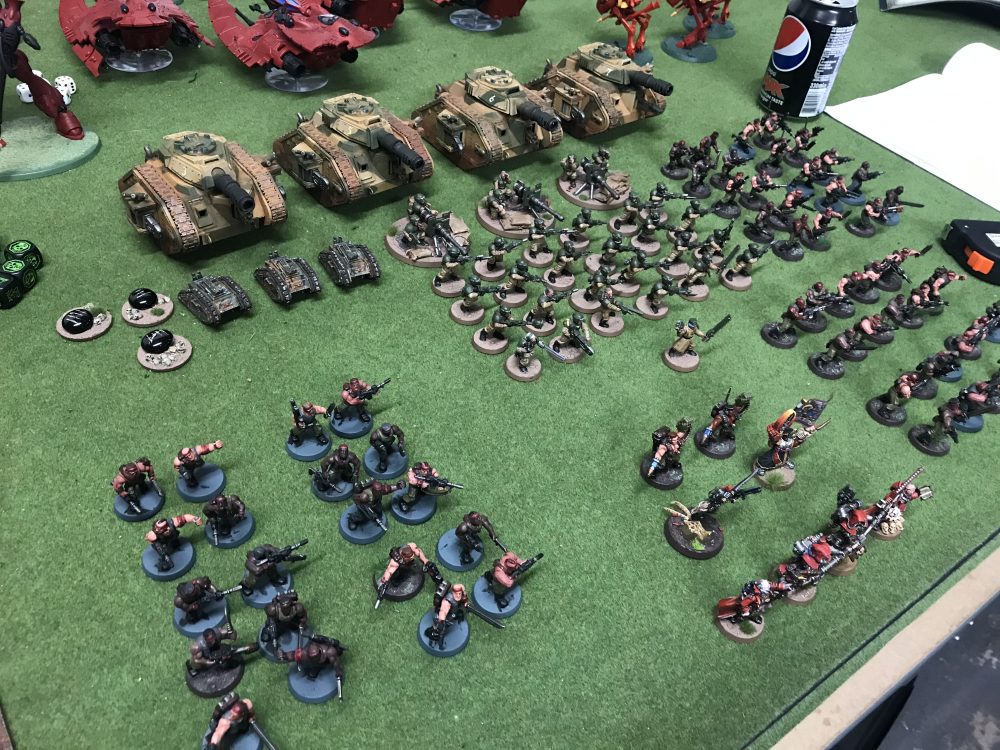 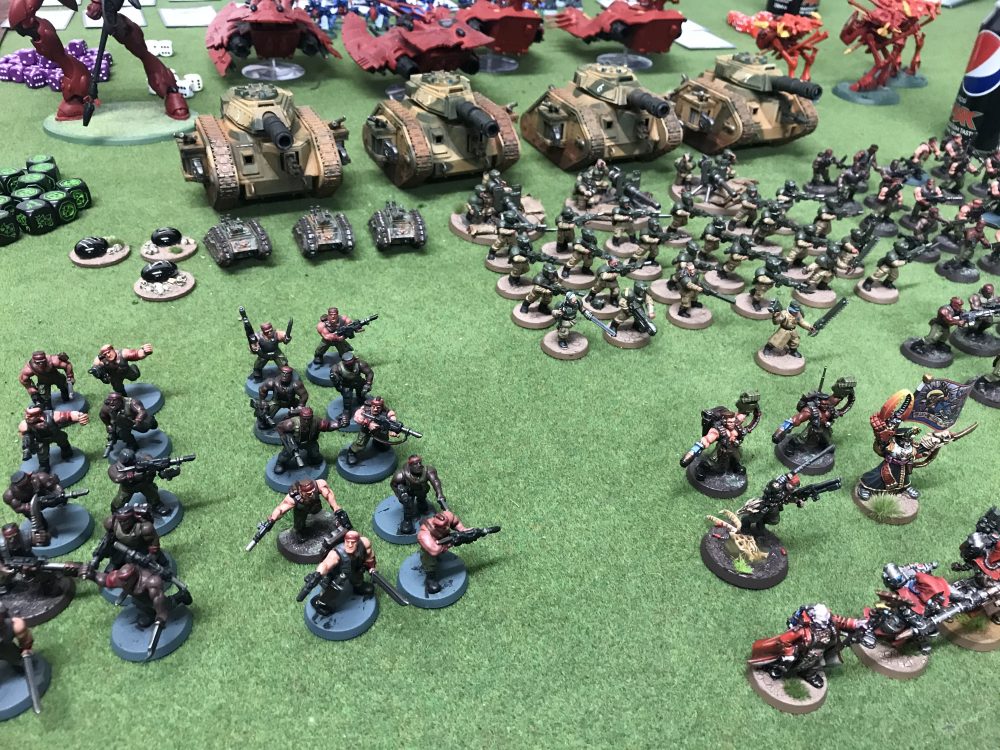 So a Wraith Knight, this will be interesting! I have never played against this model so I am unsure what to expect from this giant. 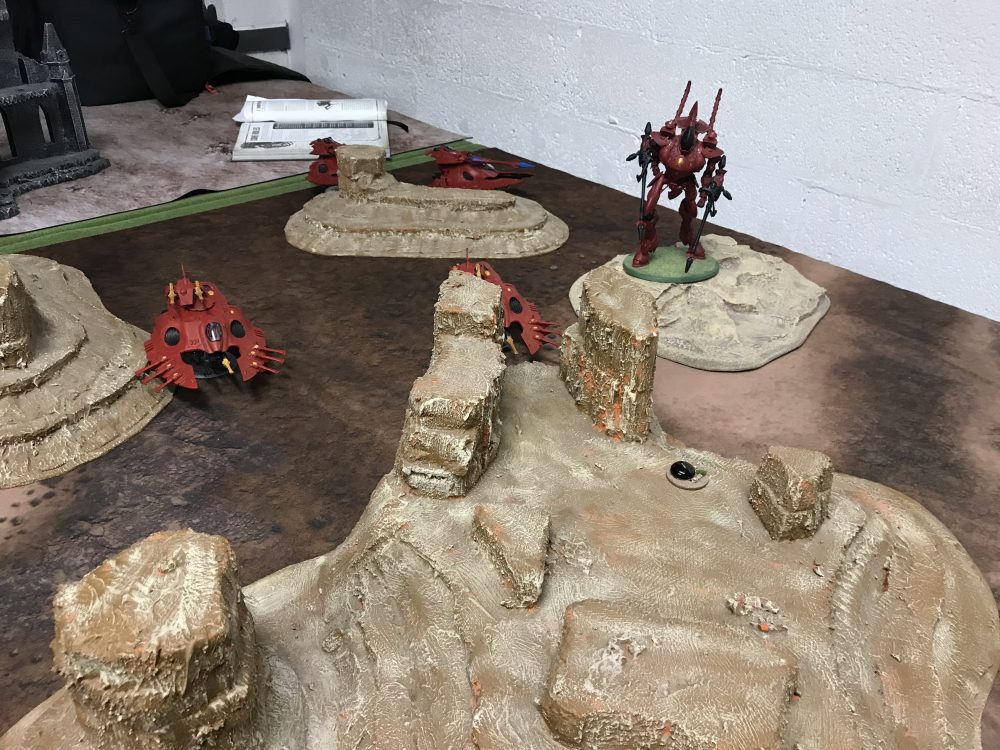 We first rolled Narrow The Search from Chapter Approved 2018. But this felt very unfair because I had over 90 infantry models. Narrow The Search has one objective in the centre that has a capturer zone of 18″ on turn one. Then 15″ on turn two. Turn three is 12″, etc. I’d be at a huge advantage.

So we re-rolled and got Beachhead. I’ve played a few times. I like it.

Three objectives, one in the middle and one placed by each player. From the start of turn two, the centre is worth 2VP. Your own is worth 1VP and the enemy objective is worth 3VP.

I deployed first and would, therefore, go first. It took me a while to get everything out and in place. My Catachans would run forward and screen my Cadian Infantry and my Cadian Leman Russ. My Characters would also run up too to buff my Catachans in melee and shooting. E.g. Yarrick’s re-roll of ones. I had no Deep Strike.

The Eldar had very little to deploy, just the Wave Serpents with their infantry inside, the Wraith Knight and two Fire Prisms. The War Walkers and Rangers would arrive later on. 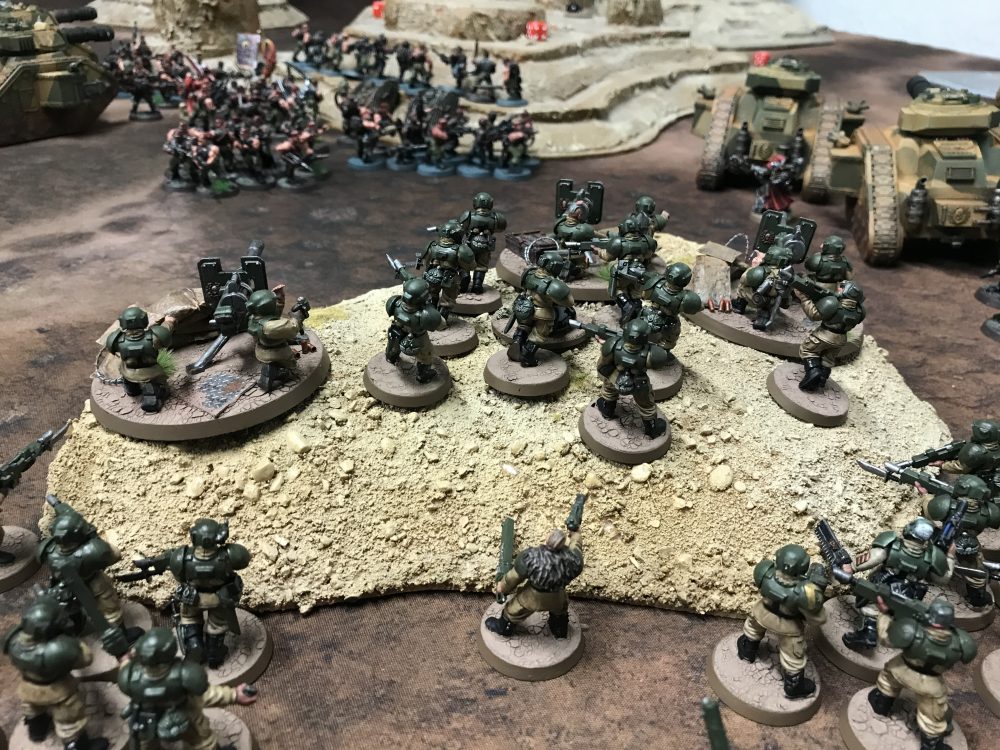 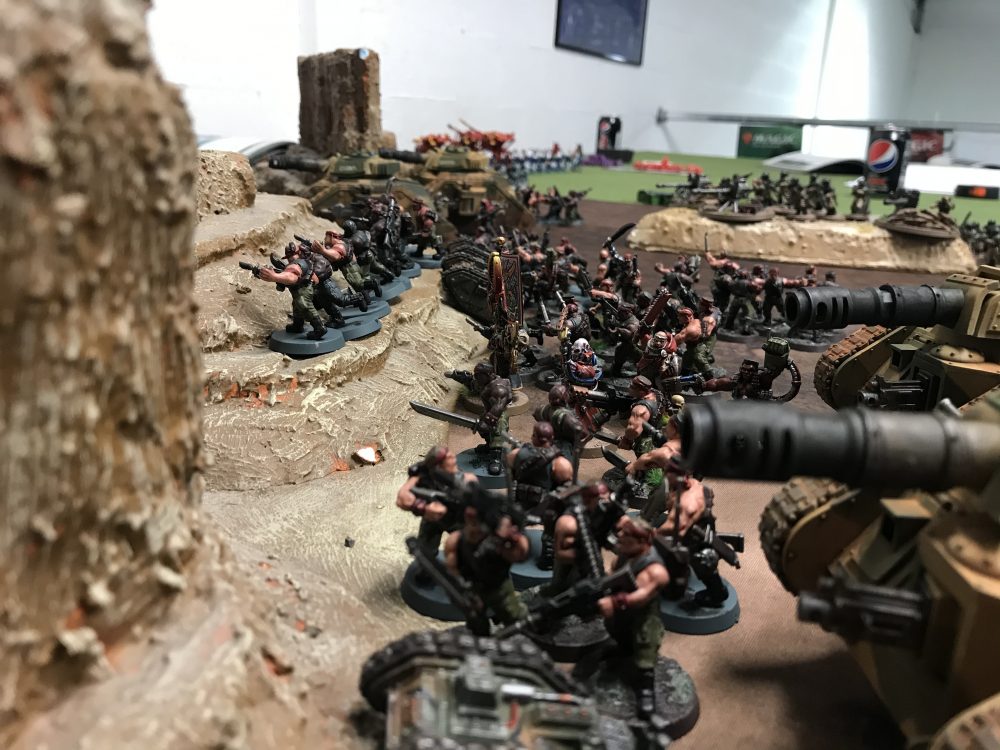 Catachans await the order to “go over the top” 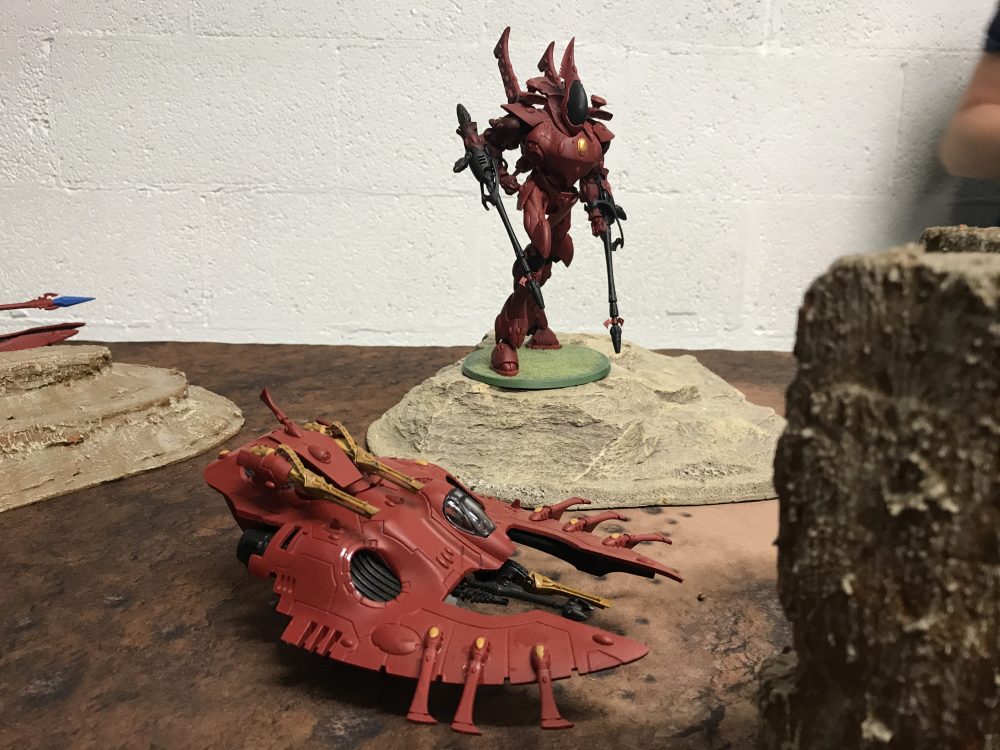 Eldar deployment was swift, to say the least

I lost first turn to Seize the Initiative – this felt like a major blow. But I managed to get away with this seemingly terrible turn of events.

I did lose one normal Leman Russ from the Fire Prisms that used Linked Fire – this was their First Strike VP. The Wraith Knight went for my single Tank Commander and did zero damage. I was extremely lucky here.

The Eldar used Fortune on the Wraith Knight which gave it a 5+ Feel No Pain type save.

But overall that could have gone a lot worse for me. A single unit of Dire Avengers disembarked and made their way towards the central objective but did not reach it. They did some wounds to a few Guardsmen, but nothing major.

Sorry, no photos from this first Eldar turn.

I threw all my Catachan forward to get to the centre objective and to act as a sort of range screen against the Eldar shooting. Although I did not commit as much as I should have done because I wanted to charge the enemy and shoot them. Bad decisions. Should have focused on getting more bodies onto the central objective ready for my turn two. I only managed to get one squad onto it, just.

My shooting was not that impressive but I did wipe out the Dire Avengers squad that had got out which gave me First Strike. This was a combination of Lasgun fire and a Leman Russ just opening up on them and overkilling them to ensure I got that first VP.

My Autocannnons plink some wounds off the Wraith Knight but no major damage is caused to him. He is still top bracket. 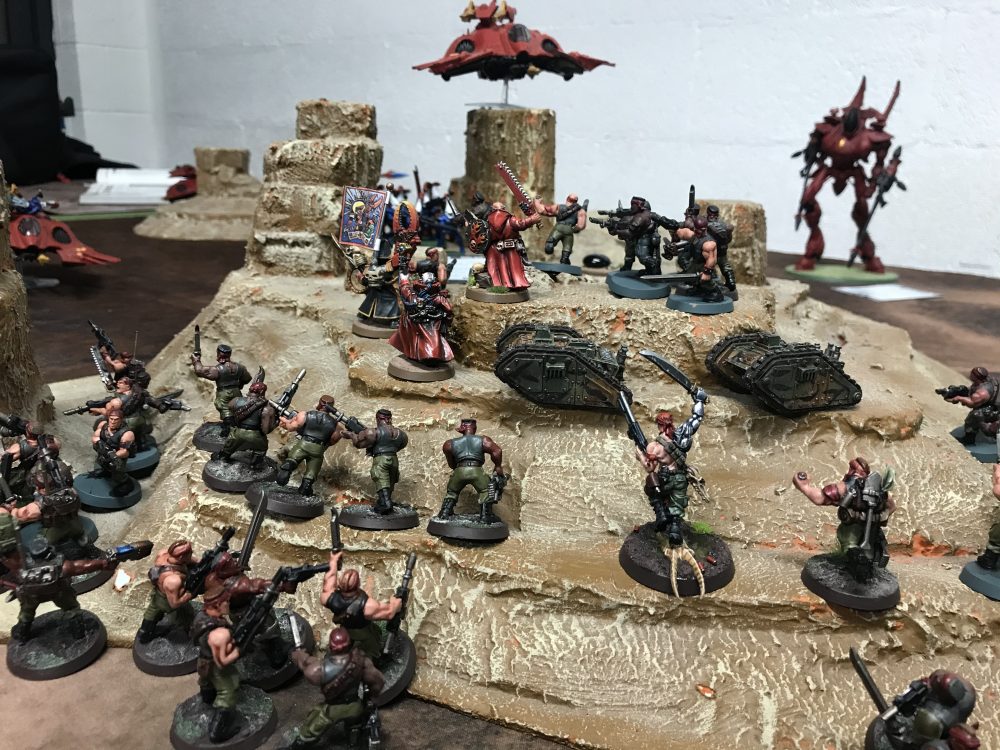 My infantry run to the top of the hill 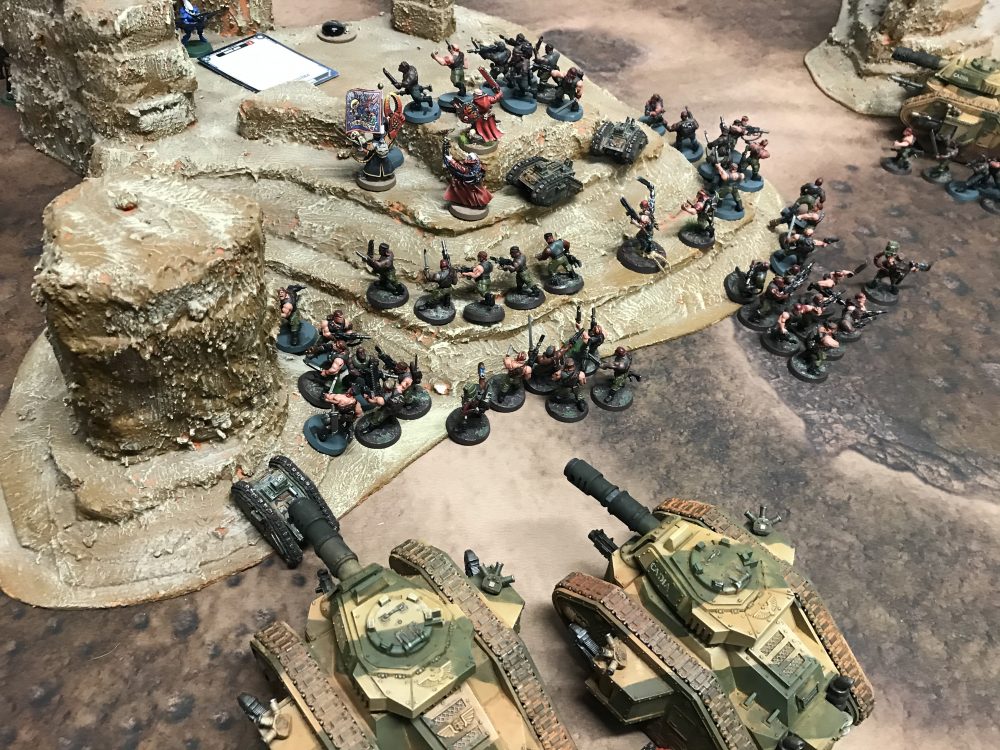 Overview of my frontline 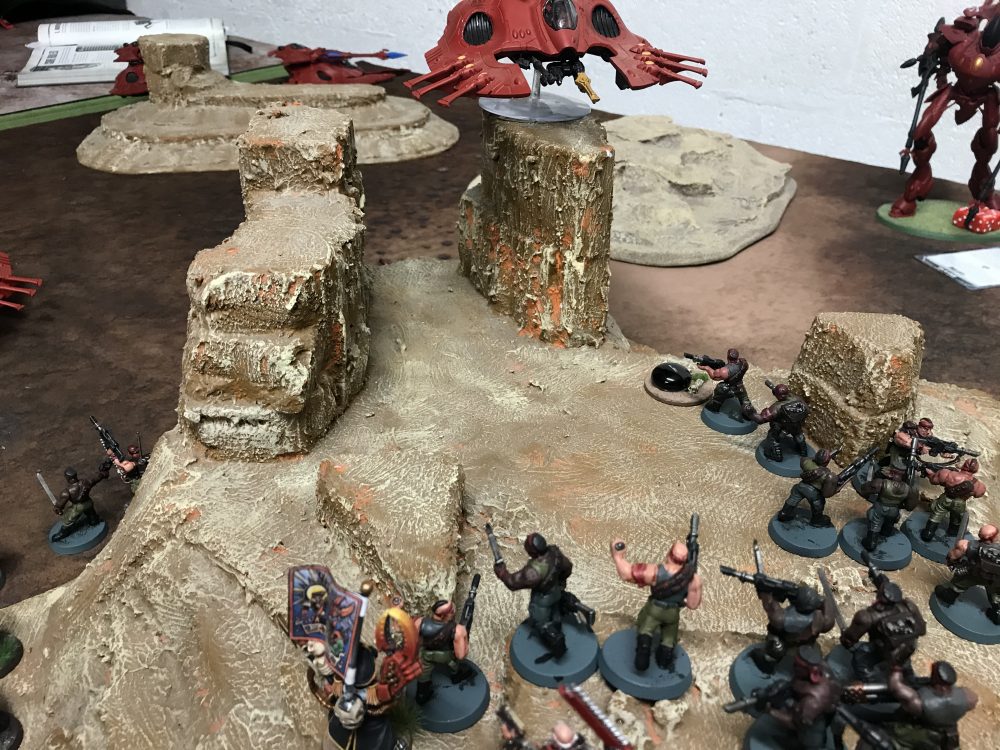 The Dire Avengers are dealt with 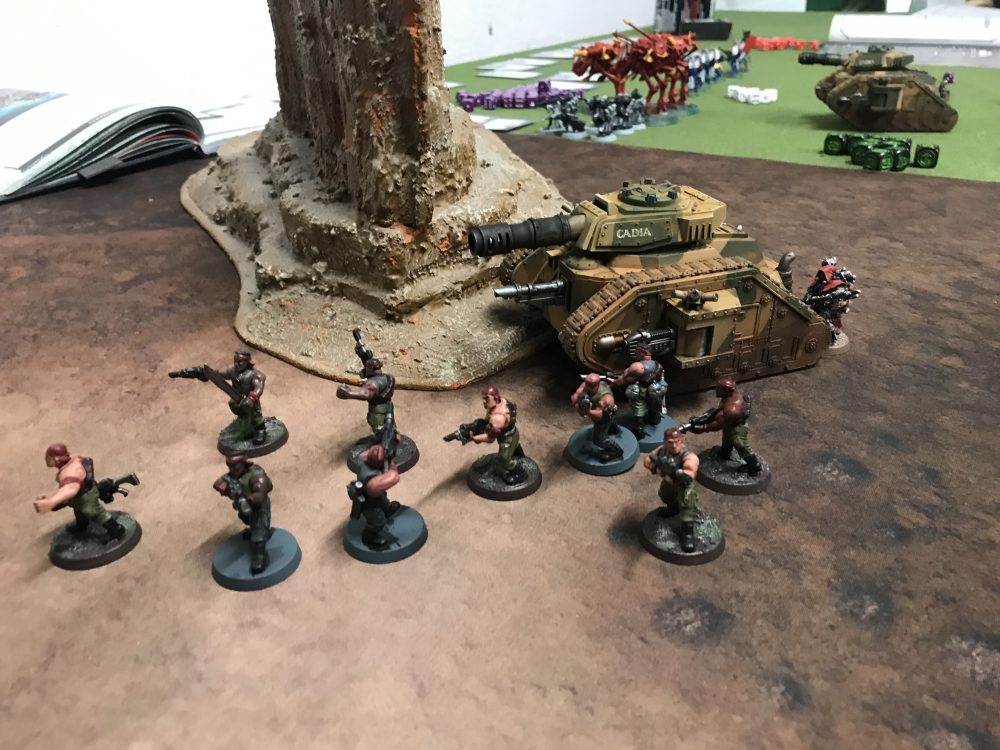 Screens move up and around 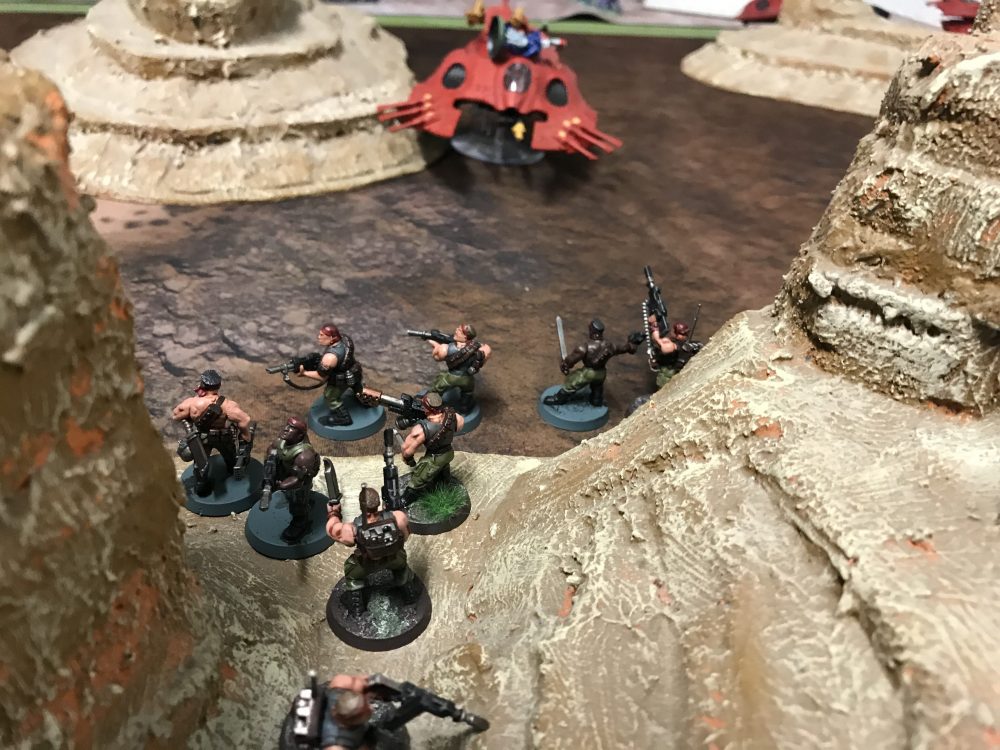 More Catachans move up on my left flank

The Eldar scoop a single VP from holding their own objective. They now set about trying to dislodge my single squad on top of the central objective. But do not! Luckily. The Wraith Knight shoots and does 4 or 5 wounds on my Tank Commander – placing him on the middle stats bracket. The Wraith Knight also charges my Catachans and kills a decent number.

The Eldar charge and shooting, however, fail to remove my models from the objective. The other unit of Dire Avengers disembarks and start shooting up more Guardsmen.

The Fire Prisms do not do a lot of damage despite using Linked Fire again. 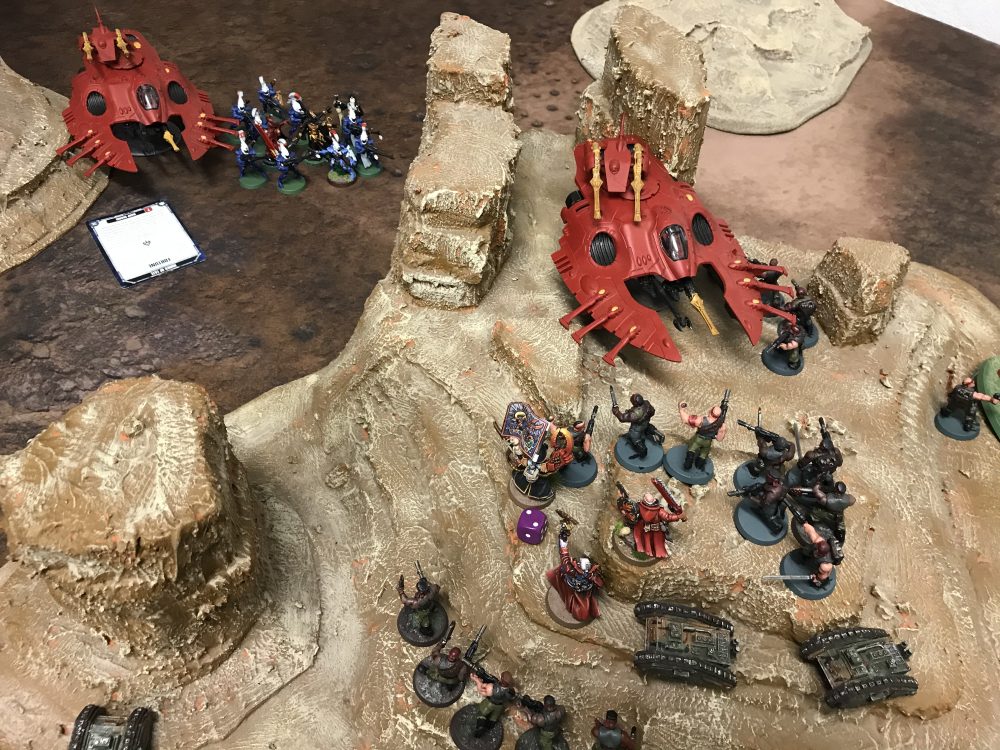 A Wave Serpent come in to get in my way 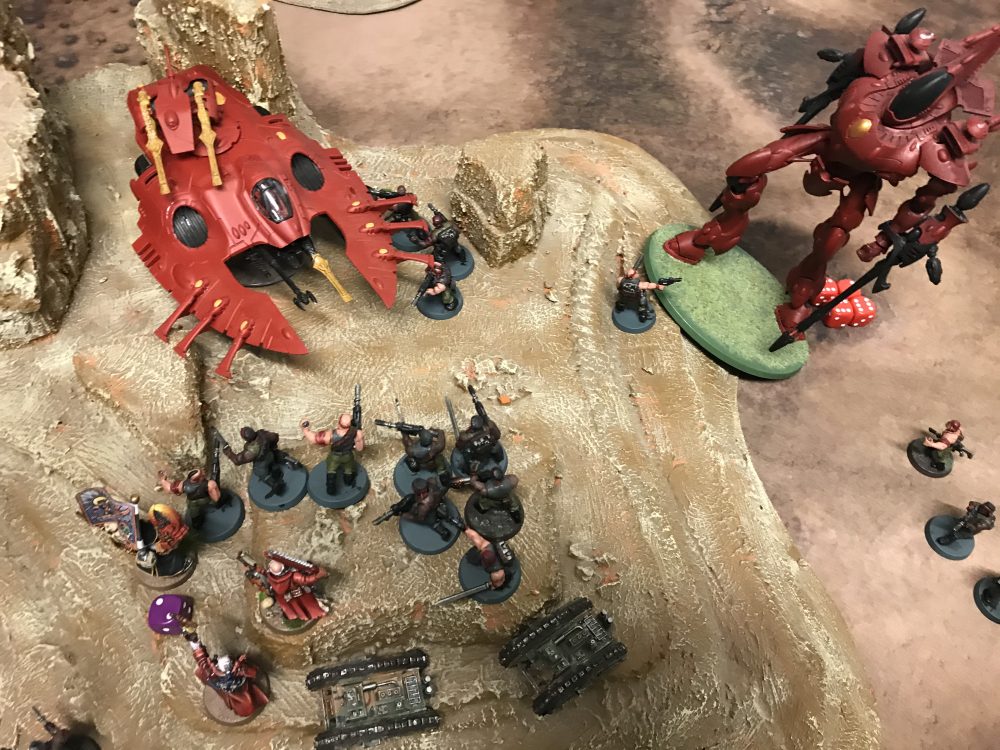 The Wraith Knight starts to move in

Having survived the Eldar turn I now had the centre objective and my own. This gave me an additional 3VP. With so many bodies on the field, the Eldar were going to struggle to take the objective by numbers. They needed to kill a lot of Guardsmen to stop me from outnumbering them.

I shot all I could into the Wraith Knight and got him down to his middle bracket. I also did the same to the Wave Serpent in the centre of the battlefield. Annoyingly neither died. This included throwing two Cyclops onto them. One of the exploded with a 1″ radius. I Command Re-Rolled it, for another 1″ radius. It hit my men and my other Cyclops – no enemy was hurt. I lost a few Guardsmen and a Cyclops in the explosion. This was bad! But sometimes that is just how it goes.

I charged the Wraith Knight to try and take off its last three wounds. I did one and it was limbing around on two wounds. The Wave Serpent was also on two wounds at this point after being charged by Straken, a Psyker, a Priest, Yarrick and a few Guardsmen. 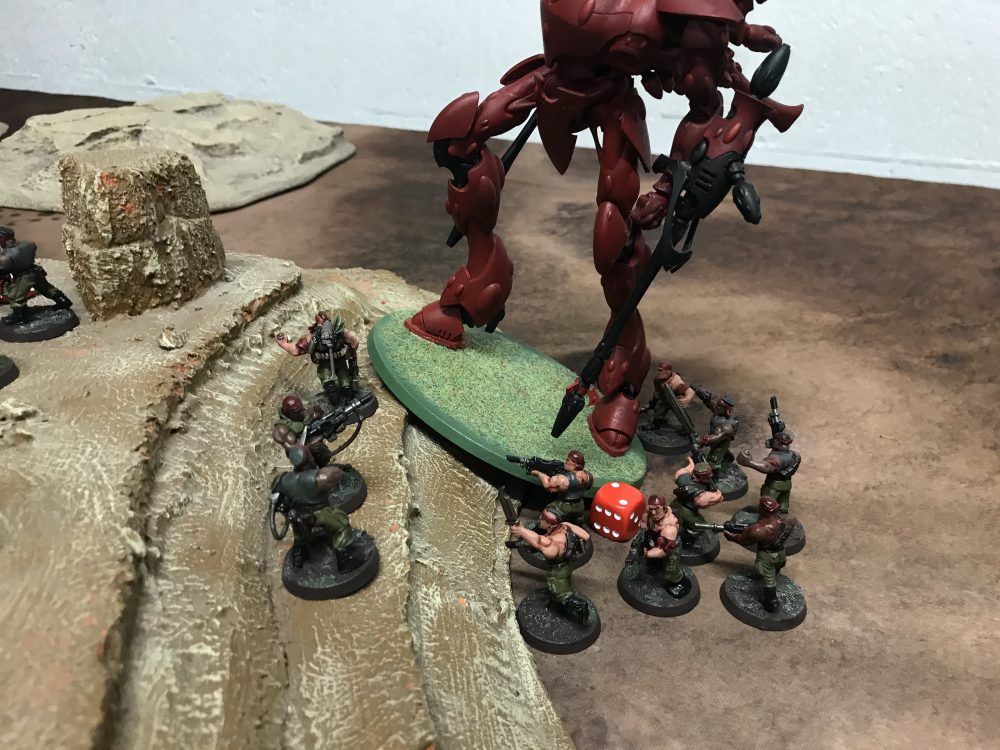 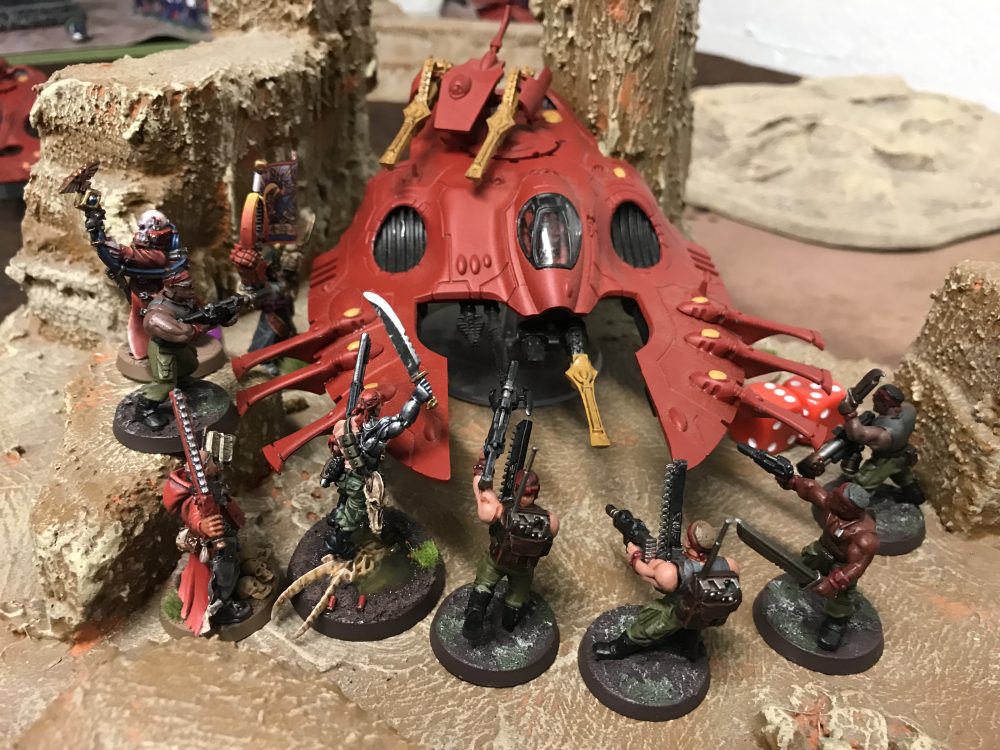 Much hull punching was had 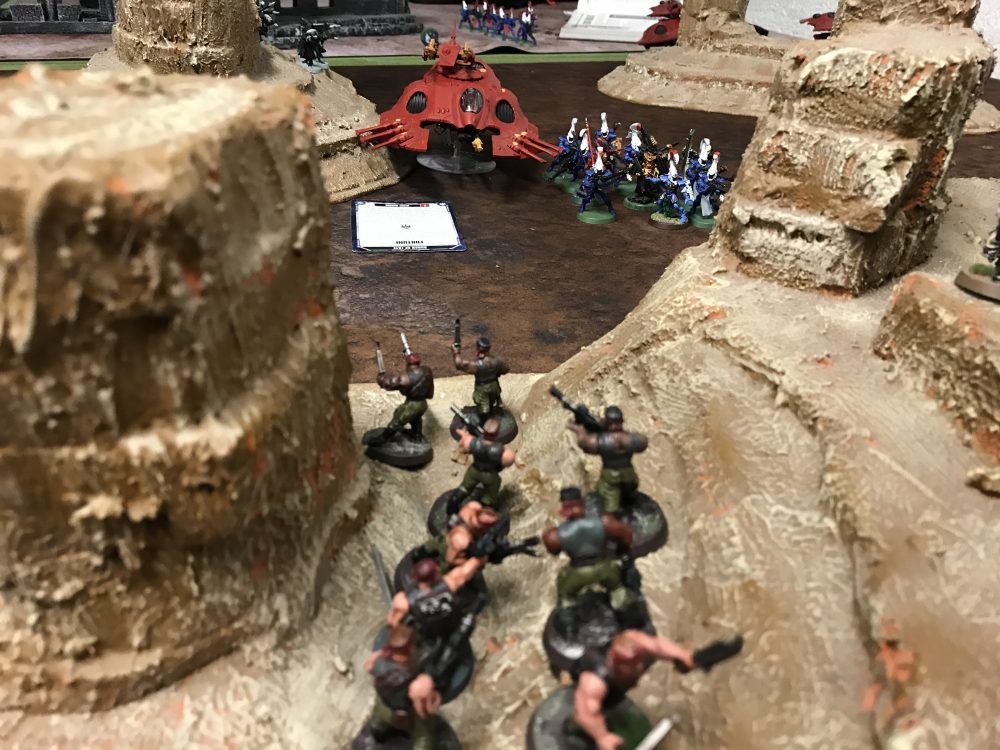 Guardsmen closing the gaps and moving up

With my Guardsmen well and truly in the centre of the table, the Eldar were struggling on VPs. They held their own which granted them 1VP.

The Wave Serpent and Knight withdraw. Although the Knight withdraws over my infantry and towards my backline of Cadians and my Tank Commander Leman Russ. The Knight easily kills my Warlord granting another VP to the Eldar. Yarrick is nealy killed from a Serpent Shield as he is now exposed in the table centre. But he lives on one wound.

The Wave Walkers have arrived now and promptly melta Guardsmen. There was not a lot of places for them to go and they could not easily make a move onto my objective. It had 25+ Cadians sitting on it. 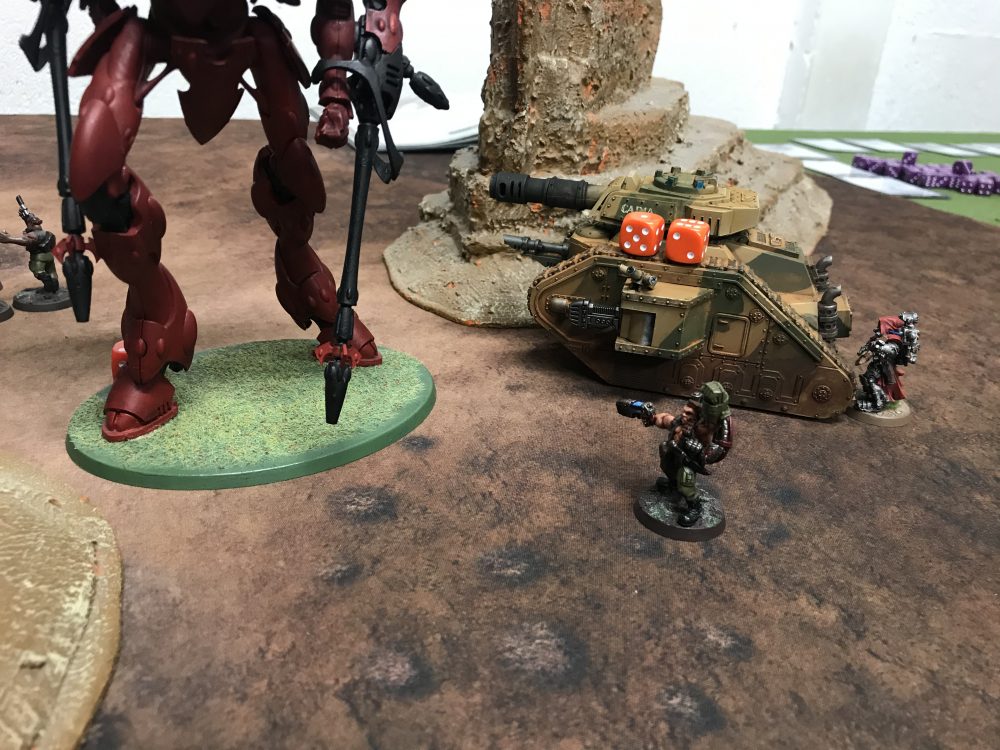 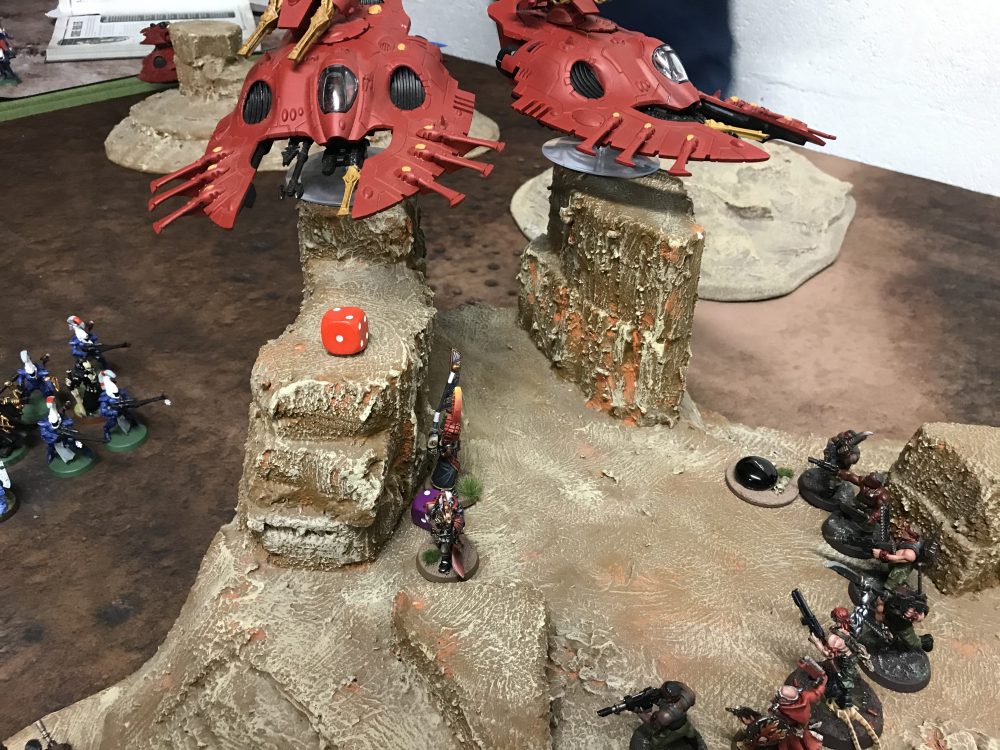 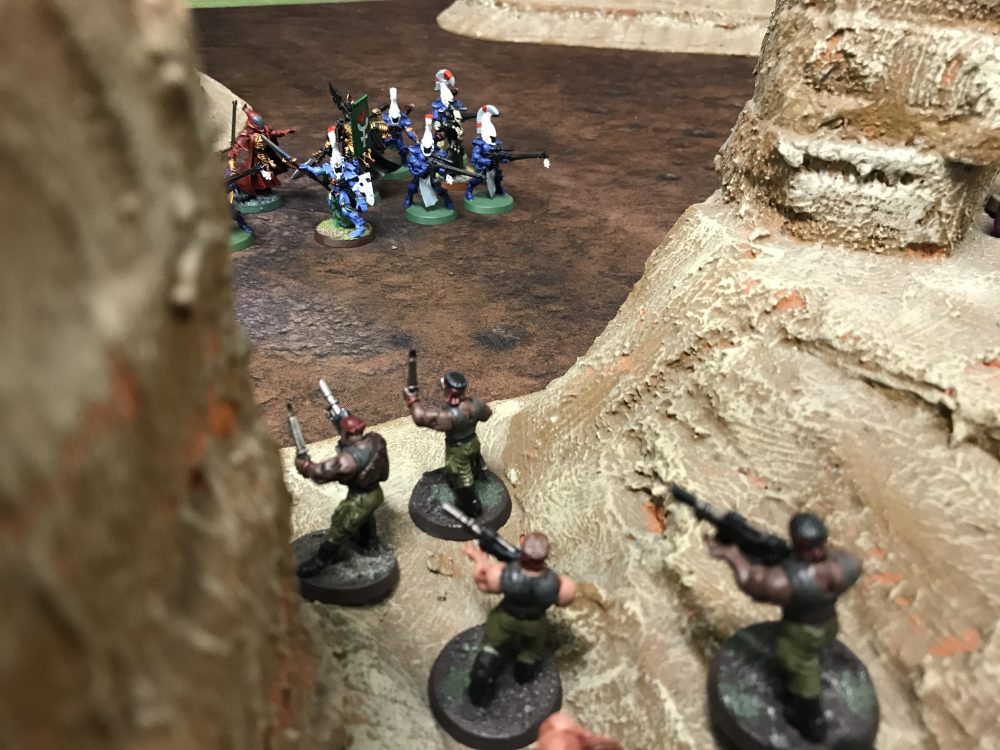 These boys are just staring at each other 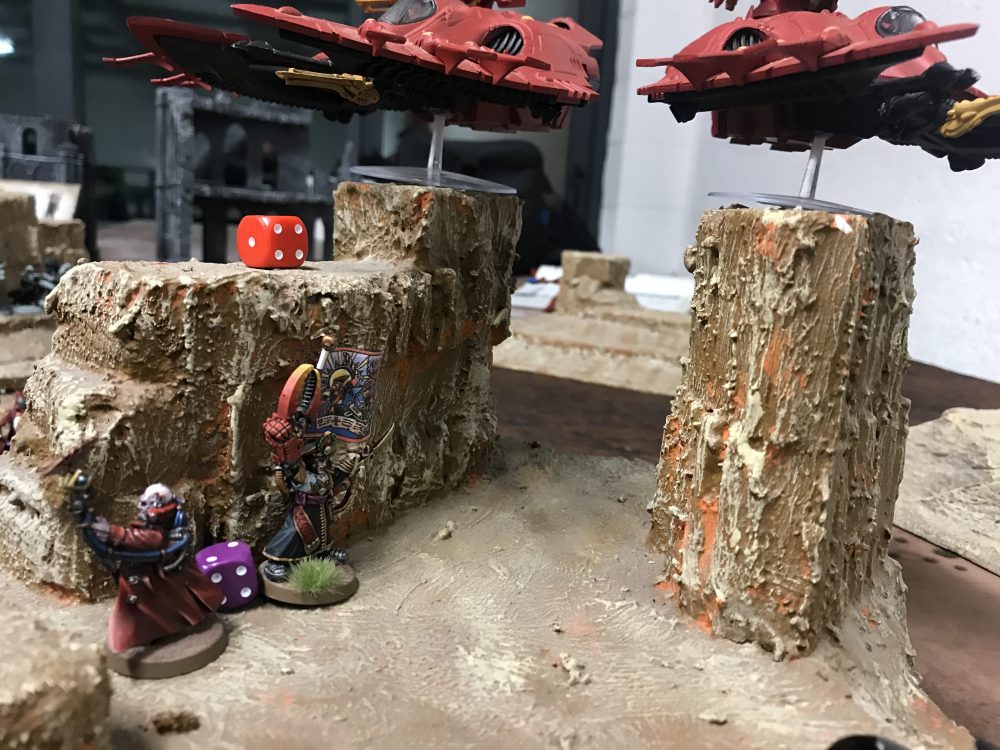 Yarrick cowers, but he is the closest unit

I still held the centre objective and my own – giving me 3 VPs.

I kill the Knight! And he does not explode which was good as he was now well into my backline of stuff. I also finish off the two wound Wave Serpent and then move everything close by onto the centre objective. This includes a few Guardsmen, Yarrick, a Priest, a Psyker and Straken.

With the wounded Knight and Wave Serpent gone I started to focus on a Fire Prism with my Tank Commander. He did OK and got it into its middle bracket with his Battle Cannon. 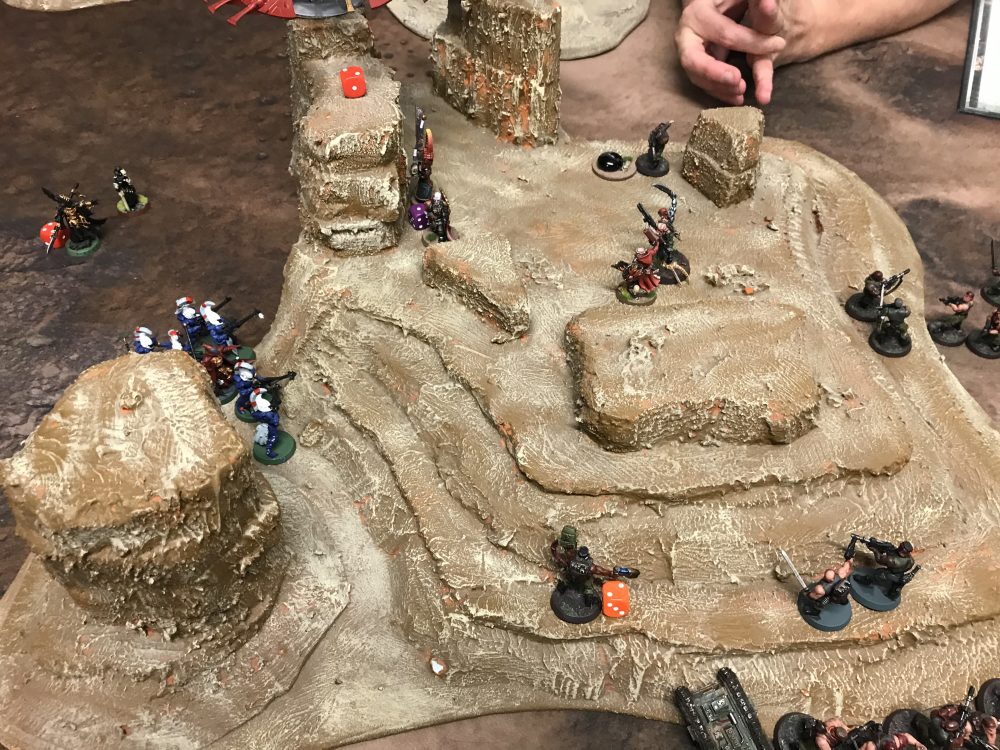 The battlefield at the start of turn 3 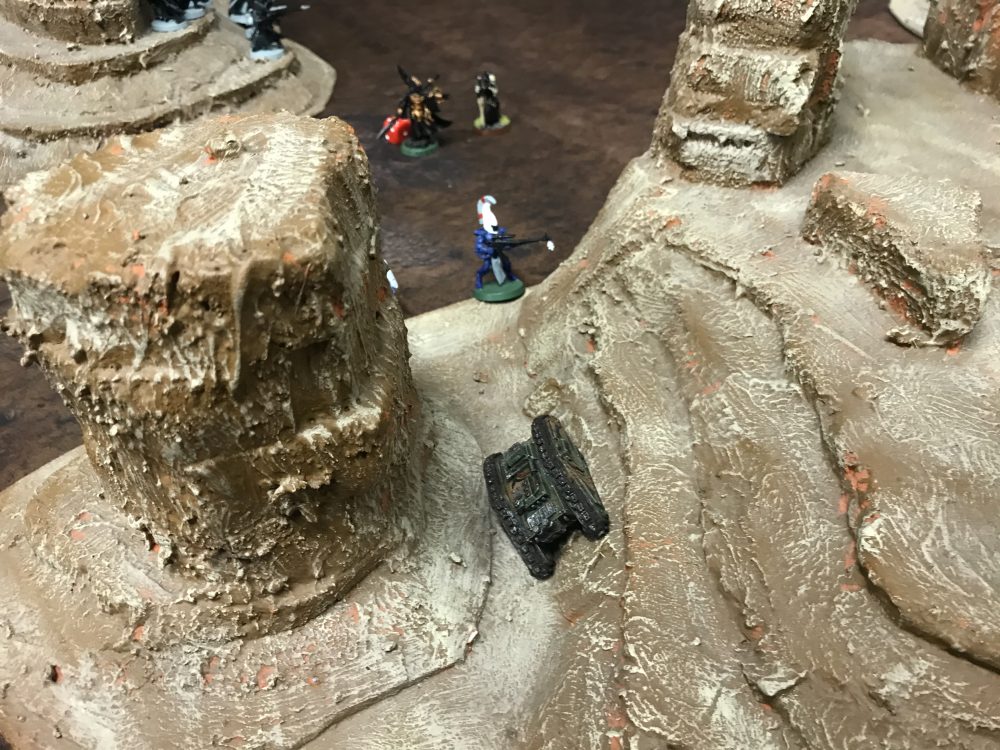 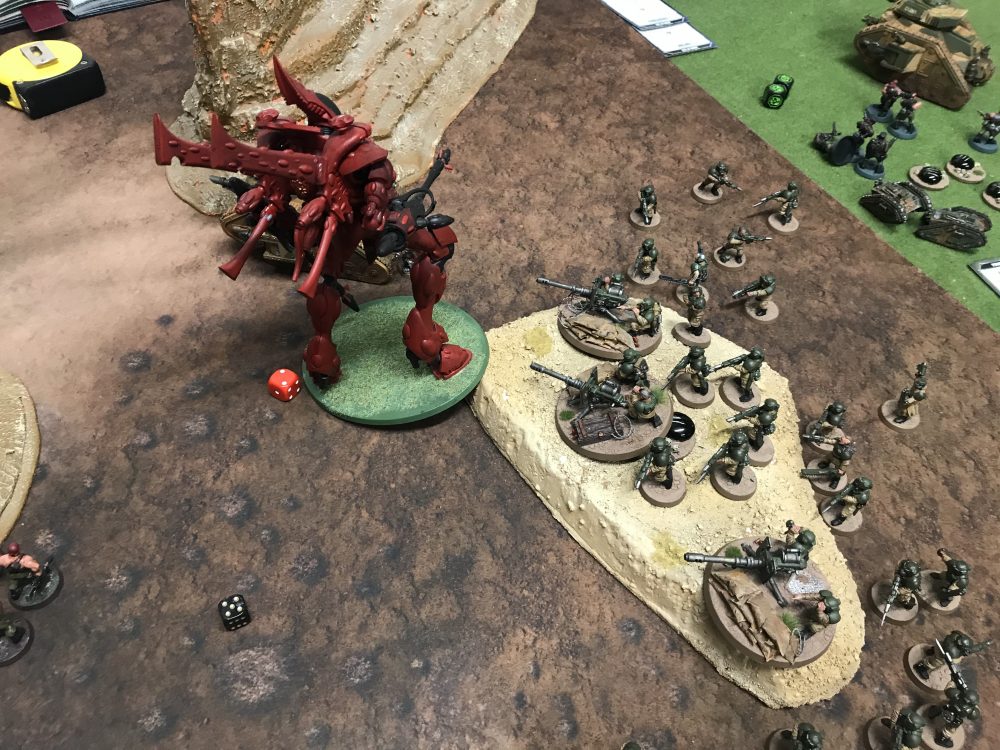 Knight trying to get into my back Cadian lines 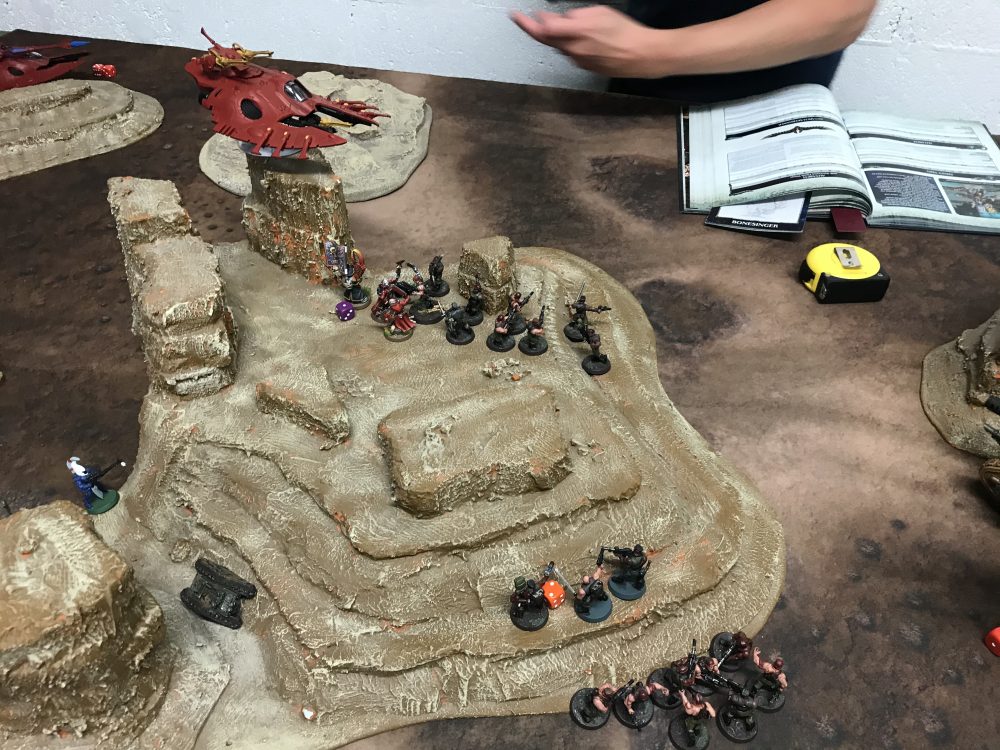 The battlefield at the end of my turn 3

We had to end the game here (due to time) and called this a Guard victory! We didn’t think the Eldar could pull this back. I had around 40 infantry models left, the Cadians were far away but easily movable with Move, Move, Move. I would have just kept the centre and gradually increased my lead.

The Eldar had lost their Knight and were unable to make an impact in the centre at this point. I still had three Leman Russ and both Tech-Priests so they were gradually being repaired as the game went on. It’s remarkably effective.

Killing the Knight where it was also denied the enemy Line Breaker.

Another match will happen soon! 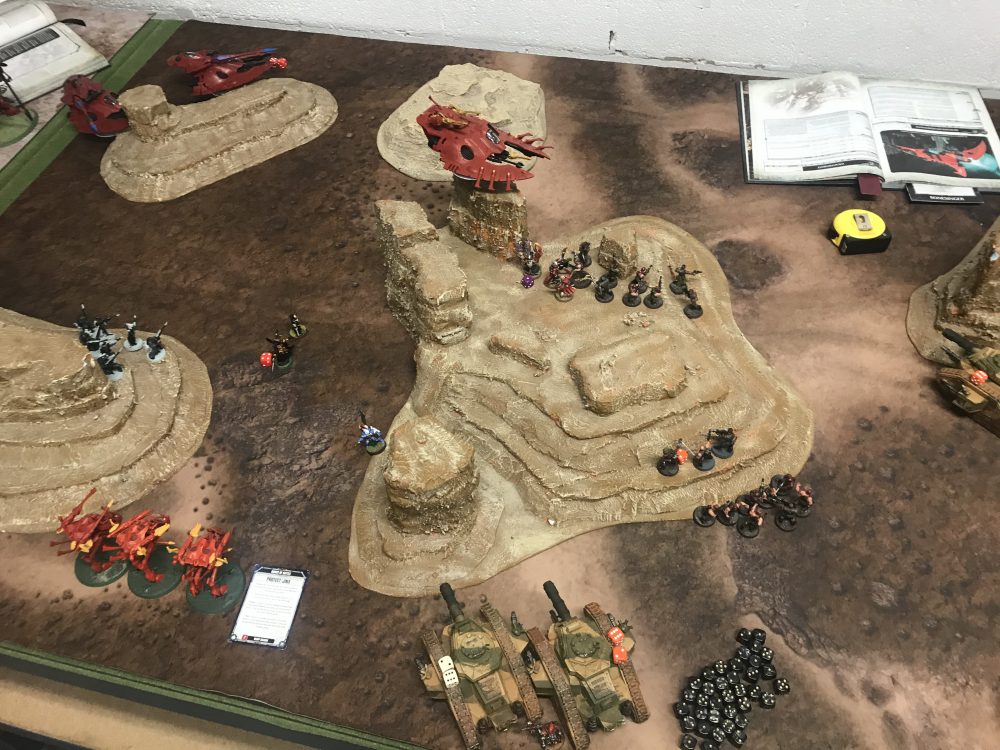 Left side of battlefield at the end of the game 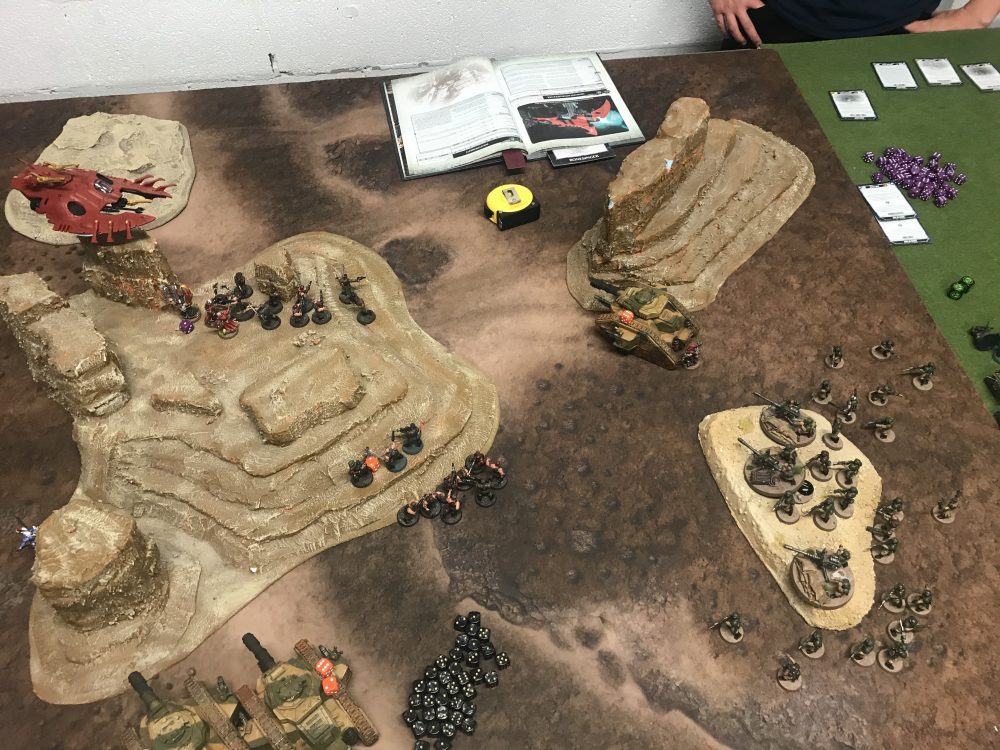 And the right side